This is part two of the ‘Allrad E30’ which you can find Part I Here.

I never quite explained where the ‘allrad’ name of the last article came from. Allrad is an abbreviation for the german word, Allradantrieb, meaning all wheel drive. And the 325iX became BMW’s first venture into the all wheel drive market. Four driven wheels on a BMW is not surprising in 2014, but thirty years ago a BMW was expected to have its powerplant in the front and its drive wheels in the back. 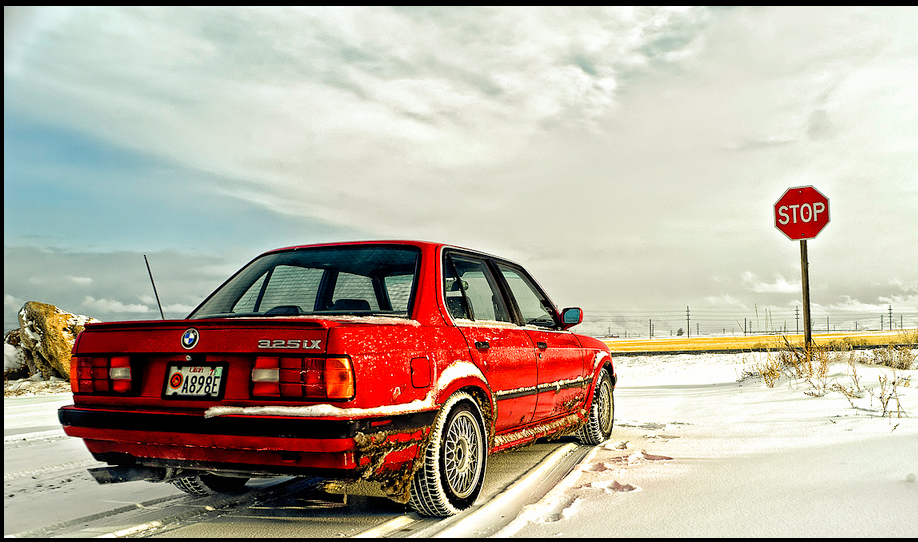 In case you missed the last article, the 325iX was introduced in 1985 in Europe. It was powered by the legendary BMW m20 inline six. The m20 features a single overhead camshaft, motronic fuel injection, 12 valves and 2.5 liters of fury that produced 170 horsepower (don’t act like you’re not impressed). It was introduced to North America in 1988. 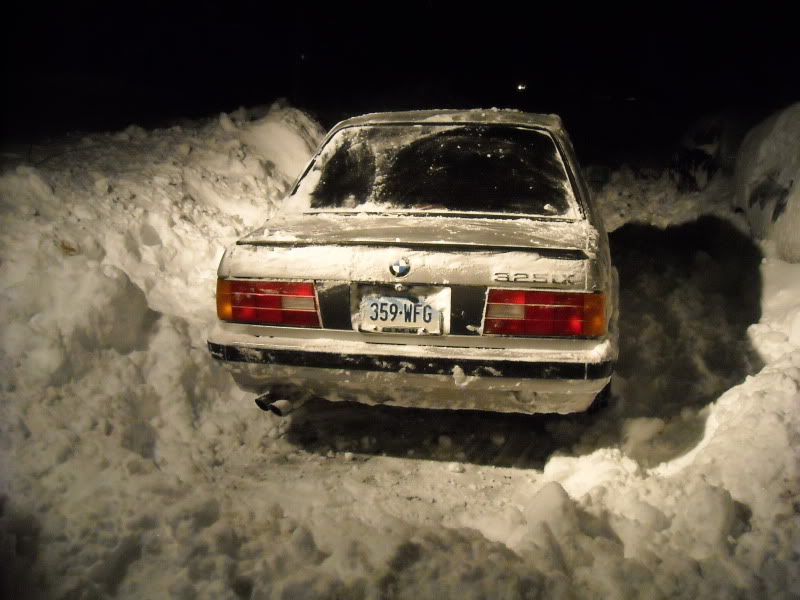 All in all, only 6,346 iX’s were sold in North America, but some of the earlier European models have made it across the pond. Below will detail some of the minute differences between the two models and a few other special models. Most people did not realize an all wheel drive model BMW existed in the late eighties and even fewer still realized there was an early model and a late model 325iX. The US iX’s were only late models and employed Bosch Motronic 1.3 fuel injection with a 55 pin ecu, 8.8:1 compression ratio, and an oxygen sensor to control emissions. The ‘euro’, or early model, iX was only offered in Europe and Japan was powered by a 35 pin Bosch Motronic 1.0 ecu, usually used on the 325e (‘e’ denoting the greek letter eta translating to efficiency) model. The ecu used was a rare last three digit ecu ending in ‘073.’ This ecu has the 325i fuel and timing curves integrated into the 35 pin ‘eta’ model ecu. Without an oxygen sensor or other emissions equipment, this model was said to feel faster on the butt dyno. The engine produced slightly more power with a 9.7:1 compression ratio but was only rated 1 horsepower higher from the factory. BMW is known to underrate some of it’s models’ engine output to make other models look more appealing. 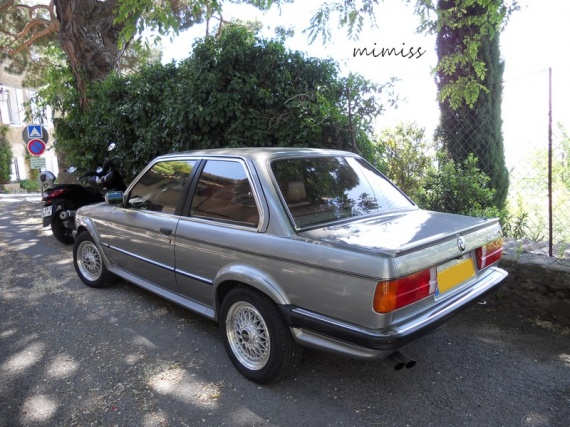 The water pump used the early style pump to circulate coolant to the early style radiator. ABS came standard on the euro 325ix, along with power windows, sunroof, disc brakes, rear headrests and a pass through ski bag. Features available on the allrad were also available on the 325i, such as the 13 button on board computer, cruise control, recaro sport seats, and air condtioning. 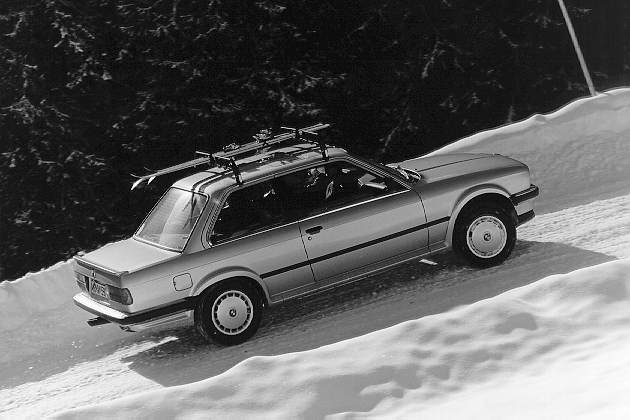 The noticeable difference between the euro 325iX and the american model is distinguishable to the naked eye. The early models received appealing body-hugging chrome bumpers rather than the protruding ‘diving board’ bumpers or the body colored plastic bumpers. Four door allrad’s were introduced with the early models though not introduced to North America until 1989.

The 325iX is known for its aggressive mode specific fender flares and the early model has a slightly different style of flares. The flares are more flat than sculpted over the wheels and have three lines running parallel along the door sills. The front valence is also the same as the early model rear wheel drive counterpart with two tow hooks up front built into the frame rather than a single hook that threads into the front bumper. The early models have chrome stripes in the side molding rather than being all black. 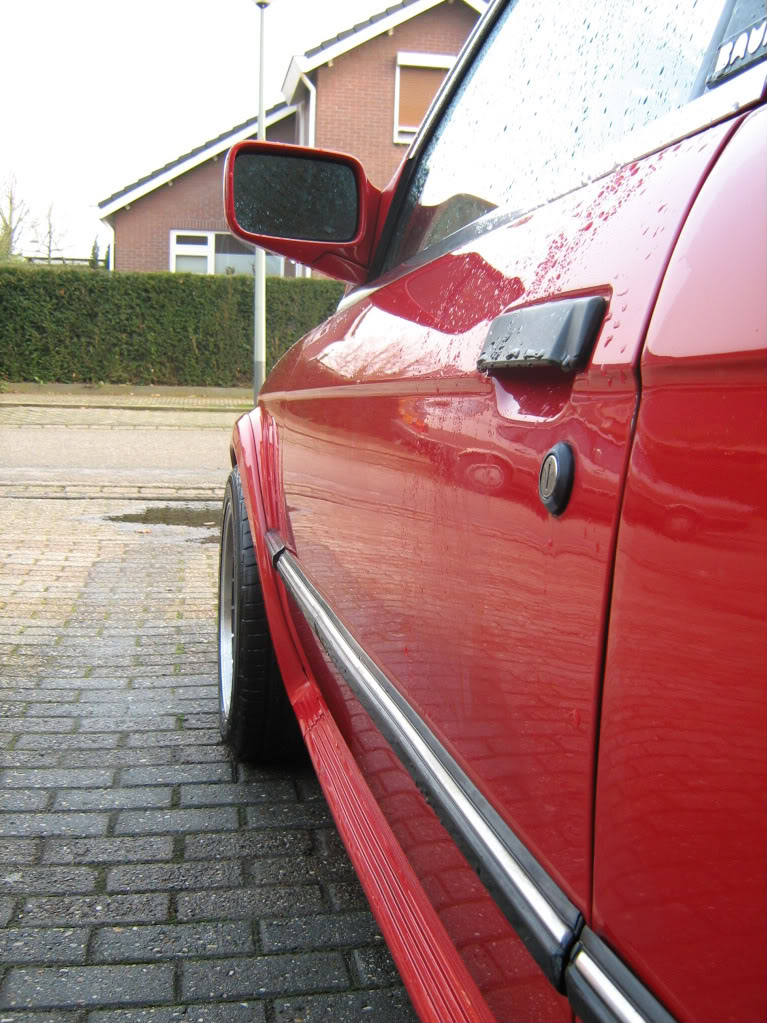 The final difference between the american and euro models was the final drive ratio. The american manual transmissions came with front and rear viscous coupling differentials with a 3.91 gearset. The american automatics came with 4.10 viscous coupling differentials. The euro 325iX’s came with 3.64 viscous differentials which were better suited for the autobahn in the manuals, and supposedly 3.73 gears in the automatics though these are probably rusting away in scrapyards somewhere in Berlin. A true euro 325iX would have needed to pass the federalization inspection to be imported to the United States. I personally know of 2 of these examples in Colorado, but there could be more across the nation. 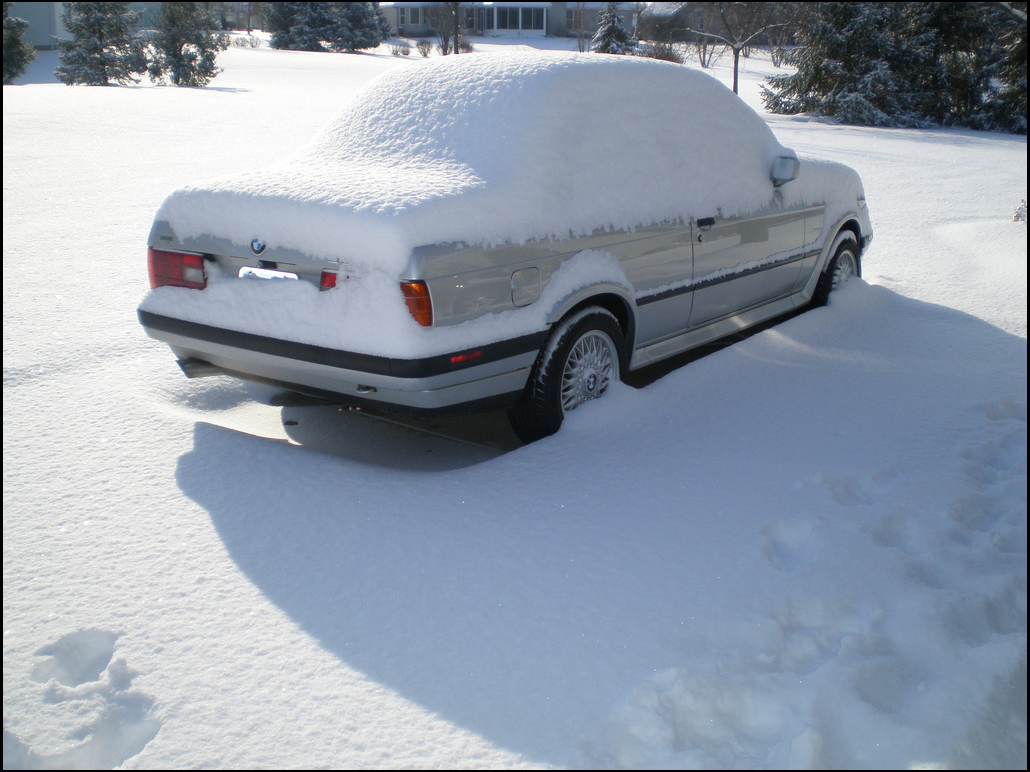 A few other unique 325iX’s came to fruition. One of these is the 325iX Baur cabriolet. This cross breed was a byproduct of a 325iX mating with a convertible. The frame of the roof was still intact, but the windows, sunroof and rear window were fabric and could all be removed. It truly was an all weather vehicle, allowing the top down for a day of sunshine, and all wheel drive for that unexpected storm. Baur had been modifying BMWs since the BMW 2002 and was the closest one could find to a convertible until BMW offered it as a separate model. Total production numbers put the 325iX Baur at 118 examples. 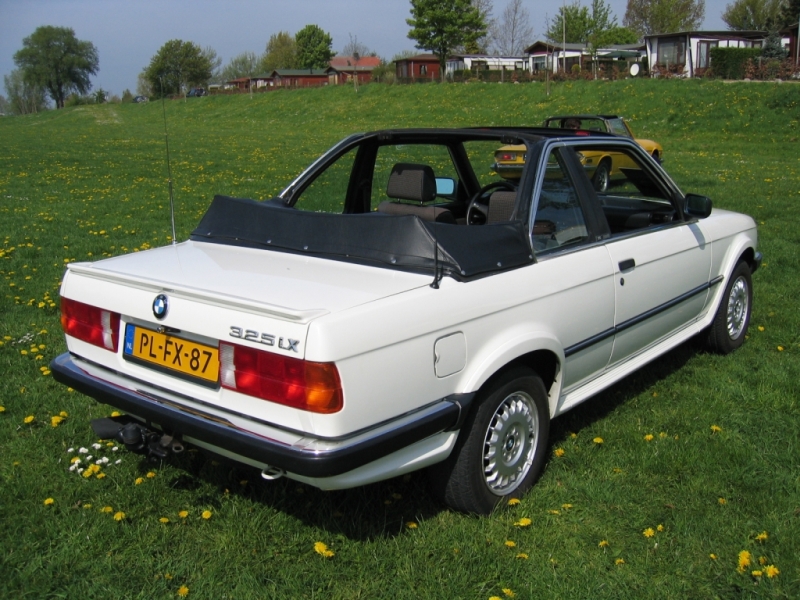 The Baur iX was offered on the early models and was not sold in America, so this evolution is basically extinct in today’s automotive landscape. With the top down and all wheel drive, this car was truly ready for anything. 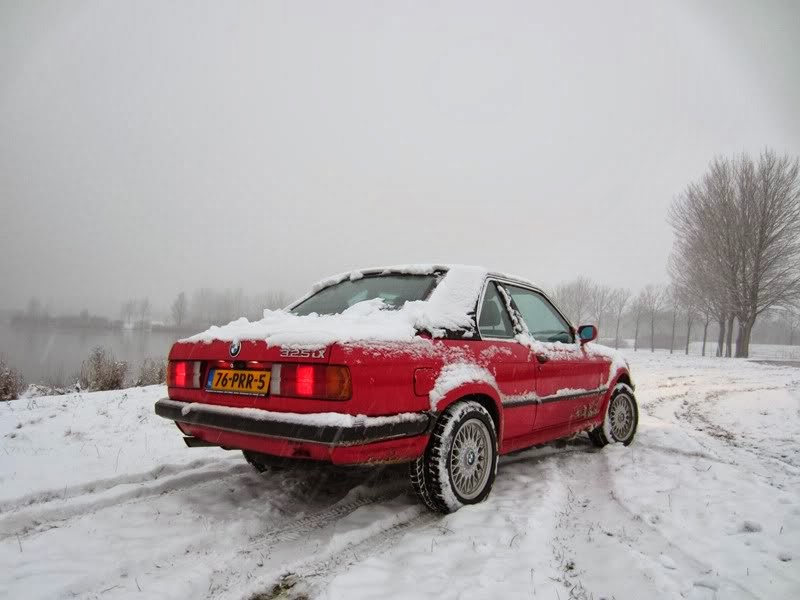 Almost thirty years later, it is unknown how many are left, but a single owner in Europe owns both the red and white examples pictured above. 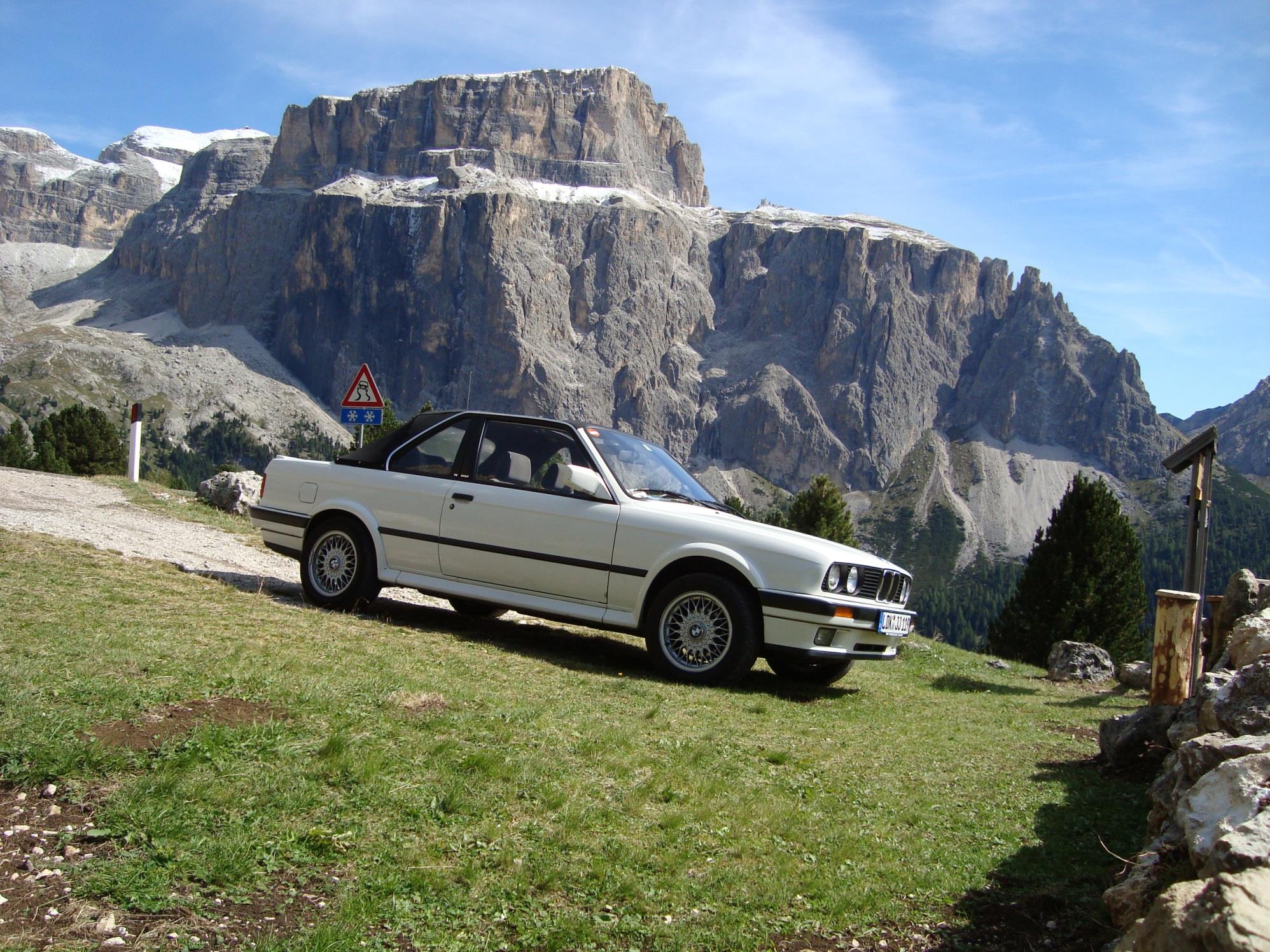 The 325iX touring is another cult classic deviation from the standard 325iX. It too was not sold in North America, but is a favorite among enthusiasts due to the added space in the boot. Some say the touring iX is the pinnacle of the e30 chassis due to its practicality in all situations. The touring sold in great number in other markets and are somewhat common overseas. 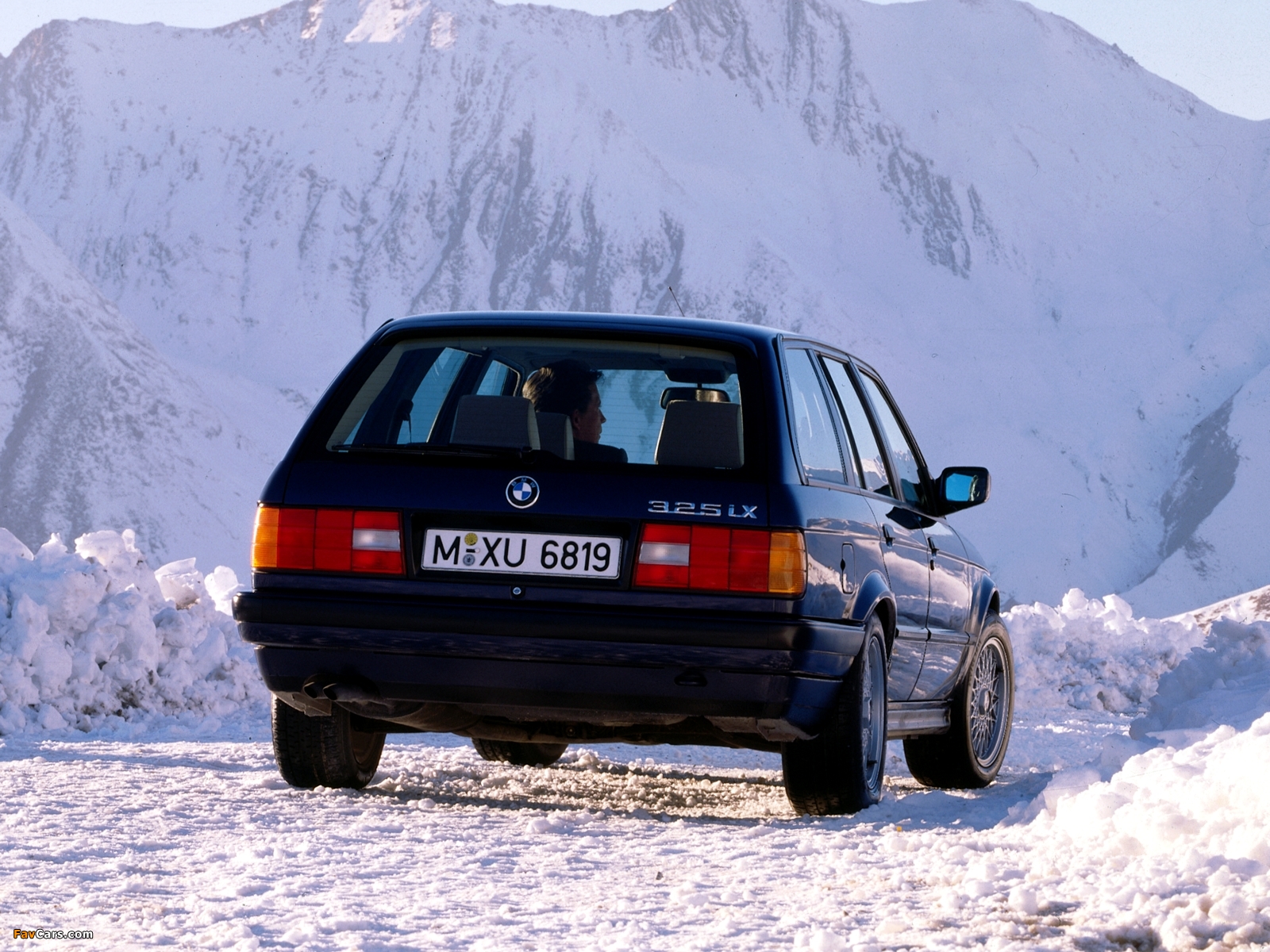 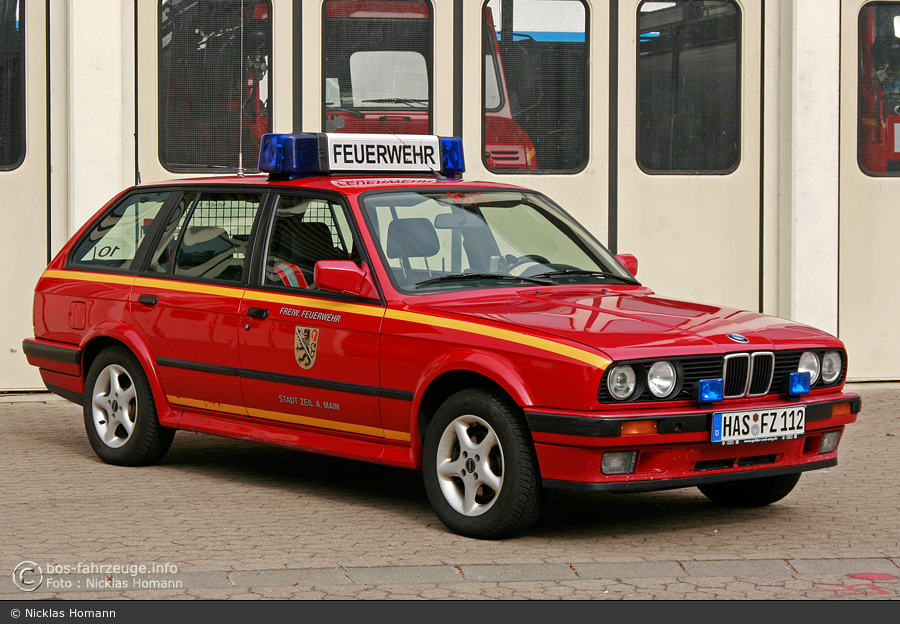 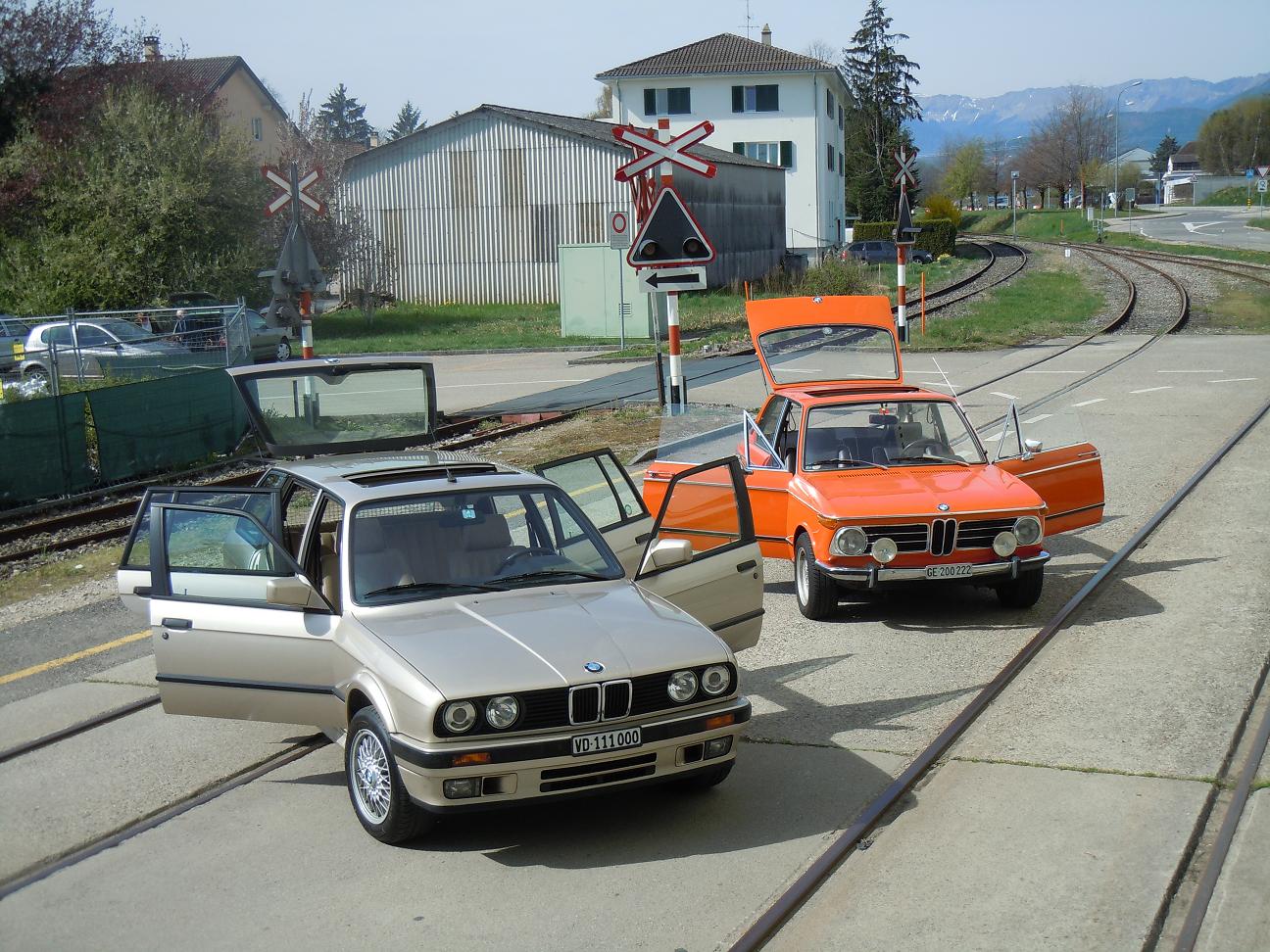 The most rare 325iX has got to be the 325iX Elektrik. Powered by Sodium Sulfide (NaS) batteries, this snail could scoot to an impressive 31 mph in only 9 seconds and top out at 62 miles per hour. Even the world famous Peel P50 couldn’t do that! 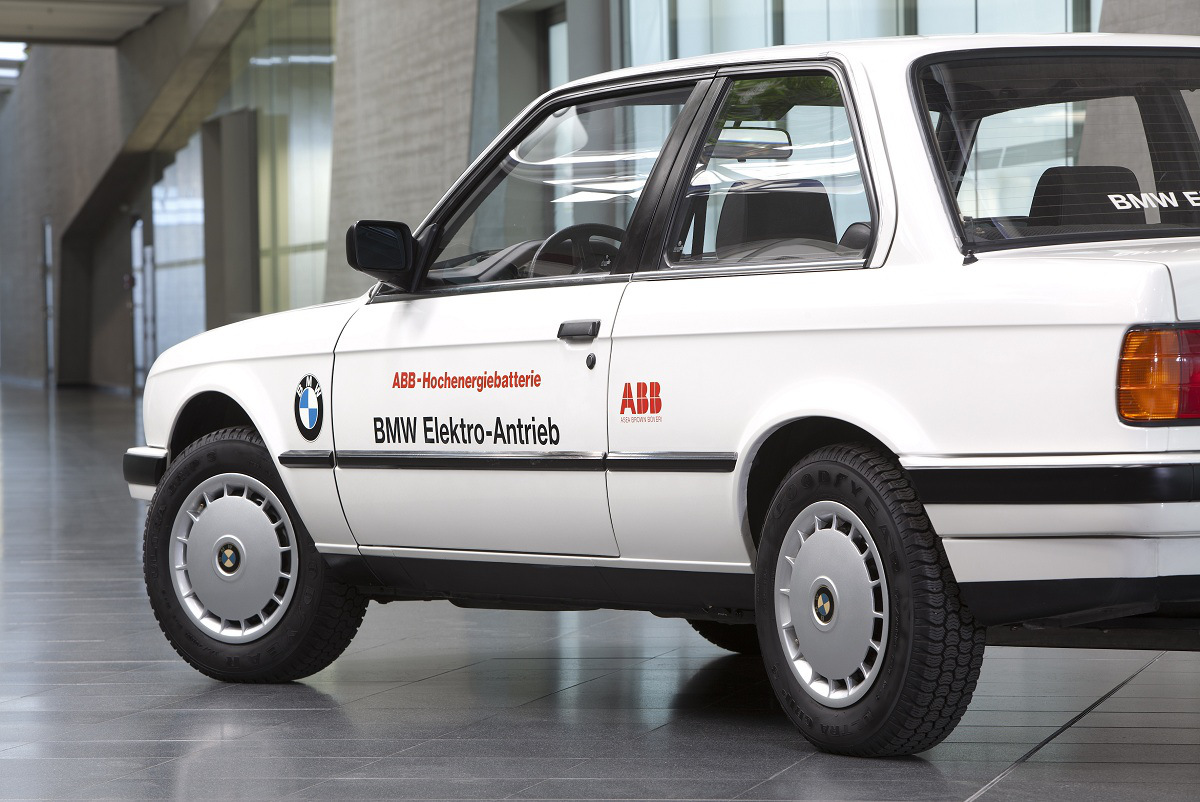 The electric iX could travel up to 93 miles on a single charge. The NaS batteries were an upgrade from the BMW 1602 electrics’ unveiled at the 1972 Olympics that utilized sealed lead acid batteries and could travel most of the distance of a marathon on a single charge (only about 19 of the 26.2 miles!). These two vehicles demonstrated the abilities of BMW and perhaps they were 25 years too early because they just weren’t practical at the time. 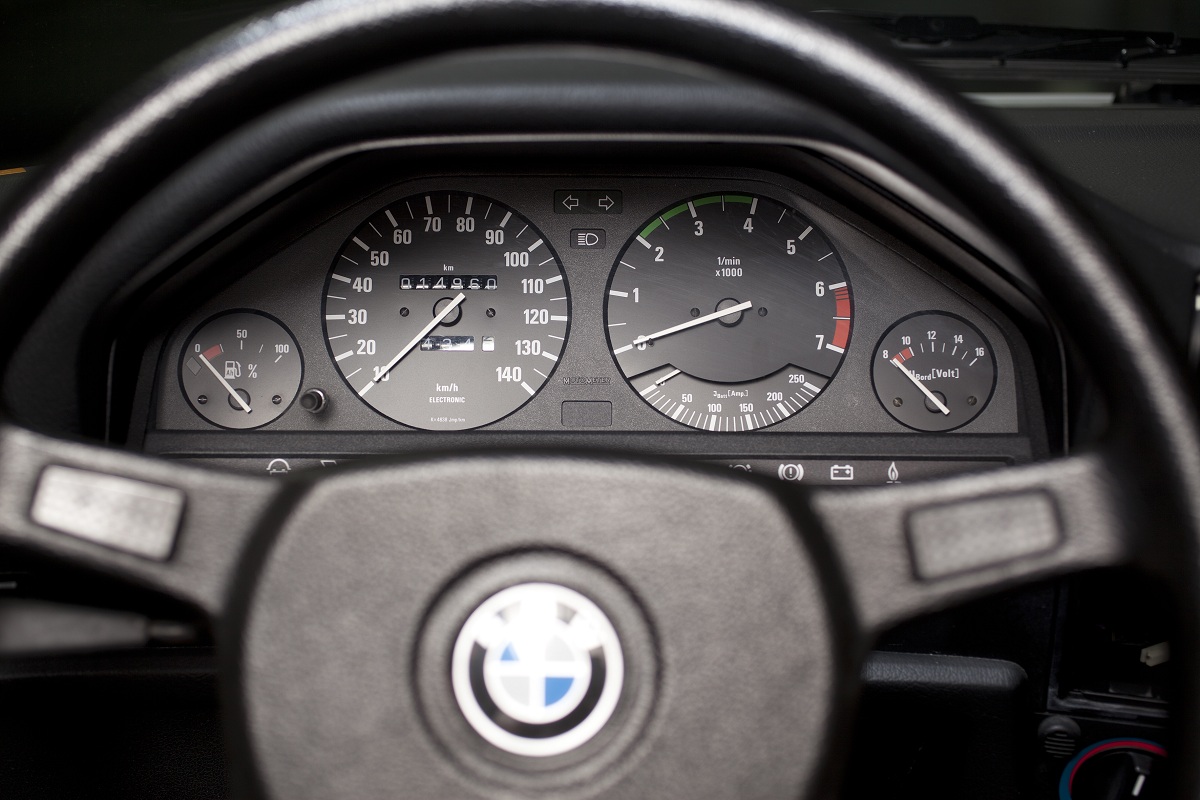 The instrument cluster was changed, as was the engine bay, but the electric power plant placed another, mostly unknown, chapter into the list of achievements of the 325iX. 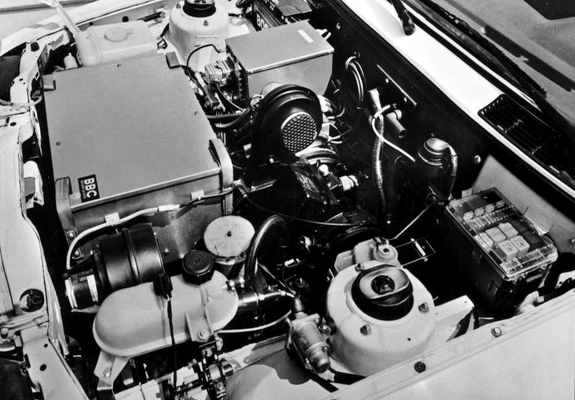 These electric models did not have the unique 325iX fender flares making it hard to distinguish from a regular e30. The upright shock towers are a dead giveaway though in the above photo. Below is the touring version. 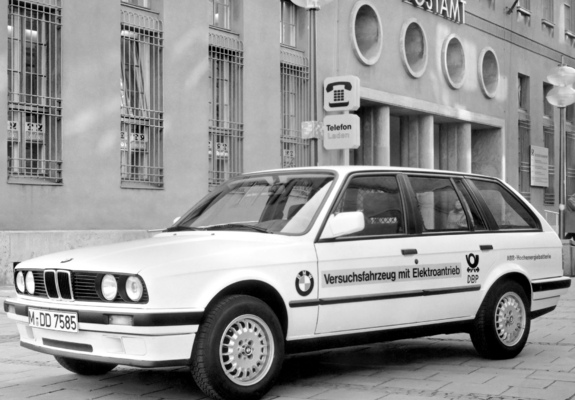 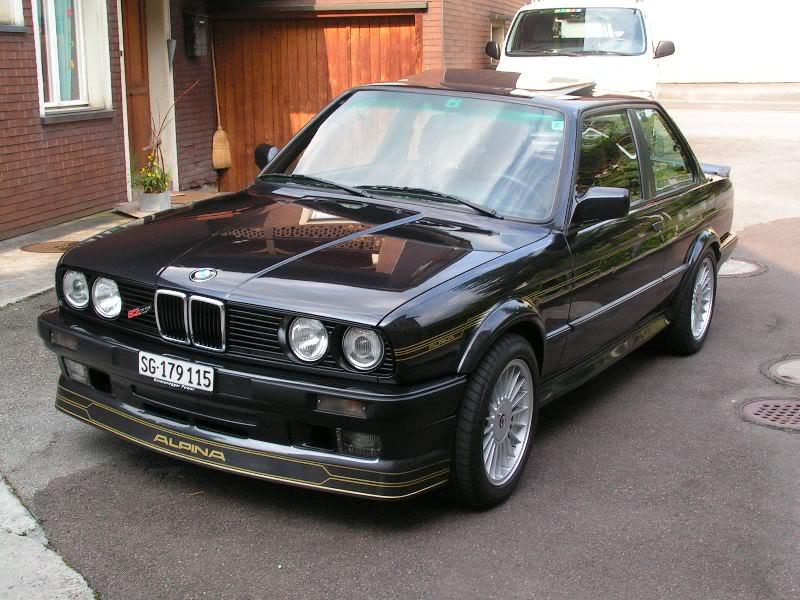 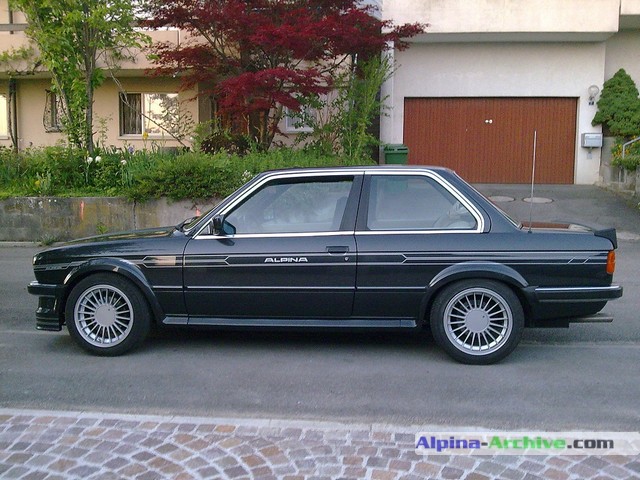 This car was a hopped up version that was produced by the aftermarket tuner Alpina. Supposedly, only 9 of B3 2.7 Allrads ever made it into production, which, though sad, is part of the allure of a rare car such as these two. If you look closely you can see the early model fog lights and stripes on the door sills of the fender flares on the C2 and the changes made to the B3. 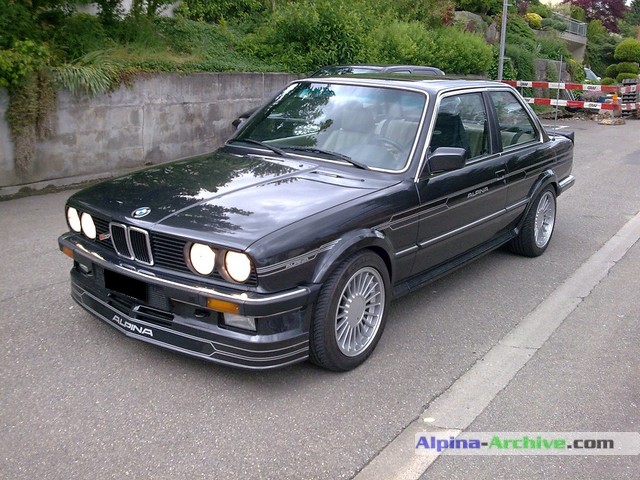 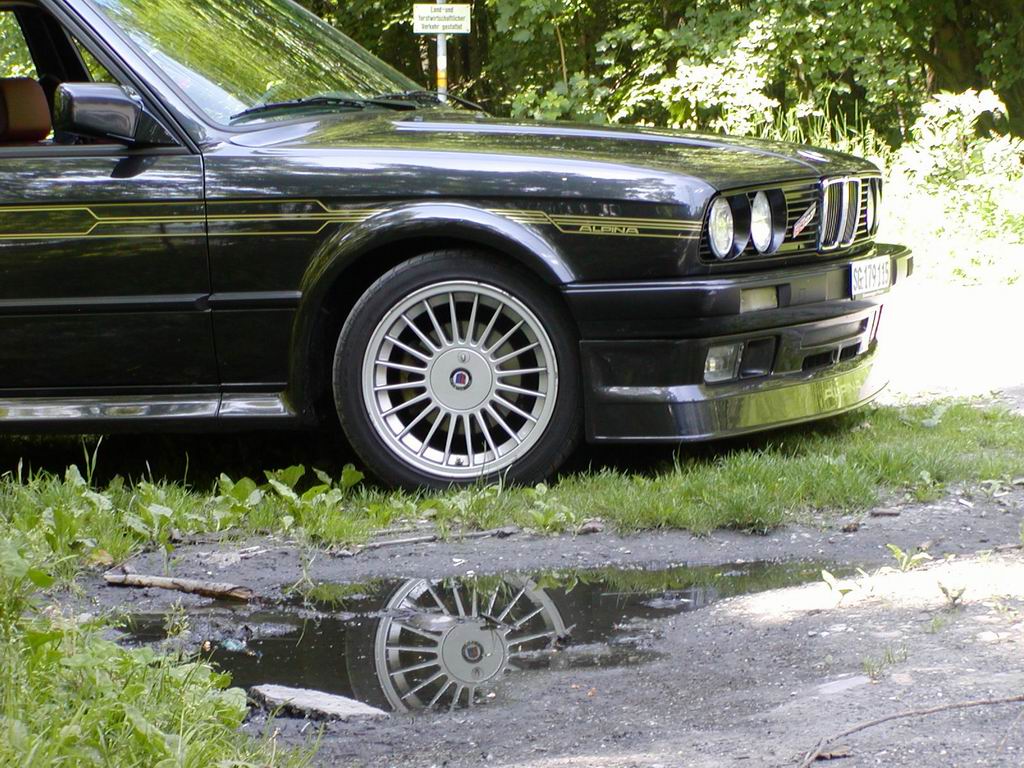 The B3 2.7 non-iX also came in the form of the touring, sedan, and convertible. The engine was stroked out to 2.7 liters with the eta crankshaft and eclipsed the 200 horsepower mark in both the C2 and the B3. Both were the upscale e30 with more power, more luxury, and more robust exterior styling. The telltale signs of these being all wheel drive are the aggressive fender flares and upright stance of the front shock towers. 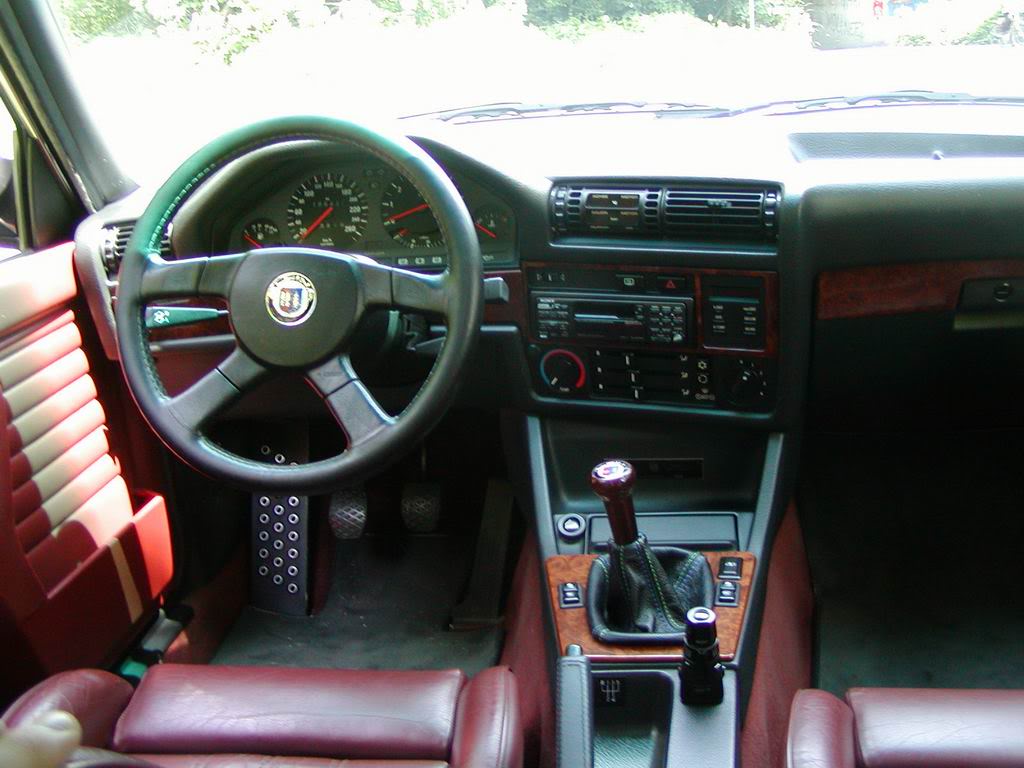 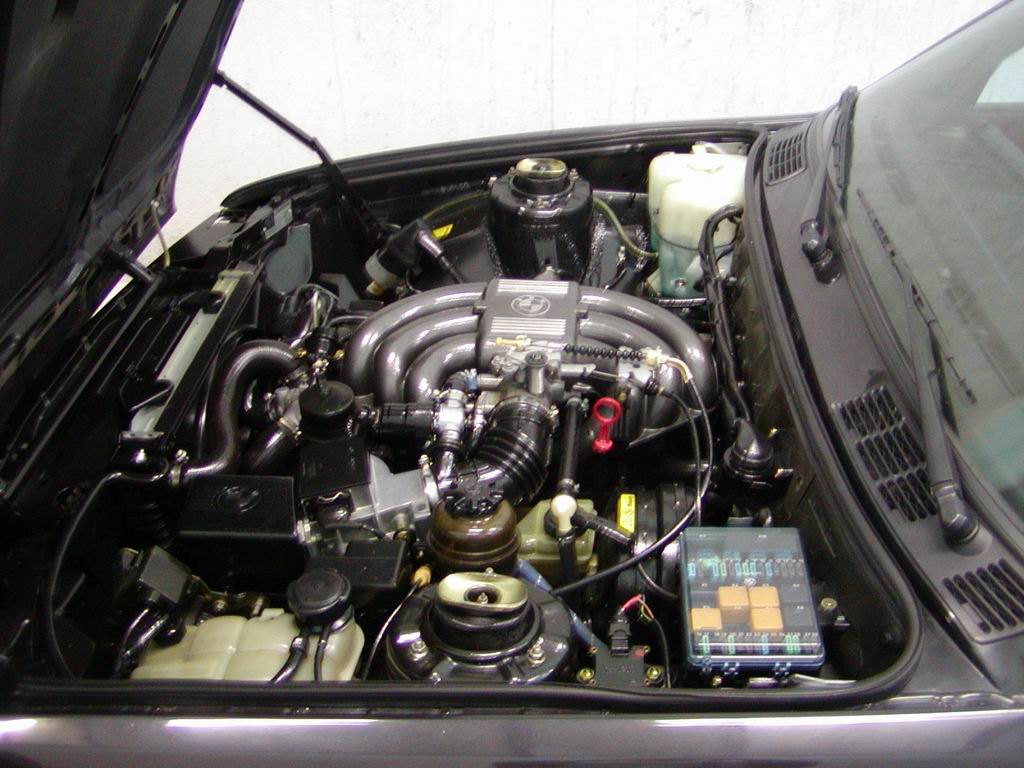 All models of the 325iX are rather uncommon. Owning one is owning a piece of BMW history. Knowing about rarer models will help the avid enthusiast keep his eyes peeled for when one of these presents itself. The 325iX is the first of only two models in the history of BMW that have been designated the iX (the e34 525iX was the other). Since the 325iX (and 525iX), BMW has not offered another vehicle with the iX suffix to denote the all wheel drive system. 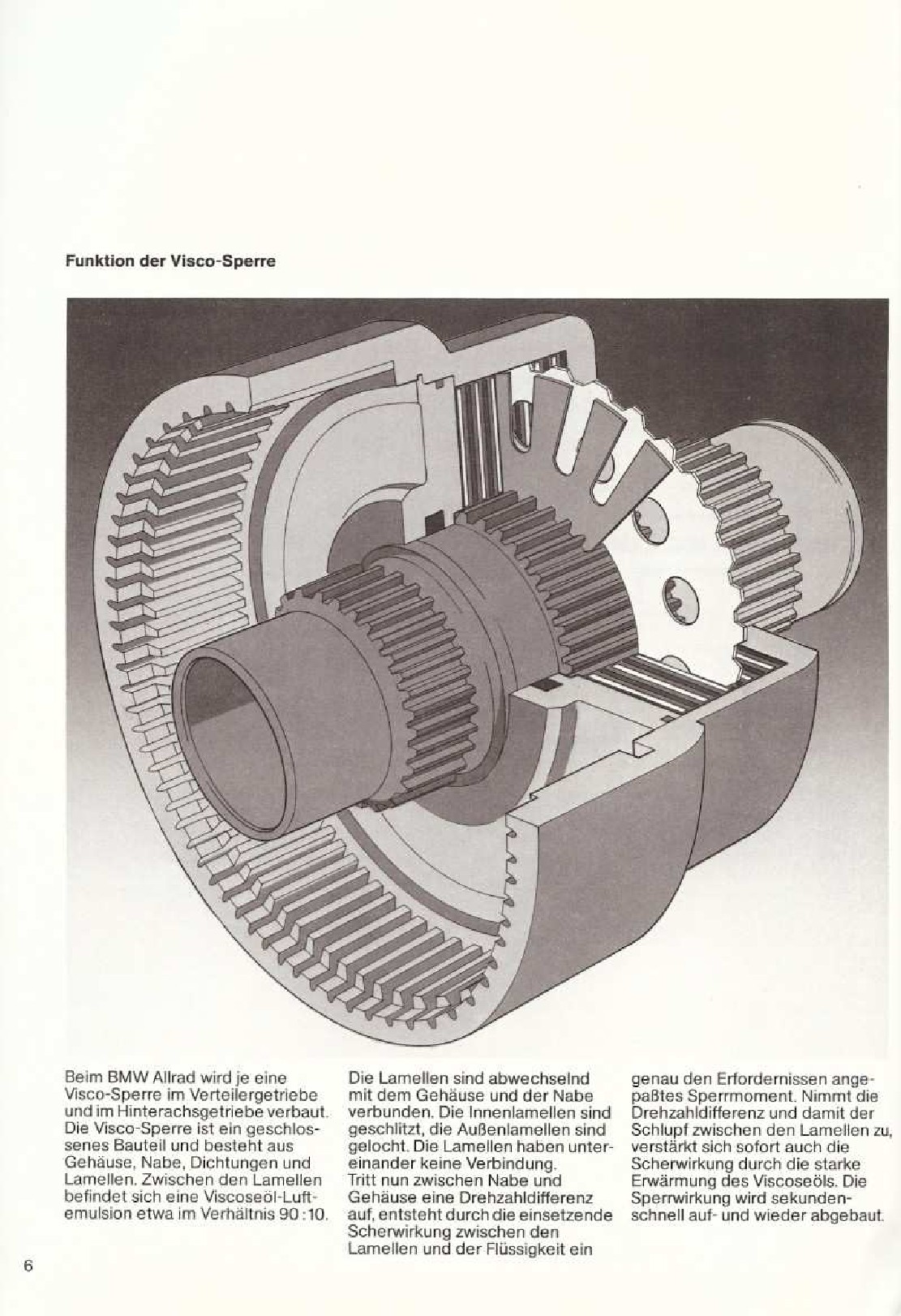 If you haven’t gotten enough iX fun, below are some iX relevant video for your viewing pleasure!