As BMW enthusiasts, the rare and historic models produced by BMW over the years hold a special place in our minds. Leaping CSL’s and fire breathing M1 Pro-cars are some of the posters we allow to hang in our garages. These unicorn cars only linger in our memories based on their importance to our own models. The McLaren F1 can trace it’s roots to the 850CSi in much the same way that the E30 M3 can thank the E26 M1 for much of its mechanical heart. We as BMW enthusiasts trace own vehicles back to the legacy of previous models. And although it is unlikely we will ever get to see the players who wrote the story, there is a next best thing; BMW’s Heiligen Hallen. The almost sacred “Hallowed Halls” may be BMW’s best kept secret. Take a look for yourself, just be sure to have a napkin so you don’t salivate on your shirt too much…

Inside a sober industrial building located somewhere near Munich (we’re not allowed to divulge more specific details), 90 years of BMW’s hidden history lies behind a nondescript door. We give you an exclusive tour of the spectacular concepts, technical experiments and legendary racing cars within…
A faint aroma of oil and rubber lingers…
Enter the large, climate-controlled warehouse and your eyes are met by row after row of significant BMWs parked side-by-side. In total, around 1,300 vehicles are divided across multiple levels, as well as 300 of the marque’smotorycles, 200 racing machines and 100 Minis – there’s even a 1960s ‘Chinese Eye’ Rolls-Royce DHC by Mulliner Park Ward for good measure. A faint aroma of oil and rubber lingers among the stunning collection of concept cars, prototypes, series variants and design studies.

From drawing board to race track 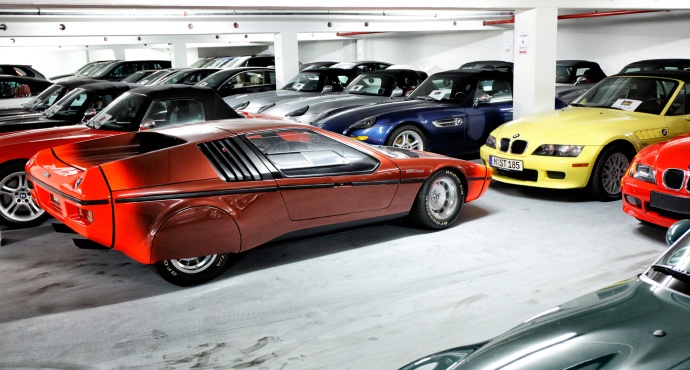 There are no carefully choreographed displays here – yet it’s the honest nature that makes the effect all the more breathtaking. Development prototypes of the Z3 and Z8 roadsters cast a glance at a milestone in their automotive DNA: the 1972 BMW Turbo. Some distance away is an example of the resulting M1 supercar, which still managed to shock the public with its wedgy lines despite being released six years after the water-testing concept from which they were inherited. Elsewhere, there are more landmark cars to be found, including a road-going McLaren F1 (which was BMW-engined, of course) and a Fina-liveried longtail GTR that competed at Le Mans in 1997.

Passing on the DNA 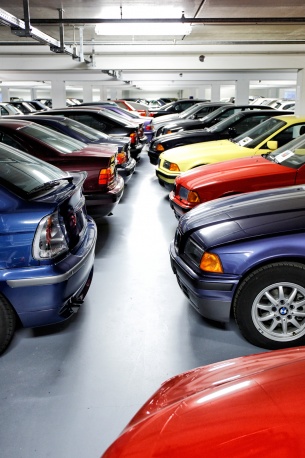 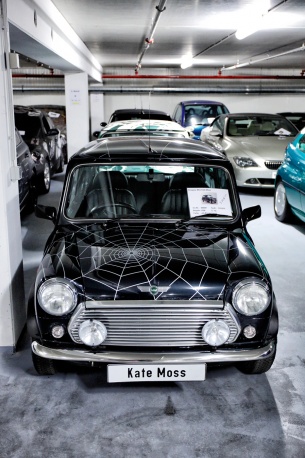 Another car to immediately grab your attention – and not only due to the striking orange livery – is the Jaegermeister BMW 320 Turbo, which managed to fend off the formidable Kremer Porsche 935 and Zakspeed Ford Capri to win the Hockenheim round of the 1979 DRM championship. Interestingly, the 1.5-litre turbocharged straight-4 it employed would go on to power several Formula 1 cars, including the Brabham BT52 in which Nelson Piquet won the 1983 F1 Drivers’ Championship. 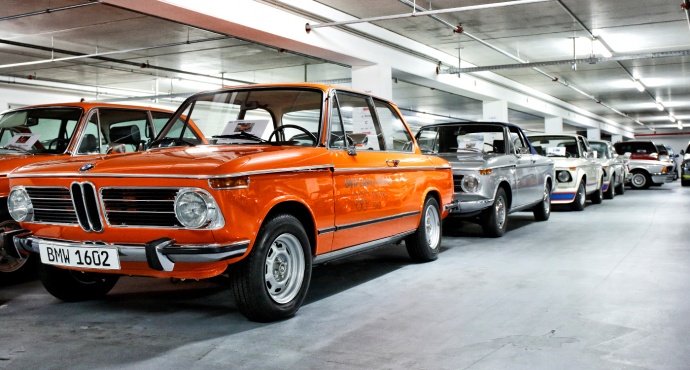 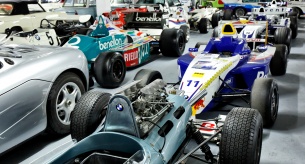 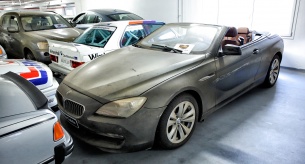 It might never have become the official car of Gotham’s resident superhero, but with its outrageous spoiler and distinctive bonnet fins, the 3.0 CSL is certainly our favourite Batmobile. Tucked away nearby is car that does have Hollywood provenance, even if nowhere near the charm. Scratched and sand-ridden from the Tom Cruise’s endeavours in 2011’s ‘Mission Impossible: Ghost Protocol’, a 640d convertible sits unwashed and unrepaired, the collection’s curators preferring to preserve its big-screen battle scars. 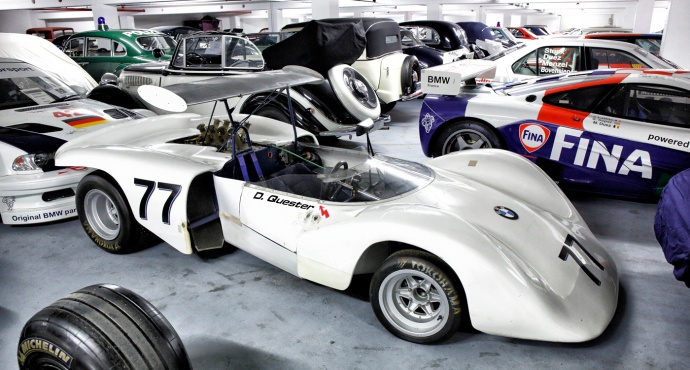 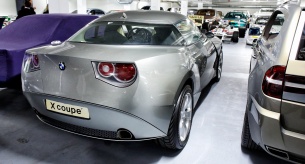 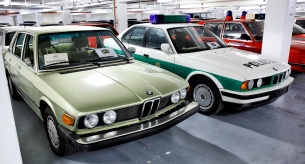 In a stark contrast to BMW modern-day behemoth, we’re whisked back to the roundel’s formative years in the automotive industry. After more than a decade of producing aircraft engines, BMW turned its collective hand to making cars – the first fruit being the Austin 7-derived Dixi DA 2 of 1929, with the great 328 roadster following some years later. In the nine decades that followed, BMW continuously pushed boundaries. Examples of this creativity represented within the collection include an X5 bestowed with a 700HP, 700nM V12 LMR engine – in which Hans-Joachim Stuck set a storming 7:47 lap record at the Nordschleife – and 1993’s E1 prototype, an ancestor of today’s i3 electro-city car. Weighing in at less than 1,000kg, it was an early pioneer of recuperative energy. 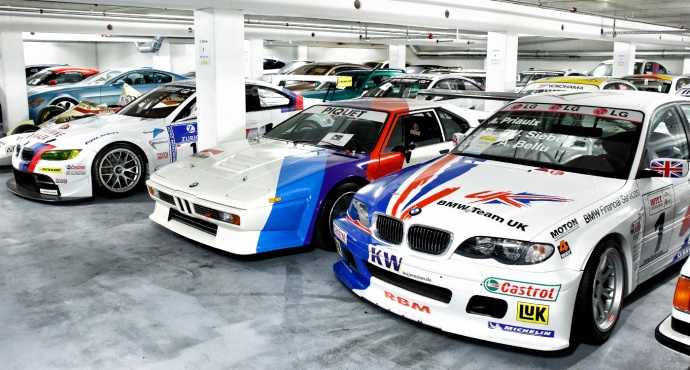 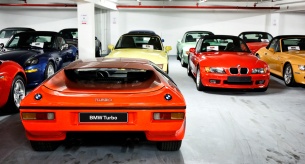 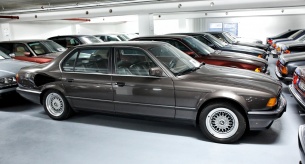 Another spectacle is the collection of famous Art Cars, waiting patiently whether it be for their next event outing, or a thorough in-house restoration. Other examples of contemporary automotive art include the ‘Great Brit’ Minis, Kate Moss’s spider-webbed car the most notable. However, rarities such as the 502 convertible of 1955 are works of art in their own right.

Unlike the museum it serves, the storage facility has abundant space – thus allowing almost every variant of the hallmark 3 Series to be kept, along with their 1600 and 2000 predecessors. Another sight to behold is row after row of the iconic 2002 Turbo, which was unfortunate enough to make its debut in the midst of the international oil crisis. Also represented are numerous examples of the two- and four-door ‘Neue Klasse’ compacts that laid the foundations for BMW’s later success.

A night at the museum 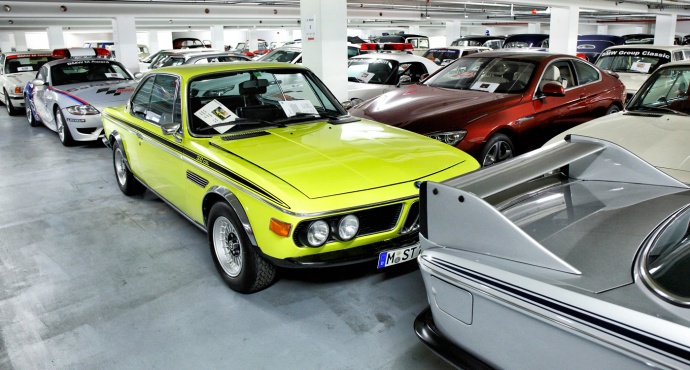 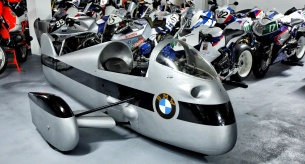 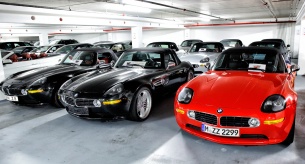 You could (and we did) spend hours wandering among the Bavarian rarities, comparing the evolution of series models side-by-side, and poring over the details of the special cars. But what happens when that nondescript door is closed for the evening, and the fluorescent lights flicker off, bringing another day to a close. Between them, the cars must have enough bedtime stories to tell each other to last another nine decades.

See the storage facility for yourself here: