As a car blog, this site sometime jumps past the basics straight into the technical details. The purpose of this article is to take a step back and go back to the basics of how the power plant of a BMW works. The content of this was taken from the F10 M5 Car Blog posted January 19th, 2013, here.

The roots of BMW go all the way back to its founder-in-spirit, Gustav Otto, a pioneer aviator in Bavaria whose father, Nikolas Otto, created the first practical four-stroke engine in 1876 that is the progenitor of all gasoline and diesel powered car engines today. Gustav refined the concept for use in airplane engines.

First lets discuss the key elements making up a four stroke gasoline engine. We will start with identifying the parts on the diagram below which we’ll also use as a starting point for explaining the Otto cycle.

As we discuss the various parts of the engine, also refer below to a dismantled real engine so you can see what the various parts look like. (This is actually the N62 engine used in the F10 550i which is the “base” engine from which the M5’s is derived).

The engine block (1 below) is a big lump of aluminium alloy with various holes and tunnels built into it. In particular, the large holes are the cylinders, where the pistons move up and down. The diagram above represents just one of the cylinders.

The piston head (3) is connected using a piston pin (between 3 and 4) to the connecting rod (4). The assembly is slid into the cylinder. The bottom “big hole” on the connecting rod comes apart and then can be bolted back together again to attach it to the crankshaft (5). The bearings (circles between 4 and 5) help it to spin with less friction.

The pistons go up and down in the cylinder as the crankshaft rotates. One of the four strokes in the Otto engine is the power stroke that pushes the piston forcefully down and spins the crank. If this were a single piston engine, the angular momentum of the spinning crank then forces the piston back up, down, and up again for the remaining three strokes until the power stroke comes again.

Crankshafts often have weights on them to counter-balance the vibrations that would otherwise be caused by having the various cylinders accelerating up and down. A future blog entry will discuss the particular problems that arise in this regard in a V8 engine.

At the top of the cylinder is the bolted-on cylinder head (2). This is an air-tight housing which bolts onto the block and provides a place for  the valves (6) and the camshafts (7) above them, the spark plugs and their ignition coils (8), and the fuel injectors (9 – not shown on the diagram above).

On the engine below, there are two intake valves and two exhaust valves per cylinder (6). The diagram above shows only one of each for simplicity. More valves allow more air to flow in and out faster and so are better (up to a point).

When we look at the spark plugs (8), the actual spark plug is the lighter coloured part on the end. It screws into an ignition coil (the black part). The ignition coil is an electrical transformer that can take 12V battery voltage and transform it into the very high voltages necessary to create a spark (around the 20,000 V range). In the olden days, there was only one ignition coil that fed a “distributor” that the crankshaft would make spin around, directing the high voltage via switches and thick wires to each of the spark plugs in turn. Nowadays each spark plug gets its own coil, which is a more reliable system in which the spark timing can be more accurately controlled by a computer.

The valves are opened and closed by means of egg-shaped “cams” attached solidly to a rotating camshaft (7). On the diagram above, the camshafts are at the top right and left, encircled by the smaller red arrows. One is the exhaust camshaft, and the other the intake camshaft. As the crankshaft rotates, mechanical linkages cause the camshafts to rotate as well (at half the speed), which causes the cams to rotate, which in turn causes the valves to open and close at the correct times. 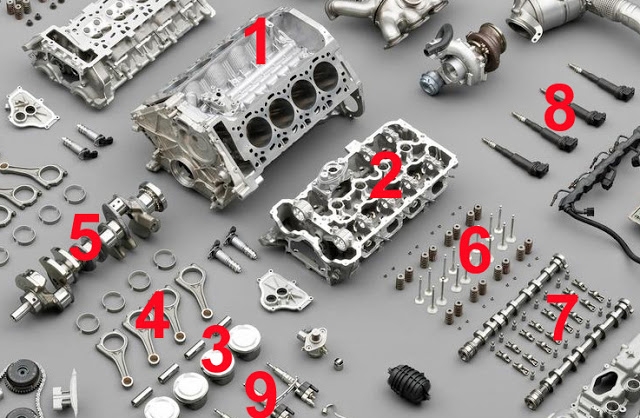 For the engine to get going, it needs a push from something external. In the old days someone ran out and manually cranked the engine. Nowadays an electric starter model powered by the battery does that for you at the turn of a key (or a press of a button in the case of the F10 M5). Once it starts going, the momentum of all the moving parts keep it going. In particular, the flywheel is a heavy disk attached to the crankshaft that once it starts moving it’s hard to stop. It is the big black disk shown below. The flywheel also acts to smooth out the pulsating nature of the four-stroke engine.

The next diagram shows the first of Otto’s four strokes: the intake stroke.

On the intake stroke the intake valve (blue) is opened by the rotating cam while the piston moves away from the valve drawing a mixture of air and atomized fuel in. We will discuss how the fuel gets mixed in in a future blog post, because it is very interesting in and of itself.

The next stroke, shown below, is the compression stroke.

On the compression stroke the air-fuel mixture is compressed (in a 10:1 ratio in the case of F10 M5). During this stroke, the valves are both closed up. As the air compresses it gets hotter, but not so hot that it detonates the fuel. That is what the spark is for.
When the cylinder is at or near the top of the stroke, the fuel-air mixture is ignited via a spark from the spark plug.  The exact timing for this used to be controlled mechanically via a spinning distributor,  but nowadays is completely under computer control. The extra energy from the spark starts a combining reaction that releases a lot more energy than what was put in. This extra energy was stored in the chemical bonds of the gasoline. It’s like pushing a cart just the last few feet over the crest of a hill and watching it race away. Or lighting something on fire with a match. A little energy in releases a lot of energy out. All this excess energy causes the gasses to heat up. This heating up quickly and dramatically increases the pressure in the cylinder (as in a pressure cooker, but all at once). This is what we call an “explosion” (heh heh!), and is what starts the power stroke.
At the start of the power stroke all that extra pressure pushes equally on all sides of the cylinder, but since only the piston has anywhere to go, it gets driven down most forcefully. Once this has happened, the starter motor is no longer required as the inertia stored into all the now rotating components will keep things moving.Once the piston has been driven down and around, we need to get rid of the exhaust gasses by means of the exhaust stroke.
During the exhaust stroke, the exhaust camshaft rotates in such a way that the cam pushes down on the exhaust valve, opening it. At the same time, the piston continues its momentum up, driving the exhaust gasses out through the exhaust valve. This returns us to the start again, where the four stroke cycle is repeated over and over again.

What is amazing to me isn’t that an engine breaks down from time to time. What is amazing is that this contraption works at all! At the M5’s redline of 7200 revolutions per minute (RPM), eight explosions happen every two revolutions (because there are eight cylinders all doing this at slightly offset times one from the other, all driving the same crankshaft). This results in 7200*8/2 explosions each minute, or 480 explosions every second. And this is supposed to keep working for more than 10 years? Hats off to the automotive engineers for that trick!

Note in the above engine the chains that connect the spinning crankshaft to the four camshafts. This is called the timing chain and is the mechanical mechanism by means of which the camshafts are made to rotate (at half the speed) as the crankshaft rotates.

This engine (and the M5’s) is a DOHC (Dual Overhead Camshaft) engine. DOHC has separate camshafts for intake and exhaust valves sitting above the valves. Note that a V8 actually has four separate camshafts, but the system is still called DOHC, as it is DOHC on each cylinder bank. An SOHC (Single Overhead Canmshaft) engine has only one overhead camshaft used for both intake and exhaust valves, and uses relatively long levers to move the valves. In the olden days the camshaft was at the base of the engine, and long “pushrods” were used to move the valves as shown below. This was a noisy and unreliable system. DOHC is the way to go because of its mechanical simplicity, and because the timing on the intake and exhaust cams can be varied separately, something we will cover off in a future post.

The important “vital statistics” for a four-stroke gasoline engine are as follows.