Here at Drive 4 Corners, we are interested in sharing all unique BMW content, including motorbikes (BMW Motorrad). Of course, most enthusiasts should already know that BMW was the platform used in the late 20’s and early 30’s to break land speed records at the helm of Ernst Henne. He worked with BMW and broke over 75 records over the course of 8 years, being known as one of the most successful german motorcycle racers. 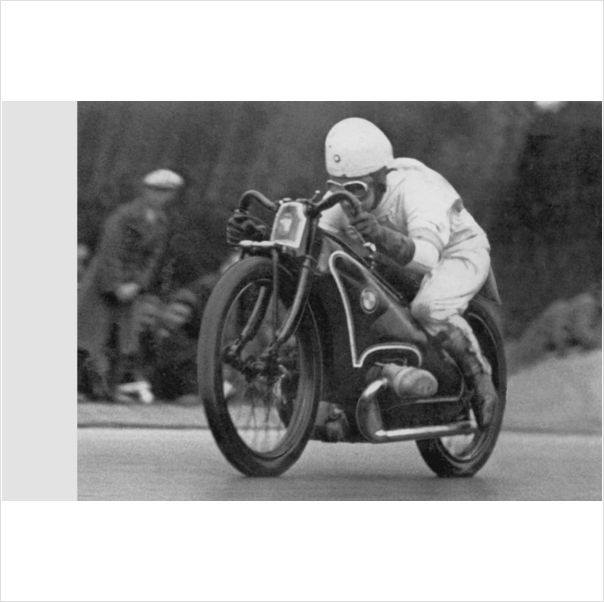 His efforts to pioneer useful aerodynamics allowed him to achieve his goal of the motorcycle land speed record (173mph in 1937) with the use of a 500cc supercharged BMW. The engine made 108hp, more power than almost any car available in the time period. His efforts to improve clothing, helmet shape and streamlined aerodynamic fairings allowed his records to stand for almost 15 year later. The most famous motorcycle ridden by Henne was The White Ghost, otherwise known as Henne and his Egg. 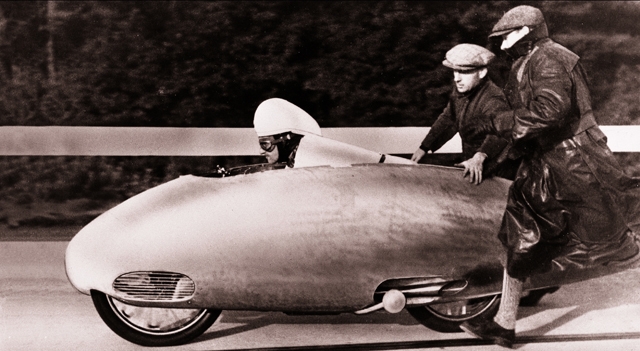 Henne’s story is directly related to a modern example known as The Sprintbeemer. This example is a rare unit, being custom modified by a group called the Lucky Cat Garage. It is designed for pure acceleration and looks, attempting to maintain a practicality all while looking absolutely menacing. The article originally found here goes into detail regarding the multitude of parts used to build this custom machine, along with the original concept for the build.

Many ambitious custom projects start with a good-looking engine as the focal point to build a machine around, or even a hand-crafted frame. But this project was different. It started with the rear tyre. This special MH Racemaster dedicated drag slick tyre is designed and constructed to help a motorcycle go fast – but only in a straight line. 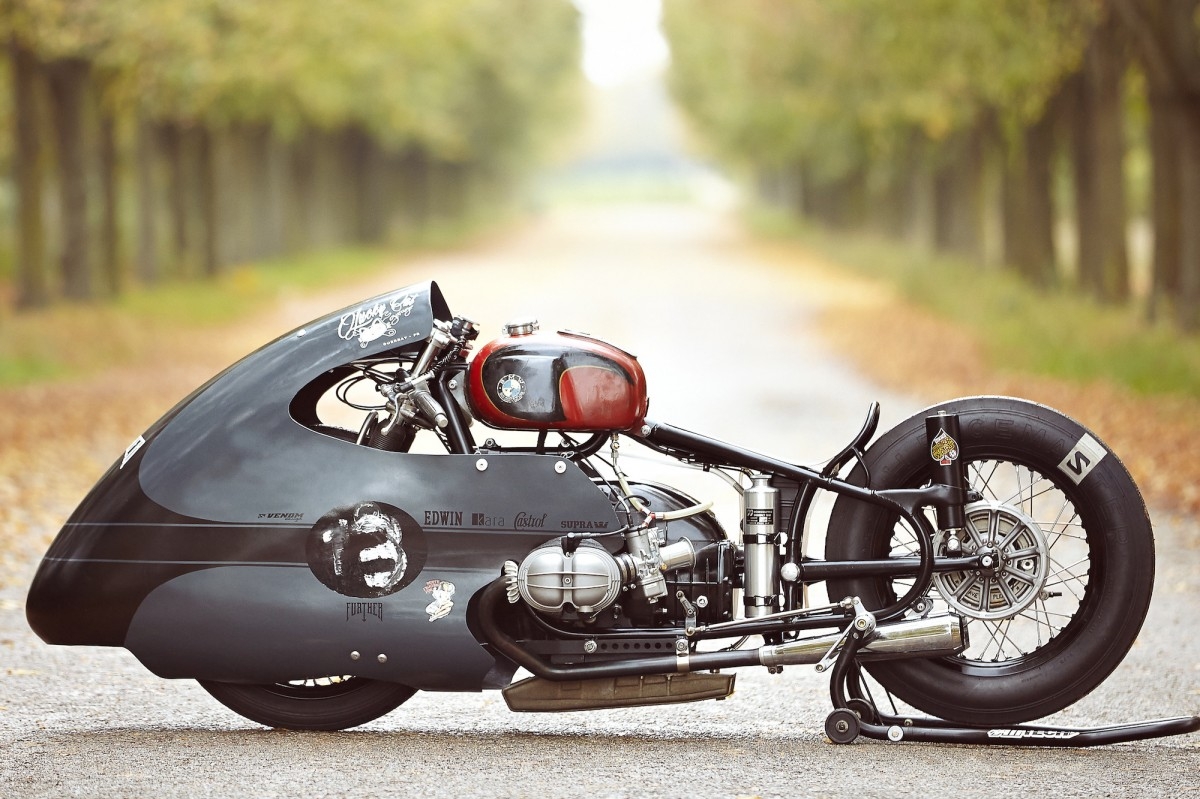 I fell in love with this MH Racemaster and was then looking for a bike to mount it on. I had never seen a real sprint bike based on a BMW, so I decided to find out why nobody had made one before – and I still don’t have the answer as this Sprintbeemer turned out to be pretty fast! This latest project was born out of an interest in the sprint racing culture and a desire to know if a BMW bike was capable of taking on the more established British marques that are synonymous with the sprint racing world. 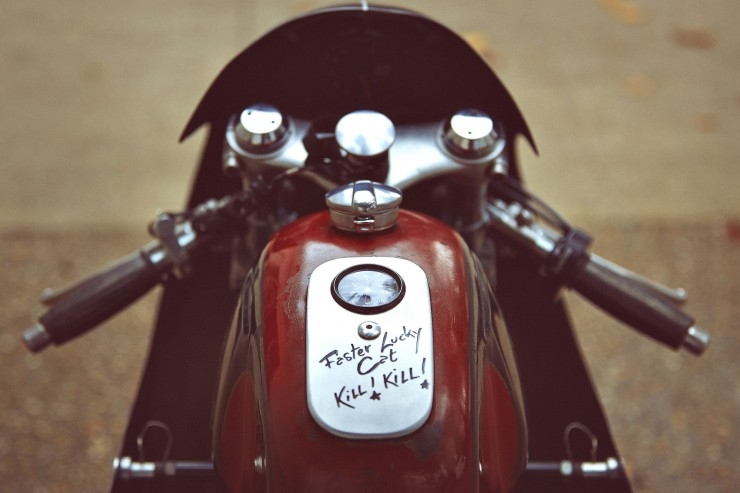 I just could not find anything suitable, which then gave me the challenge of building the exact BMW bike we needed from scratch, using a variety of parts and components I already had or could source, and designing and building the ones that I couldn’t find from elsewhere. This would allow me to create the machine of my dreams, and one that would be perfect for sprint racing – with a long wheelbase, low centre of gravity, and no unnecessary parts that add too much weight.

On paper at least, the aims were simple: a fast-accelerating, great looking custom boxer, reduced to the maximum, with great traction and aerodynamic efficiency, all wrapped up in a stylish package that would turn heads – both at a standstill or flying down the narrow strip of asphalt where only a fraction of a second separates the winners from the losers. 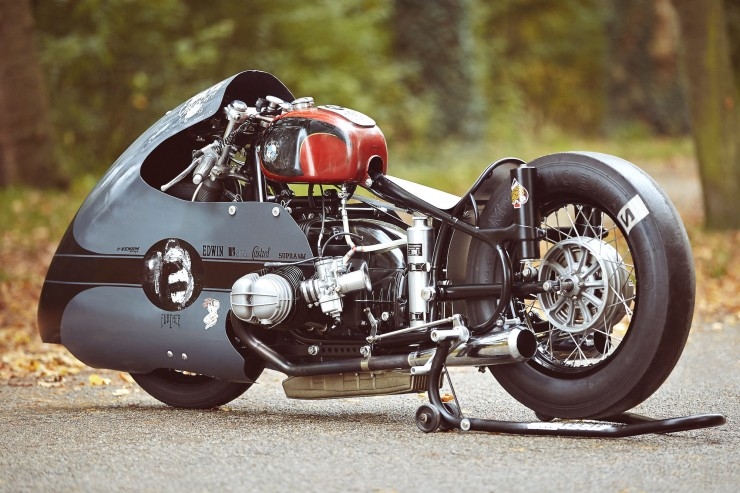 The project had a fixed deadline, as the Glemseck 101 event only takes place once a year and this was the best possible chance to show the finished motorcycle to those who would appreciate it most. Furthermore, I didn’t just want to unveil a show bike; I wanted to actually compete in the sprint on it. 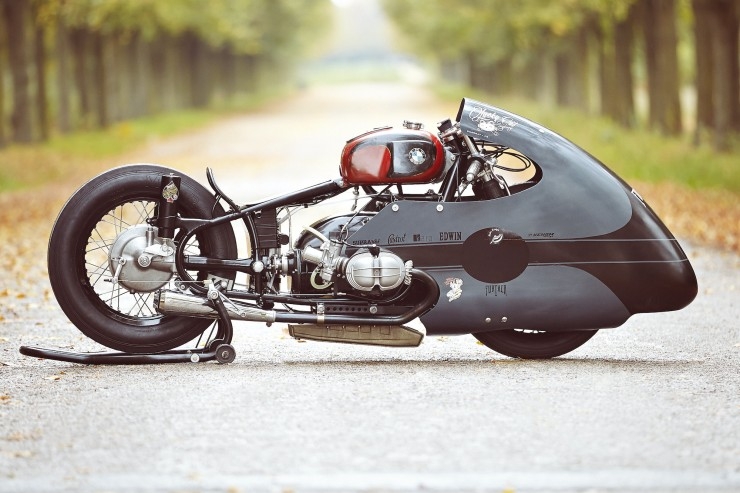 Interestingly, the fuel tank is from an Italian or french moped, which was found by a friend who noticed that it already had BMW logos stuck on to it, no doubt revealing a previous owner’s dream to one day actually own a BMW bike rather than a moped! Imagine if this one-time owner reads this story and sees his old fuel tank on a crazy BMW special… I like the possibility of this and so I left the fuel tank exactly as it is as a mark of respect to the original owner.

Many of the above parts are second-hand ones found at ‘swap’ meets or via eBay. The ones that I couldn’t find are unique, having been especially machined or welded for this project with the simple aims of not just looking fast but actually being fast! The focal point of this motorcycle is obviously the slim and sharp ‘dustbin’ fairing that was made by Airtech Streamlining in California. 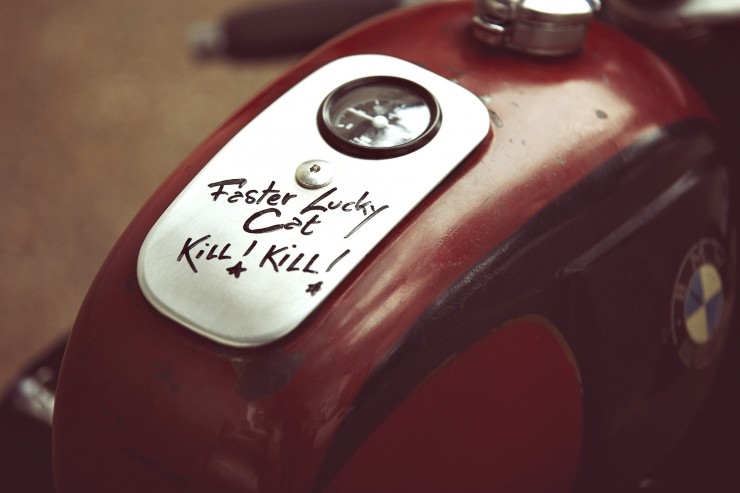 I am a big fan of special fairings and of the streamline design era who also built and often rides a one-off custom R 75/5 called the Dustbeemer. Clearly the speed quest stories of BMW Motorrad and Ernst Henne inspired me a lot. Nevertheless this was also mixed with my deep interest in vintage dragster and hot rod culture. The Dustbeemer is my on-road touring bike and features a Gran Turismo dustbin fairing and also saddlebags. The Sprintbeemer is a logical project after that and I guess it expresses my speed quest obsession!

As for power figures, I’m not entirely sure as the Sprintbeemer has not been on the test bench yet but I estimate around 80 hp. After all, the engine is a reconditioned R 100 RS unit from 1978 to which I had added a sport camshaft to increase torque, a racing electronic ignition, a pair of Dell Orto 40 carbs and a lightened clutch system. I also removed the electric starter and alternator, as well as strengthening the transmission and rear end, which I believe could have been a weak point of this machine for sprint racing duties. 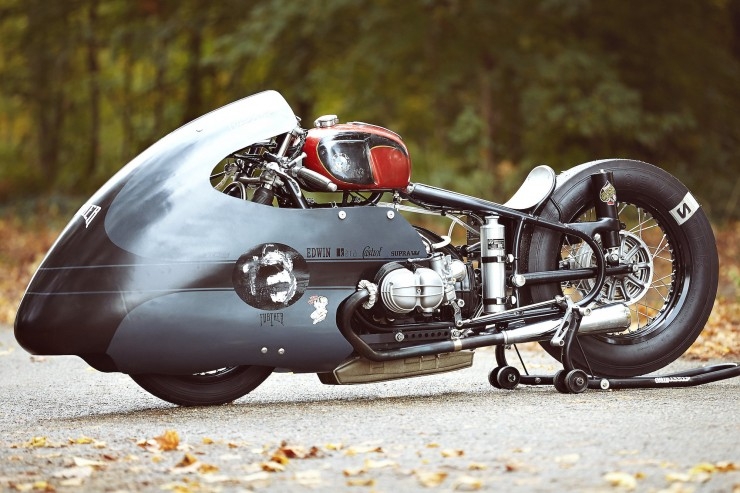 As work progressed, and the Glemseck event approached, the project neared completion. I had a chance of a few small runs on the unfinished bike and felt confident. Feeling like the luckiest guy alive, I named the bike ‘Lucky Cat’ and used a Maneki Neko (a Japanese symbol of luck) as a mascot, as it had been a gift from his brother-in-law.

So far, so good… until just a few days before the event itself, when my dreams of competing at Glemseck came quite literally crashing down to earth as I fell heavily while fooling around on a BMX bike. …I was looking for some inspiration performing tricks on a BMX but I crashed heavily, broke my left leg and nearly destroyed my ankle just one week before the race in Glemseck 101. But my friends pushed hard to help finish the Sprintbeemer in time. When I was at the hospital for some surgery after the crash my brother-in-law Frank Chatokhine worked through the night with a guy called Yves Kerlo to finish the fairing brackets. Frank is an awesome mechanic and runs a very well known vintage classic bikes workshop in France.

Wheelchair-bound, but with a strong desire to see the project to its completion, I watched as my group of friends was able to put the finishing touches to the bike – and then my friend Sylvain gladly stepped in to race it. Sylvain is a French designer who is actually working for BMW Motorrad. But most important, he’s a good friend who supported me finishing the bike and a quick rider who is able to perform really good starts – which is critical for success in sprint racing! 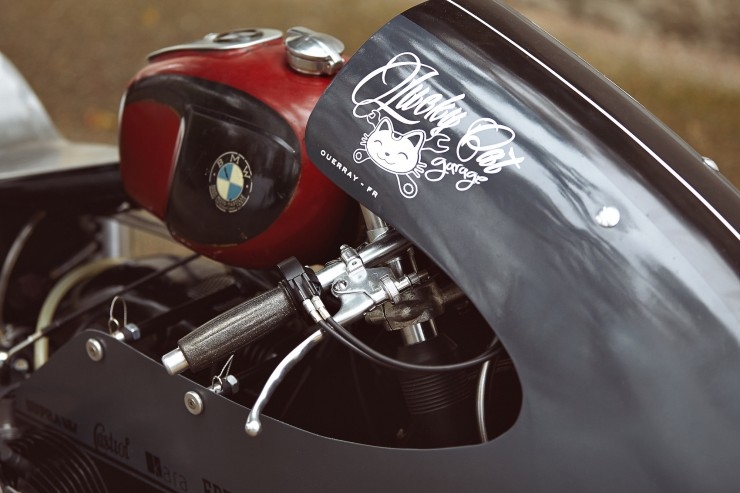 In the end, the bike was completed just one day before Glemseck 101, and despite my incapacity, there was no way that I would miss out on the journey to Germany to experience the unique atmosphere of this amazing event. So I was hauled into the passenger seat of a van with the Sprintbeemer safely strapped down in the back.

For sure not riding my bike was not the plan but I was still happy to be there and watch the bike running on the drag strip. We also won the ‘Best of Show’ award on the Saturday, which was decided by a jury of professional bike builders and personalities of the scene such as Ace Cafe, Walzwerk and JVB Moto. On the Sunday we won the STARRWARS sprint against lots of powerful rigid-framed Harleys, which was also an incredible achievement. But what was most important for us though was the incredibly warm welcome we received. I think we are the first French guys to race at the Glemseck 101 but I’m sure there will be a lot more of us ‘motorfreakers’ there next year !

Regarding the bike itself, here are some tech specs of this “beemer cocktail” using parts from the fifties up to the nineties (not to mention the S1000RR battery): 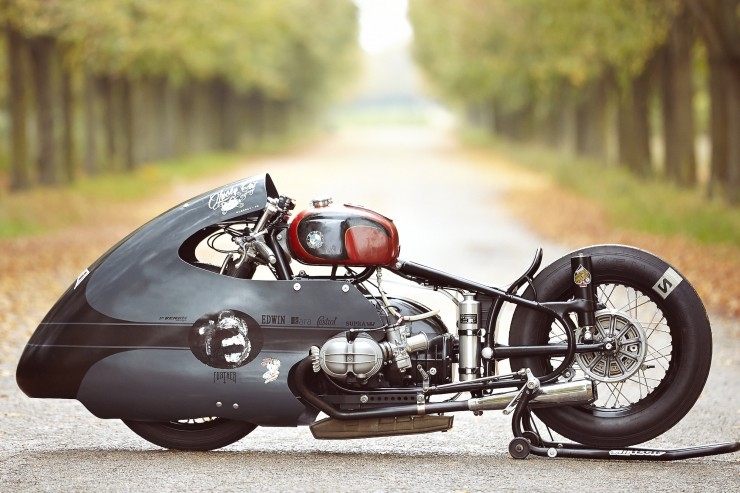 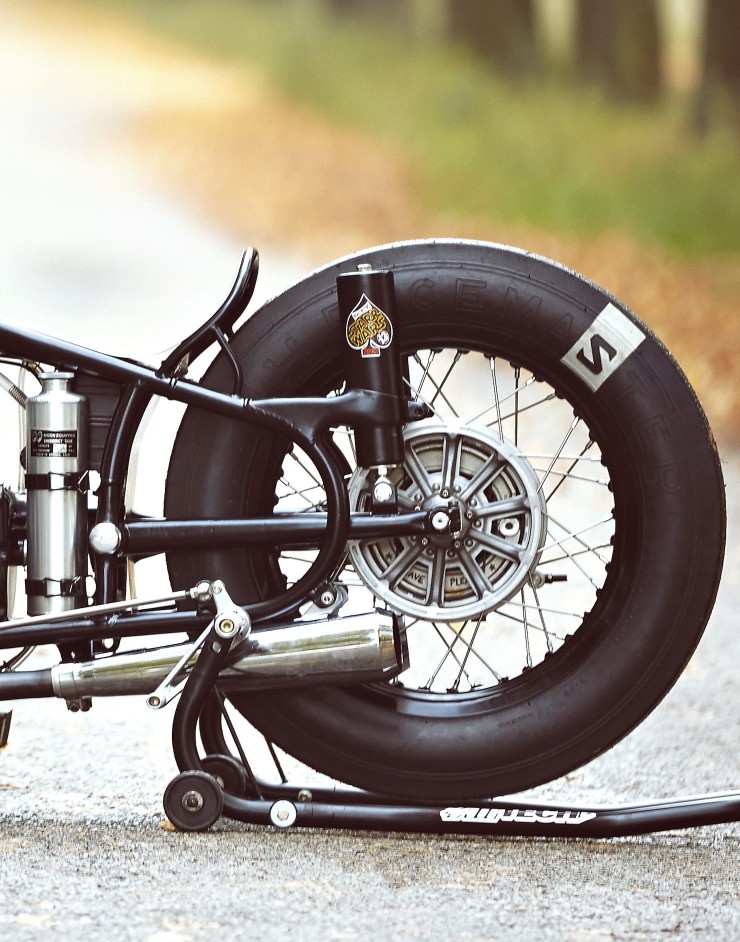 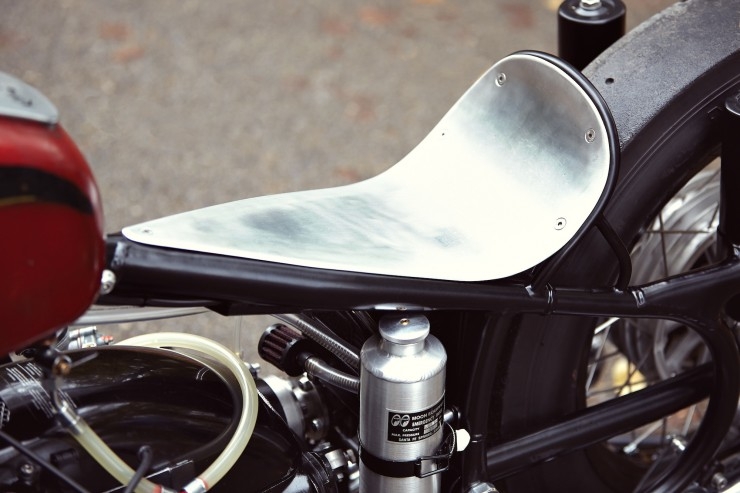 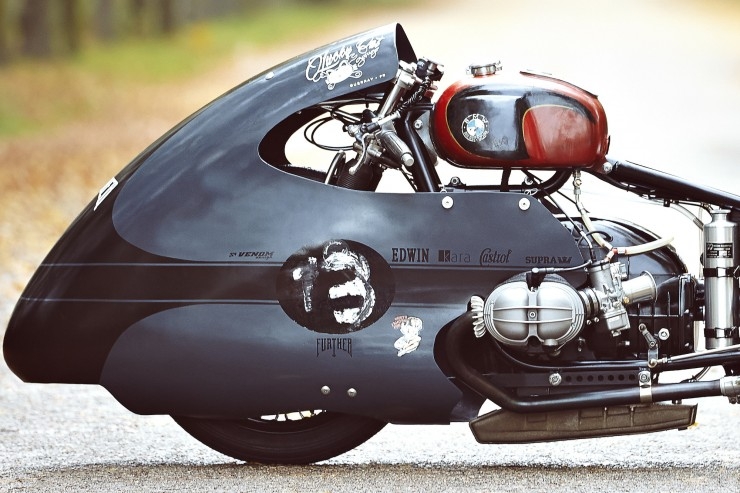 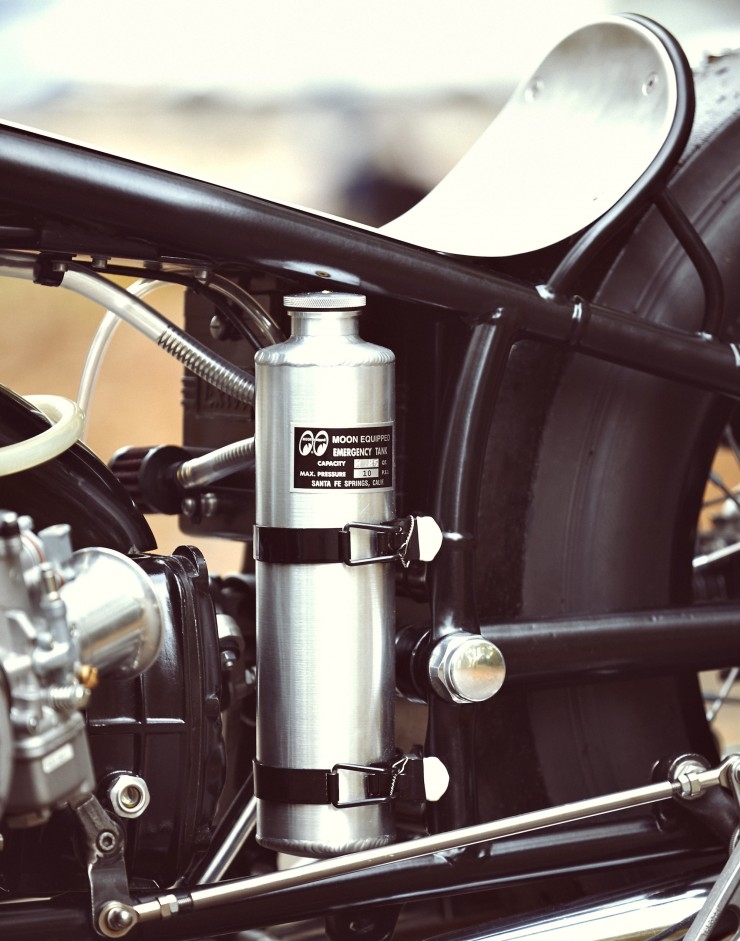 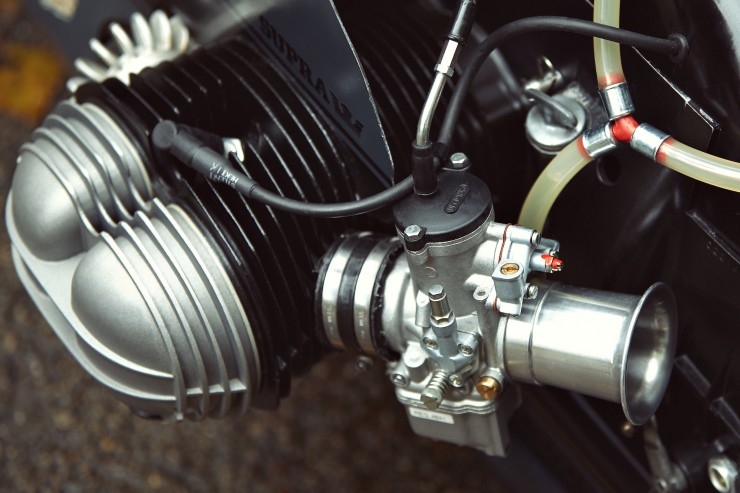 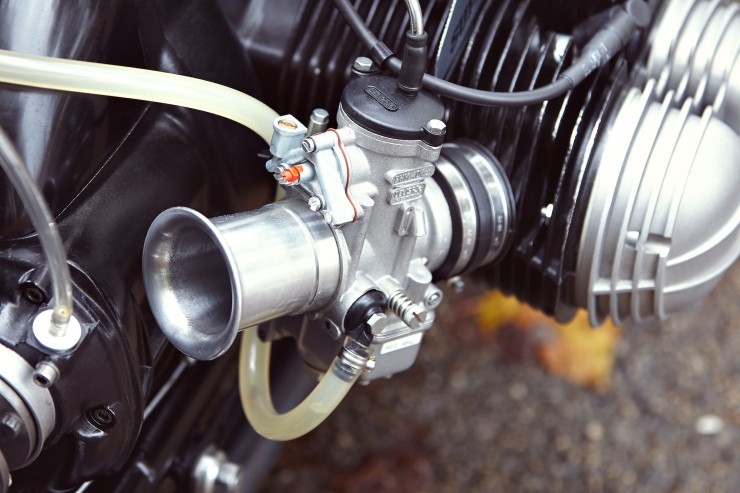 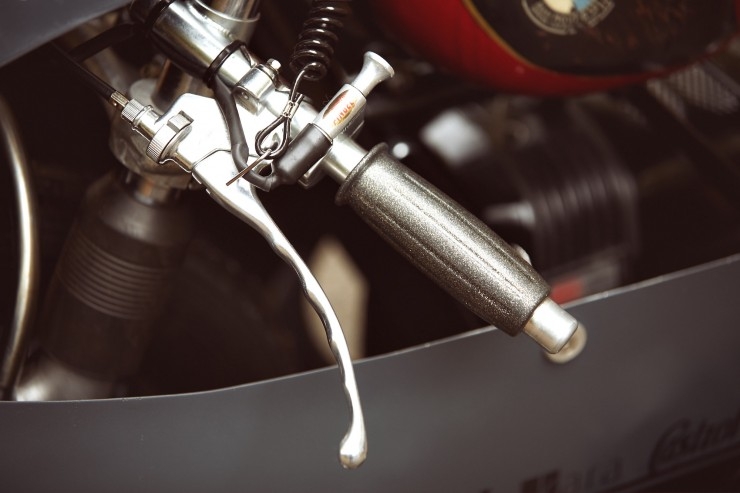 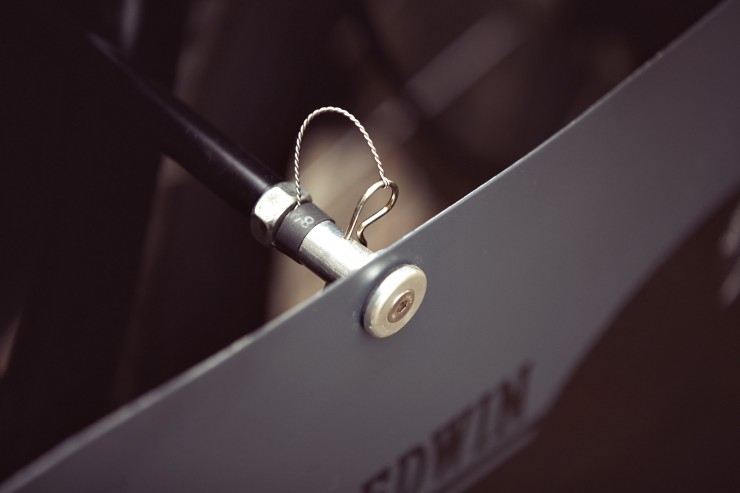 Additional information provided by our friends over at The Bike Shed.