The great history of BMW is rather unknown to many of us, and although there are way too many chapters to delve into all at once, it is possible to look at the individual verses of the story instead. One such tale involves BMW in the late 1950’s, right after the release of the BMW 3200CS ‘Bertone.’ Unlike the launch of the Bertone coupe, this period in the history of BMW marked the first time that BMW decided to market towards the economy class of automobiles. This vehicle stands as one of the most important in the history of the marque, in part because it played a major role in saving the company from disaster. It has a unique aerodynamic shape, it uses a motorcycle engine mounted in the rear of the car, and was designed to be an economical drivers car in the wake of the expensive 503 and 507. Interestingly, not many people know about this unique BMW, even among many of the most passionate BMW enthusiasts. If I were a betting man, I’d bet that you probably haven’t heard of it either…

For a brief overview, some basic detail was covered by CarThrottle.com as seen here originally.

When people mention rear-engined BMWs, it’s probably the old Isetta bubble car you’ll have in mind, right? Or maybe the new i3, which can be specced with a rear-mounted range-extending engine. Unless you really know your Beemer history, you probably won’t be thinking of this: the rear-engine, rear-wheel drive 700. 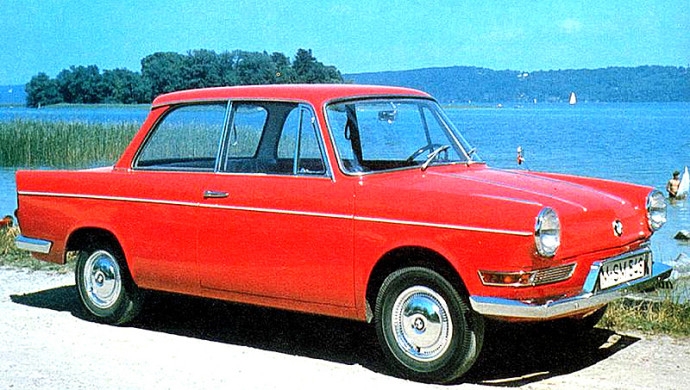 It seems to be a largely forgotten car in BMW’s history, but actually represents a crucial time for the Bavarian manufacturer. Its extravagant luxury cars like the 503 and 507 weren’t selling enough to make a decent amount of money and while its Isetta bubble car was a sales success, the profit margins were slim. At the end of the 1950s, BMW was in trouble: it was in debt and haemorrhaging money. There was even talk of a merger with Daimler-Benz. Fortunately, there was a savior, in the form of the 700. 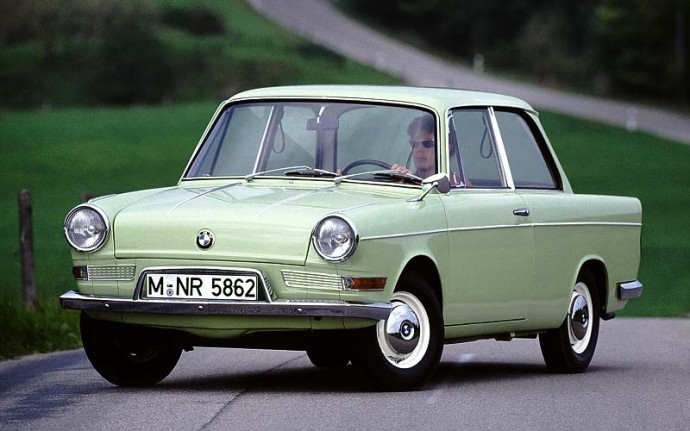 This modest, two-door car was aimed squarely at the budget end of the market. The engine mounted in the back was a tiny 697cc boxer twin taken from a BMW motorcycle and it produced just 50bhp. It was the first BMW to use a monocoque construction and later spawned a coupe and a convertible version. There was even a handful of competition versions, one of which Jackie Ickx campaigned in German saloon racing (shown below at Zolder). 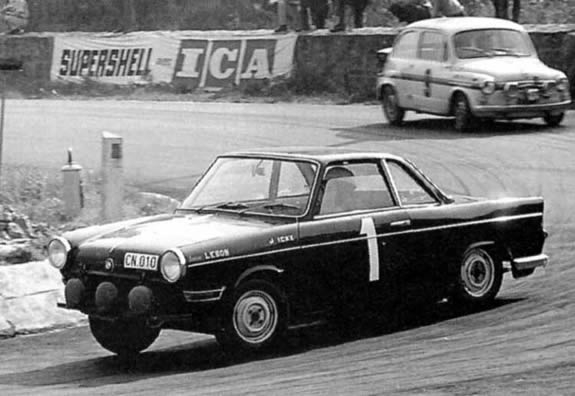 The simple, low-cost approach paid off: the 700 sold in big numbers and saved BMW from financial ruin. By the time production ended in 1965, 188,211 700s had been built, paving the way for the BMW ‘New Class’ (below), the car that firmly established BMW as a global force in the car industry. 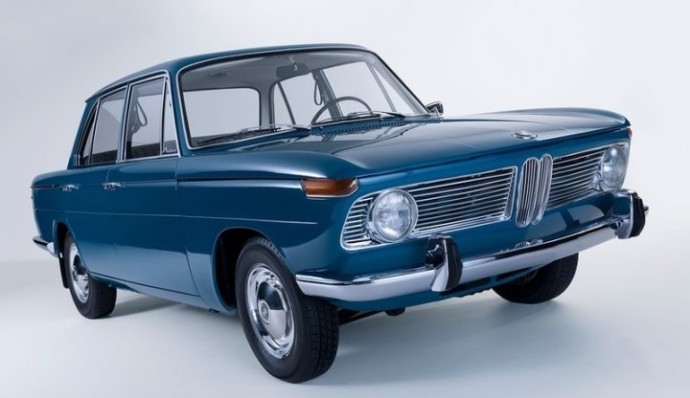 BMW’s success through the 20th century would not have been possible without the 700. Which is why we think it’s high time that this humble little car received a lot more recognition. 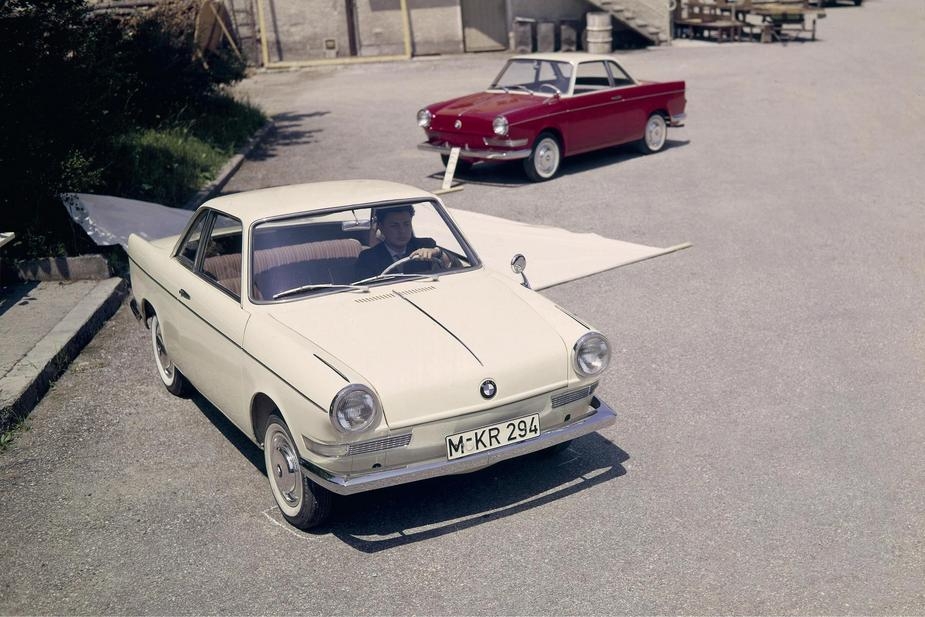 And a little more detail added by UltimateCarPage.com (original):

During the fifties, BMW had quite an unbalanced model range. On one hand there were the high profile luxury cars, powered by the famous alloy V8, while on the other hand the company got most of its revenues out of selling the Isetta bubblecar, based on a design taken over from the Italian Iso company. One of the other main activities was building and selling motorcycles. It was the single cylinder engine of the 250 cc motorcycle that was used to power the Isetta. Apart from that, the motorcycles were also propelled by a 2 cylinder air cooled boxer engine, originally available as a 500 cc but with room to grow in displacement. 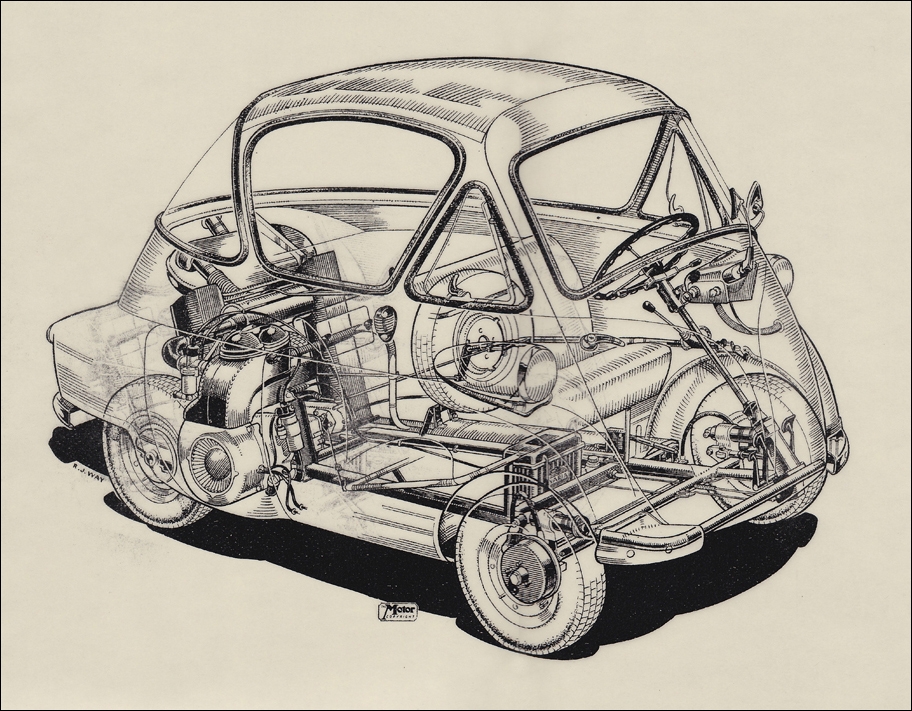 This two-cylinder engine, enlarged to 600 cc, first saw automotive use in the BMW 600 introduced in 1957. This was basically an Isetta, widened at the rear to accommodate a bench for two people and a side door on the right hand side. The front opening door of the Isetta was maintained. The engine produced 19.5 bhp, and the car could reach just over 100 km/h. In spite of its qualities, the 600 did not become the success BMW had hoped for. By November 1959 and after a production of just under 35000 units, the plug was pulled. 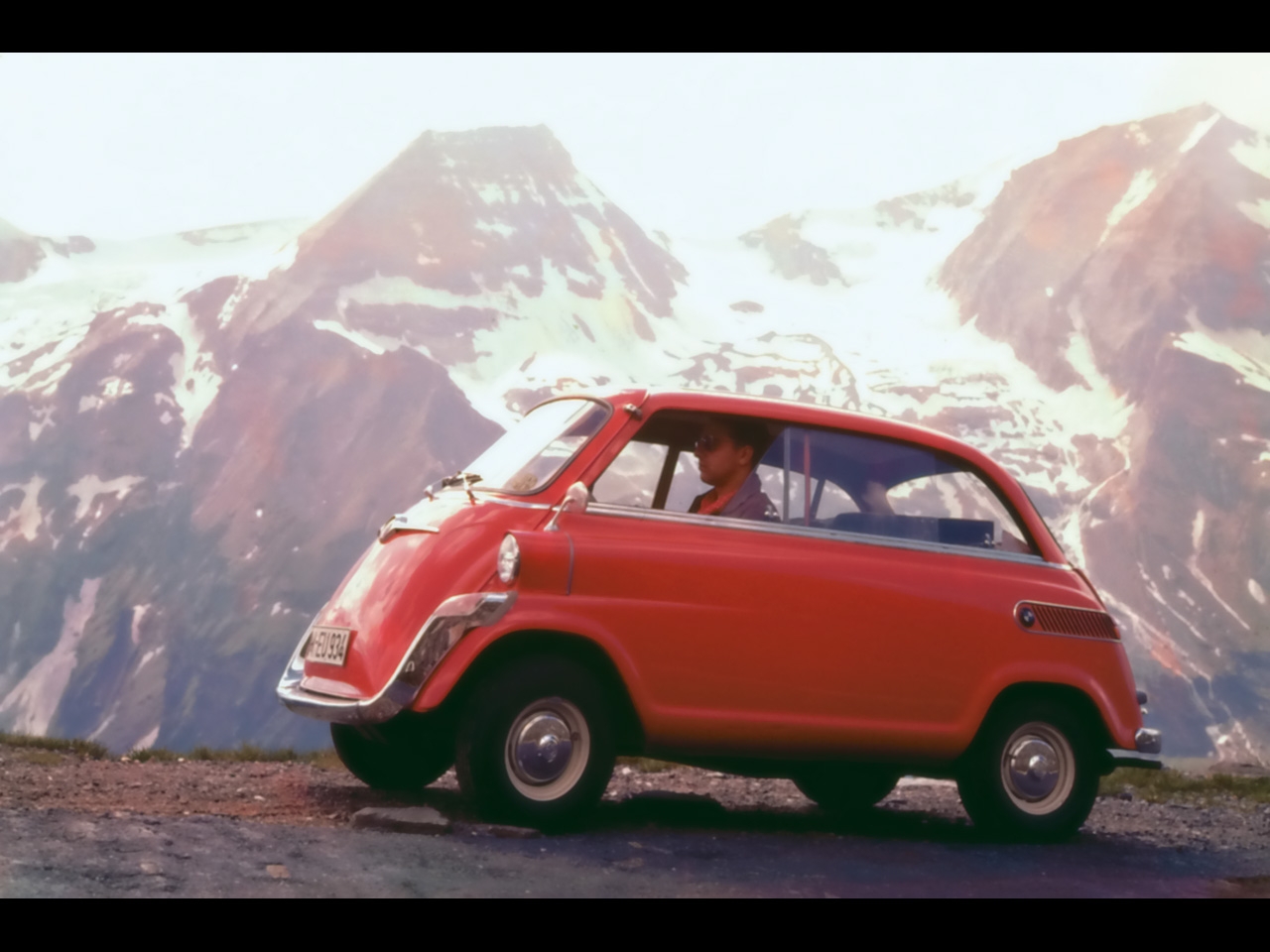 In the mean time, thinking had gone further and already in early 1957 a full four seater car with normal proportions was being prepared. Shortly after, Giovanni Michelotti received an order to produce a prototype, which was duly presented in July 1958. The pleasing lines of the car convinced the board to proceed and by mid 1959 the car went into production. 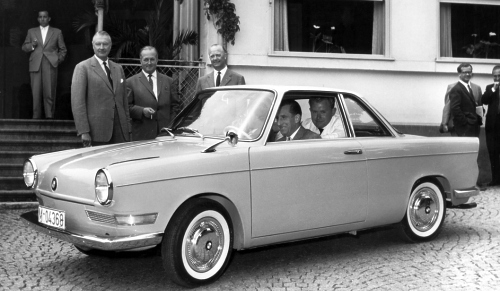 It featured a 700 cc version of the boxer engine, located behind the rear axle. Developing 32 bhp, it had a significantly better specific output than the 600. Interestingly the first body version that was offered was a 2+2 coupe, while the sedan version with a slightly extended roof and more head room on the rear seats came only several months later. 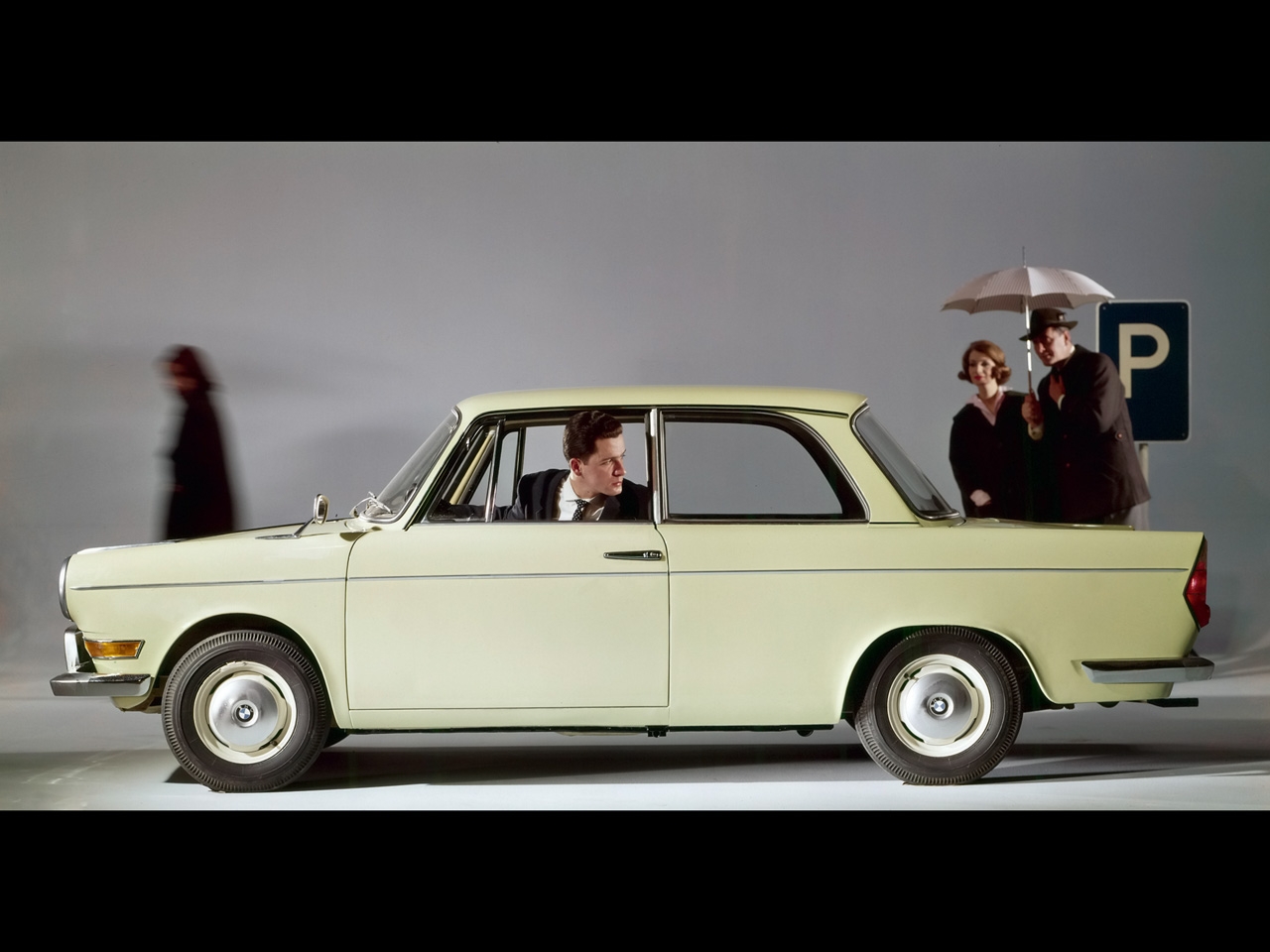 The boxer engine already had sufficient motorsport pedigree. It was not only used in bike racing itself but also dominated the sidecar category for a very long period. Not surprisingly, by mid 1960 a twin-carb, 40 bhp version of the 700 Coupe was offered, dubbed the 700 CS. This car formed the basis for BMW’s first appearance in international racing since WWII. In competition guise the engine could easily be tuned to produce over 60 bhp. 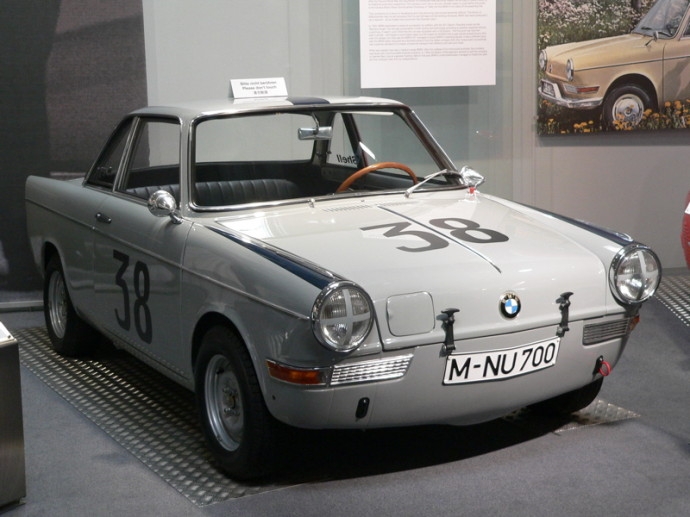 The 700 CS became a familiar sight in the European Touring car races. Together with the sedan, it generated enough cash flow for BMW to develop the 1500; the first modern BMW. The company’s current line can still trace their roots to the 1500, which was first shown in prototype form in 1961. 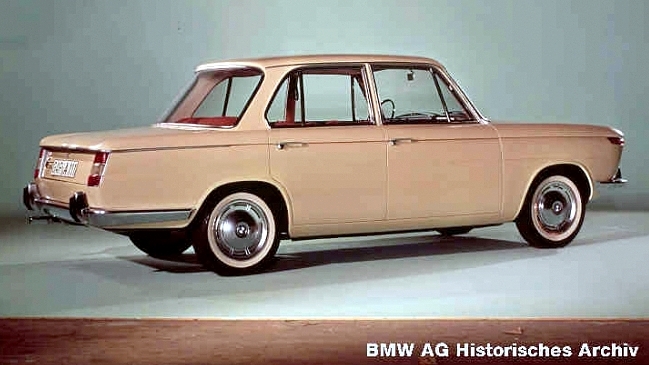 The 700 remained in production till September 1965, and at the end of the line over 188,000 cars (all models) were completed. The car was a great success in many countries the world over, with BMW delivering assembly kits for the BMW 700 to assembly plants in countries otherwise imposing high taxes on completely built-up cars. Hence, the BMW 700 was assembled from kits in Belgium, Italy, Argentina and even – in small numbers – in Israel. 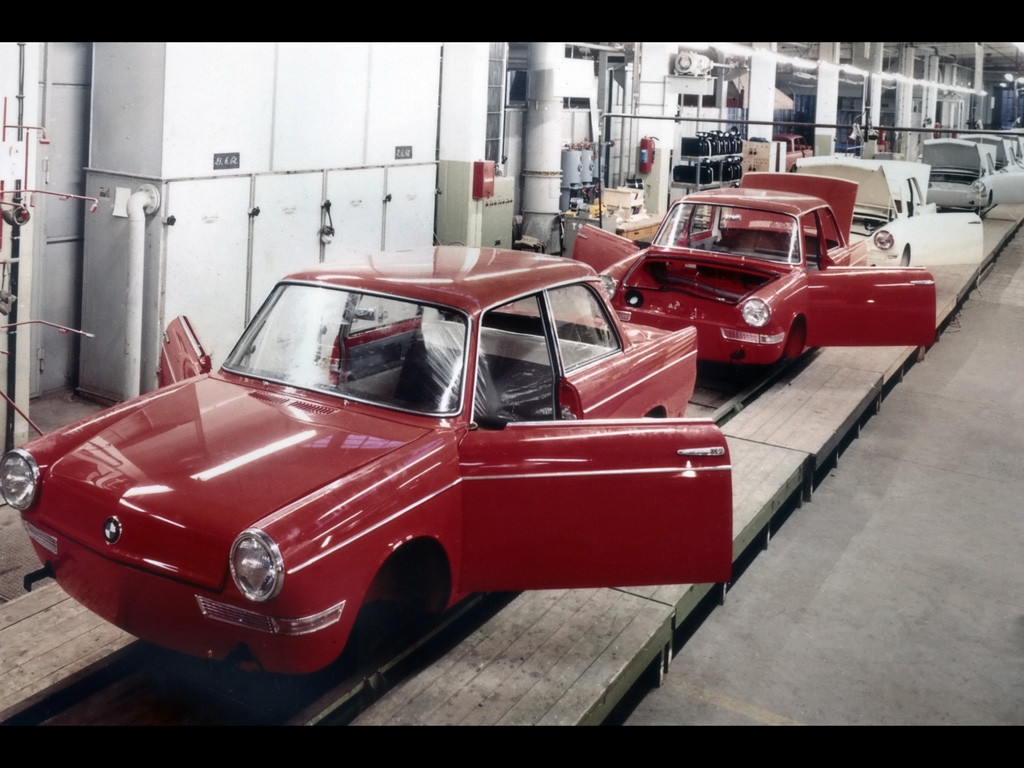 At the end of the day the BMW 700 more than fulfilled its expectations, having given BMW new hope and taking the Company successfully through the crisis in 1959 and on to the final breakthrough to profitable large-scale production.

So it is evident that this car did play a role in BMW’s rise to the upper echelon of automobile manufacturers, but what’s so special about this car anyway, and how would any of these economy cars be exciting enough for the modern BMW enthusiast?

Well, it just so happens that there is one variant of this little 700 that is most decidedly drool-worthy. It was launched in 1960 as a racing variant of the production 700. Barely resembling its roadworthy brother, this prototype spyder was supported by a space frame chassis and clothed by an extremely streamlined body, shaped into aerodynamic ecstasy. 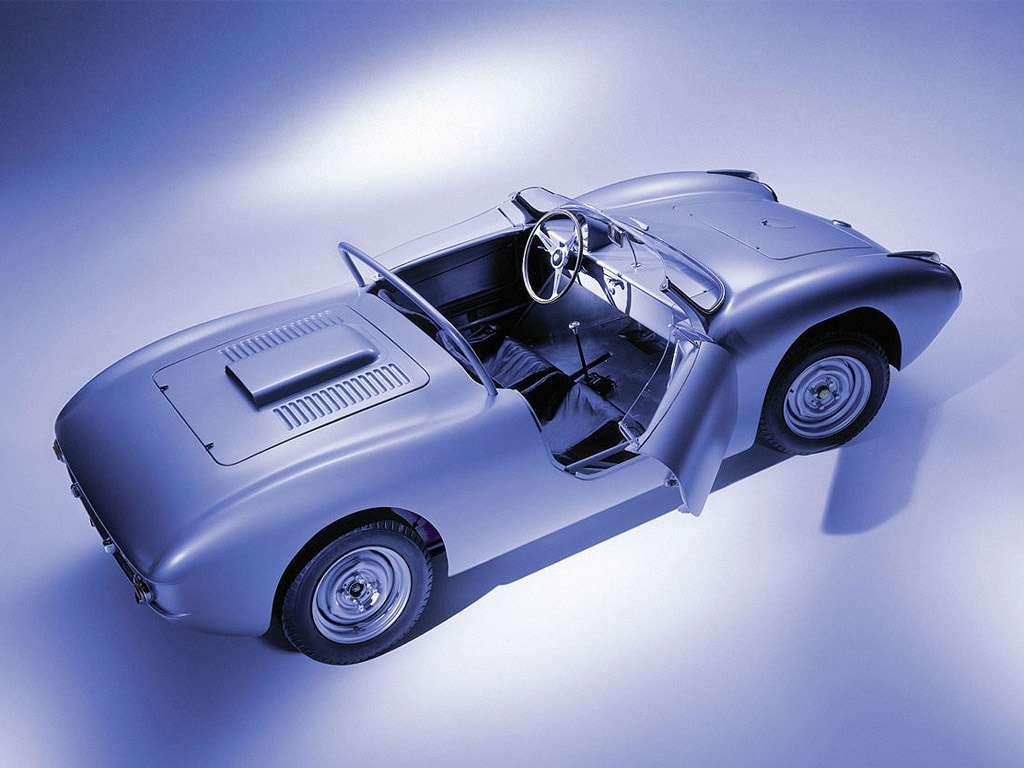 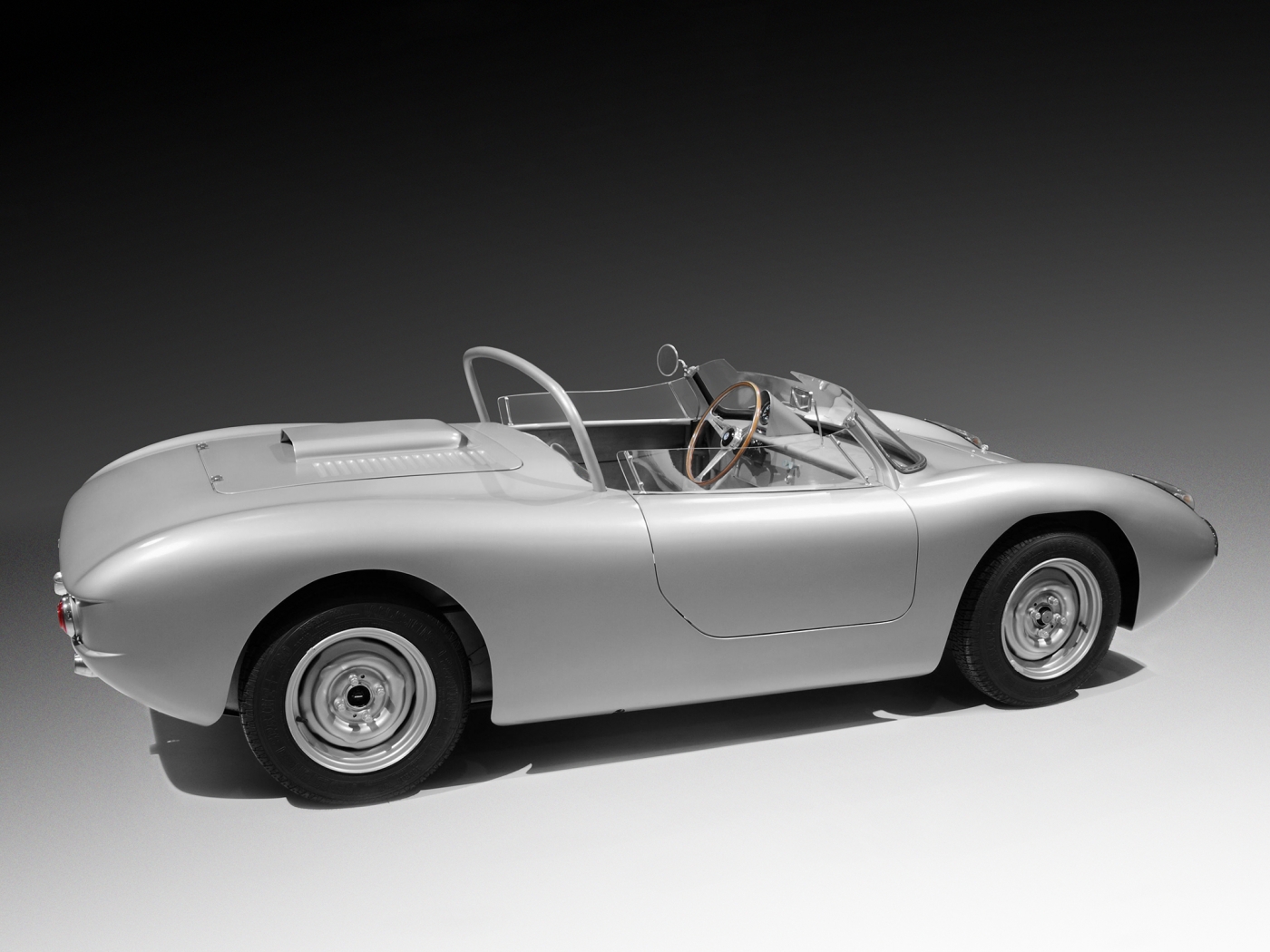 This new racing car was dubbed the 700 RS and specially designed for the popular german hillclimb races. ‘When a new BMW sports car, the BMW 700 RS enters the Rossfeld Hillclimb Race on 18 June 1961, this will be in a quest to test the driving qualities of the BMW 700 at higher speeds and under more dynamic conditions,’ said the announcement at it’s inaugural race. 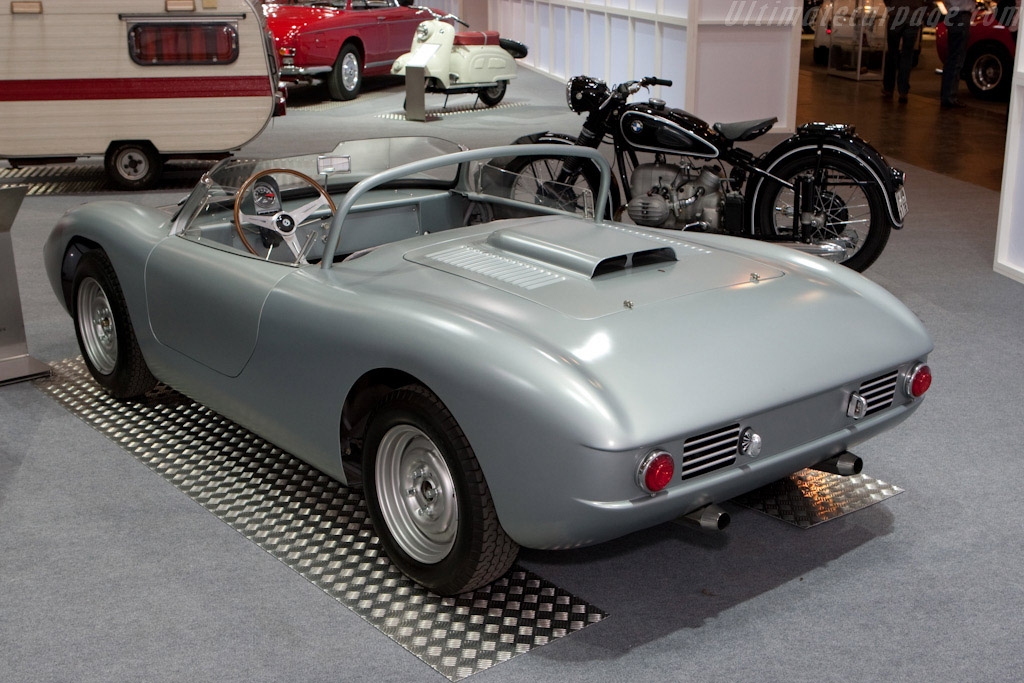 The motorsports career of the boxer engine of the production BMW 700 continued well into the 1960s. In early 1961, BMW developed a very special version of the engine as an extension of their motorcycle engines. It was a flat-twin power unit equipped with two kingpin driven overhead cams per cylinder. 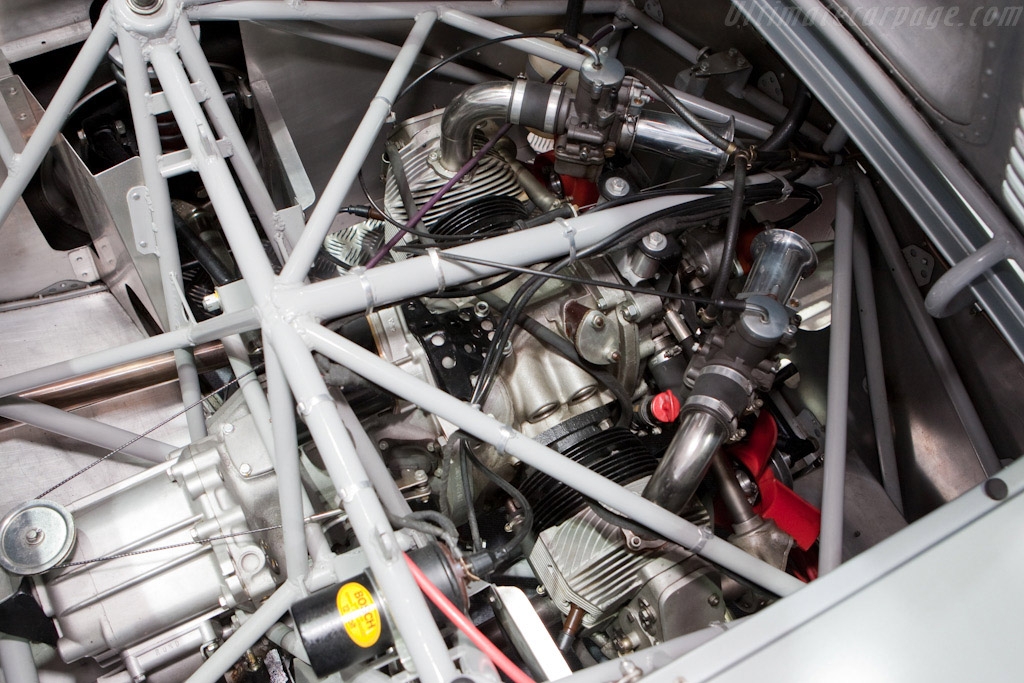 It got its fuel mixture from two 36 mm Dell’Orto Carburetors developing an amazing 70 bhp at 8000 rpm from just 700 cc’s. Power output equates to 100 bhp/liter, which is quite respectful from the block of an economy car of the time! The engine was placed into the tubular frame chassis, this time in front of the rear axle (the standard 700 was rear-engined). 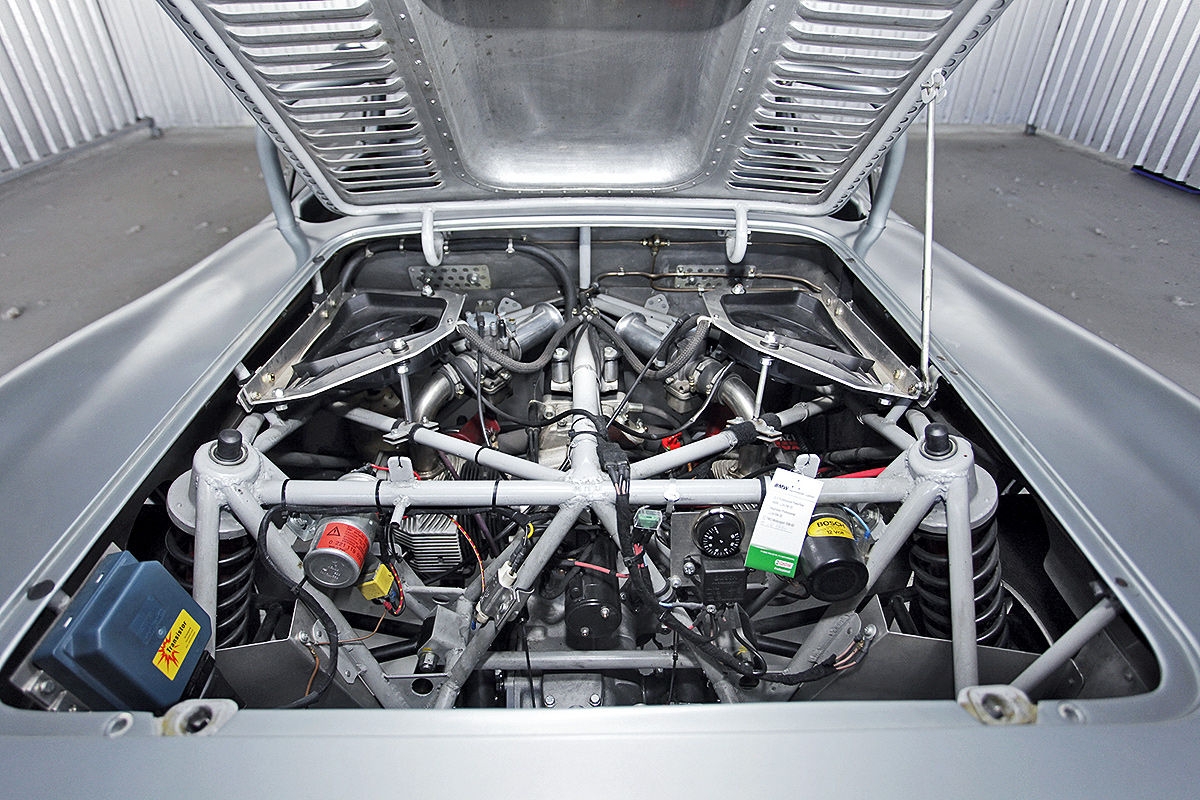 Interestingly, the only components shared with the production BMW 700 were bits of the axle and an engine block. BMW’s small racing machine boasted a tubular space frame, which sat inside a special lightweight aluminum body. 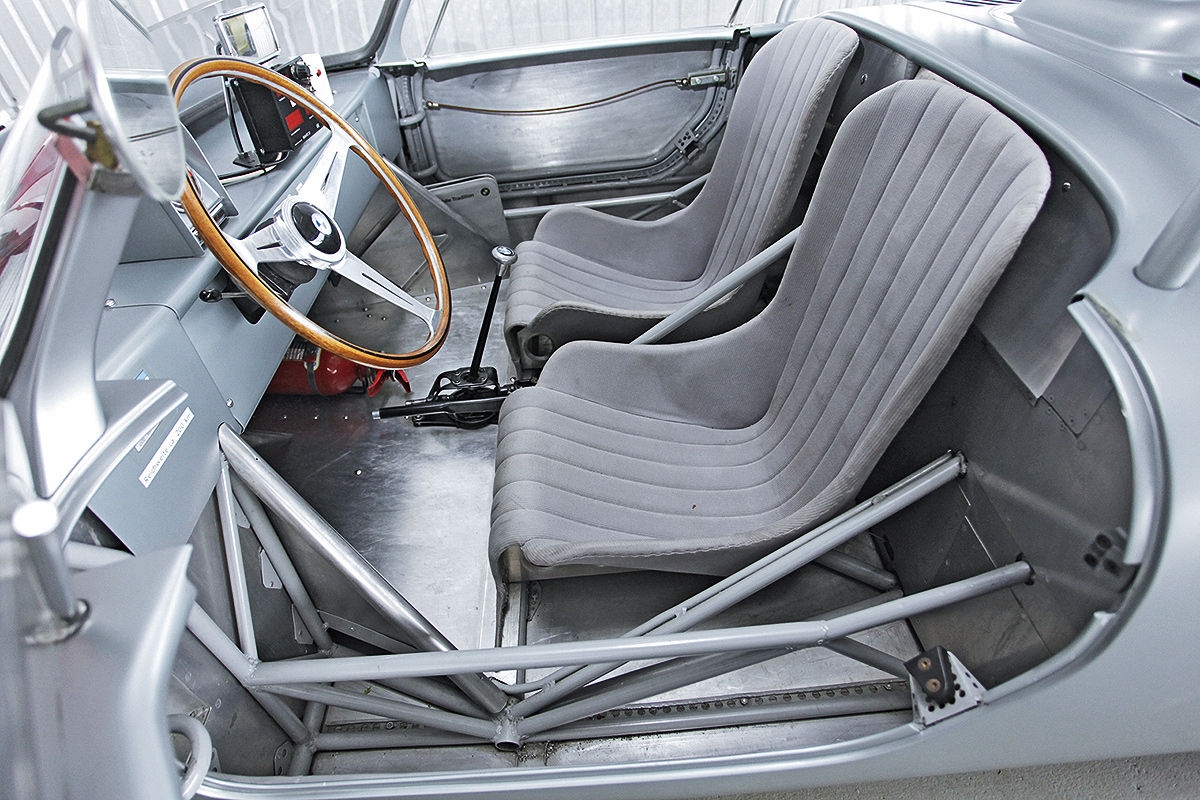 The cockpit is elegant due its simplistic and robust nature. No gizmo’s or gadgets are needed besides a rev counter, and the other basic driving controls; windshield wipers, rear view mirror, shift lever, and emergency brake. 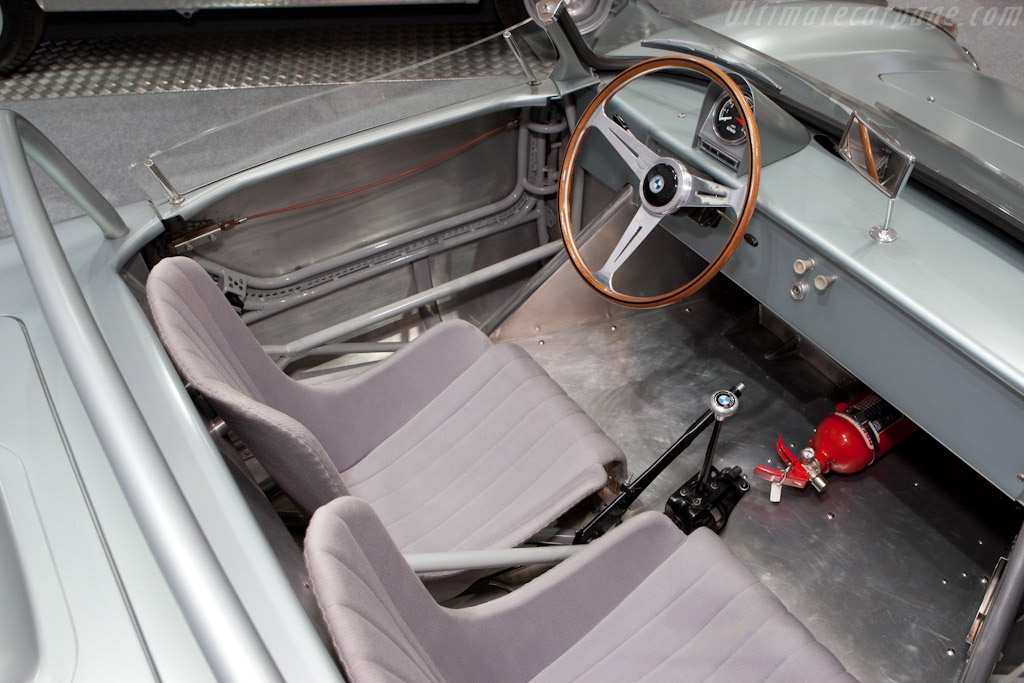 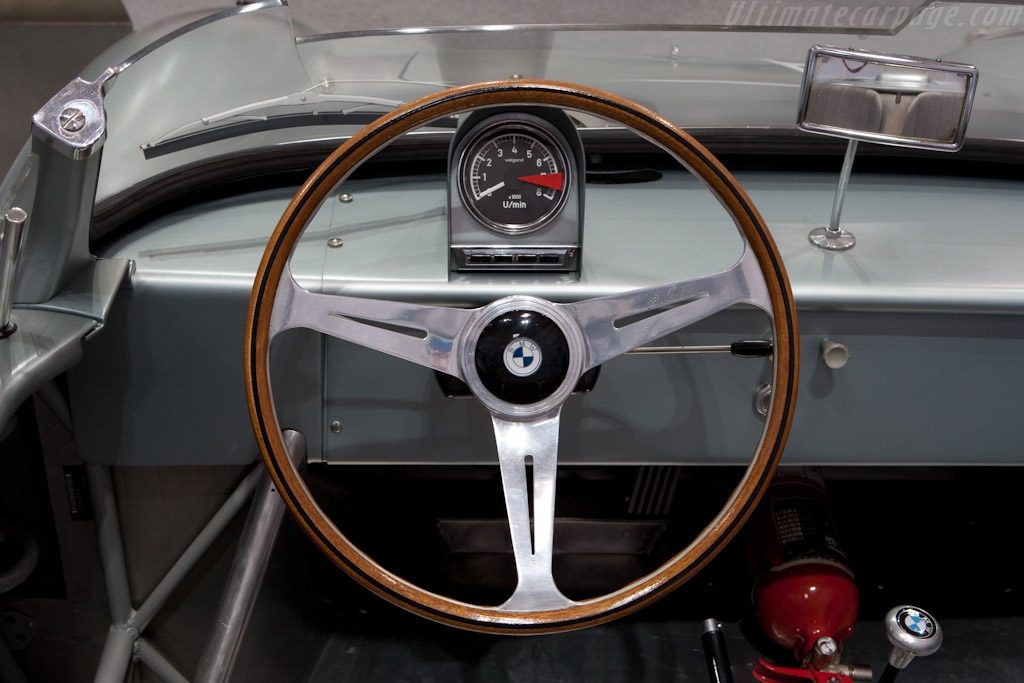 All 70 hp came from a side-shaft power unit, and the complete vehicle weighed less than 600 kg (1,323 lbs). When matched with the dohc engine, the 700RS delivered 127.27 bhp per tonne (equivalent to an E46 328i), and gave a sporty ride. All of this combined with the simplistic cockpit  helps the driver to focus on the main goal of driving– driving fast. 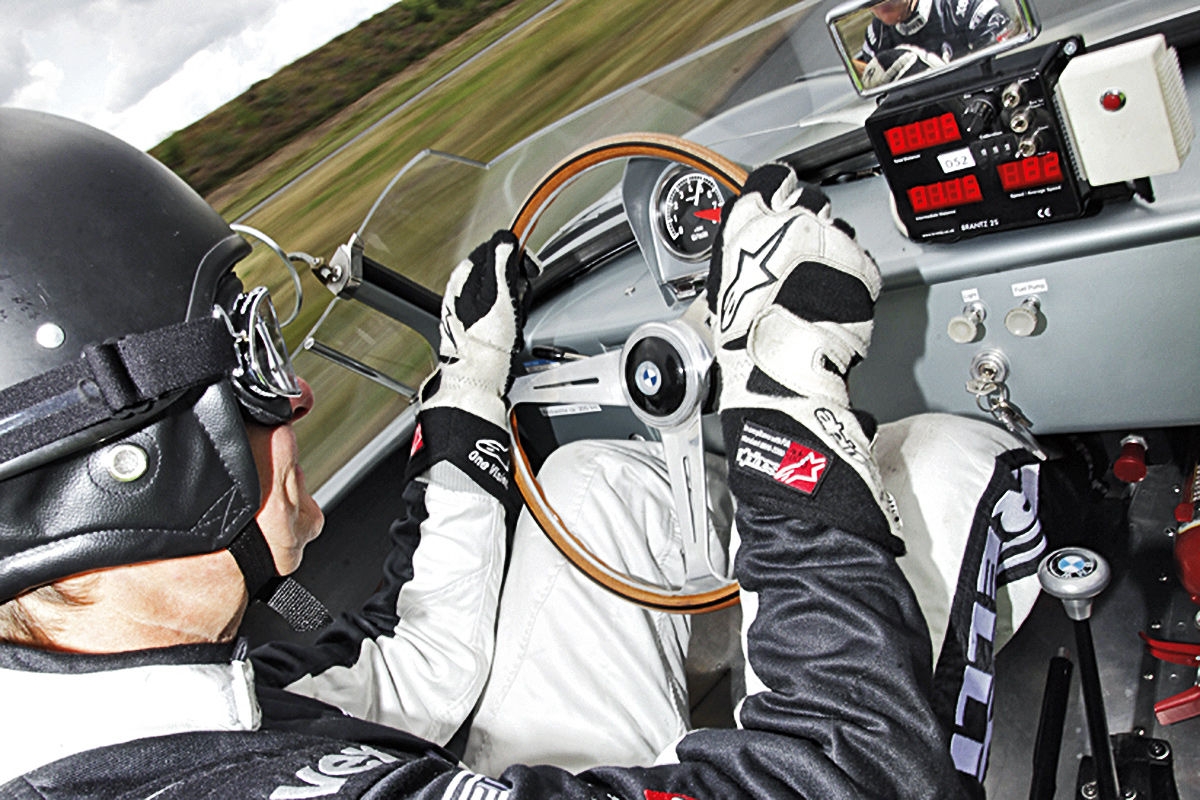 Depending on the transmission ratio, this small but dynamic performer was able to reach a top speed between 150 and 200 km/h (93 and 124 mph). The aerodynamic shape only helped to achieve the top speed. 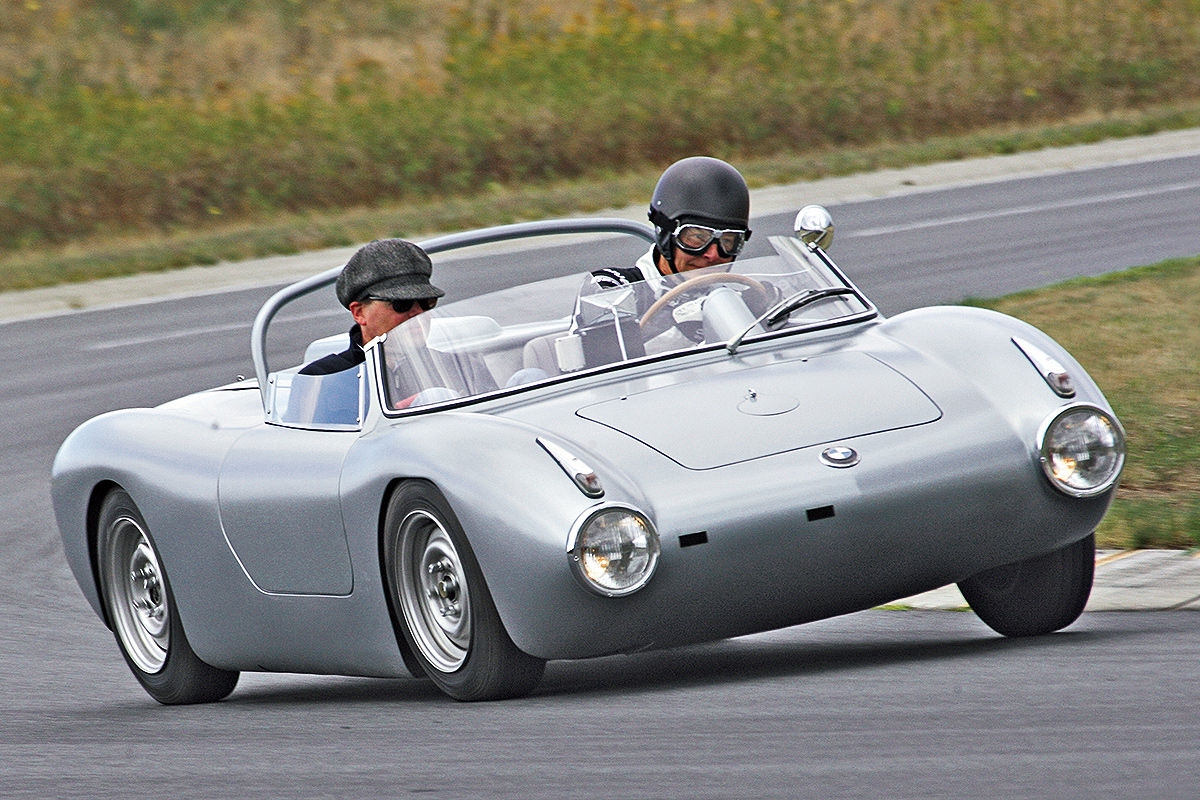 The 700 RS made its first public appearance in June 1960 in the Rossfeld Hill-Climb Race. And in the early ’60s drivers such as Heinz Eppelein, Hans Stuck, Alexander von Falkenhausen and Walter Schneider brought home numerous victories in this racing car. From its debut in in June of 1961 until the 1963, the lightweight BMW dominated its class. It had enough success for Walter Schneider to bring home the German Circuit Championship in 1961. 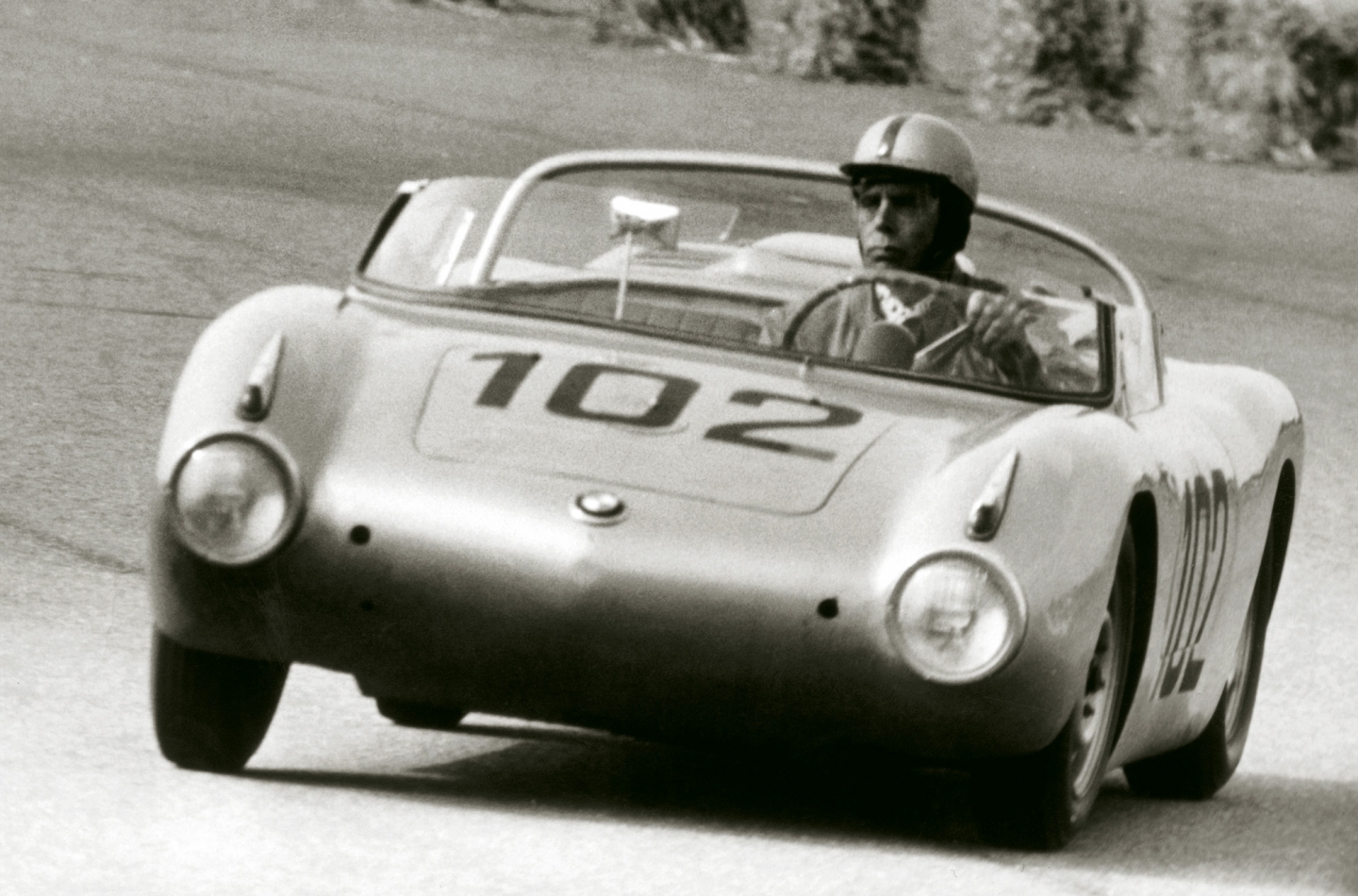 At the same time the production 700 had already become the ideal car for young drivers making their first appearance in racing at the time. A very good example is Hans-Joachim Stuck, who has great memories of this great car; ‘I was just nine years old when I accompanied my father to drivers’ courses held by Scuderia Hanseat at the Nürburgring race track. And there I was able to drive a BMW 700 myself, since it was a closed circuit reserved entirely for our racing activities.’

The dynamic BMW 700 remained seriously competitive and in most cases even superior for years to come, boasting various levels of tuning and engine power. And when BMW’s two-cylinder sports car finally reached the end of its career, Hubert Hahne, one of the big stars at the time in touring car racing, had brought home the majority of his wins in this outstanding performance model. 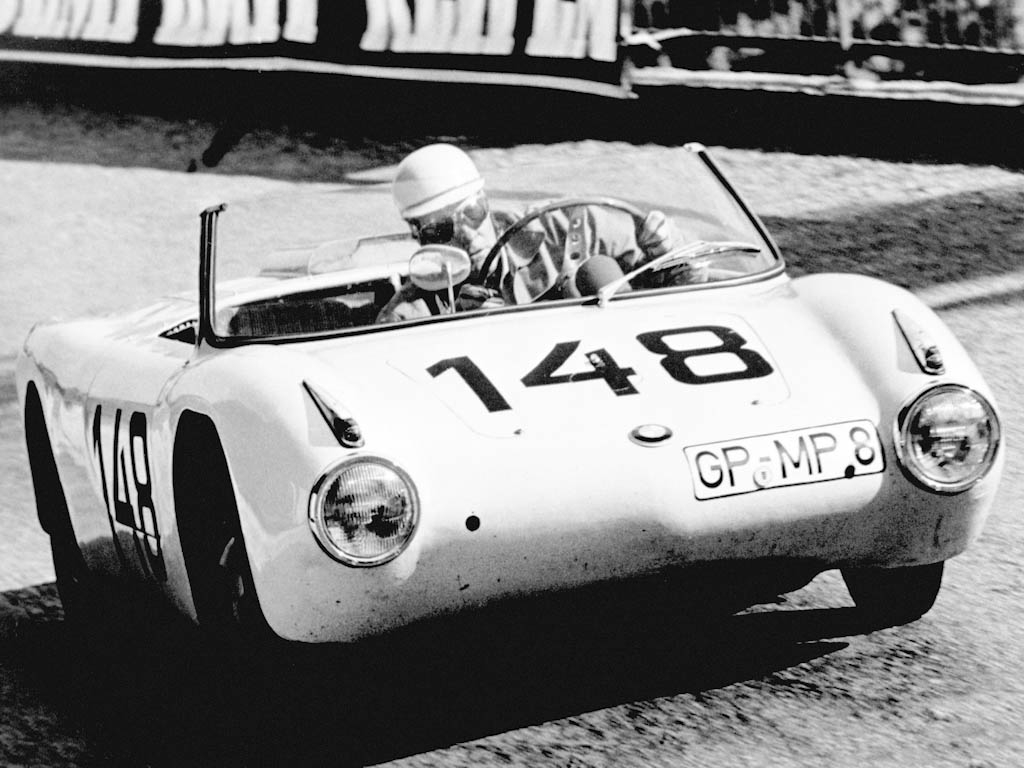 Some sources say as many as 19 were produced, but BMW states that only two were ever built. Now, there are said to be only two remaining in the world. BMW still own’s one of the cars and rumors say that the other car exists in Florida. 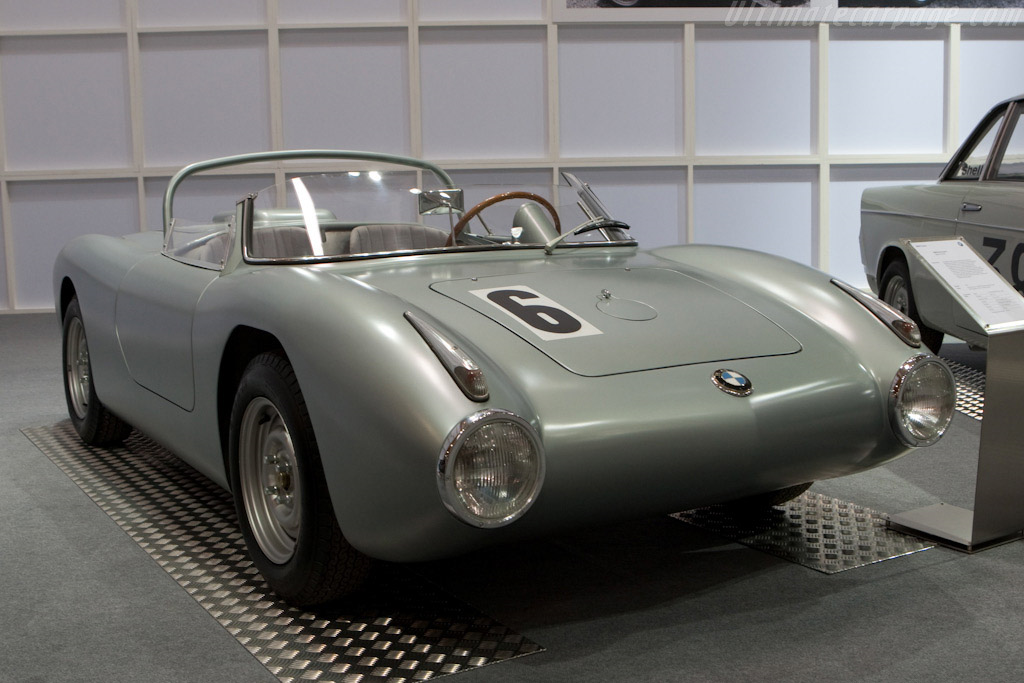 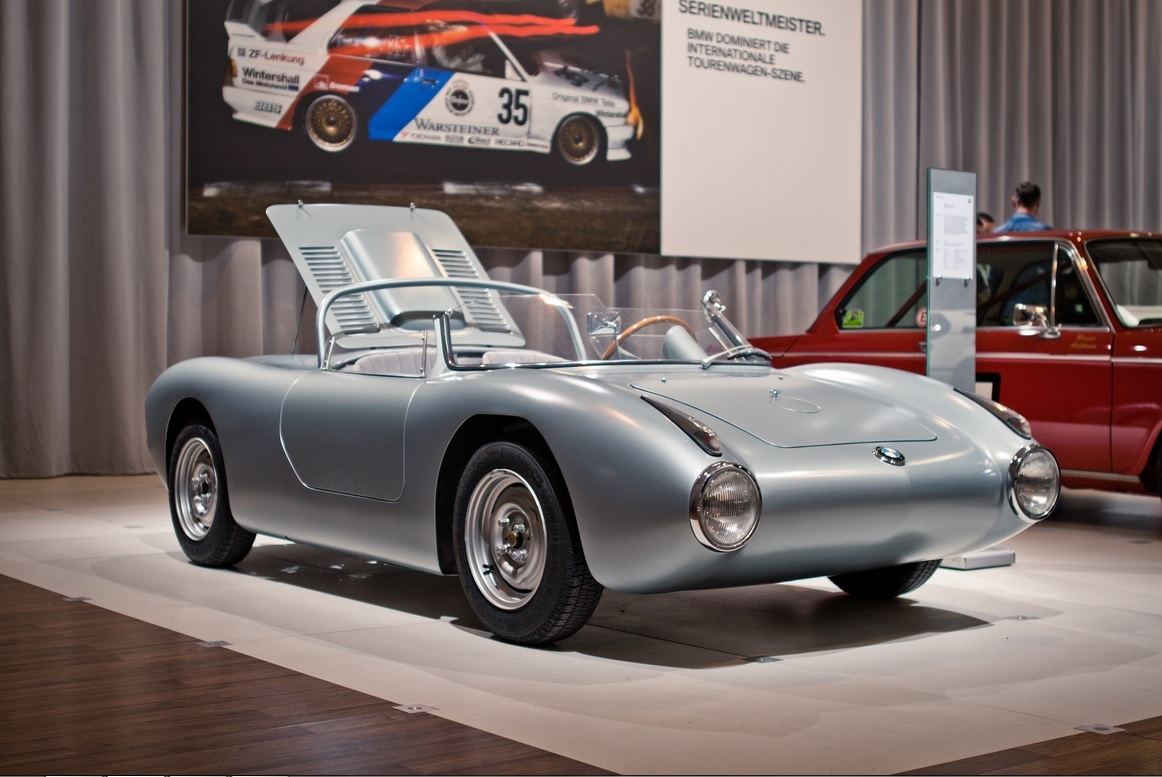 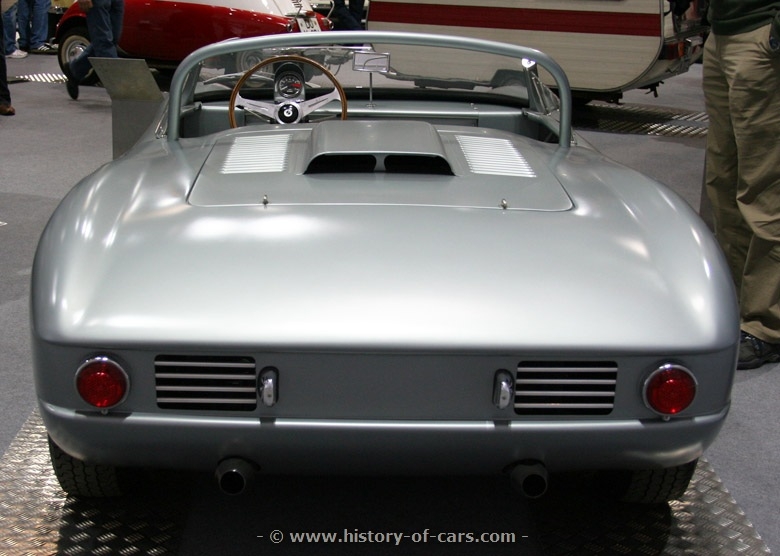