This week’s article was found on BMWblog where they regularly put out great content. This week is especially important as one of the ~750 1 M owners in the US shared his perspective on the car as a daily driver. Enjoy!

“I don’t believe in driving a beater” is what I said when i signed a contract to work as a Physician at a University Hospital located 65 miles away from our apartment in Brooklyn. So back then I bought a brand new 2011 Audi A3 quattro 5-door hatchback to celebrate my new job. I used the A3 for about two years and the commute started off being difficult, however subsequently became habit—and then became something much worse; painfully boring!

I traded my A3 in for a 2013 BMW 135is with a 6-speed manual. Wonderful, wonderful car. Thoroughly entertaining and my first BMW. It felt like I was in possession of the true ‘modern’ interpretation of the 2002tii. I loved the car but there was only one lingering problem with the 135is; the fact that the 1M existed before it. 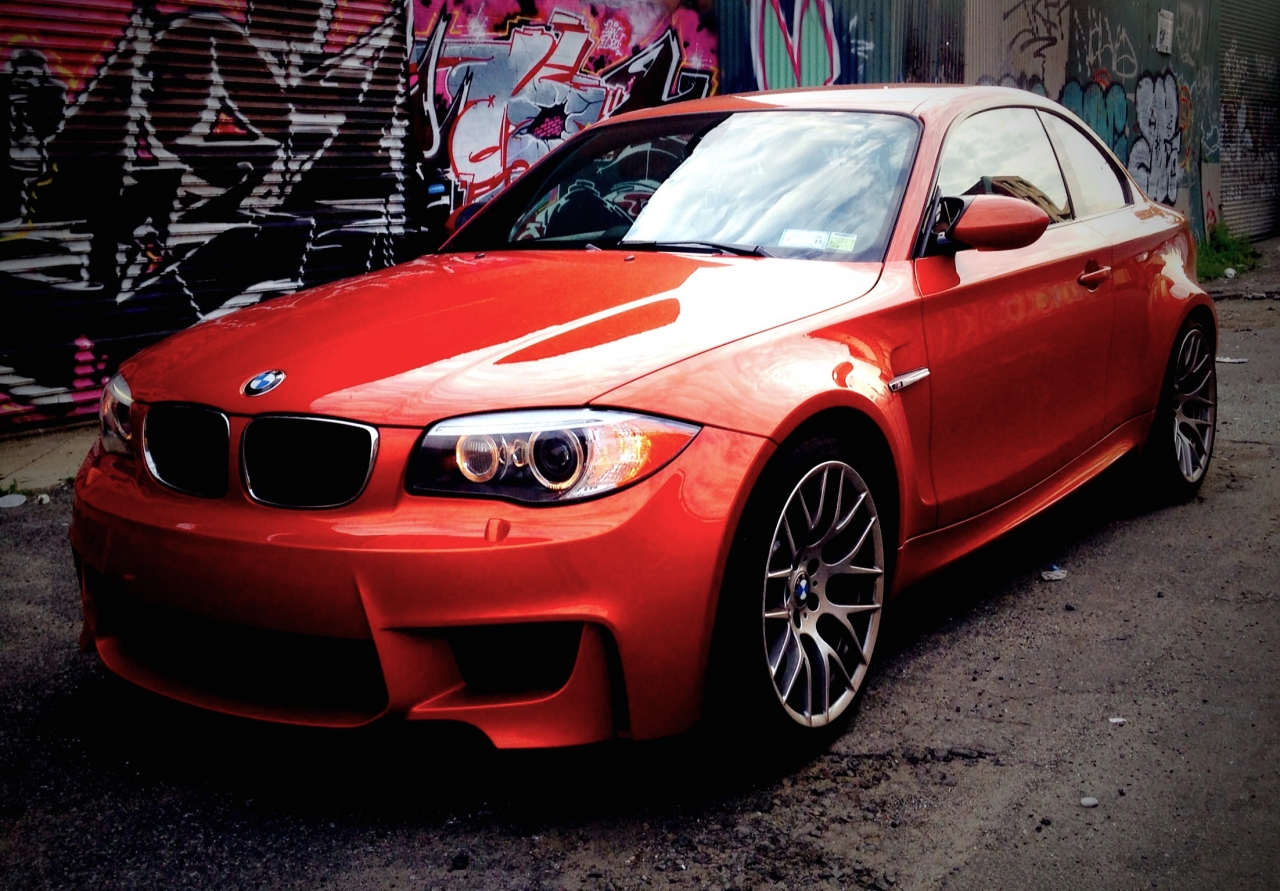 I spent hours and hours stalking every 1M for sale ad in the U.S. and would email sellers, call dealerships, and save photos. After a test drive of a 1M, I realized the 135is was the nice tidy cup of ice cream, the 1M felt like the full fat, eat-butter-out-of-container, mutated and beastly version. It was nice that I was driving the ‘next best thing’ to the 1M in the form of the 135is, but it didn’t have the M3 steering rack, axles, brakes, suspension, wheels and LSD.

It also didn’t have a hilariously wide fenders and stance which only previously existed in my imagination! My wife knew about my 1M infatuation and she told me I should buy one.

So I traded in my 135is only 10 months after getting it and got myself a Valencia Orange 1M. The day I picked it up I literally felt like I was 7 years old. I had to stop five times during that two hour drive home from Connecticut just to contain my excitement.  Just for that feeling alone, it was worth spending the money. 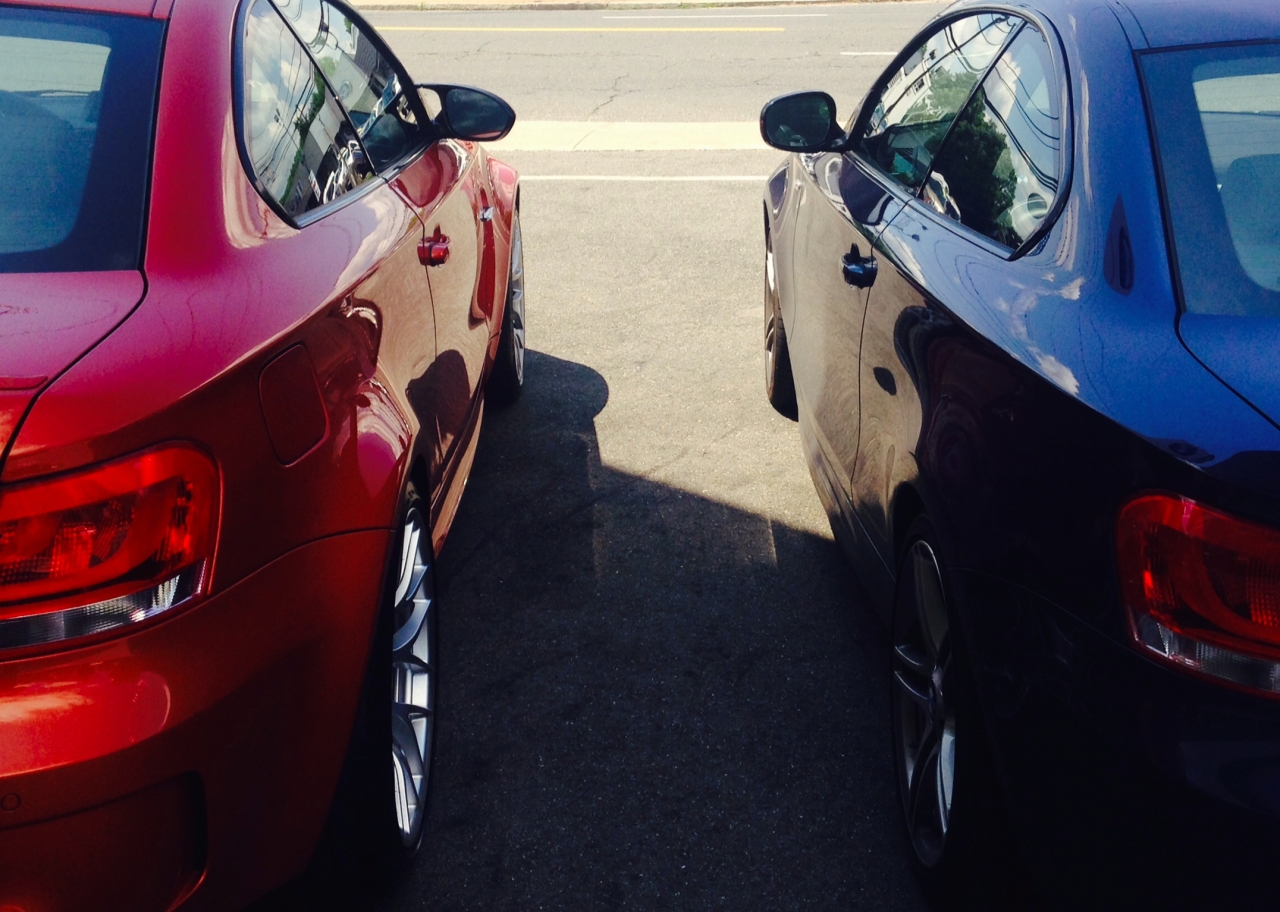 I’m not a collector, I’m not a show-off, and I’m not a materialist. I just want to enjoy driving. I drive 130+ miles a day. I sit in traffic jams. I drive my amazing wife around the city. I break loose on open and empty freeways. I sit at traffic lights. I get gas. I get coffee. I pick up groceries. I buy food. I drive around NYC. I take weekend trips out of town. I pick up my family at airports. I drive for emergencies to the hospital in the middle of the night on occasion. I have important phone conversations in the car. I listen to my favorite records. I’ve also been known to get up early on the weekends to go drive around aimlessly.

I do all of these things and many more in my limited production, Valencia Orange BMW 1M as my sole daily driver. I wouldn’t have it any other way. Do I worry it’s going to get damaged around NYC? Sure…but it doesn’t stop me from living. 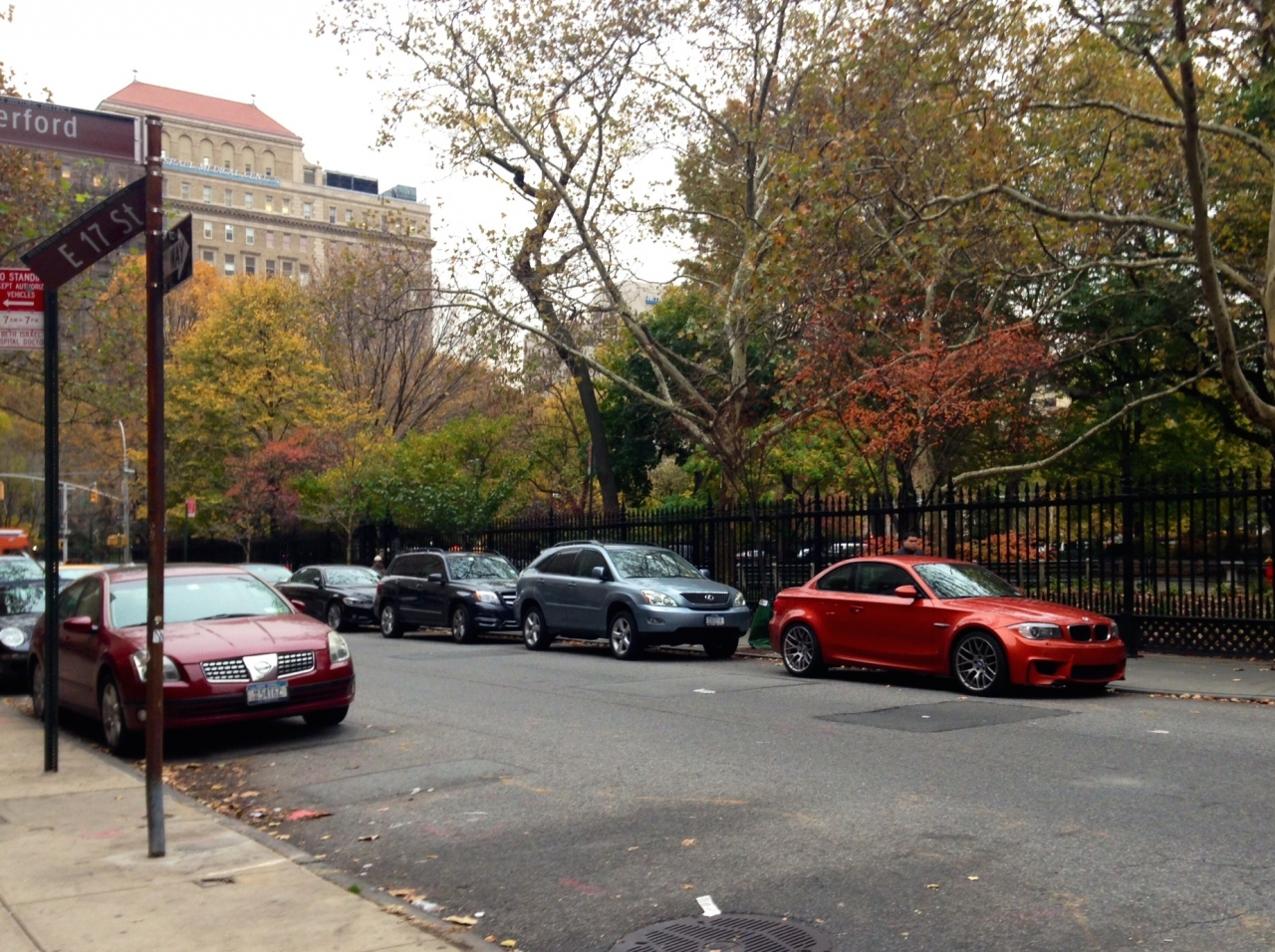 My philosophy is that I don’t buy nice things for ‘special occasions’. I think every day is a special occasion and for me material possessions are just assistants to making our lives more enjoyable and entertaining. Most of us work hard to make money to have a decent life, live in a nice place, eat nice things, and try to get all of the resources that can help us have a fruitful and pleasant life.

My wife works in Midtown Manhattan and we love living in Brooklyn; so moving closer to my workplace outside of NYC was not a consideration. After 3+ years of doing the commute in and out of NYC every single day; I still LOVE driving. The only thing I learned about long distance commuting is: don’t buy a boring car! Buy the best car you can for your daily commute!

The 1M was my ultimate ‘want badly’ car four years ago when it was launched and since buying it the 1M has made my commute an event and celebration of motoring every single damn day. There are days when I leave my apartment at 5:30am and leave the hospital at 10pm at night.

Want to know what a great feeling is? Walking out of an exhausting, draining, challenging, and eventful day at the hospital and seeing that beautiful Valencia Orange 1M waiting for me in the parking lot. Wrapping my hand around the Alcantara steering wheel, starting it up with a growl, and then being inside one of the finest sports cars made in recent history.  Every day of your life should be an occasion, so saving an object to preserve its value is putting an object ahead of your life.

The memories you keep are far more valuable than the depreciation you pay for. 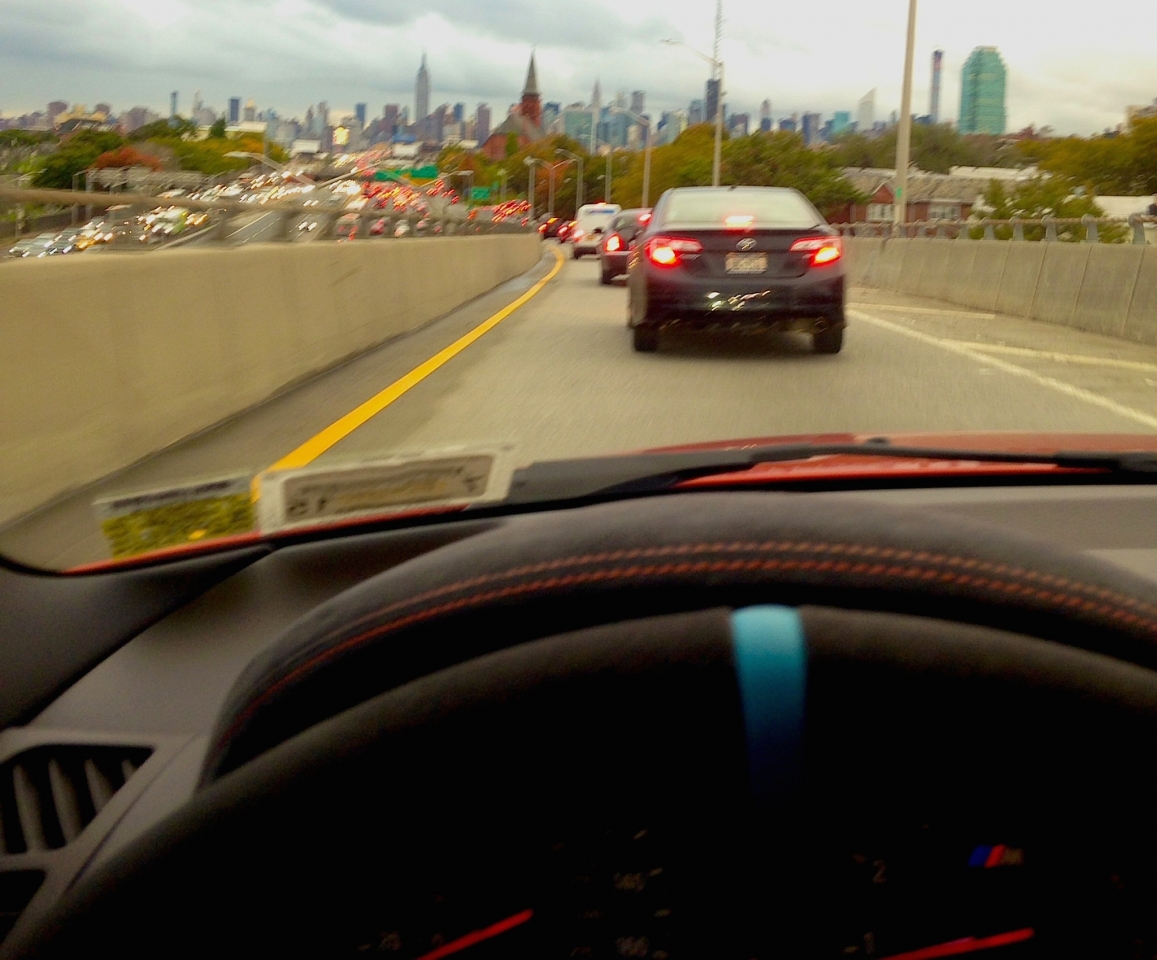 So what is the 1M like to live with in NYC and to be used as a ‘heavy commuter’ daily driver?

It still feels special every day. I’ve become used to the staring, the pointing, the waving, the thumbs ups, the children waving at the orange car through the school bus, the JDM kids wanting to street race me, the conversations at the gas station, the comments when I get out of it in a parking lot, the fact that the “Top Gear generation” seems too know exactly what this orange 1M is all about.

I’m not a snob. I love talking cars and I love to discuss the 1M whenever I get asked about it. In terms of driving it, the 1M is an ‘M car’ in terms of suspension settings and dynamics. It is relatively harsh when compared to non-M cars and when compared to most other cars this side of a Porsche. The ride can be jarring on the rough (often terrifyingly poor) streets of NYC and I have quickly learned which roads are meant to be viciously avoided. I have had a violent blow-out of a tire on the Expressway through Queens when a shiv/scalpel (not sure what in the world that was doing on the freeway) inserted itself through my rear 265/35/19 Michelin PSS and blew it out.

In fact I’ve had several nails embedded in my tires…but oh well! Things happen; no big deal. I’d rather they happen to me in a 1M than in a “beater.” 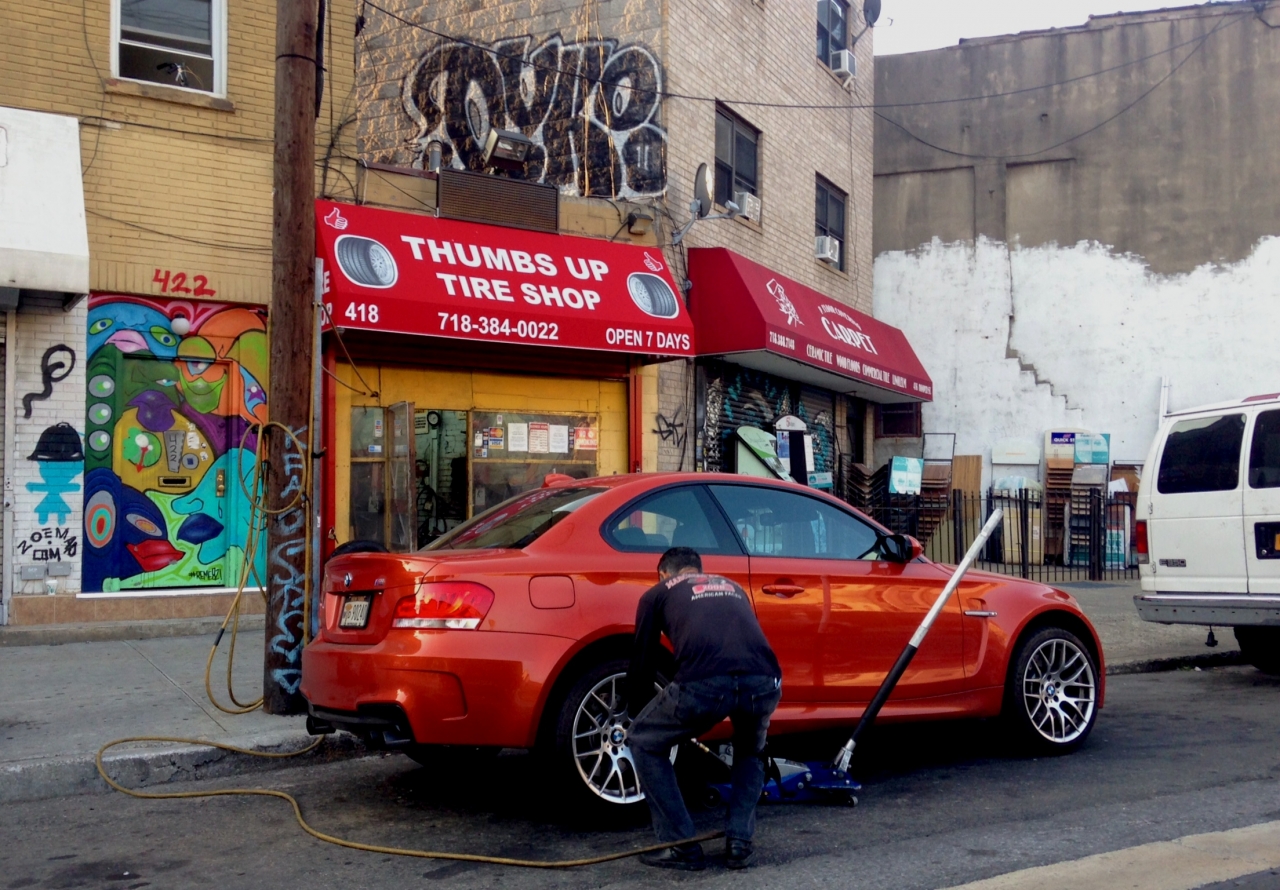 The steering is immediately responsive on the 1M (same steering rack as the E9X M3) and I find it to be totally joyful in its old-school hydraulic setup. The brakes are grippy, safe, and confidence inspiring. I feel I can react in the 1M to anything thrown at me in traffic. Anyone who has driven in NYC knows that there are pedestrians, cyclists, taxis, buses, dogs, kids, people who run traffic signs, people who drive like they’ve been stabbed in the ass with a habanero-coated needle.

The N54 Twin Turbo ‘factory tuned’ version used in the 1M is just a beautiful engine. The torque overboost (to 370lb/ft) never fails to light up the rear tires when used with a lead foot and the 335hp (wheel HP according to most dyno testing) is an active beast of an engine when compared to other modern engines. By most accounts, the N54 was a very special engine and even more special when in 1M or Z4 form (which also had a similar tuning). The 6-speed manual (now being used in the F8X M3 and M4) transmission is perfect, albeit has taken practice to really feel comfortable with. The clutch is relatively light, and the “M” button transforms the throttle response into a swift kick in the pants.

I do not plan to modify my 1M at all; except for a Vorsteiner exhaust which will be put on the car sometime this spring. Otherwise, there is nothing more I could ever want in a sports car. I felt that way about the 1M before I bought it and I feel that way even more after driving it for the past nine months. It has exceeded all of my expectations.

The 1M can be very animalistic in its behavior and it feels like a caged angry bear that is constantly trying to punch above its weight: wild, a bit reckless, a bit unhinged, but powerful and capable. As someone who has a great appreciation for older sports cars like the Alpine A110, BMW 2002, Alfa Romeo GTV/GTA, Lancia Fulvia, and NSU TT, the 1M feels like it captures the ‘madness’ of those cars in spirit. There is a certain amount of intangible madness built into this car. A Frankenstein-type of of character which makes it feel special beyond its price or status. 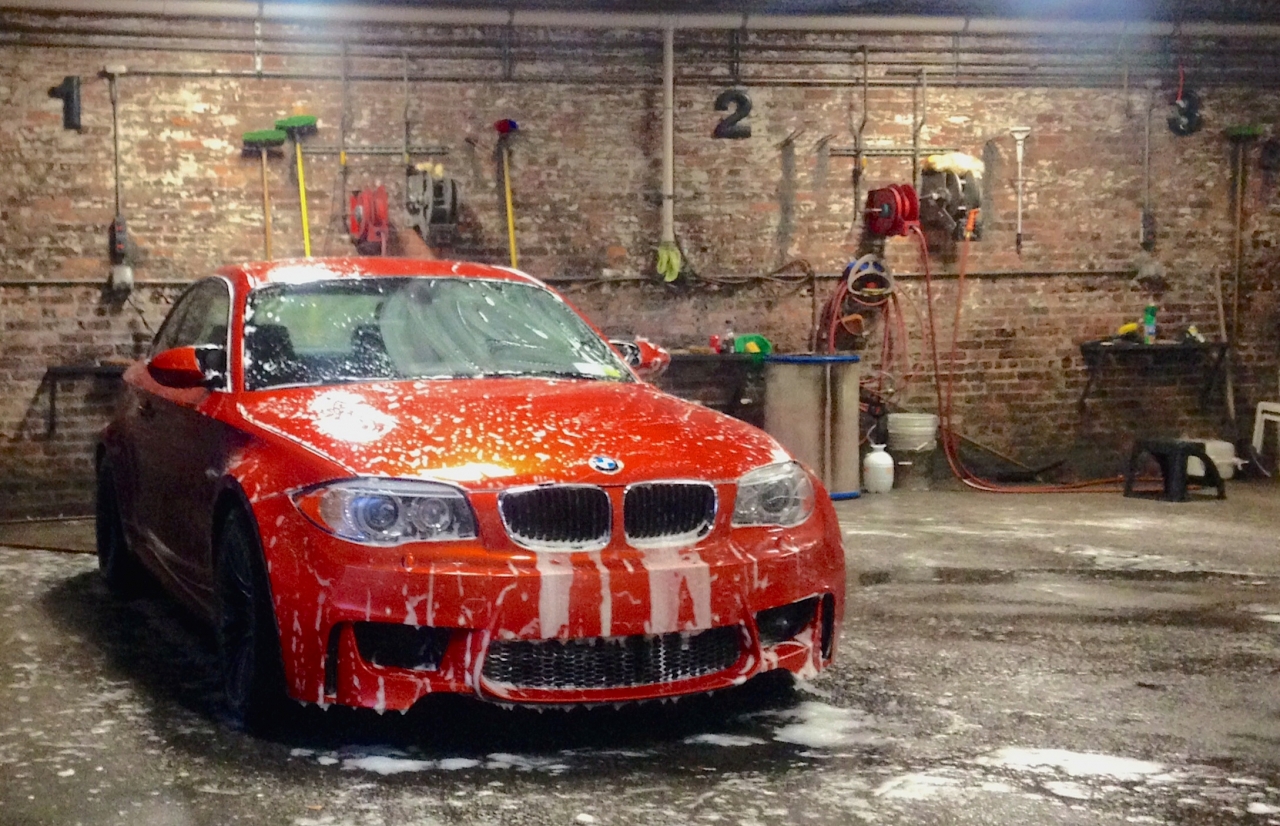 I daily drove the 1M this entire winter. In freezing rain, in snow, in blizzards, in rain, in slush, you name it! I ran 235/40/18 Nokian Hakkapeliitta R2 snow tires (Nokian invented the snow tire in 1934).

Firstly, these tires are amazing. Forget your Blizzaks or Alpins; if you care about driving in snow, Nokian snow tires are the way!

The 1M was unbelievable this winter. Zero issues in any amount of snow: deep, icey, or shallow. I can’t even remember a single time this winter where I felt any loss of control…oh wait I do remember. I was doing massive amounts of donuts every time it snowed in the large, empty university parking lot near where I work!

After driving Audis for several years, I have never missed AWD since switching to RWD with great snow tires. It’s a shame that people don’t drive their sports cars in the winter as the enjoyment is immense with the right tires! I drove most of the winter in MDM (M Dynamic Mode) as I felt more control over forward motion rather than traction control interference going overboard.

The 1M never missed a bit this winter and it was a heavy winter! 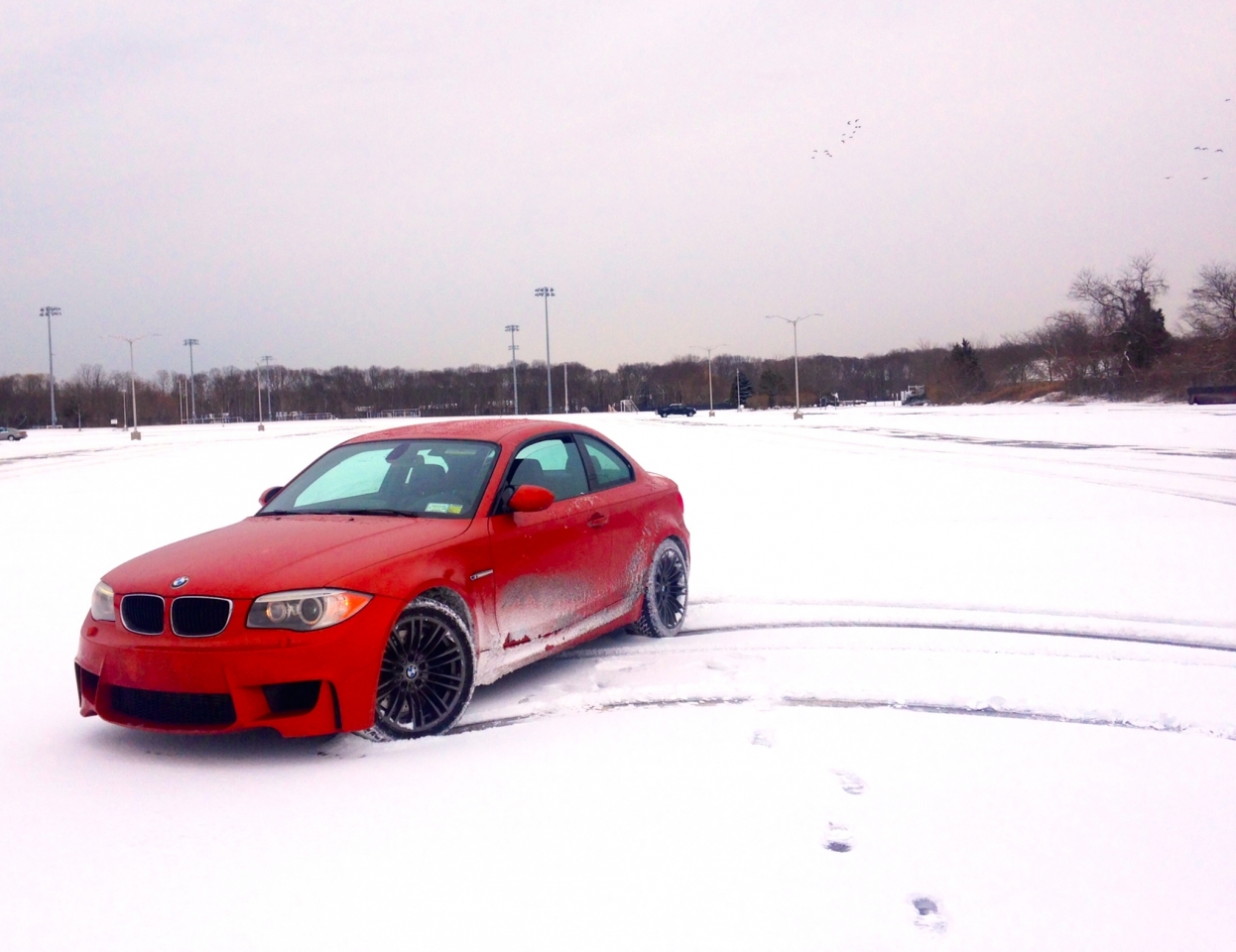 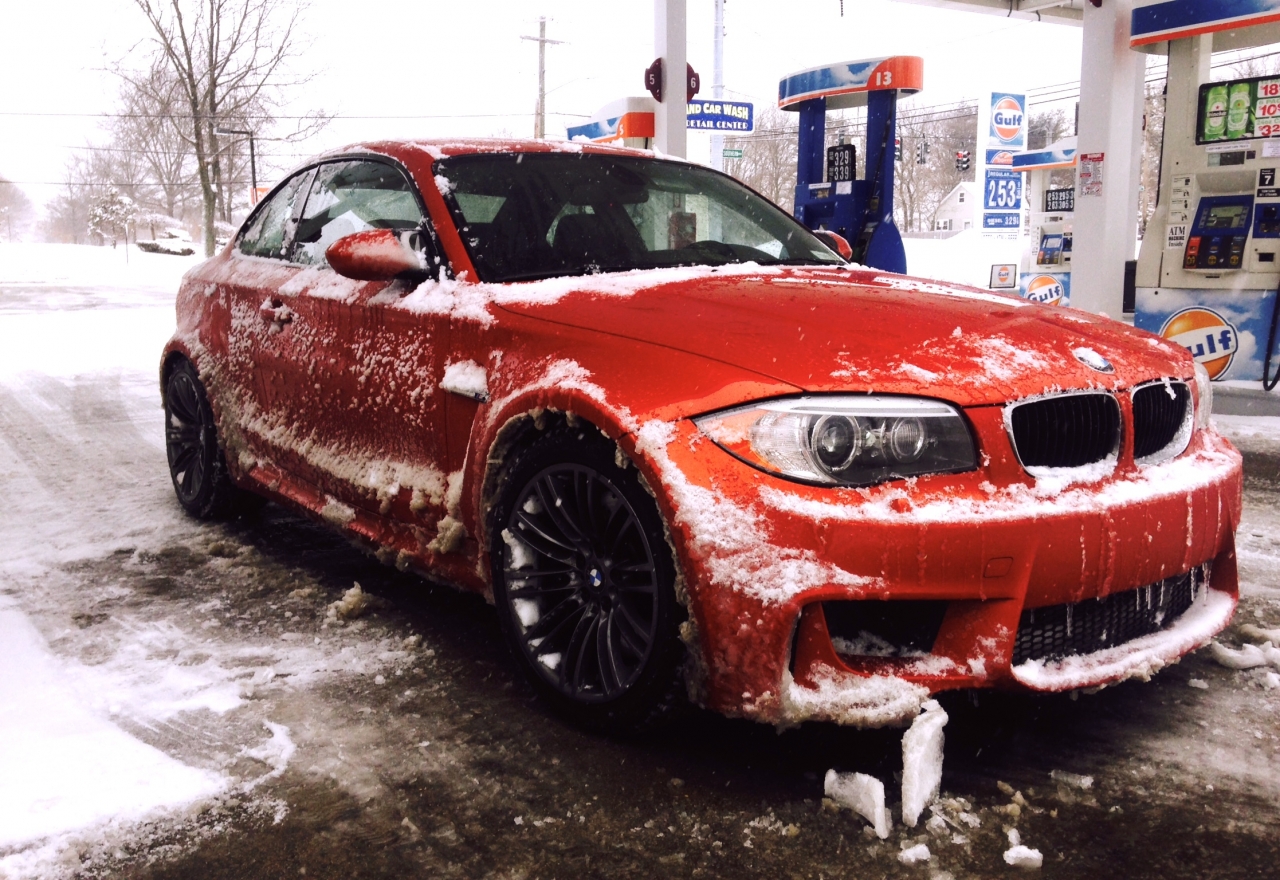 Every day is a little journey contributing to the larger journey and nobody knows what tomorrow is going to bring to your life. I am massively thrilled that we are having a baby-boy this July and the 1M has just been signed up in our house as the official “Baby Vehicle”.

This will be the newest badge of honor on the 1M’s curriculum vitae. At least my boy will be able to tell his friends when he is older that “my dad used to drop me off at daycare in a 1M”. I told my wife when I was buying the 1M that this was the car I wanted to pick my firstborn child with at the hospital and that’s exactly what is going to happen.

The memories you make with a car are more important than the car. 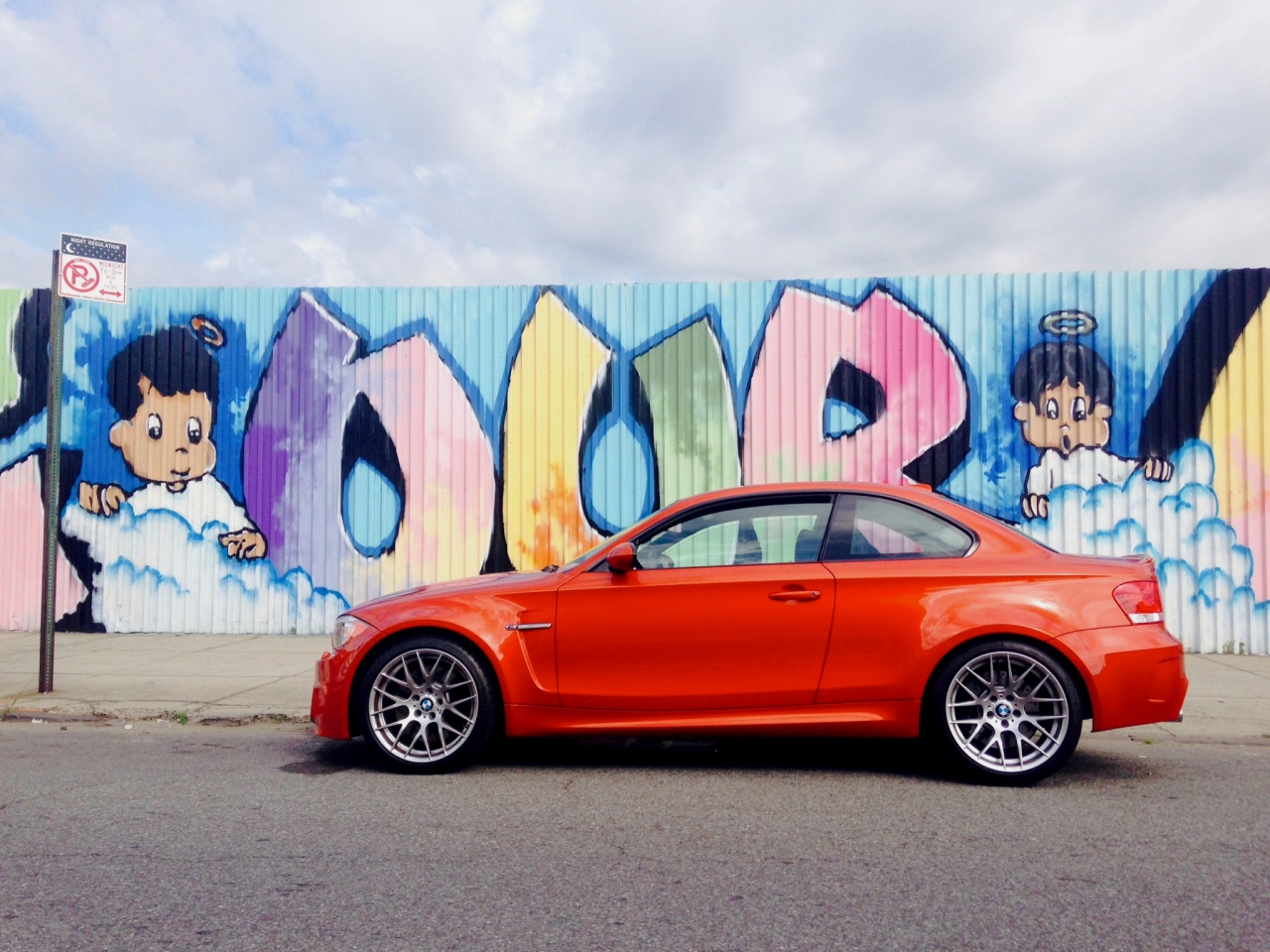