This week, we share content originally posted via Stanceworks, but it is an intriguing story revealing some of BMW’s history at the point where the company was attempting to avoid bankruptcy. Their passion for motorsports pushed them forward with the unveiling of the BMW 700. Racing success was found with the rare and unique 700RS. For history about this, see the D4C post from last year.

For an introduction, learn more about the man only known as “The Collector”:

It was nearly two years ago that sheer chance lead me to a secluded shop in Southern California. Behind unsuspecting doors sat an assortment of classic BMWs, unparalleled by any collection I had seen before. Dozens of cars, ranging from classic touring sedans to vintage race coupes, sat fender-to-fender, and any empty space between them was sure to be occupied by an equally impressive parts collection. With a desire to remain anonymous, and thus known only as the Collector, the owner of these machines was and is an emphatic man, jubilant in his excitement and passionate with his words. He was eager to share his accretion of automobiles to those with equally eager ears and eyes. He’s the type of person you hope is around to preserve a marque and its legacy, such as BMW. His collection has grown steadily ever since, with its power of impression compounding exponentially with each more-and-more stunning addition. The latest of them all, however, is perhaps truly as spectacular as they come. 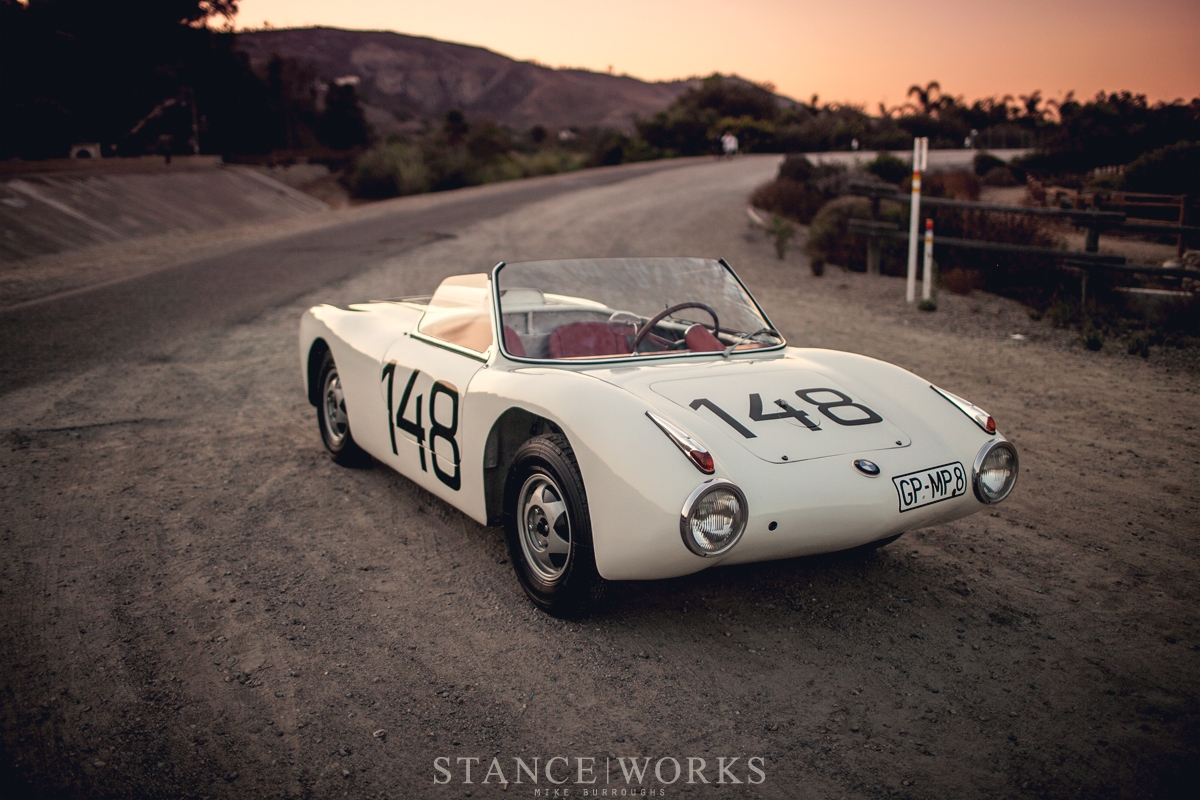 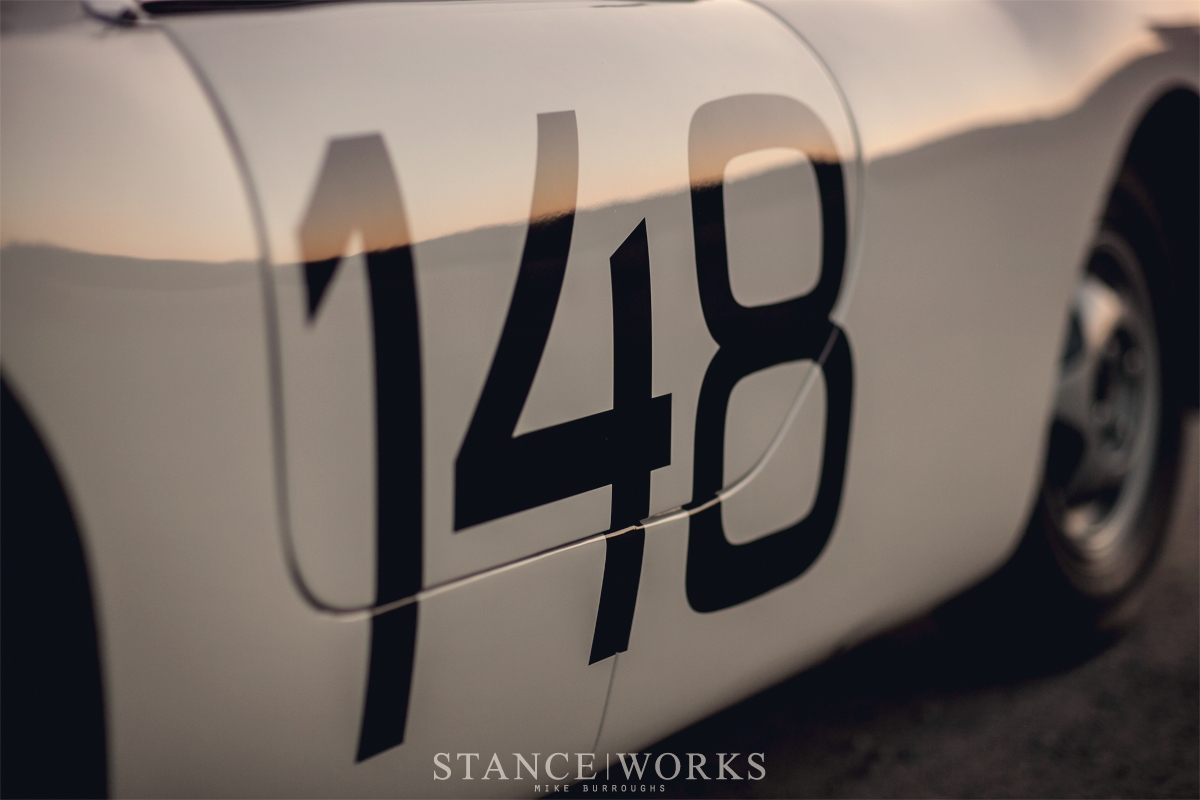 In 1959, BMW introduced the 700, a rear-engined air-cooled economy car. At the time, BMW was close to bankruptcy, struggling to stay afloat. The 700 is often credited with saving the company from financial ruin – it’s monocoque chassis, 700cc flat-two engine, and ultimate simplicity made for a car that was both friendly to the wallet and inspiring to drive – all of which heavily benefited sales figures. The car’s low output – only 30 horsepower, was aided by the car’s featherweight stature. Hardly tipping the scales at a mere 1350 pounds, the 700 was as nimble as it was economic. 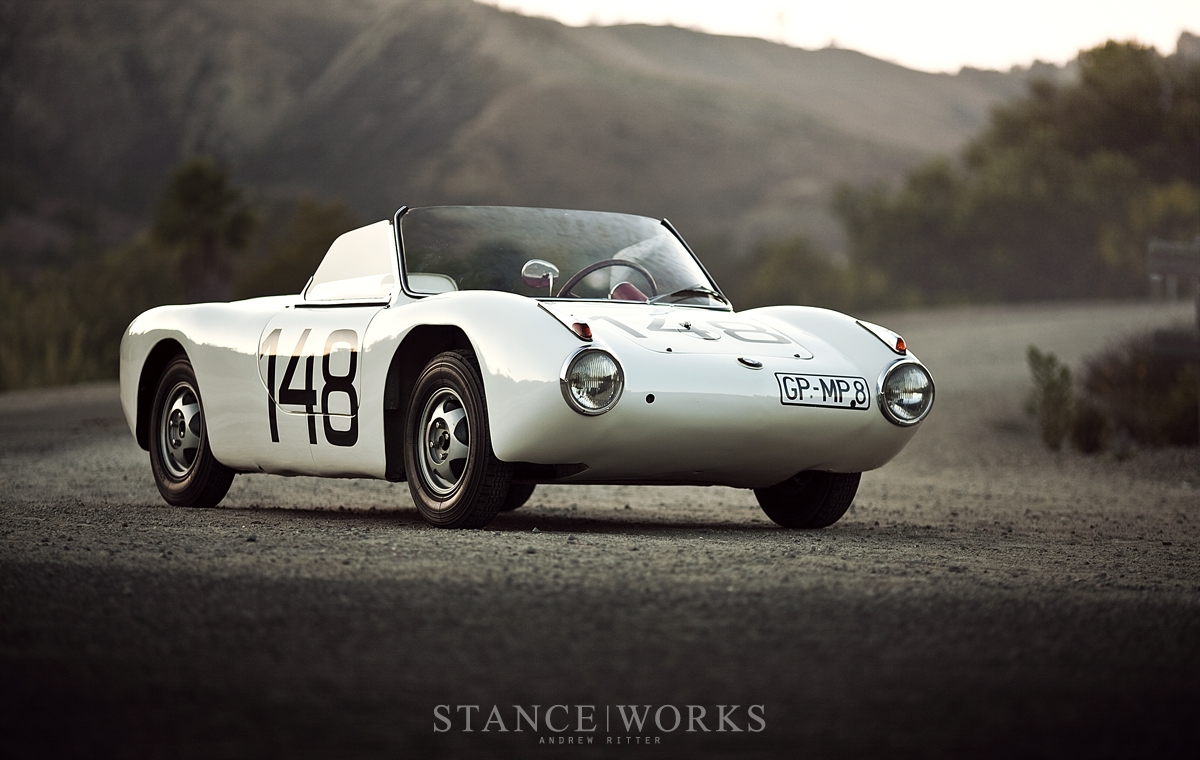 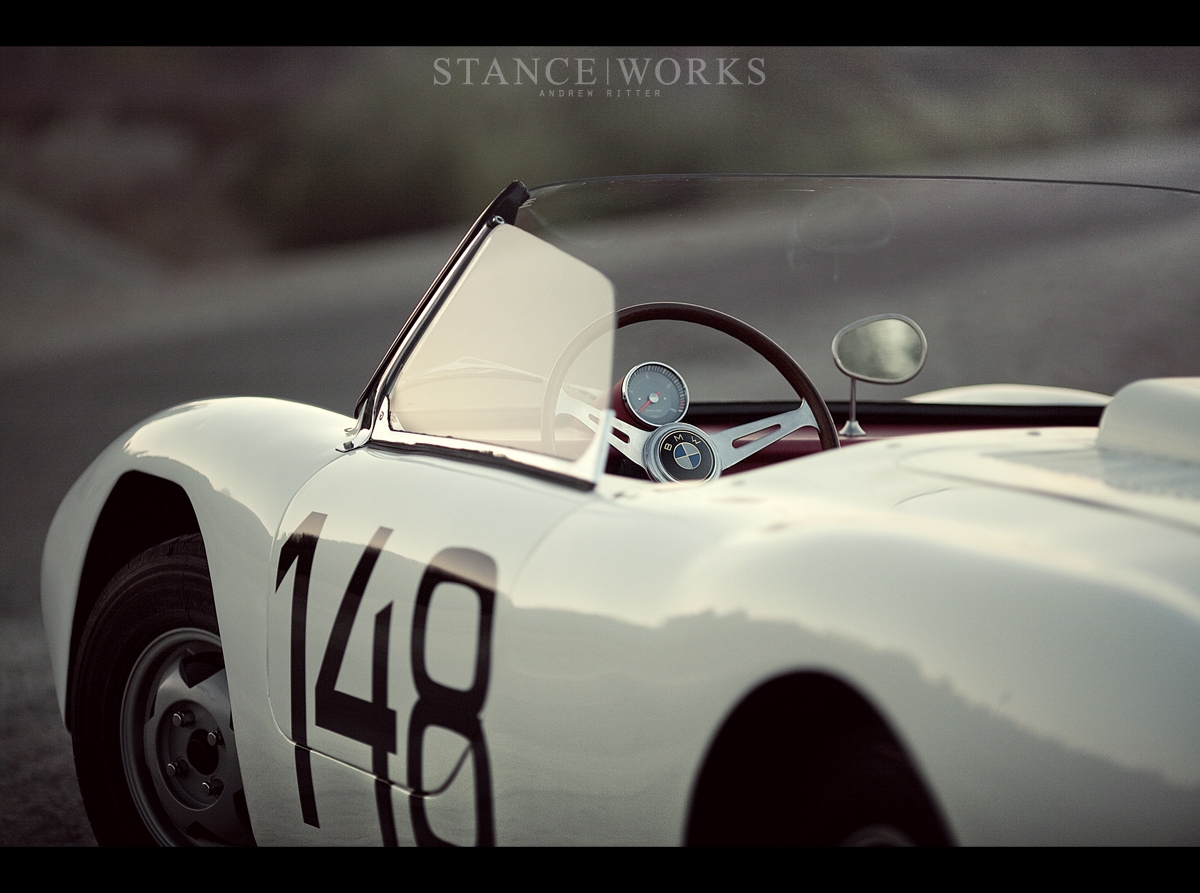 Such light-footedness prompted entry to racing, where the 700 found immense success. Just one year after the car’s introduction to the public market, the 700 had established itself amongst competitors as a driving force in its classes. In 1960, the legendary Hans Stuck piloted the 700 to a victory in the German Hillclimb Championship. Meanwhile, Walter Schneider and Leo Levine took the 700 to a class victory at the Nurburgring 6-hour touring car race, and lastly, Stuck and Sepp Grieger drove the car to a class win at the 1960 Hockenheim 12-Hour. In 1961, Walter Schneider continued, pushing the 700 to an overall win for the 1961 German Saloon Car Title. 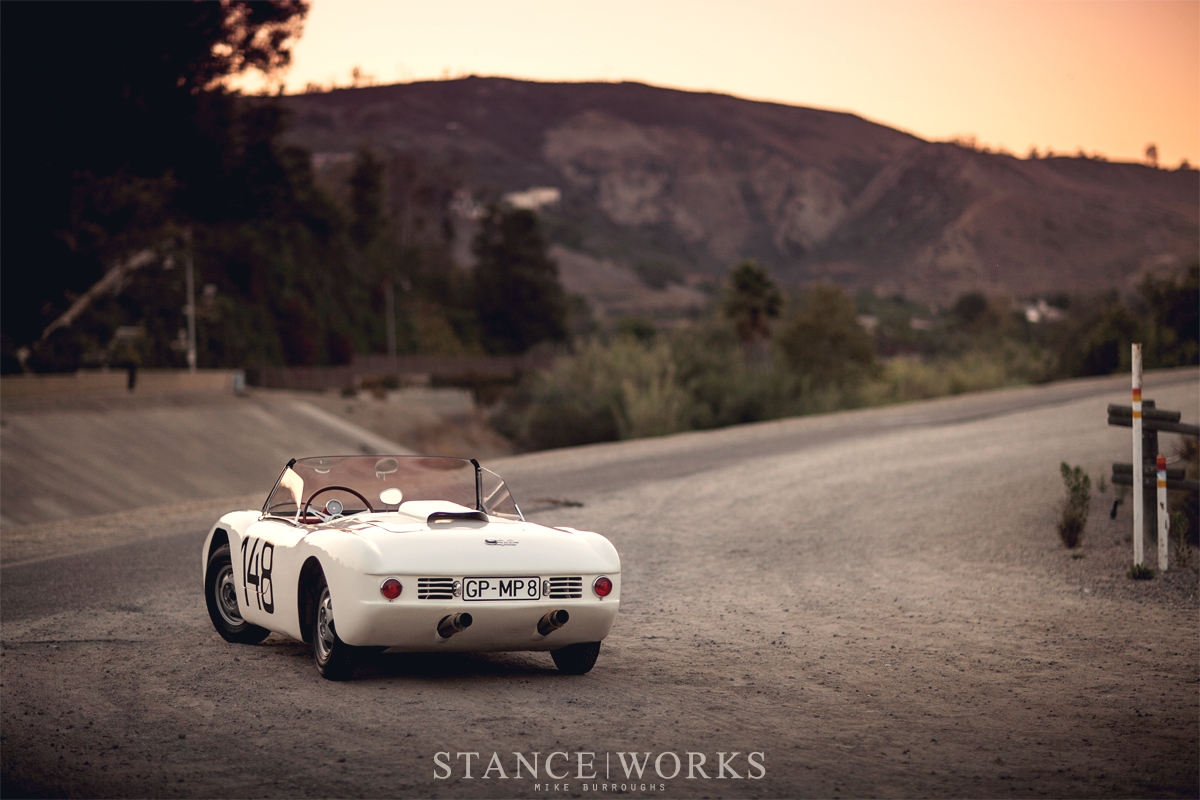 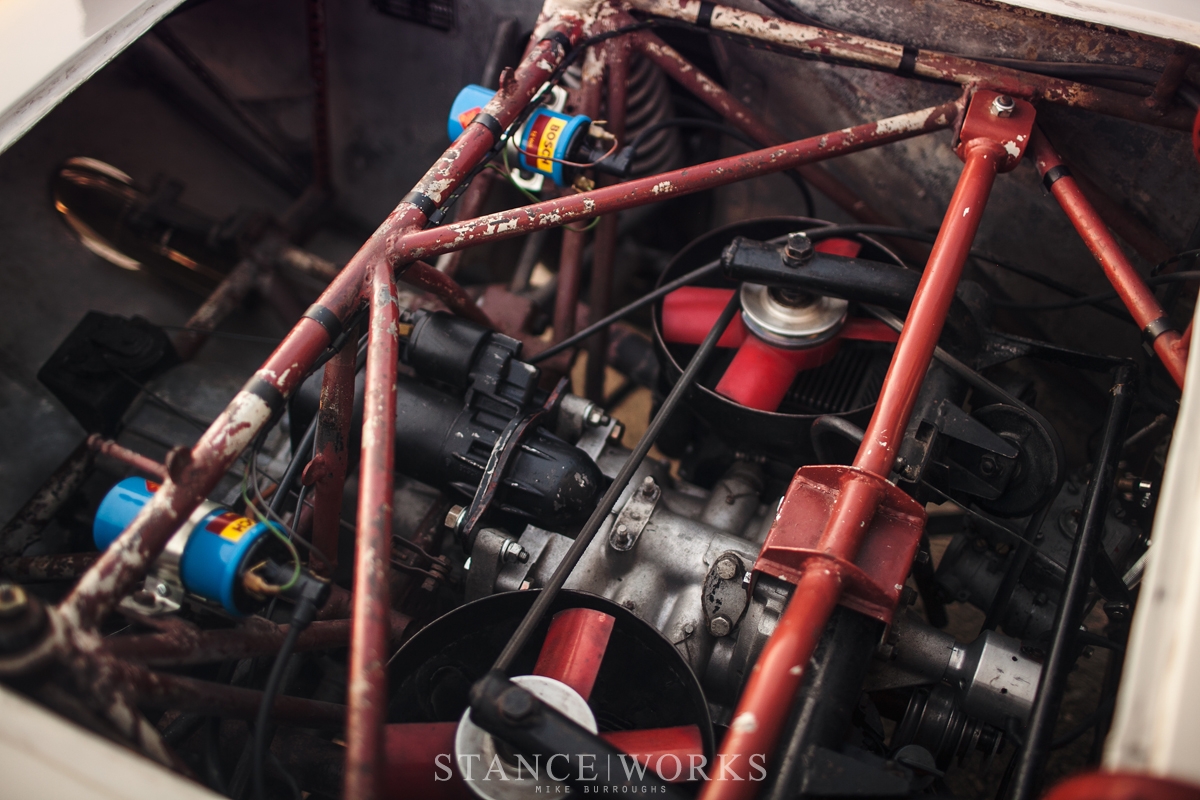 The immediate success of the 700 prompted the development of a purpose-built race car. Some of BMW’s most well-known engineers, such as Alex Von Faulkenhausen, Ludwig Apfelbeck, and Willi Martini, assembled in a “skunkworks” fashion, and by June 1960, they had completed the 700RSs. The 700RS shares little resemblance to its production-based counterpart; in fact, very little of the original car remains. The 700RS is, in ways, more reminiscent of Porsche’s 550 spyder: a rear-engined featherweight roadster. 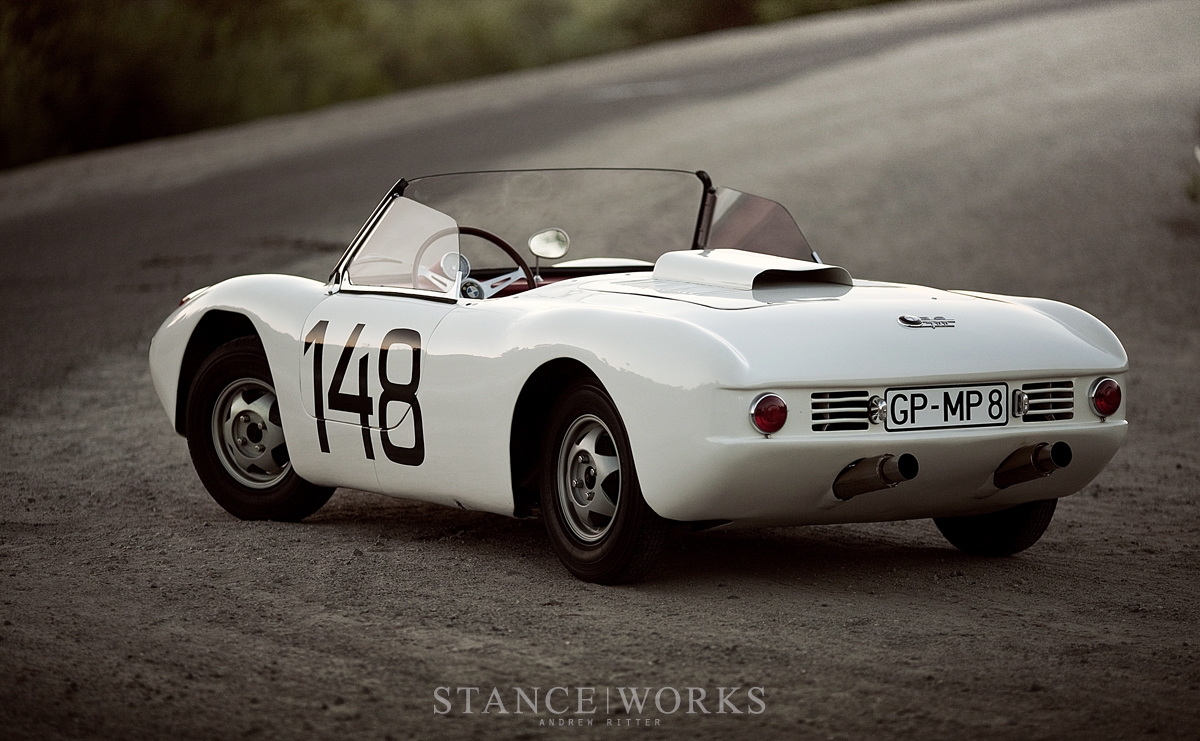 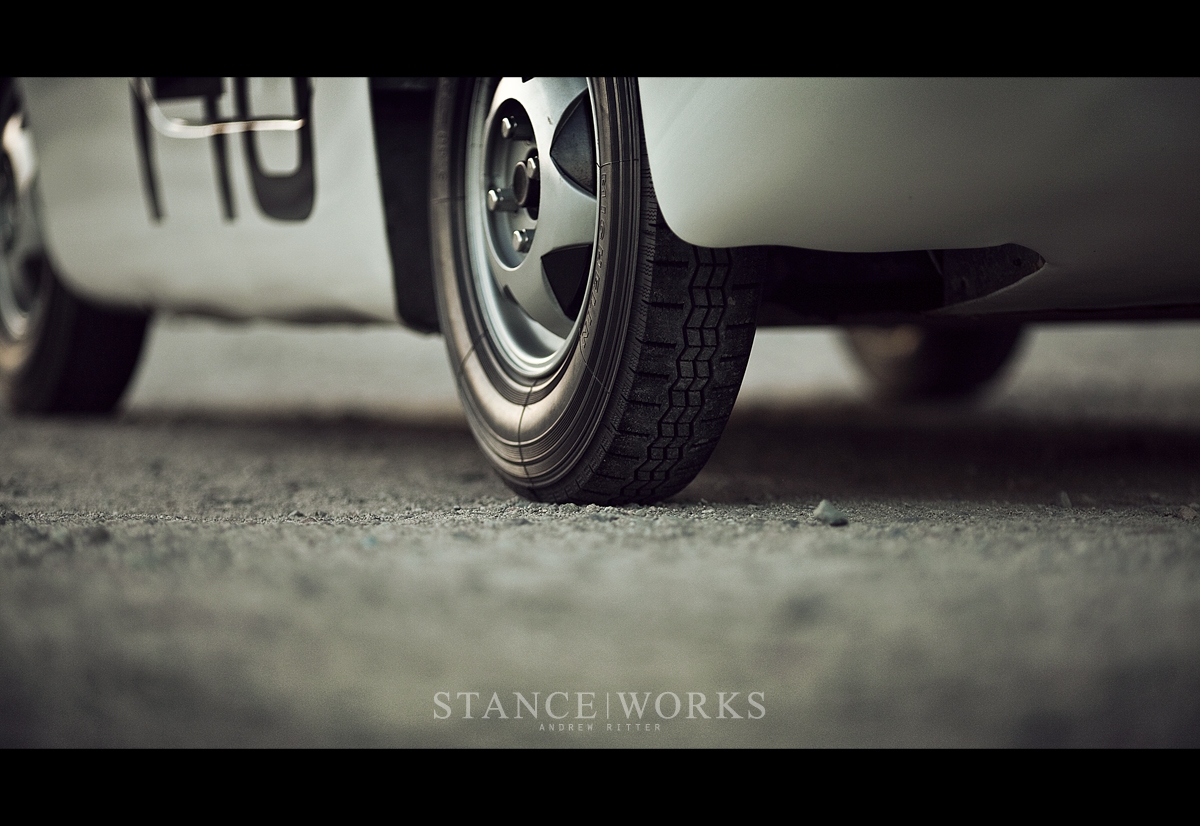 The RS’s exterior takes a radical departure from the 700 coupes and sedans; a hand-built aluminum body borrows its front end aesthetic and turn signals from the 507. The front windscreen is made from the production car’s rear glass, and many of the trim pieces and accessories are pulled from BMW’s parts bin. The paneling is unique to the car, sharing a style with no BMW before it or since. The rear end is long but low slung, housing the two-cylinder engine with room to spare, and sporting a widened track width for improved handling. The interior of the car is minimalistic as imaginable: the dashboard consists of an engine rev counter and nothing more. A tight grip on the Nardi steering wheel offers the car’s only form of safety restraint, and the original shift assembly pokes through the aluminum sheet floor pan, sprinkled and dusted with signs of wear and tear. 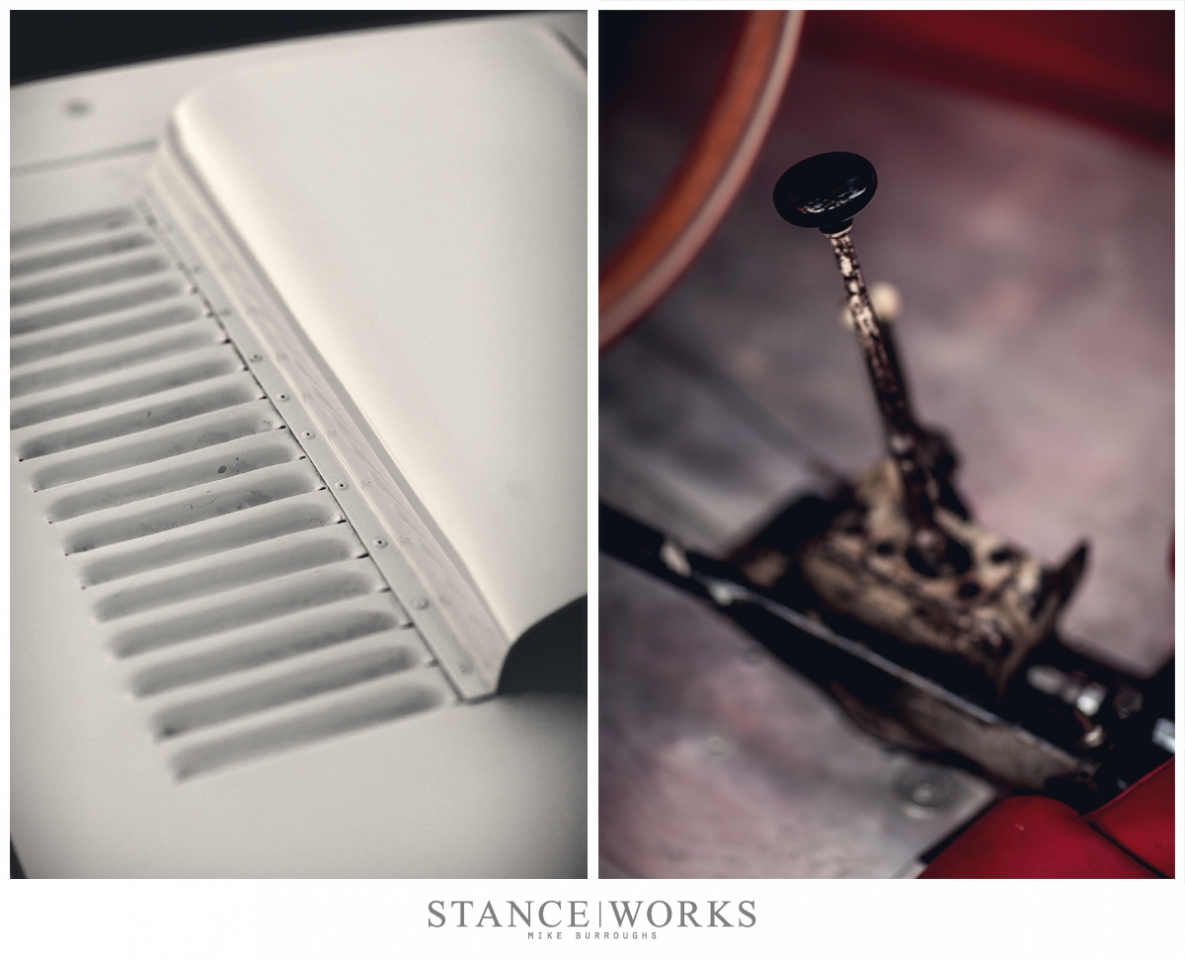 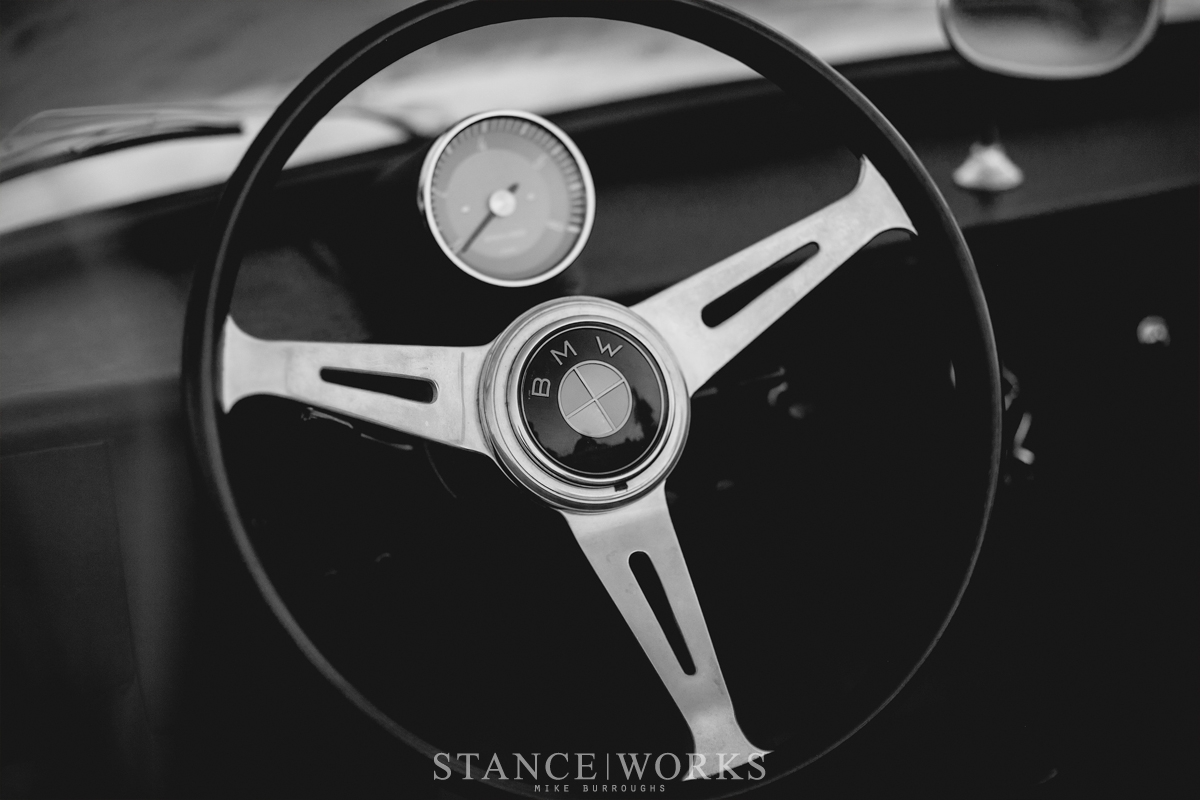 As mother says, beauty is more than skin deep, and the same holds true for the 700RS – below the aluminum skin of the lies a mild steel tube frame chassis. Despite its complex configuration, those lucky enough to drive the car mention its subtle flexibility. Throughout the car are tubes that don’t offer structural support, all of which have been drilled with holes to decrease weight. In an aluminum-bodied tube-frame car, every pound matters, and the efforts in saving weight paid off. The final tally of the 700RS dips well under 1,000 pounds. With the 40-liter fuel tank topped off, and all fluids fresh, the final weight of the RS lands at only 830 pounds. 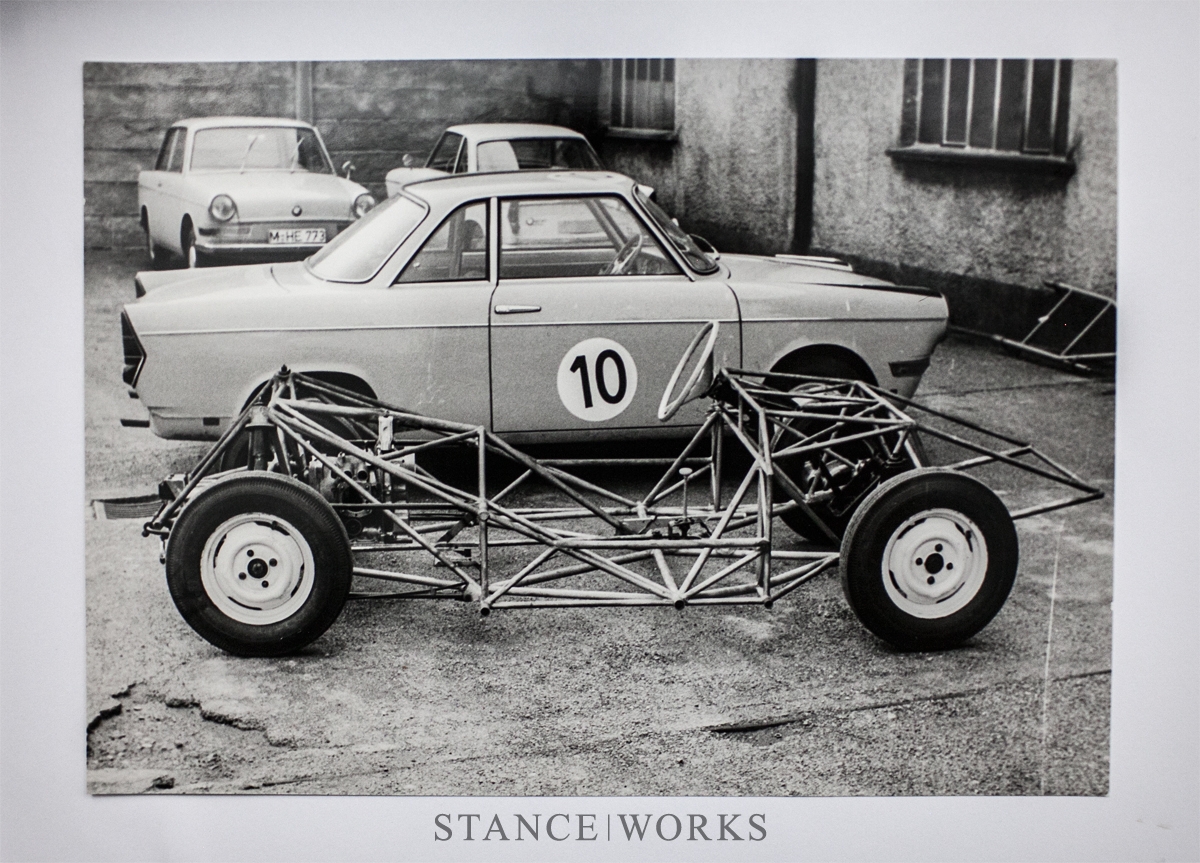 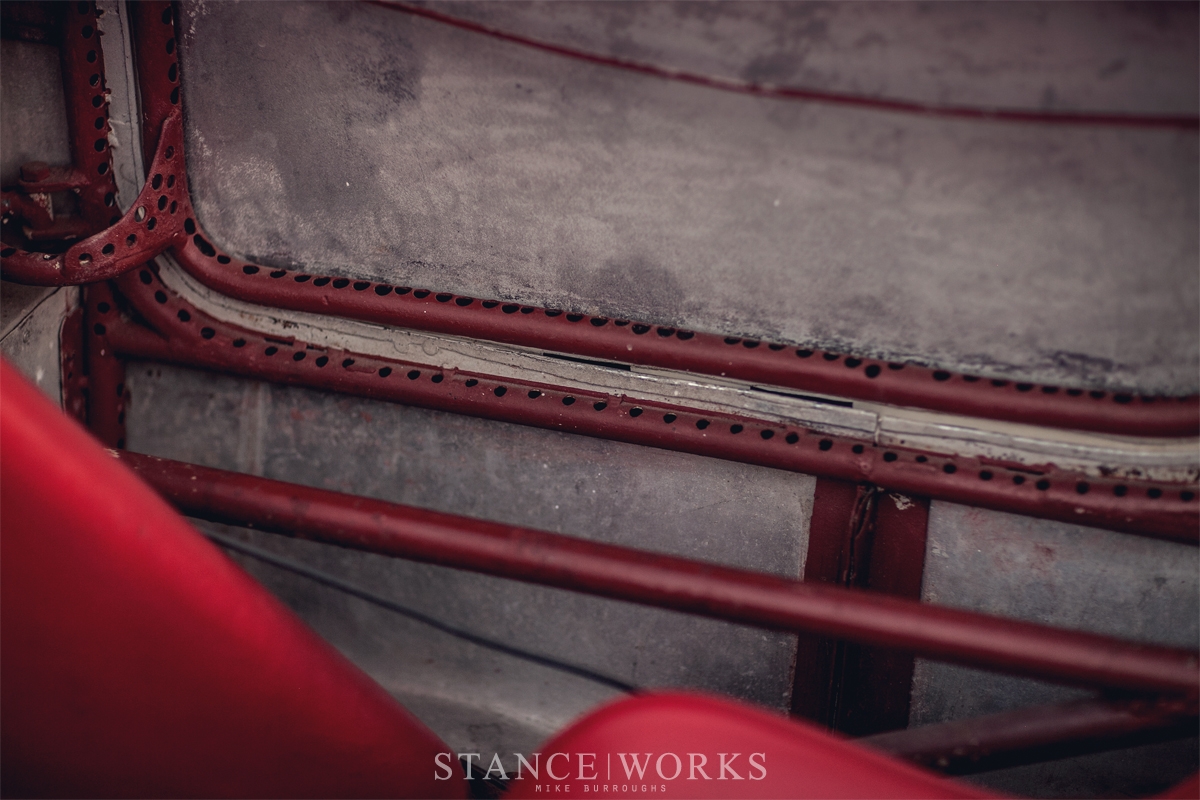 Even the drivetrain of the RS was extensively reworked. While the running gear was mostly original, sans the Italian Amadoria magnesium cast wheels, every other component has received the complete works treatment. The RS’s original engine, still a 700cc two-cylinder boxer known as the “Kettenhund” or “Chain Dog” was fitted with Dellorto carburetors and chain-driven overhead cams, which ultimately proved unreliable. The original engine was removed, and in its place, BMW fitted the Model 106. This engine was fitted with a pair of 40mm Weber carbs, roller bearing lifters, and pushrod actuated valves. For ignition, the 106 sports a dual-point distributor, four coils, and twin-spark heads. The air-cooled engine is topped with a belt-driven fan above each cylinder. The end result is a noteworthy 80 horsepower, giving the 700RS a power-to-weight ratio similar to BMW’s later M3s. 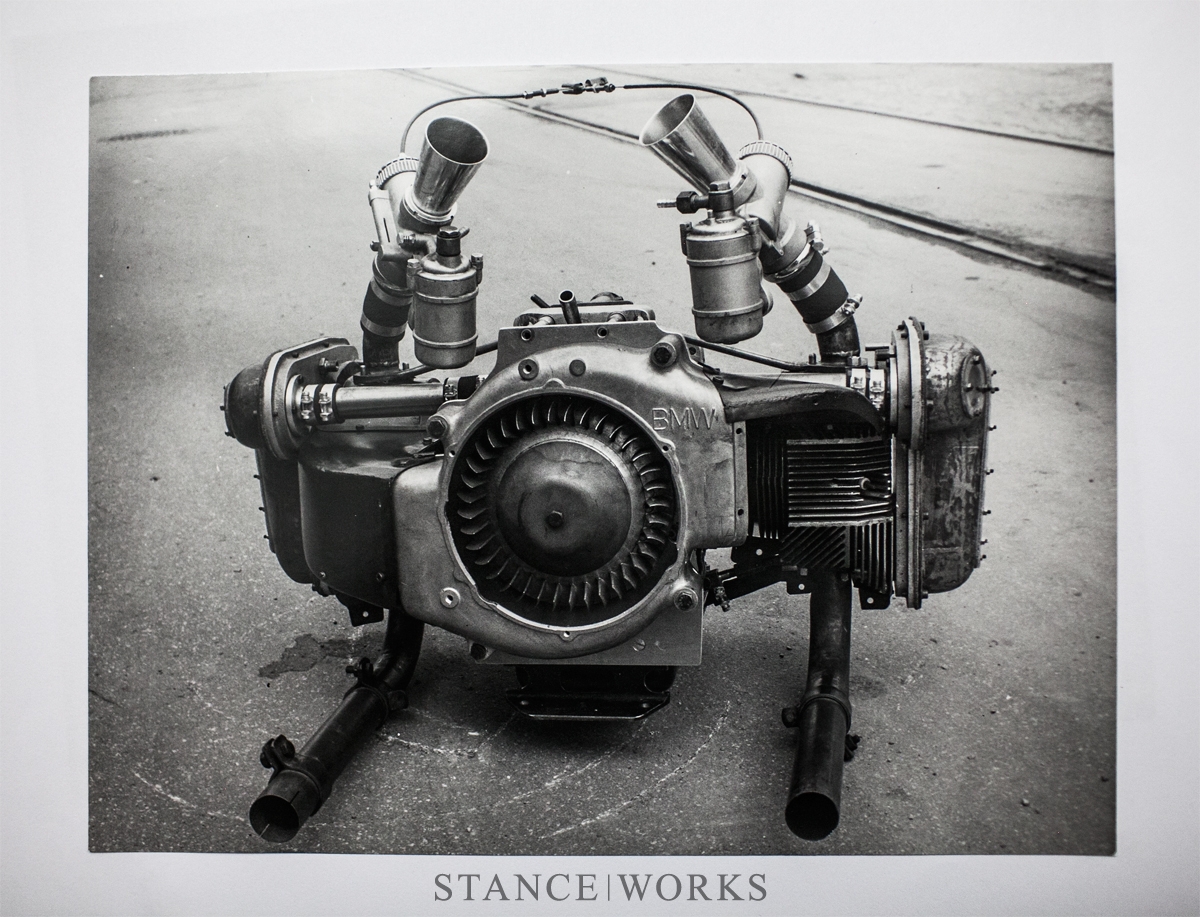 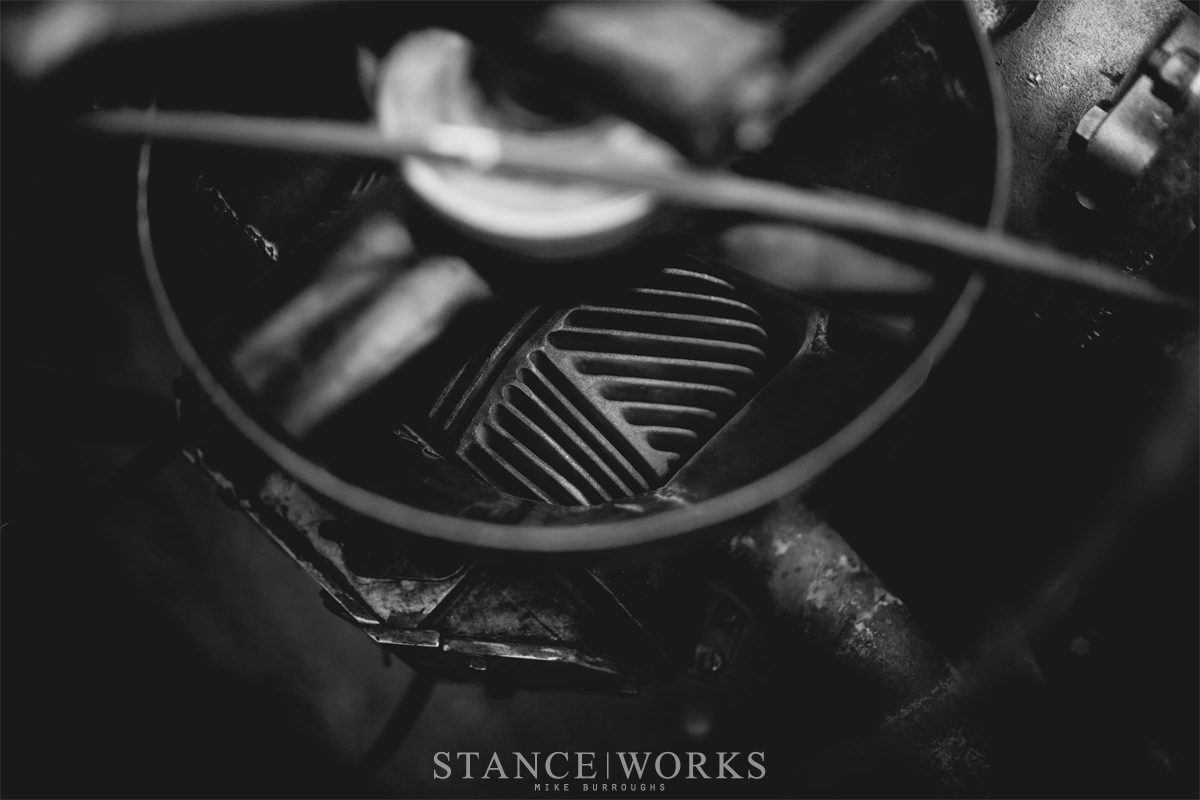 Only two 700RSs were built, chassis #1 and #2. Although 19 cars were originally slated for the project, the launch of the Neue Klasse caused waning interest in the 700, and efforts towards other projects became a primary focus. The two cars 700RSs were raced extensively, both with success. Chassis #2, differentiated by its silver paint and the presence of a roll hoop behind the seats, and Chassis #1 were campaigned together until 1963, when Willi Martnini retired the duo. Since, the two cars live rather separate lives – Chassis #2 is owned by BMW, while Chassis #1 has remained, and will remain, in private hands. Last owned by Elliott Butler in Atlanta, Georgia, the purchase of the car by The Collector came with one stipulation, which has been passed on by each owner of the car: “despite their efforts and offers, you must never sell the car to back to BMW – it is to remain with enthusiasts.” 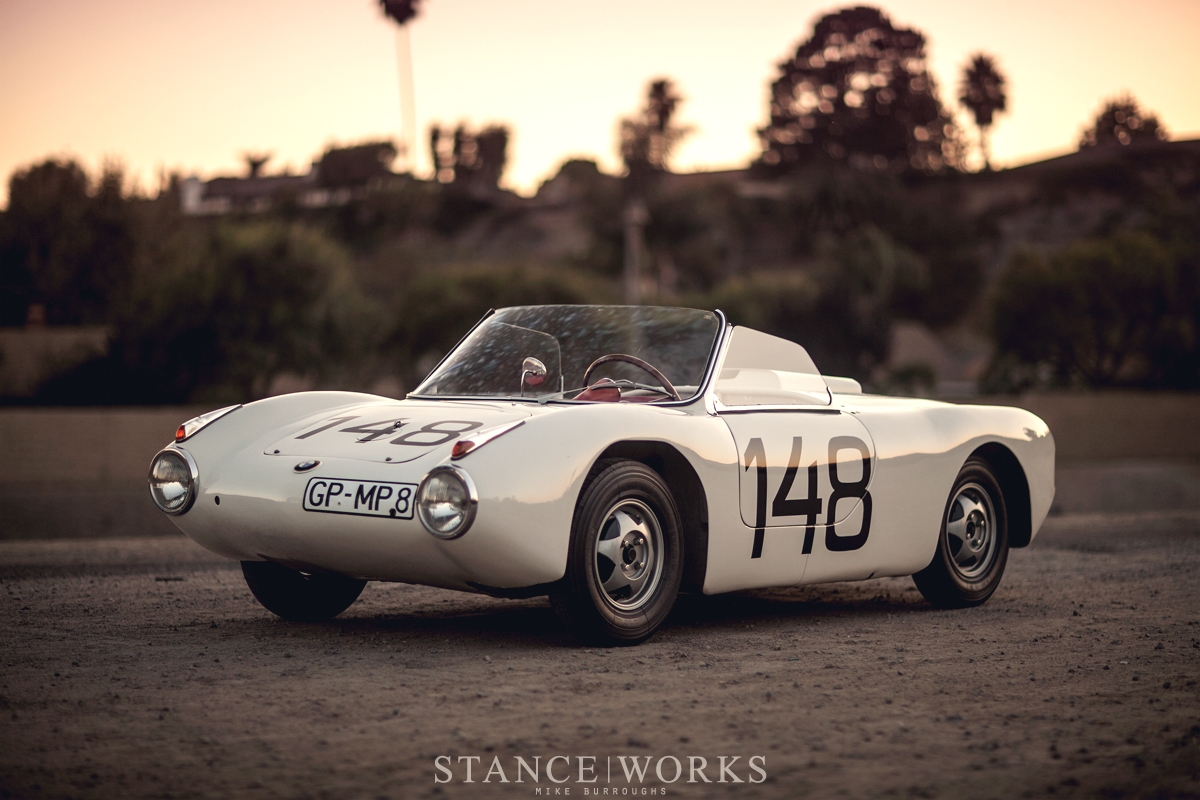 However, it’s not merely the private possession of the car that makes Chassis #1 so special; it’s the legacy. Driven by Hans Stuck, Chassis #1 was campaigned to a title victory for the German, Italian, and Austrian hillclimb championships in 1960 and 1961. This was, in fact, the last time the “Bergkönig,” or “King of the Mountains,” as Stuck was known as, would become champion. Ending his famed and celebrated racing history on a high note, it was in this very car that Stuck hung up the helmet and ended his racing career. 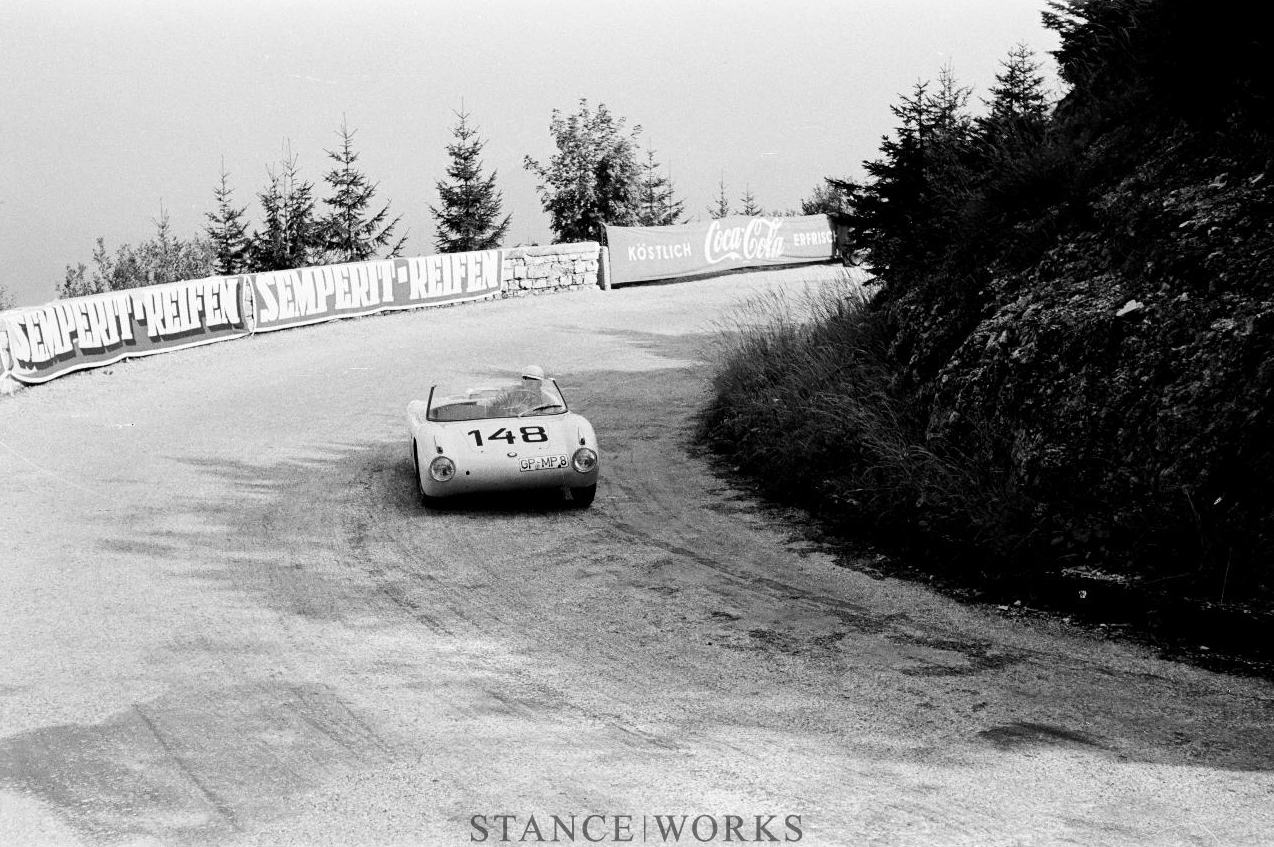 Today, Chassis #1 is in the hands of The Collector, representing the pièce de résistance of his collection. He insists that it will be hard to go up from here, as his 700RS stands as one of the rarest BMWs in existence. While there are certainly one-offs and prototypes that are one-of-a-kind, in many ways, they’re superseded in many ways by a car that is one of two. Chassis #1’s sister car offers an inarguable establishment of validity, and provides an anchor for his history, successes, and heritage. It will never become the topic of rumor, nor the subject of questionable roots – it is a pivotal piece of BMW’s racing history – and now, it rests in the hands of a man with a true love and affinity for the marque. 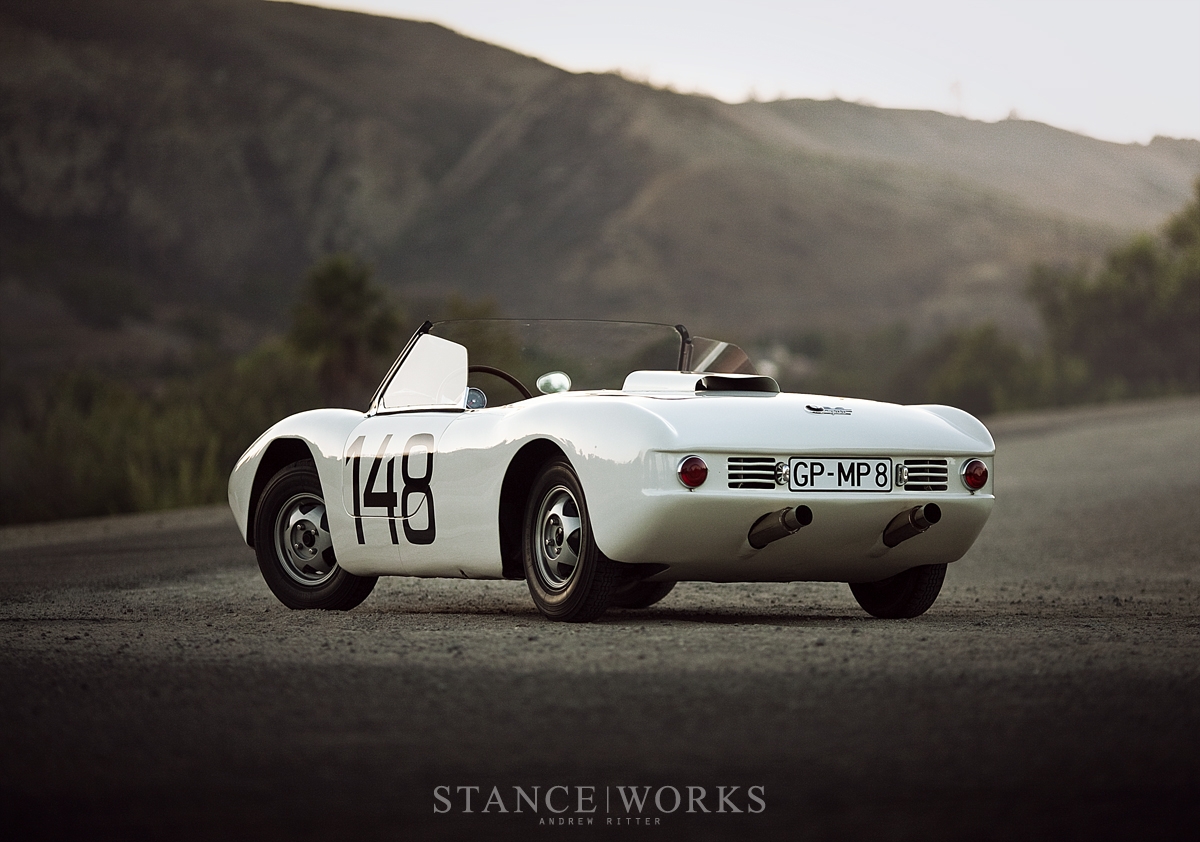