This week, take a look at a unique BMW dubbed the Cafe Racer. Original Article by Retrowriteup on 04/25/2013.

Heritage can be defined as something inherited from the past. It is a mixture of history and uniqueness. When it comes to products with heritage, prospective customers buy the product expecting to own a small piece of this heritage. A motor vehicle’s heritage is normally determined by an outstanding feature which over many, many years has come to define the vehicle. Examples of this heritage would be the rear engined Porsche, the aircooled Harley Davidson V twin and the BMW boxer engine. The problem with heritage is that, by definition, it resists change. When a manufacturer decides to replace or significantly modify the product, these changes are never met with open arms by the heritage loving customers. Even when changes improve the design or performance of the vehicle, heritage will obstinately try to block these improvements. Front engined Porsches handled better than the traditional models, but sold poorly. Watercooled, Porsche design engine powered Harley V Rods have never really taken off. Which brings us to our featured motorcycle; the BMW K100 with it’s in line four cylinder motor. 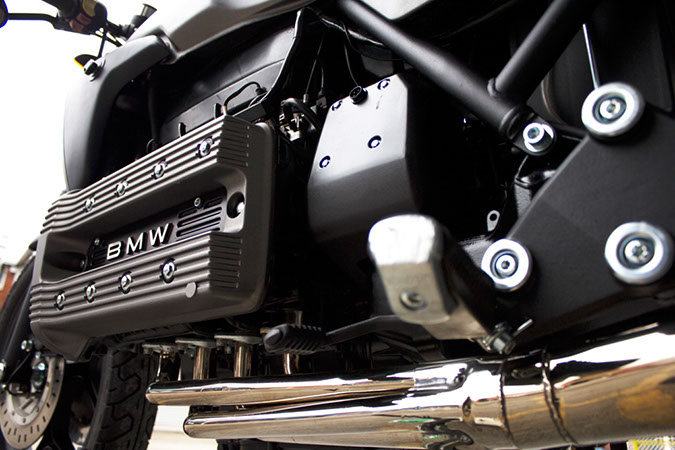 The BMW horizontally opposed twin cylinder “boxer” motor has been around since 1923, the first year BMW built a motorcycle. By the early 1980s the boxer’s performance was way behind the Japanese four cylinder‘s performance. Emission control laws were starting to be enforced which the low tech carburetor fed BMWs were never designed to meet. BMW management felt that the boxer design had eventually, after eighty years of production, reached the end of the road. To try and increase performance and lower emission levels would not be cost effective and a new engine was needed to take the BMW brand into the future. To cut down on development time BMW decided to buy in technology rather than develop a motor from scratch. They bought the engine design from Peugeot and in 1983 the BMW K100 1000cc four cylinder was introduced to the world. 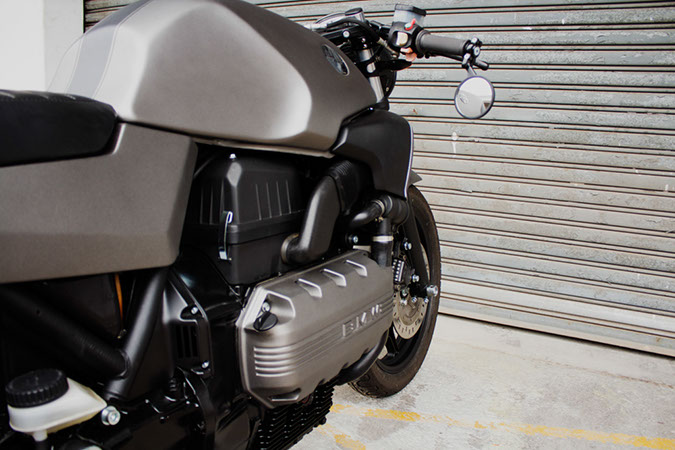 To keep the motorcycle narrow the engine was placed longitudinally in the frame with a car-like clutch and gearbox driving the shaft-drive, which also formed the single sided swing-arm. The motorcycle’s center of gravity was lowered by turning the engine on its side, spark-plugs and manifolds on the left and sump on the right. This unusual looking engine soon became known as “the Brick”. The fast, high tech K series received a lukewarm reception from the boxer engine fans but sales slowly began to grow. The heritage-coated boxers still outsold the new K and if BMW thought the boxer engine was to become history, they were very wrong. Today, 30 years later the Boxer lives on comfortably next to the new generation of K engine bikes and the other newer configuration BMW singles, twins and four cylinder powered machines. 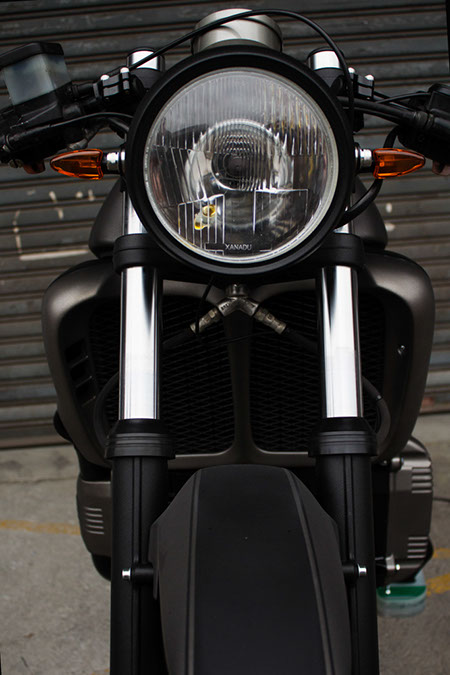 If you look at a the first series of K100s made from 1983 until 1992, before they were completely redesigned, it takes imagination to see a café racer hiding in its DNA. Yet the imagination of the customiser, like V Custom Cycles who created this purposeful sports machine knows no limits. The first K series café racers were criticised if a round tail or bum-stop was fitted as some felt it did not suit the squareness of the tank. Jaco from V Custom created the tail and seat fitted here to complement and enhance the overall look of the motorcycle. 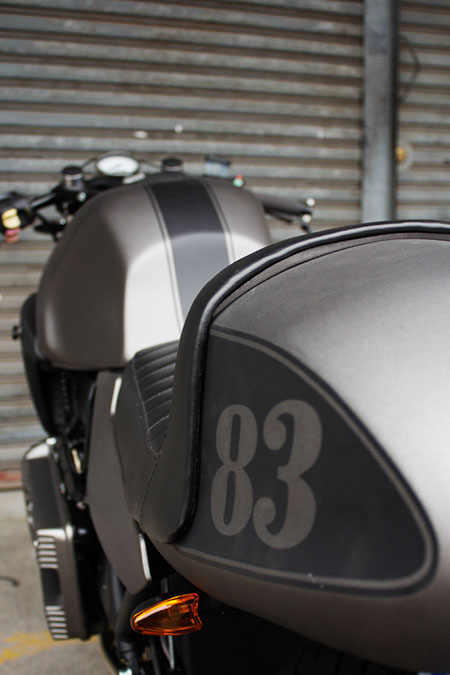 The stance of the K100 is changed by pushing the forks through the triple trees and fitting the clip-on handlebars. Even the tank badges haven’t escaped customization: 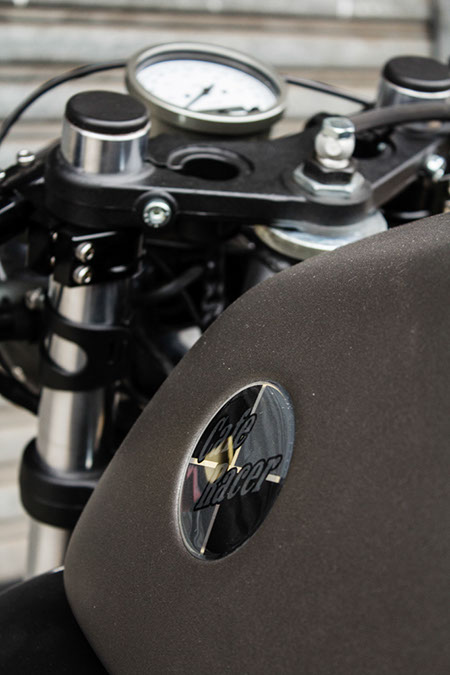 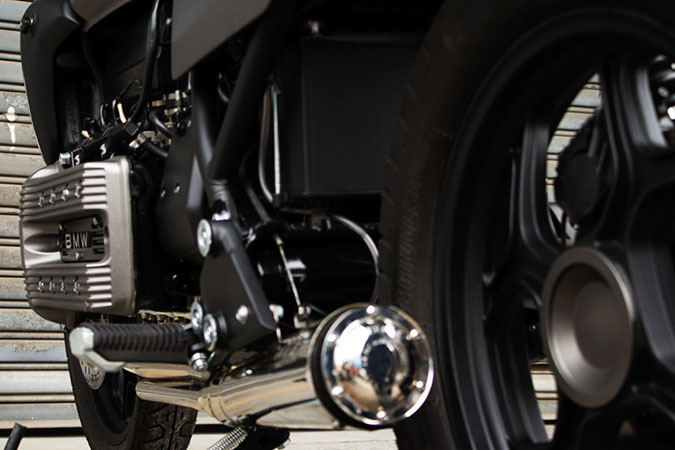 The original 4 into 1 exhaust now has a SuperTrapp canister fitted which is aesthetically and melodically sweeter. 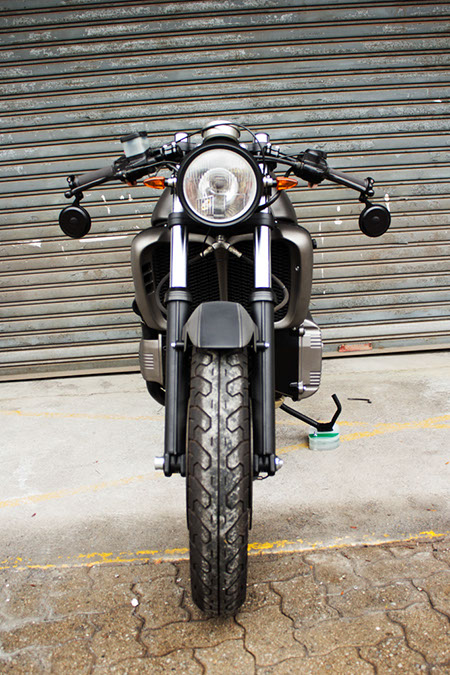 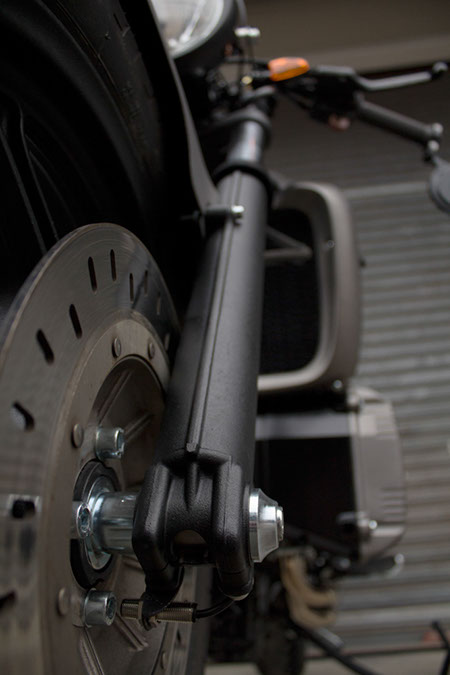 Bar-end mirrors fitted to the clip-on bars accentuate the low look of a motorcycle which is surprisingly tall when you swing a leg over the saddle. 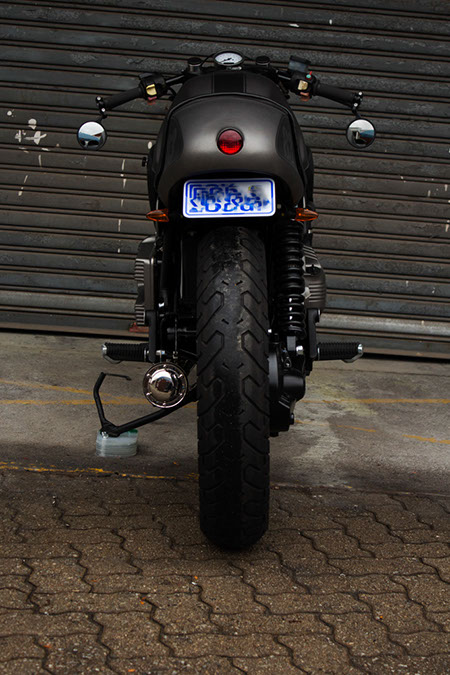 The large speedo cluster with all the idiot lights has been replaced by a simple small speedo, harking back to the 60s which modern café racers try to emulate. The Brembo brakes are standard. 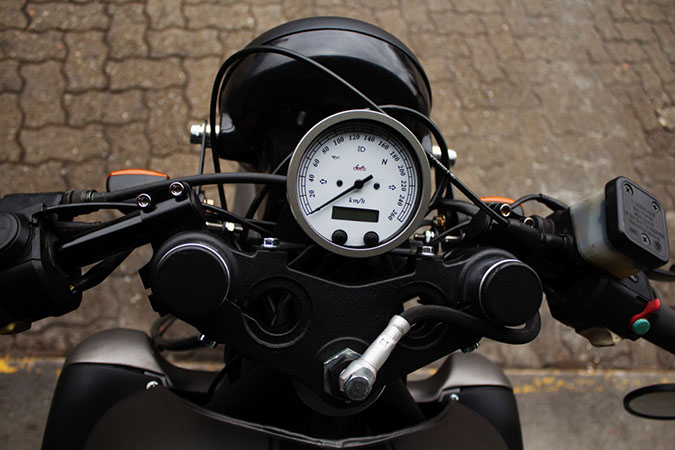 Over the last thirty years the BMW K series has developed its own heritage with its own die hard-fans. Without too much modification or expense the older K series can be freshened up to be part of another great and growing motorcycling heritage – the café racer.