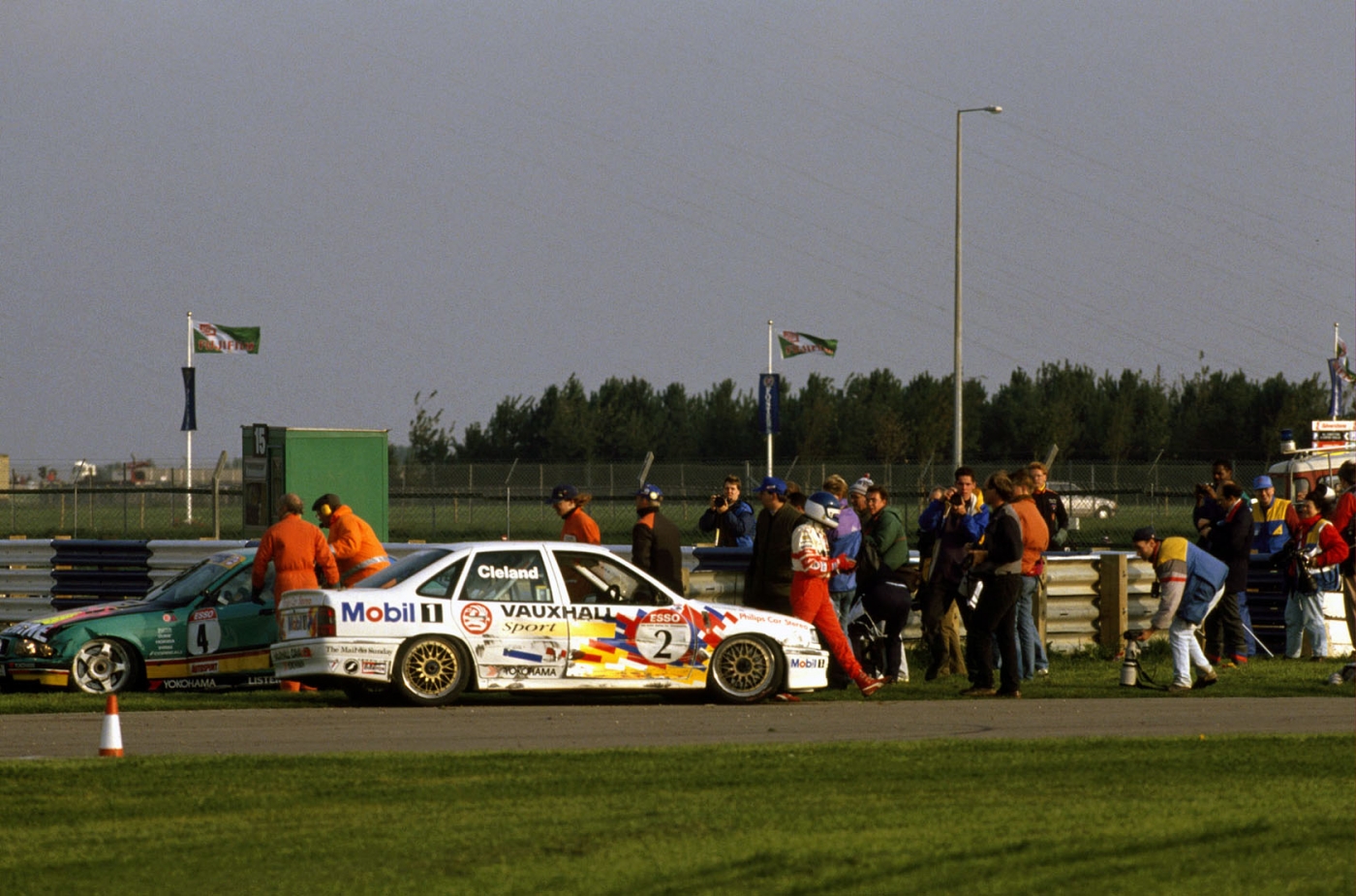 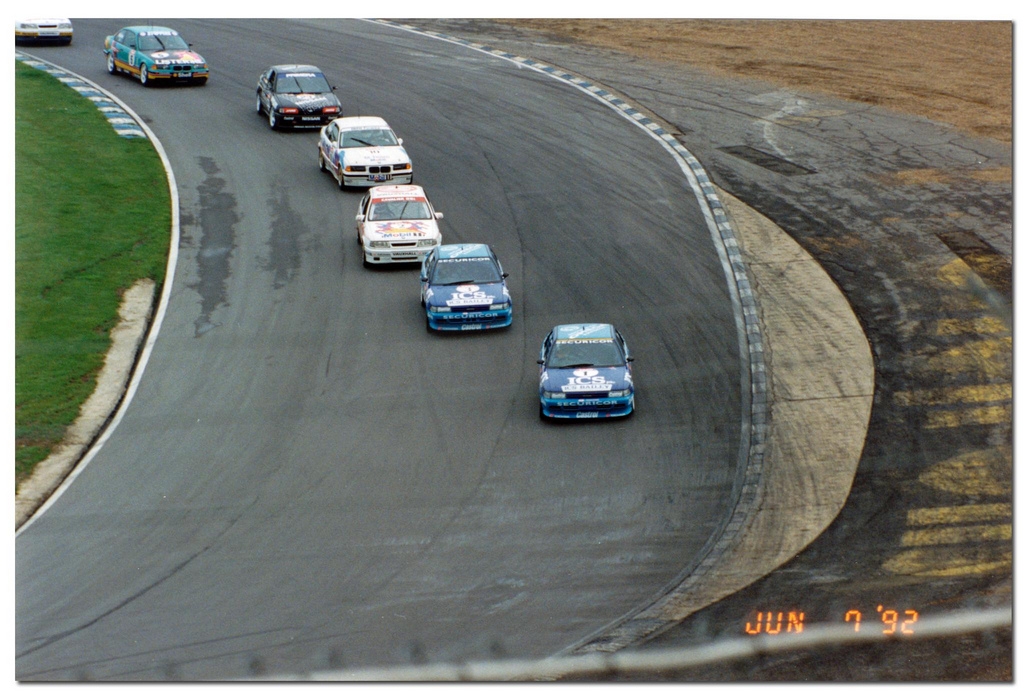 The British Touring Car Championship is arguably one of the most adrenaline-fuelled and exciting series on the modern motorsport calendar. It certainly provides as much bumper-to-bumper theatre and ramming-each-other-off-the-track drama as you’re likely to see outside of banger racing. The mantra of the BTCC for time immemorial has been ‘rubbing is racing’, and if you see Matt Neal giving Liam Griffin a gentle shove in order to cut a cleaner line through Clearways, you can be damn sure that the favour will be returned on the next lap. They jostle, they bump, they smash into their rev limiters like there’s no tomorrow, and any driver who’s seen crossing the finish line with his bumpers intact gets unceremoniously debagged in the pits afterwards. (Possibly.) 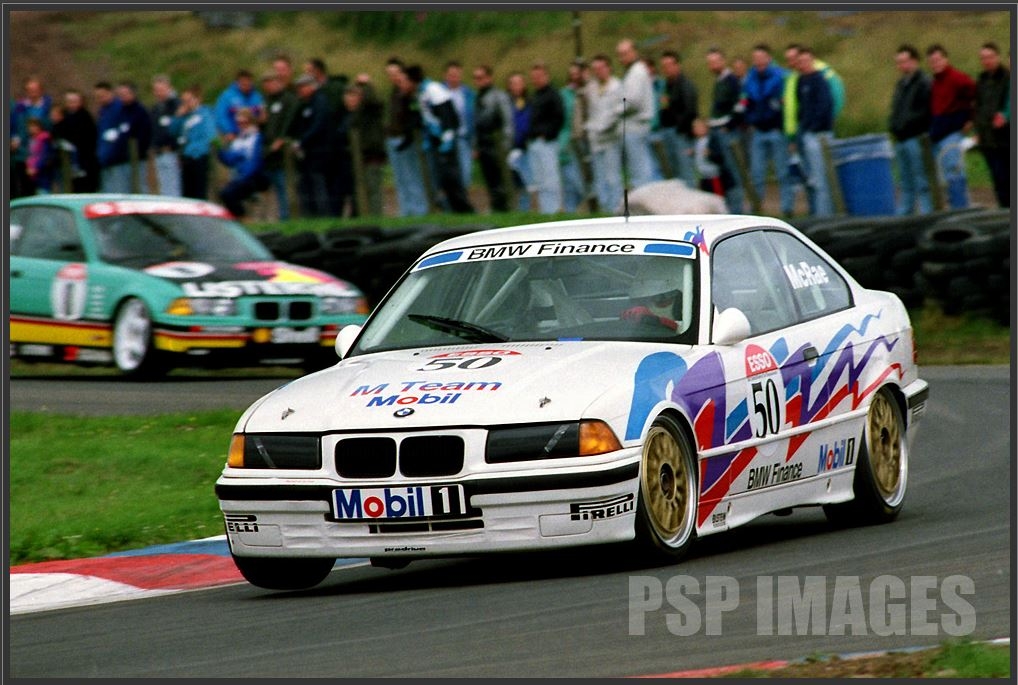 BMW have long been inextricably linked with the hedonistic action, brutal sparring and vaporised slicks of the BTCC, back to the monstrous 635CSi racers that thundered around the UK’s circuits in the early eighties. In the 2012 season there are three 3-series saloons being campaigned by the eBay Motors team, driven by Tom Onslow-Cole, Nick Foster and the nicest man in motorsport, Rob Collard. This offers a brilliant counterpoint to the scampering FWD competitors – Honda Civics, Ford Focuses, MG6s et al – which hop and skip over the kerbs as the brawny RWD Beemers powerslide around them; it’s reminiscent of the classic Minis vs. Falcons duelling of the sixties. 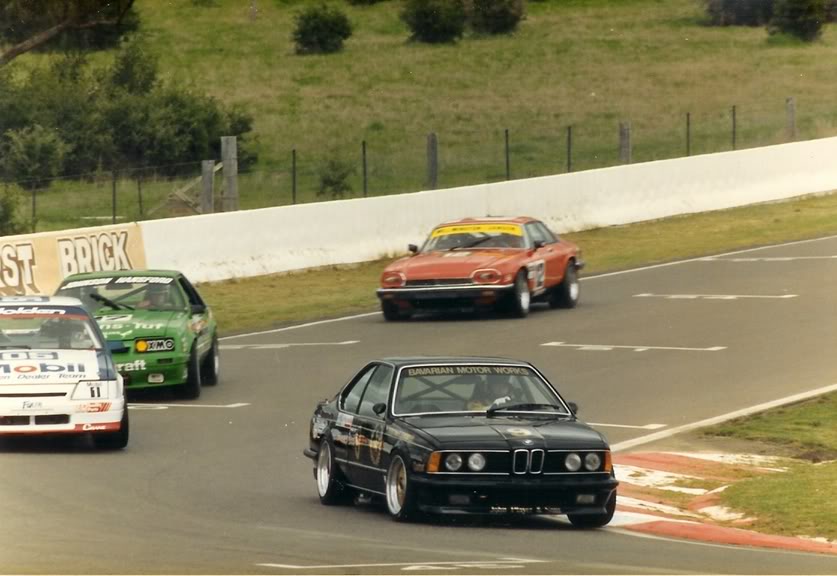 For many, the glory days of the BTCC were the late eighties, when the titles were effectively contested by two key groups; E30 BMW M3s and Ford Sierra Cosworth RS500s. Frank Sytner’s Prodrive M3 did alright in ’87, but it was 1988 when the BMW invasion began in force, with no less than six M3s running in Class B. This was countered by fifteen RS500s in Class A – not direct rivals due to the class system (and massive power gulf between them) but still, amongst the Corollas and Golfs, it was the showboating Cosworths and tenacious M3s that really captured the buzz of the era.

In 1990, everything changed. The introduction of the Supertouring rules heralded a sea change in how the series was run; 1990 was a transitional year in which Supertouring cars were entered alongside Group A cars, which were now detuned for closer racing with new racers such as the Vauxhall Cavalier and the BMW 318is. In 1991 the series shifted to just one class, ensuring parity (to a degree), as well as much lower entry and running costs than the highly-developed, highly-strung Group A racers. 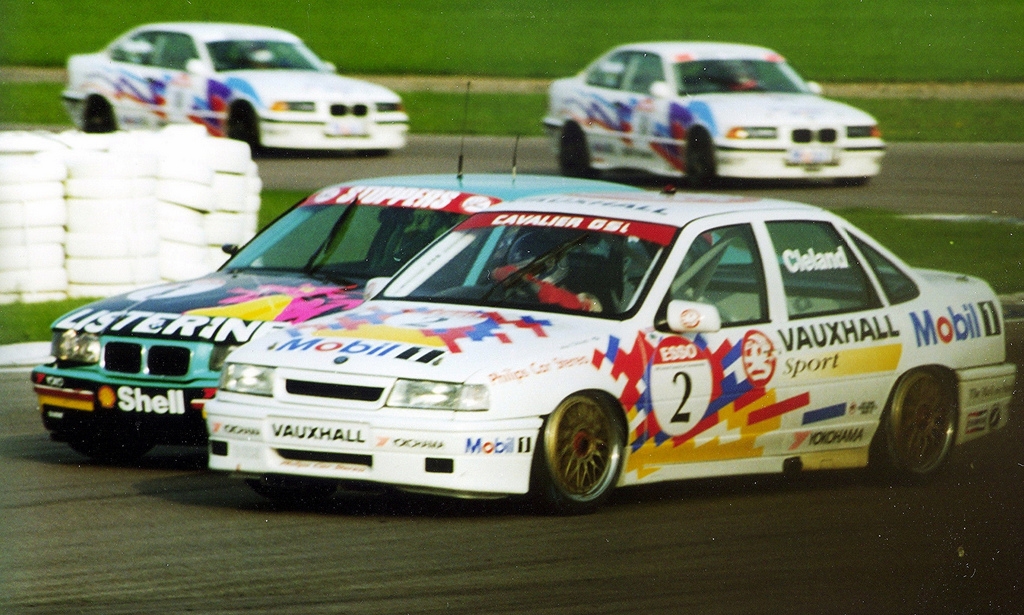 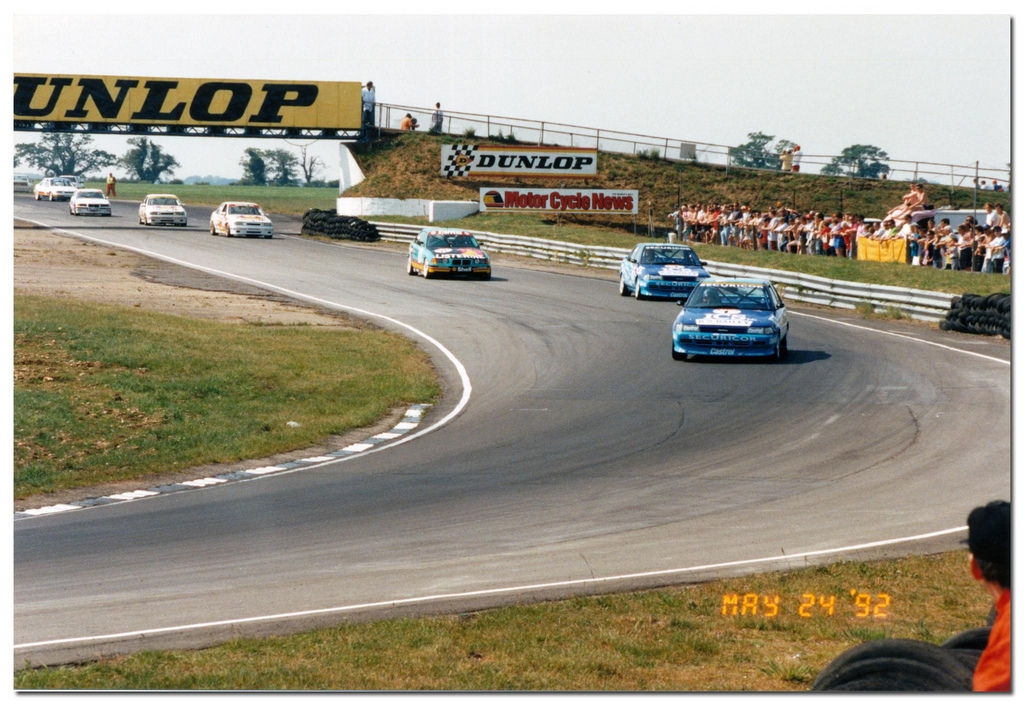 The new car utilized the all new e36 chassis but was classed in the under 2.0 liter category. To achieve this, the S14 from the Italian M3 (S14B20) was dropped in the nose of the new contender; unlike the road going version which came with the M44B18. The engine screamed to 8000 rpm producing an amazing 270 horsepower. Paired to a six speed manual and weighing in at a featherweight 1025 kg, the car was ready to take on the Toyota Carina II’s, Vauxhall Cavalier 16v’s, Mazda 323’s, Nissan Primera GT’s, and Peugot 405’s. Sporting Mint Green Listerine Paint and Shell Livery, the new car stood out like a sore thumb for drivers Steve Soper and Tim Harvey. 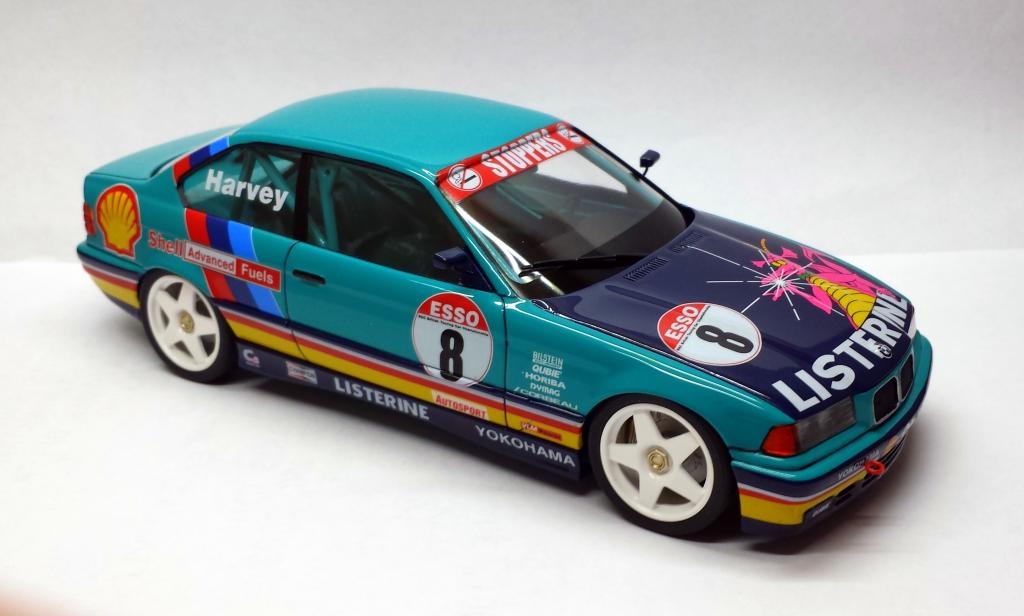 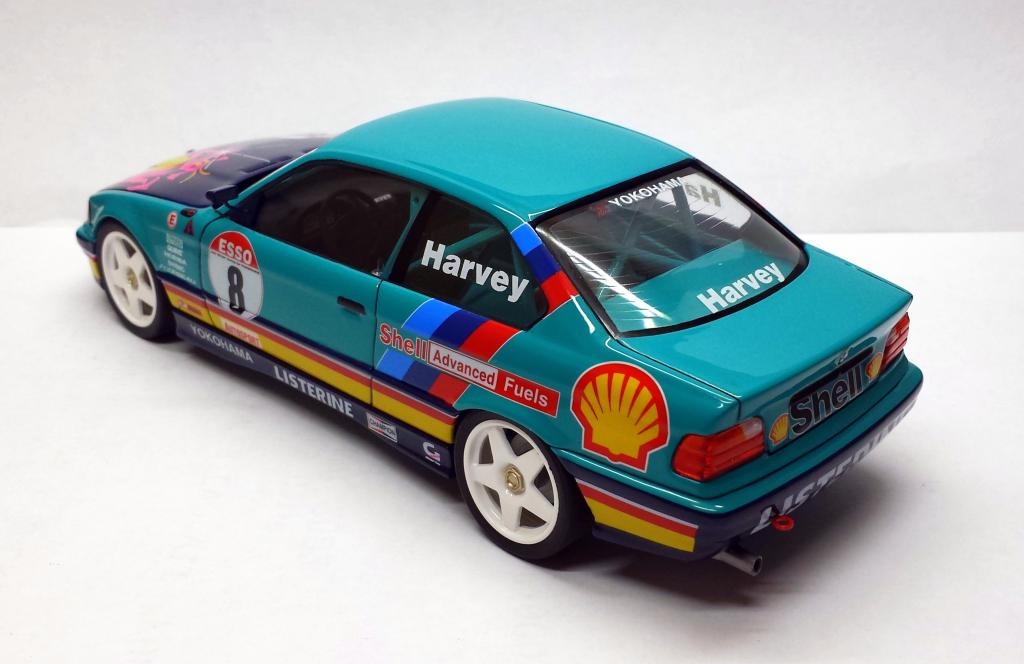 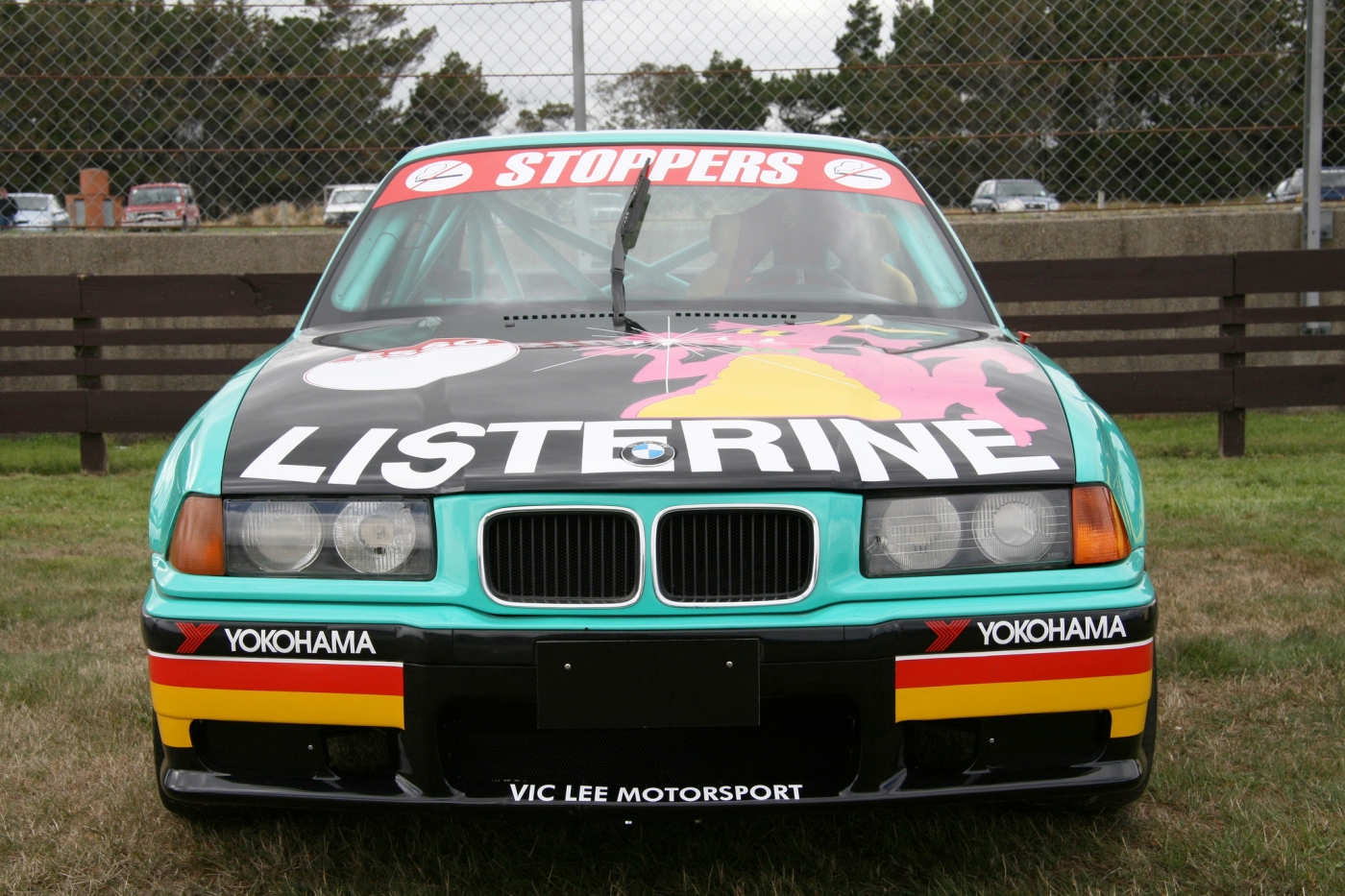 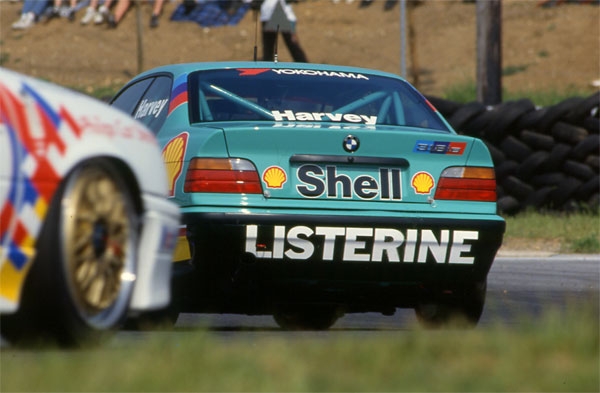 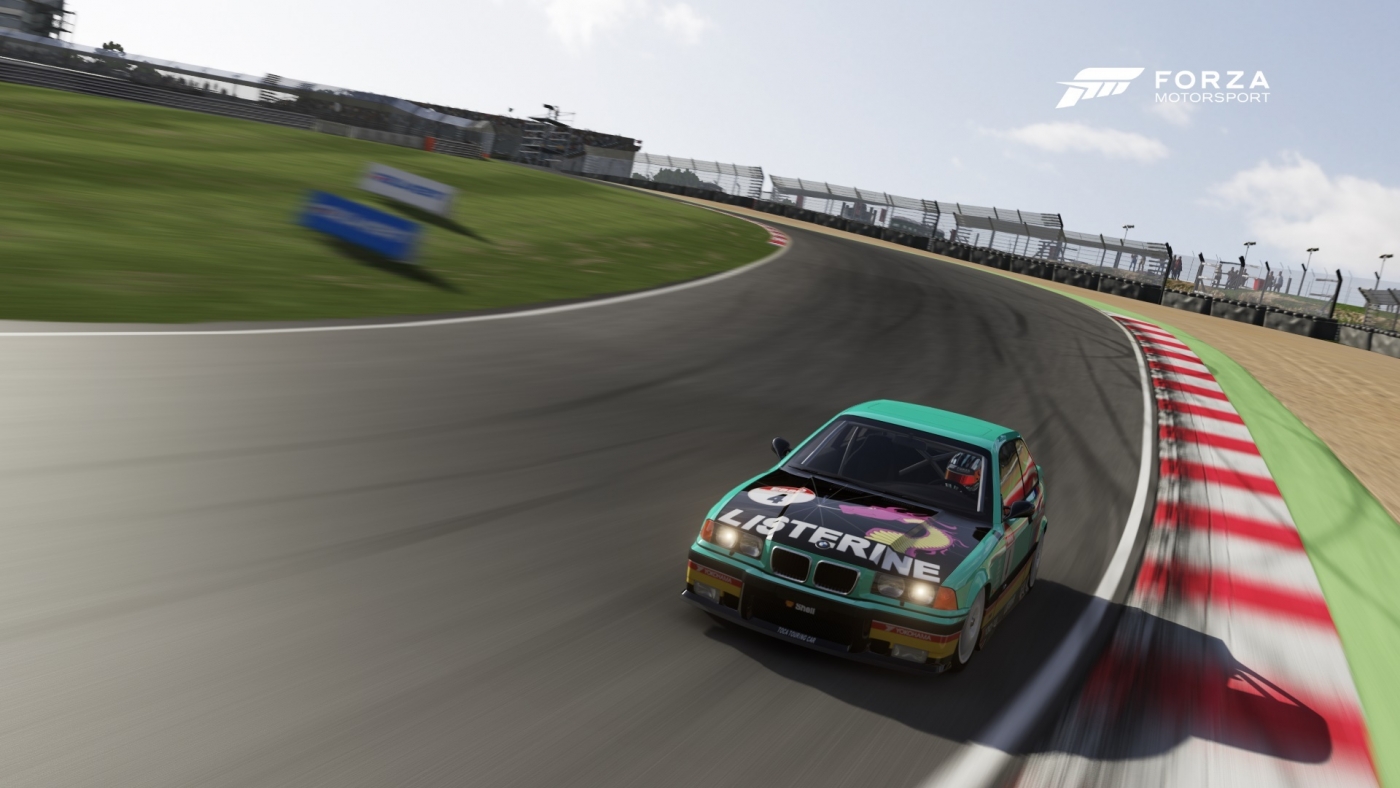 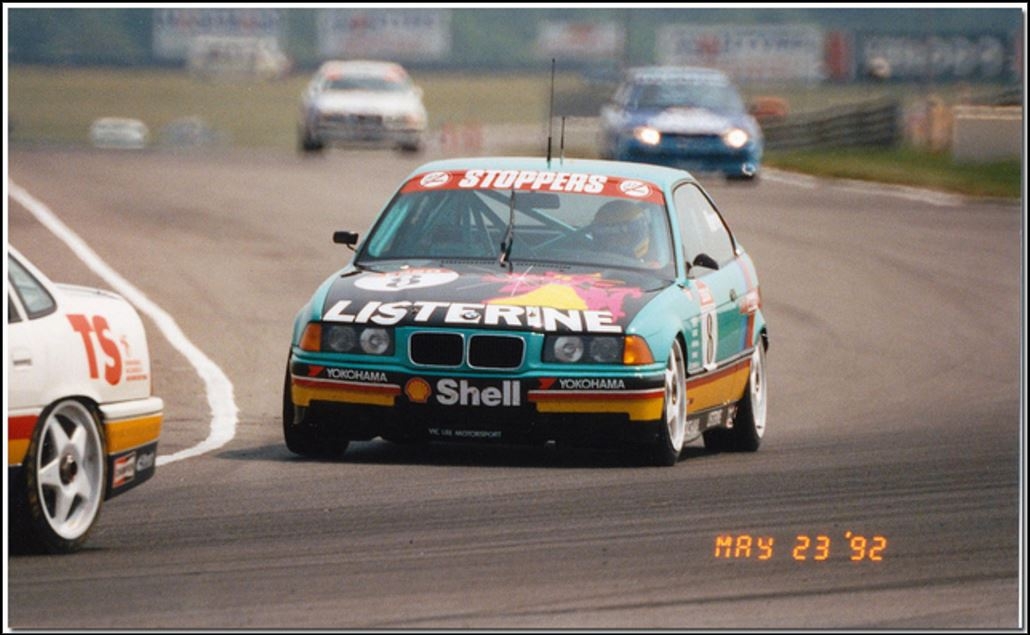 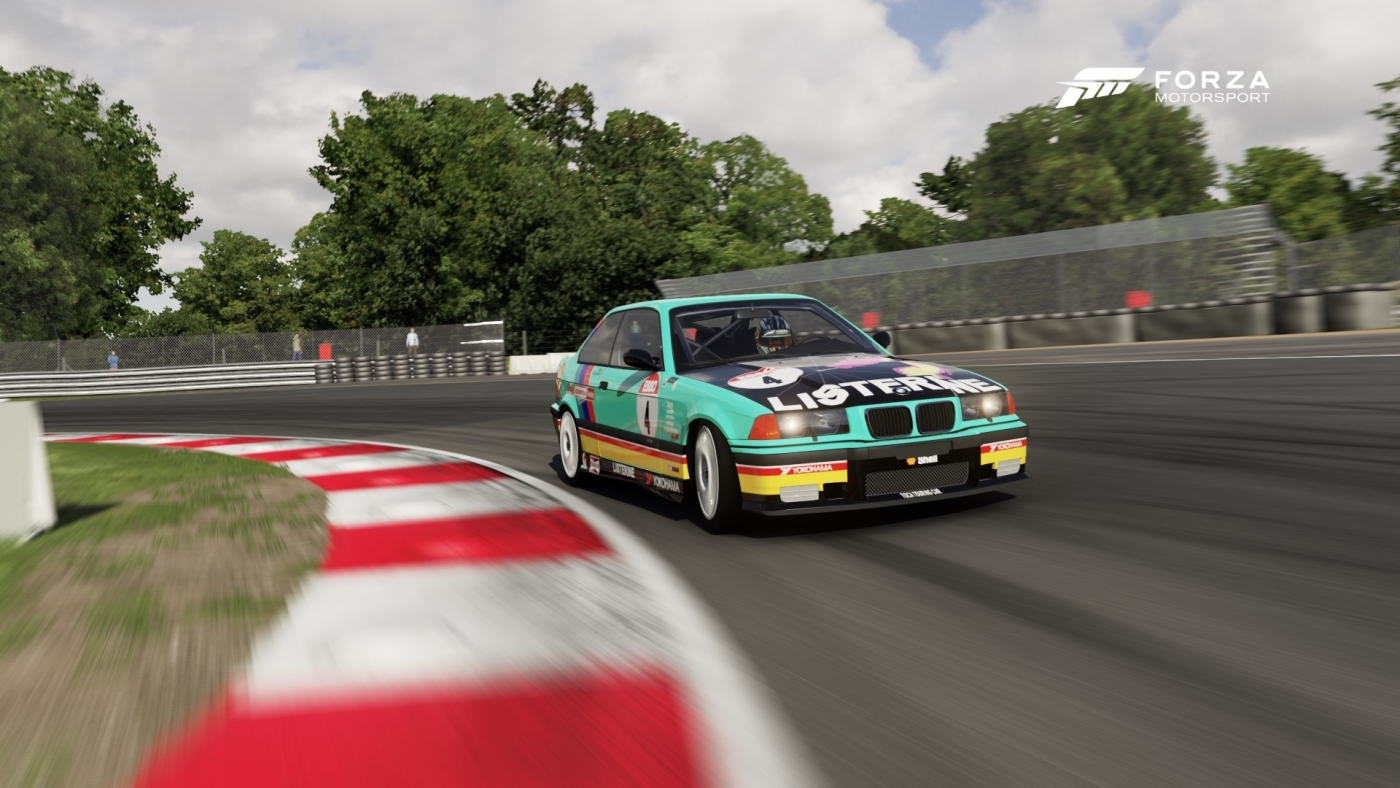 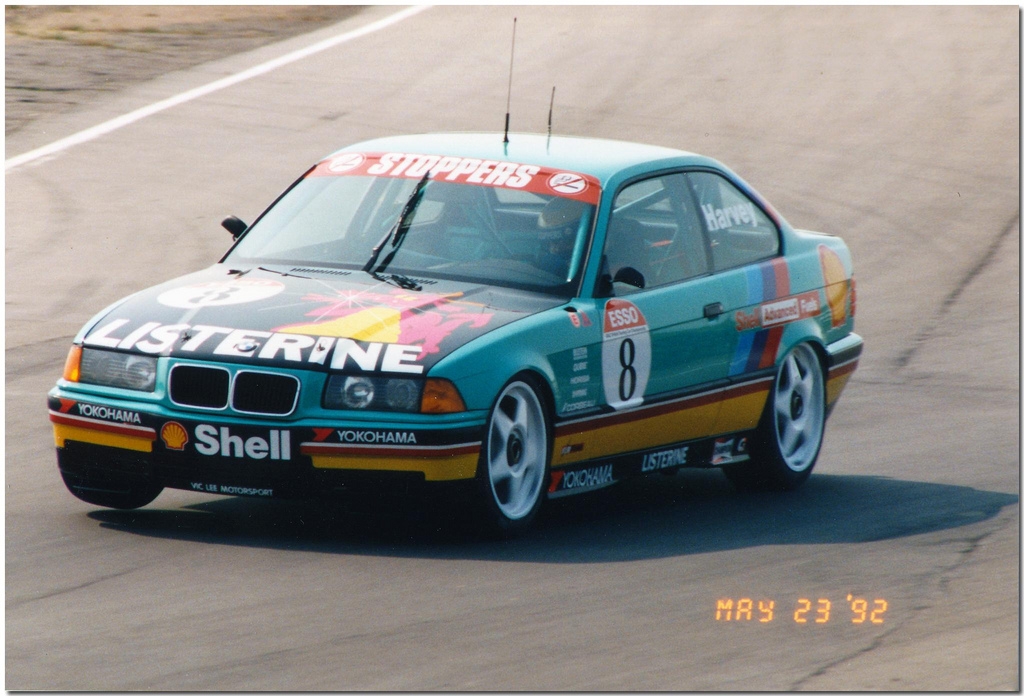 …and now we reach the crux of the matter. Twenty years ago, BTCC fans witnessed what is regarded by many to be the best motor race of all time; not just in Touring Car racing, but of any motorsport. I’m talking, of course, about the 1992 season finale at Silverstone. It was a race of such stagecraft that it could have been penned by Hollywood’s most dramatically-inclined scriptwriters and directed by Michael Bay; as the Championship zeroed in on its final round at Silverstone’s Grand Prix circuit, the title could have been taken by any one of three drivers – John Cleland in the Vauxhall Cavalier, Will Hoy in the Toyota Carina, or Tim Harvey in the BMW 318is. There was still all to play for, and the blood was up for the title-fight contenders. 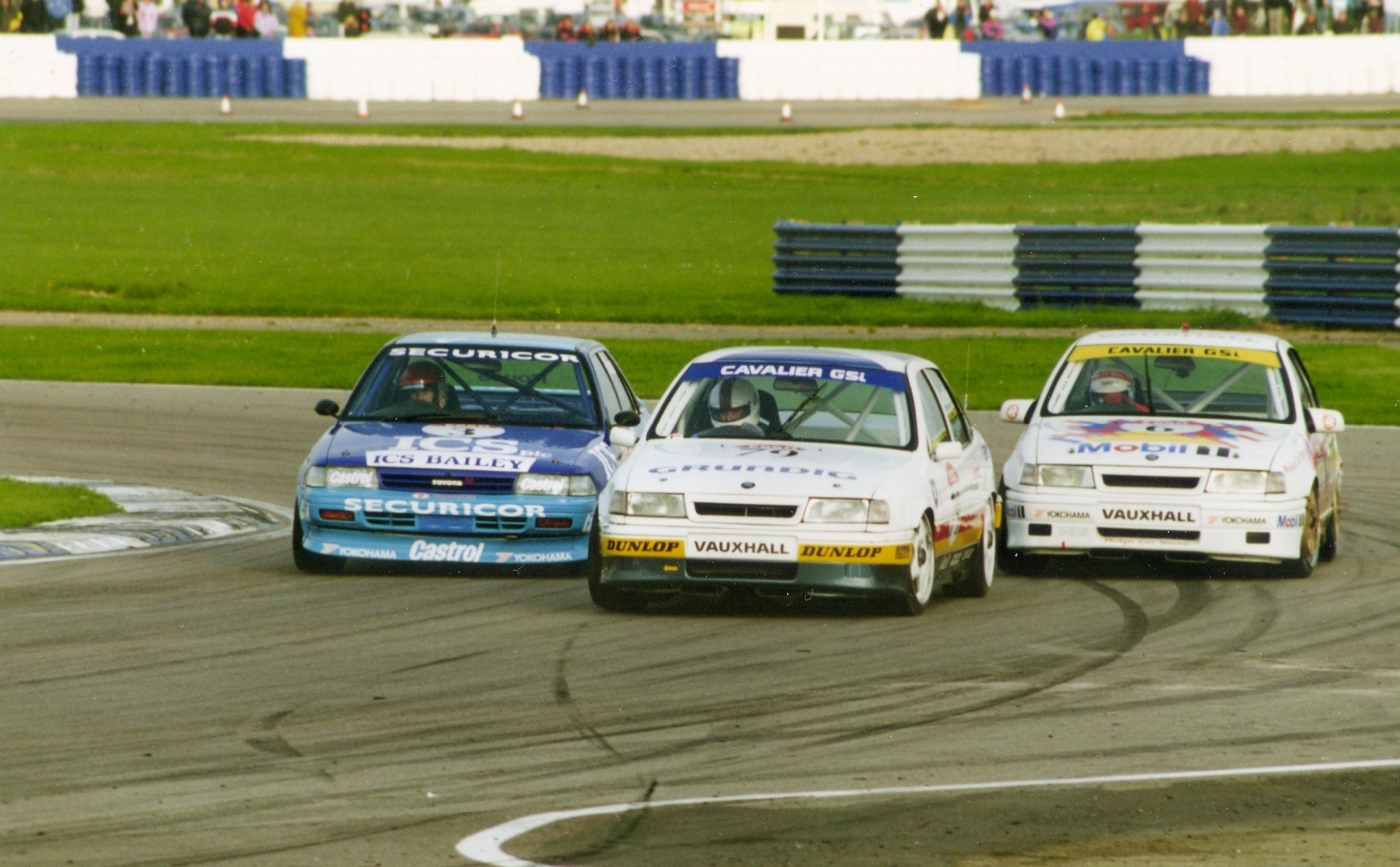 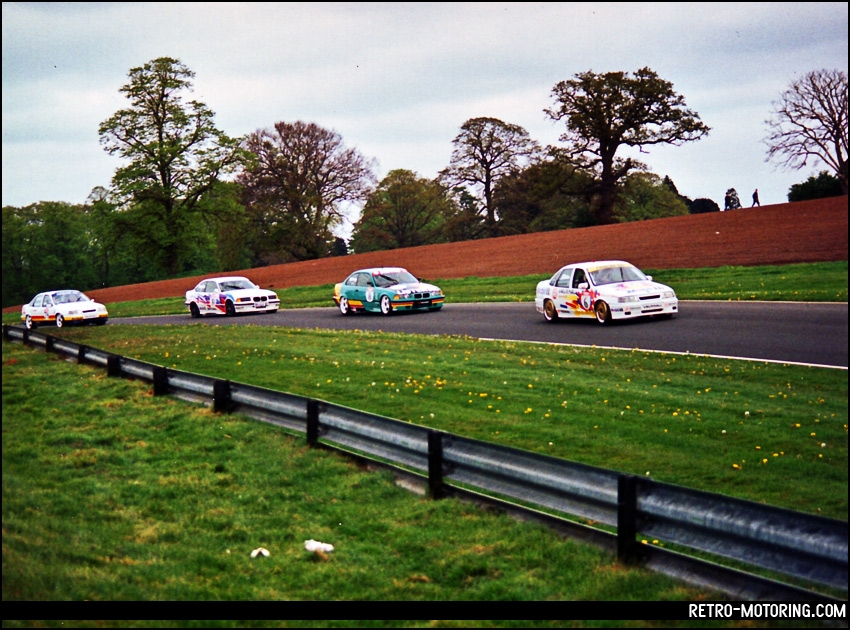 To throw a little extra drama into the mix – as if it were needed – the qualifying was dominated by drivers that sat further down the points table; pole was taken by the indomitable Andy Rouse in his Carina, Jeff Allam was second in his Cavalier, the sister car to Cleland’s. In third place on the grid was Julian Bailey in another Carina, while the fourth spot was occupied by Steve Soper in his Listerine-liveried 318is, stablemate to Tim Harvey’s steed. Steve Soper figures in bold in the dramatis personae of this race, thrice underlined in red. I’ll ruin the surprise now and say that he didn’t take his BMW to victory, although you shall see shortly why his drive was so pivotal… 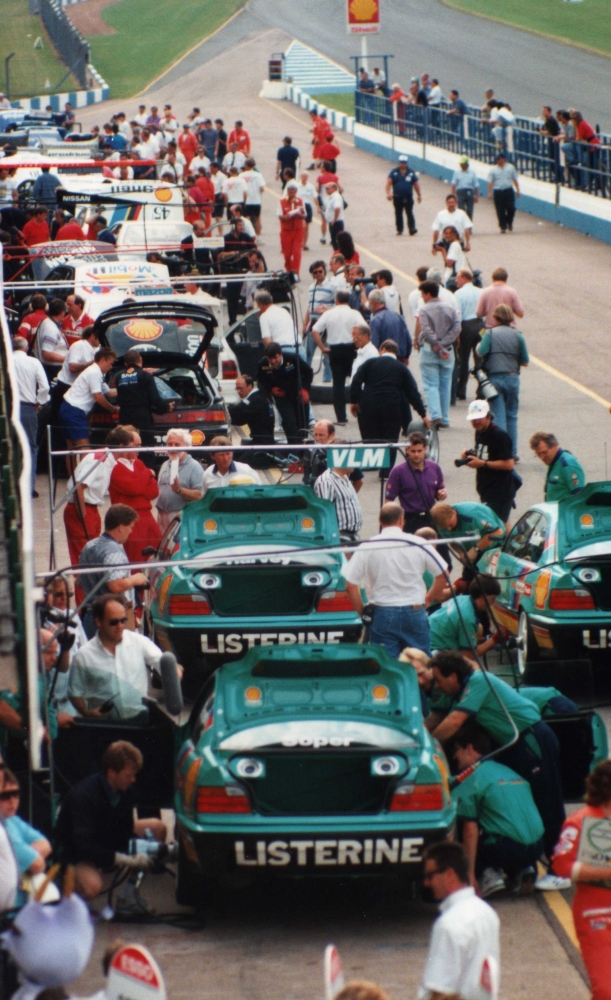 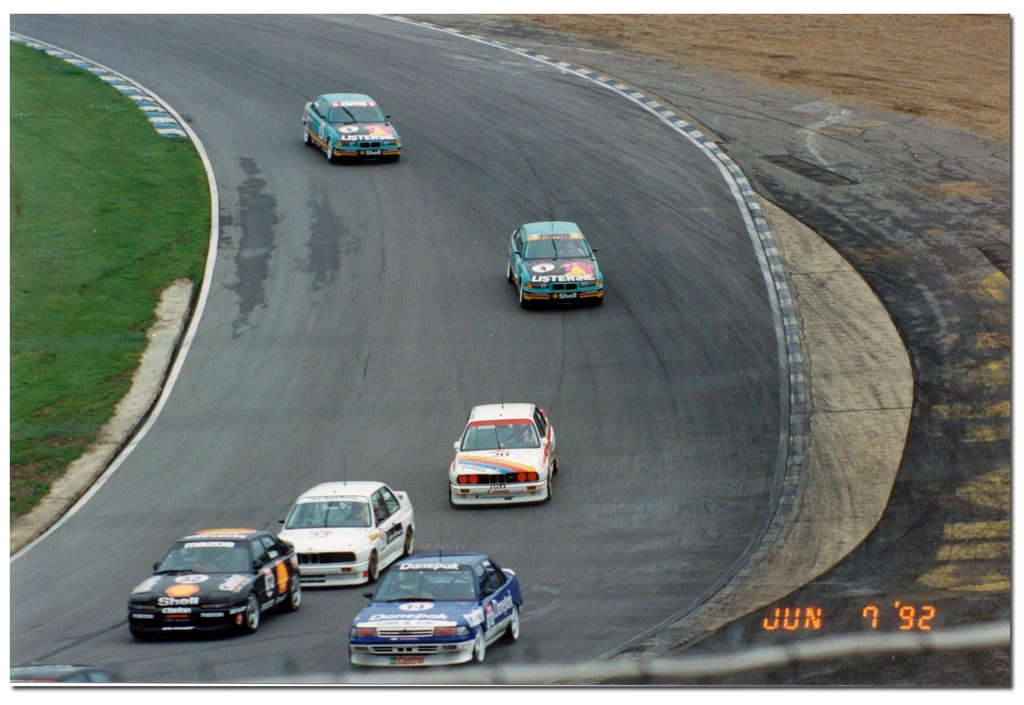 So where were our Championship contenders, Cleland, Hoy and Harvey? They’d qualified in seventh, ninth and twelfth respectively, so the crowds knew that they were in for a frisky fight. The 15 lap race would indeed be a showdown. Harvey and Hoy both had a strong start, with the latter passing Cleland on the first lap. Steve Soper, way up ahead, made a move on David Leslie’s Ecurie Ecosse Cavalier, but in his furious scrabble to pass (he’s a tenacious helmsman, Soper), the two made contact and the BMW span out, unfortunately to be collected on the way past by Rob Gravett’s Peugeot 405 MI16. As the pack streamed past, Soper found himself dead last with heavy rear damage to his car, his bumper hanging off at a jaunty angle. In-car footage of his charge to catch up is little short of breathtaking, applying full-lock and screaming sideways back into contention, then punching at the gearstick as if he was trying to send it through the bulkhead and straight into hell. You may well have heard the phrase ‘driving out of his skin’ applied to any number of racing drivers past and present, but you haven’t seen the full fury of a bitter comeback charge until you’ve seen Soper’s angered blitz on that grey October day in ’92. 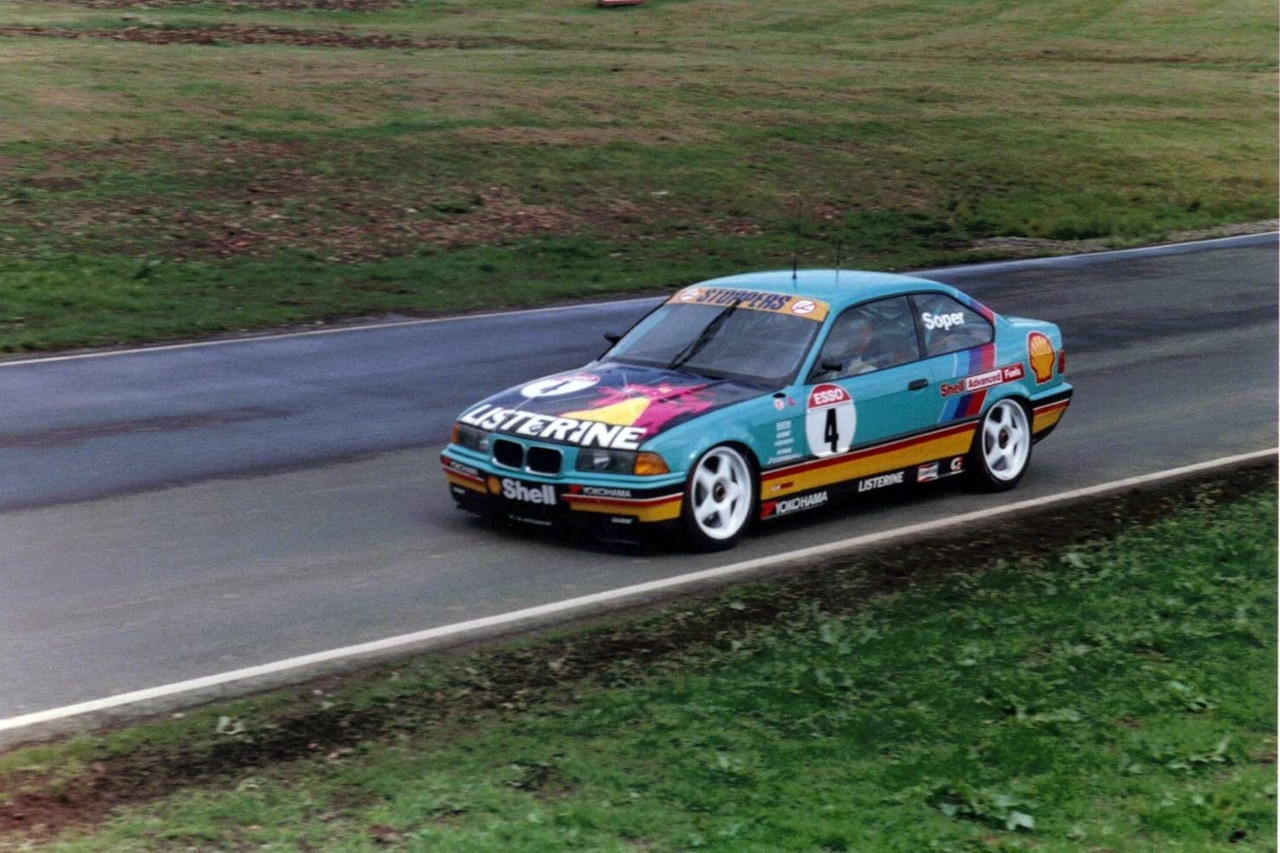 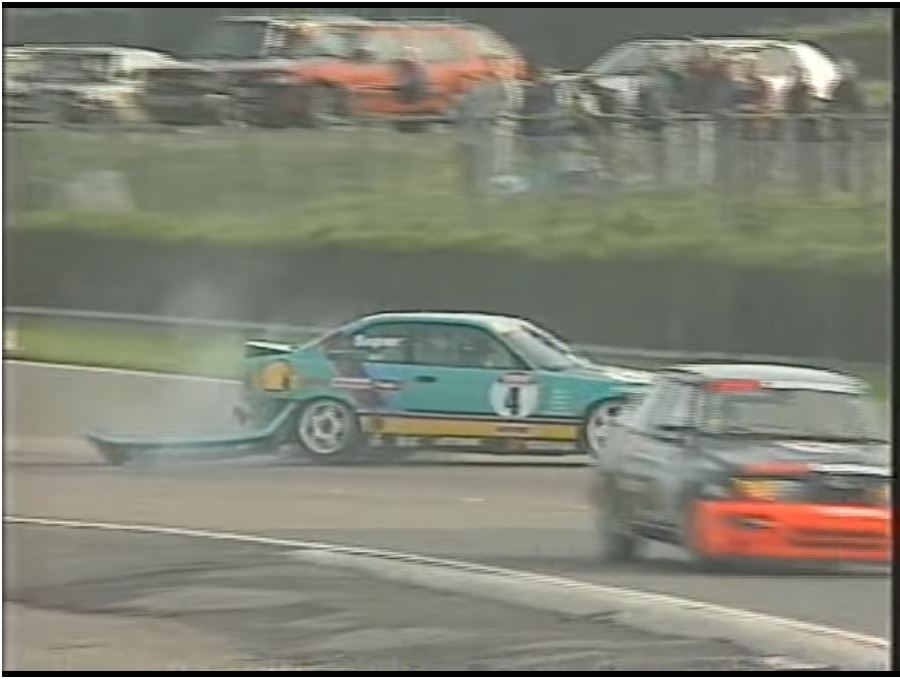 Nearer the front of the field there was all sorts of banging and clattering going on, the three Championship hopefuls eagerly tearing after the taste of Champagne, while the rest of the field – all at an approximate level of parity in terms of power and performance, remember – were forcing every ounce of effort towards grabbing one last podium place. In what seemed like no time, Hoy, Harvey and Cleland were sitting in fourth, fifth and sixth, each more determined than the last to eke out an extra iota of thrust, to cut a closer line through Becketts, to brake later at Bridge, to show everybody else on the track that they were the dominant force for the British Touring Car Championship. Soper, driving like a man possessed, much to the near-apoplectic gobsmackery of commentator Murray Walker, had managed to shove his way up to seventh place, his gearbox screaming in an agony as raw as that suffered by the 318is’ hind quarters (now painfully bumper-free). 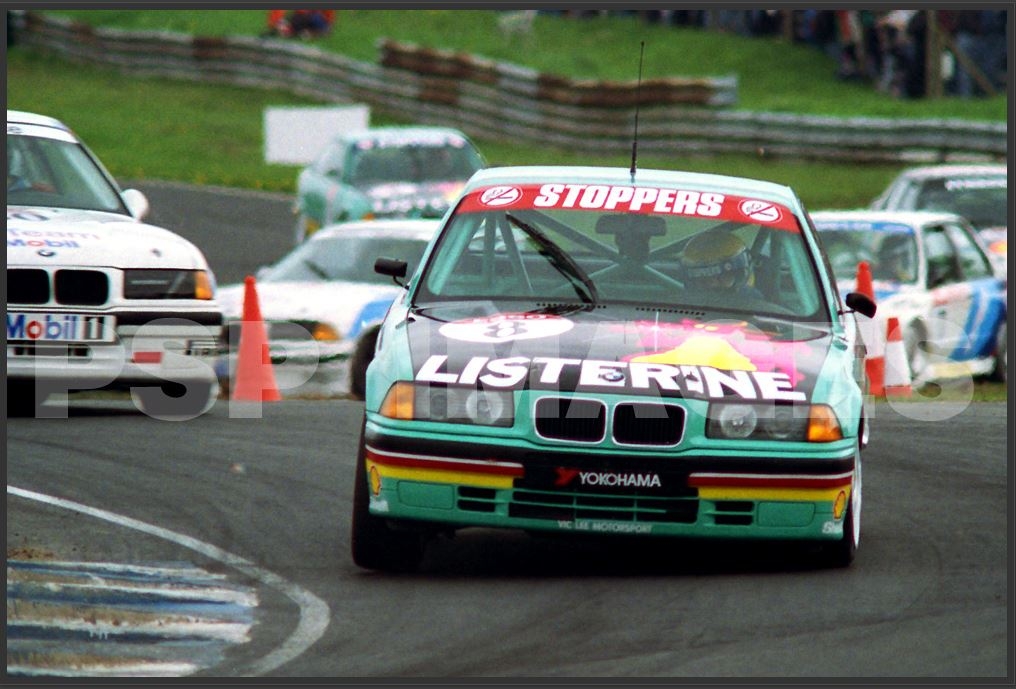 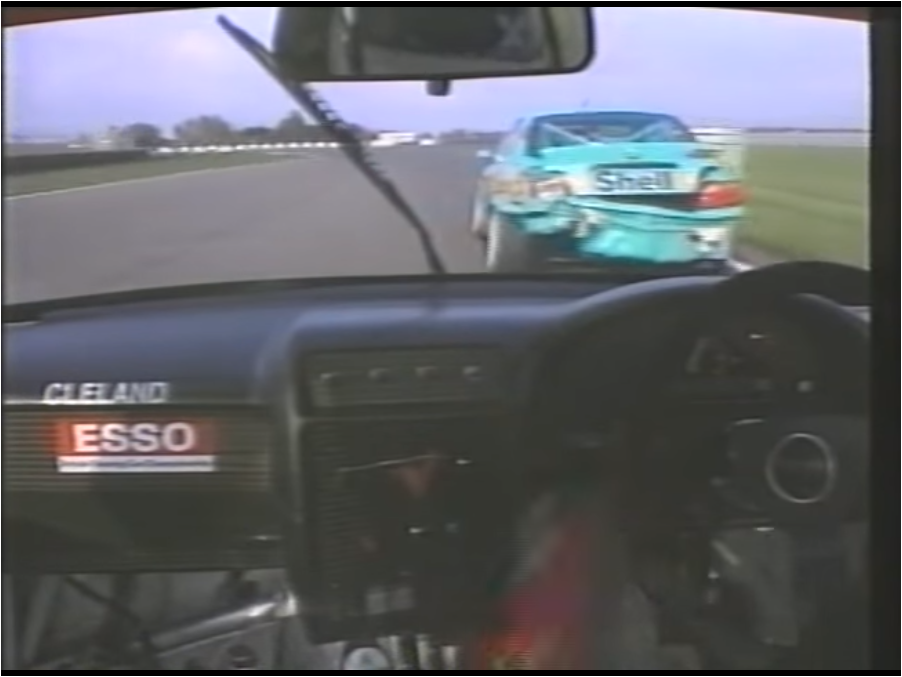 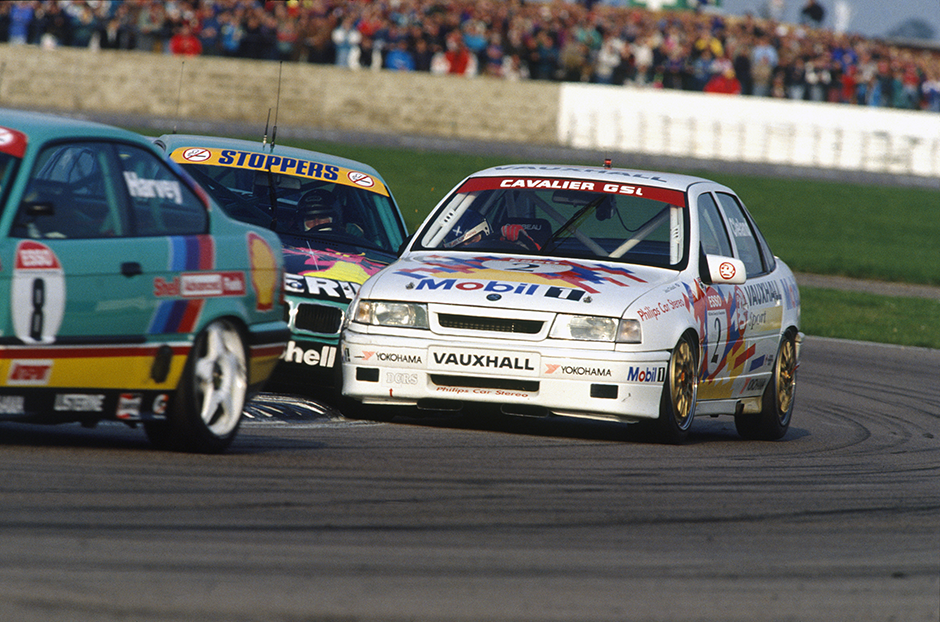 Two laps from the chequered flag Harvey attempted to pass Hoy through Copse, the pair running doorhandle-to-doorhandle; Harvey, with the inside line, drifted wide at the exit and forced Hoy off the track, and in the furious mêlée Cleland and Soper screamed past. Cleland was now in fourth position which, given the number of points he’d accrued through the season, would have gifted him the Championship. Soper was hot on his tail, an unstoppable force of pure retribution, and in sixth and seventh sat Harvey and Hoy. On the entry to Club, Soper powered past the Vauxhall; the on-board footage clearly showed Cleland giving him the finger. ‘I’m going for first!’, yelled the ever-diplomatic Murray. 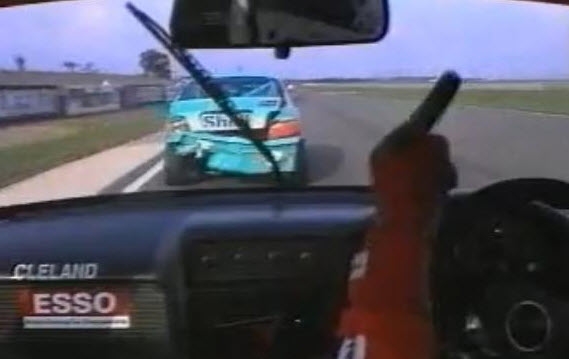 Exiting Abbey, Harvey used the BMW’s superior rear-drive traction to get alongside Cleland, passing him through Bridge. Soper, ever the team player, dived out of the way to allow Harvey to pass into fourth, then ran defence behind him to block Cleland. As they shot through Priory they were nose-to-tail, then the Cavalier scythed under Soper into Brooklands; Soper blocked the manoeuvre and the two collided, the Cavalier rounding the curve on two wheels. Cleland was half a car-length ahead as they approached the right-hander, so the intrepid (and clearly slightly unhinged) Soper dove across the grass on the inside of the corner, smashing into Cleland at the apex and spinning them both out of the race. 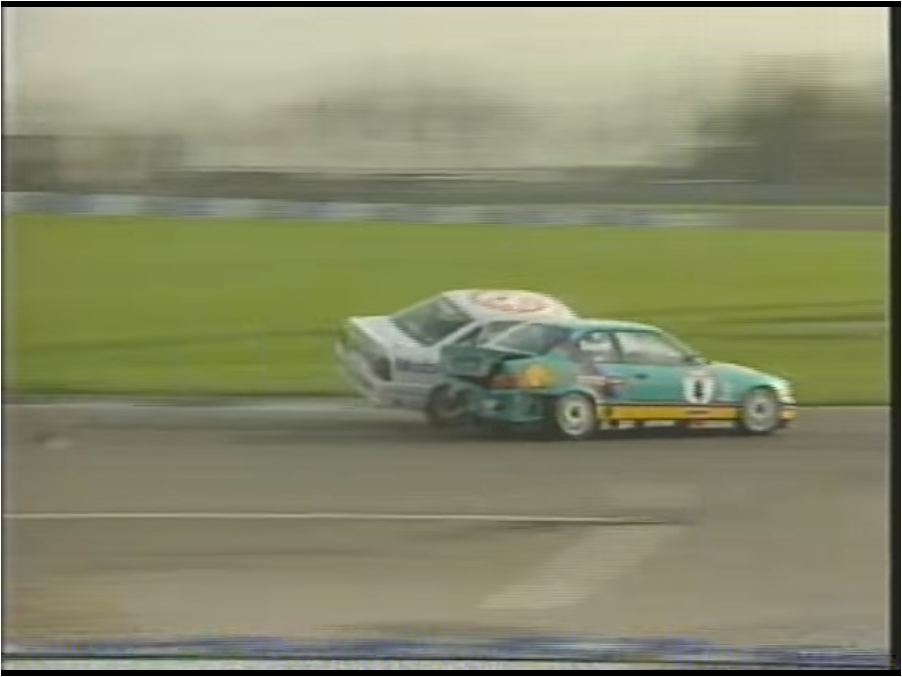 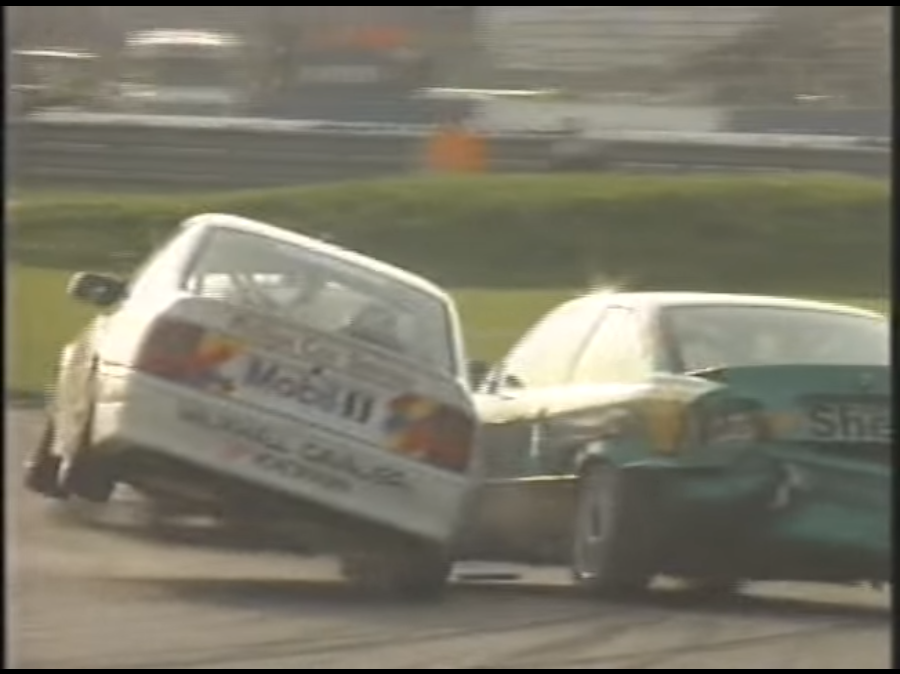 With just a lap to go, Tim Harvey eased toward the finish line in fourth place, picking up enough points to win him the Championship. Hoy finished three seconds behind him. The podium spots went to Andy Rouse, Jeff Allam and David Leslie, but none of that really matters to the history books. What we witnessed that day – the Listerine BMW taking the controversial win, the angry Scotsman in his totalled Vauxhall, the gladiatorial might of a spurned racer on a kamikaze drive – will resonate through the annals of motorsport lore forever. You can be sure that John Cleland’s still fuming about it. 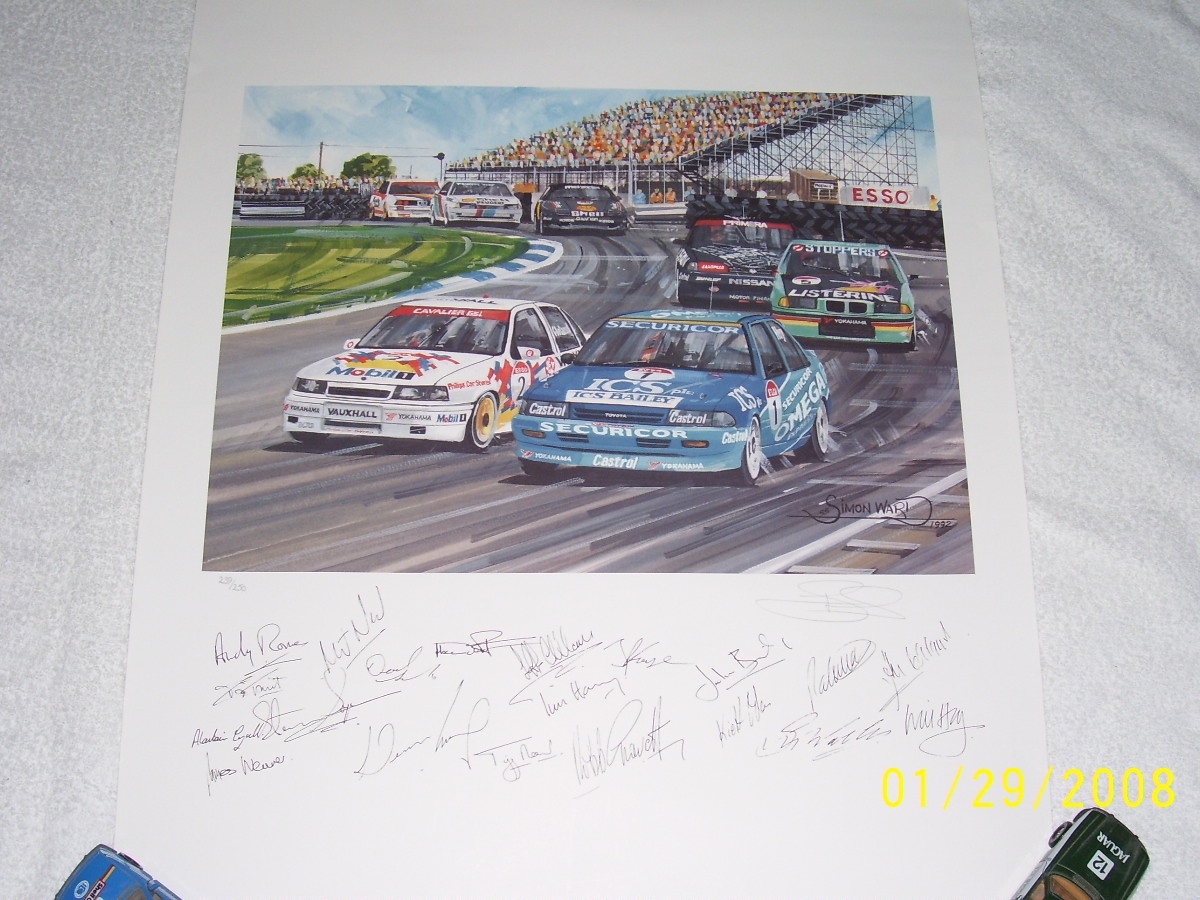 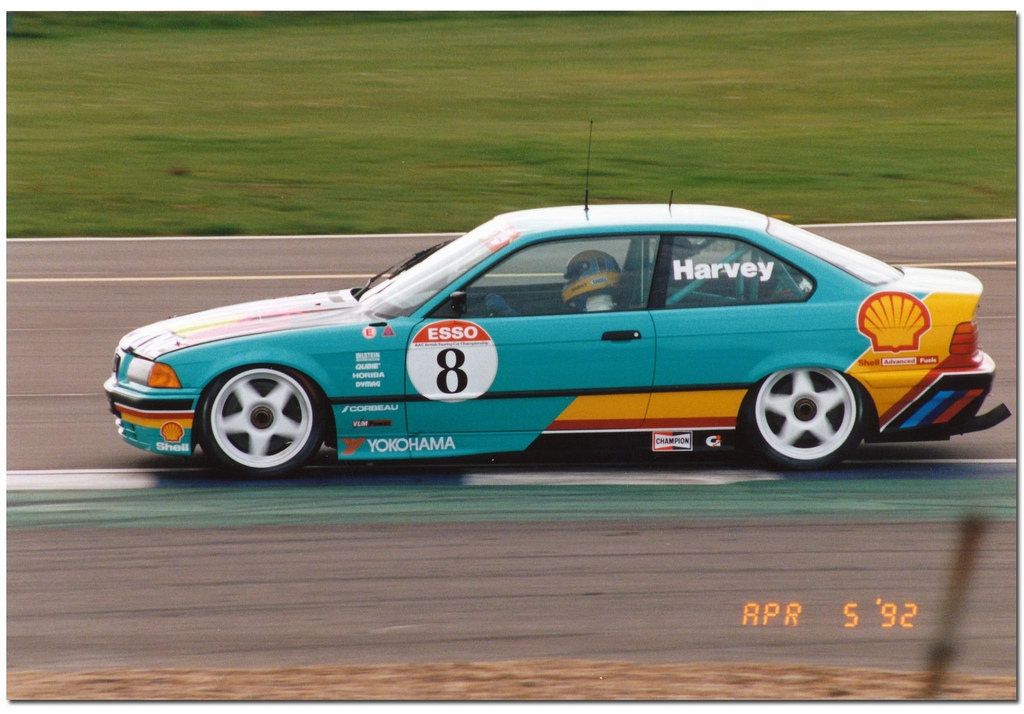 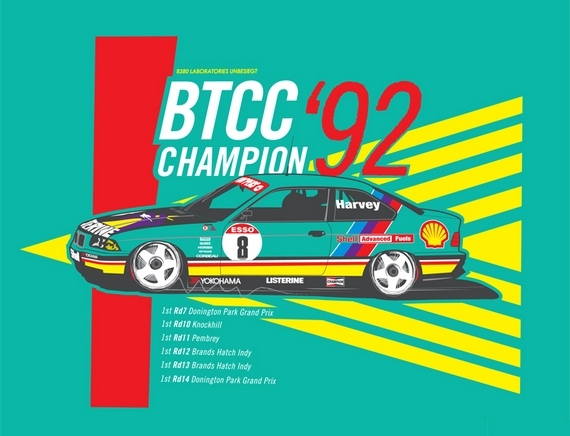 And with that season, the 318is put its name in the history books. The 318is was no longer overshadowed by its older brother and could later flourish into the second generation racer, The e36 M3. The 318is had two mores year of battle in the BTCC. In 1993, the Listerine BMW was liquidated as it had been owned by Vic Lee Racing. However, the company was liquidated when Lee and others were convicted of importing drugs hidden in their race transporters worth £6 million, suspicions having been raised due to the number of times the team found it necessary to test at the Zandvoort circuit in the Netherlands. Lee received a sentence of twelve years’ imprisonment in 1993. The team was liquidated, and some of the assets sold went to the team’s driver Ray Bellm and Steve Neal, who together formed Team Dynamics. 1993 saw an overall driver’s championship win by Joachim Winkelhock in the 318is. Eight of the 14 races in 1993 were won by the 318is and the success continued into 1994. By 1996 the e36 318is was replaced by the 320i and its presence was gone almost as quick as it came. Wacth the videos below for the full race, a short clip of the last 3 laps of the final and BTCC driver/ Host Tiff Needel comparing all three cars on the track. 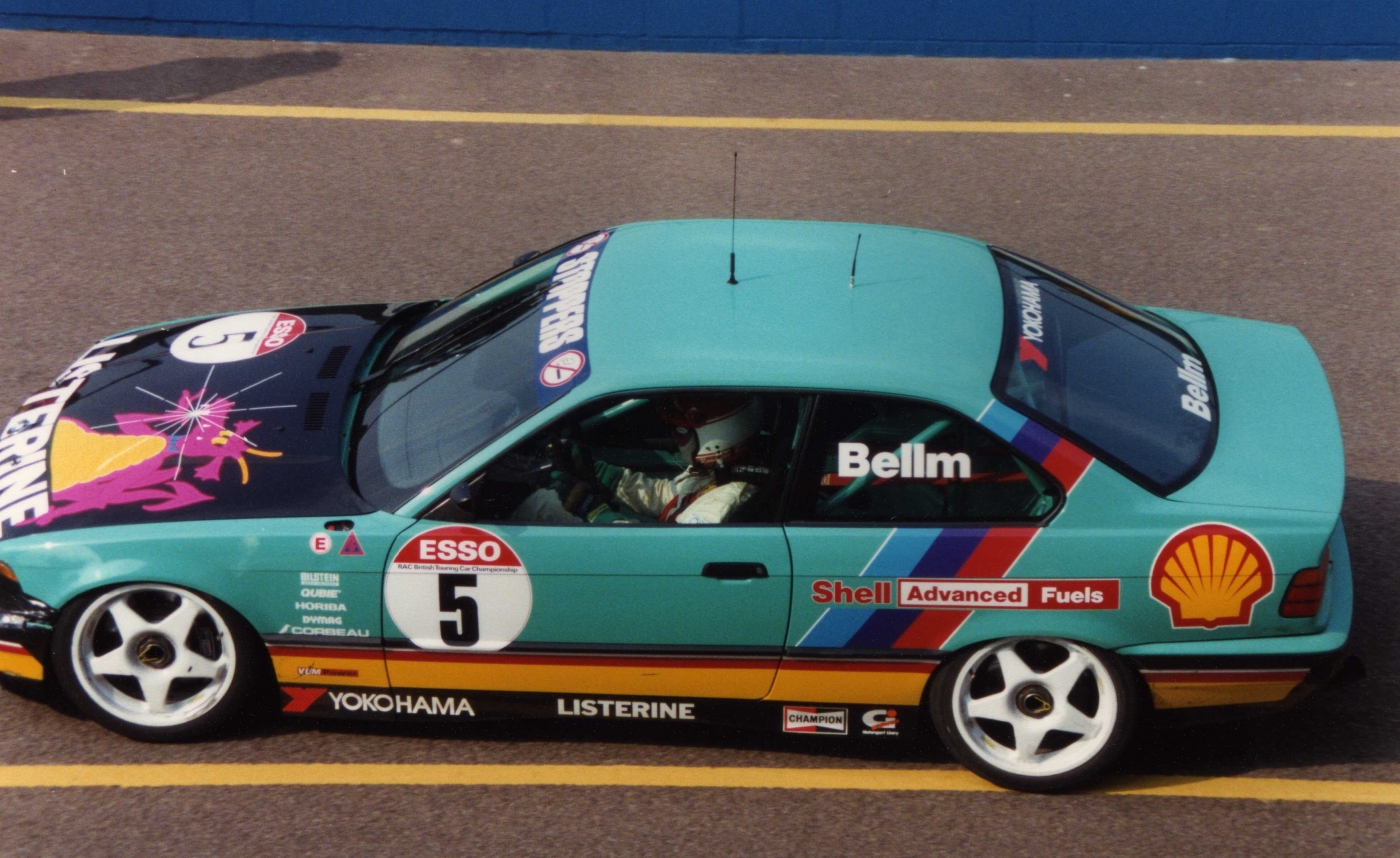 Pre Race and Full 15 Lap Final in the video below

And a bonus of Tiff driving three superstars from the 1992 Championship Final!!