In the words of BMW’s famous automotive designer Paul Bracq, an automobile is a moving sculpture. A great video released by BMW this past month, tells the Story of Bracq, and one of his most unique sculptures of all– the BMW Turbo concept. This running, driving car, won the Concept Car of the year in 1973, and remains something he is very proud of. Enjoy this video as found originally via the BMW CCA website here.

Video: Going Back To The BMW Turbo And The Man Who Designed It.

BMW enthusiasts who have seen BMW’s first concept car—the BMW Turbo—either in person on in pictures, can never forget it. Some consider it one of the most beautiful cars the company ever envisioned. 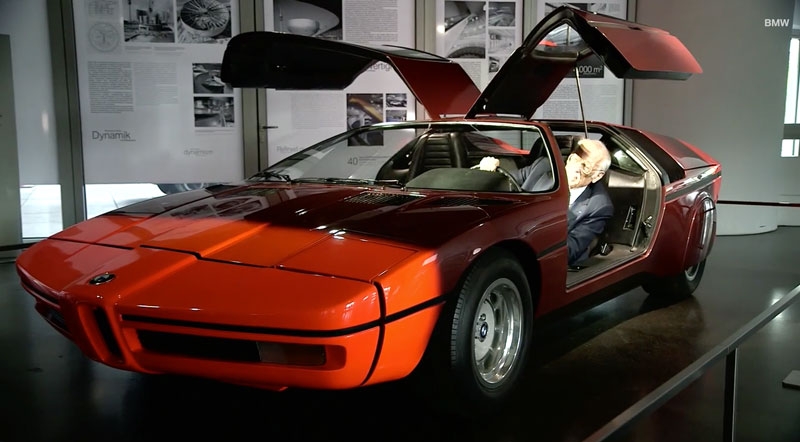 The man who designed it was Paul Bracq, who was BMW’s design director from 1970 to 1974, succeeding Wilhelm Hofmeister in the position. (You may have heard of Hofmeister’s most durable BMW design legacy, the Hofmeister Kink.) Bracq also worked for Citroen, Mercedes-Benz, and Peugeot, and even worked on designing the French TGV high-speed passenger train.

We’re mainly interested in the BMWs for which Bracq was directly responsible—the Turbo concept and the first E23 7 Series—and as design director on other BMWs that began or completed the design process under his watch and have since become iconic: the E21 BMW 3 Series, the E12 BMW 5 Series, the 2002 Turbo, the E24 6 Series.

BMW has some interesting videos on its YouTube channel. We like the ones that show us the classic BMWs we grew up with, especially when they also tell the stories of the people who brought them to us.—Scott Blazey

For those not all that familiar with the BMW “Turbo” concept probably do not realize how impactful this design was at the time of unveiling.

BMW’s head of design Paul Bracq was given a free rein and considering he had just designed the 300+ kph TGV train, something very exciting could be expected. Clearly inspired by the latest generation of (Italian) supercar, the French designer came up with a wedge-shaped mid-engined machine. Even though the Turbo Concept had a thoroughly modern shape, Bracq had managed to incorporate the classic ‘kidney grille’ in the design. Other striking exterior design cues included the covered rear wheels and the BMW badges on both rear-end corners. The design was created for the 1972 Summer Olympics in Munich and had a long sloping snout, a low profile, and a supercar look and feel. 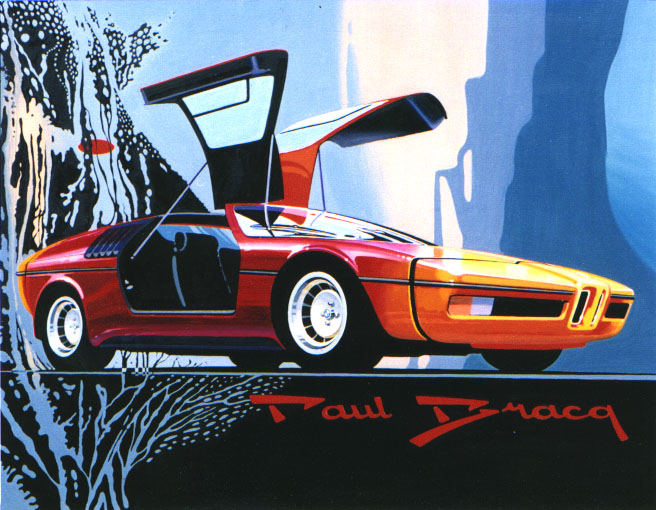 This two-door coupe, actually based on a modified 2002 chassis with a mid-mounted engine, was born when BMW’s design director Paul Bracq convinced the board to let him design a concept that would be part design exercise, part technology test bed. Unlike BMW’s previous Bertone concept car, the BMW Turbo is much more well-known. 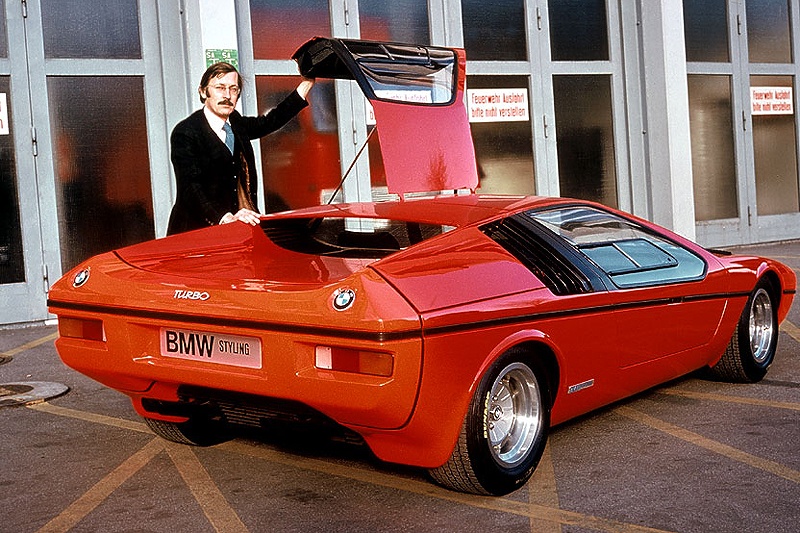 This mid-engined machine, like most concept cars, featured a futuristic look. With a protruding, angled front end and a more sculpted rear end gave the Turbo concept a unique and sports car appearance. In addition the very low center of gravity also made for an inherently safer design. 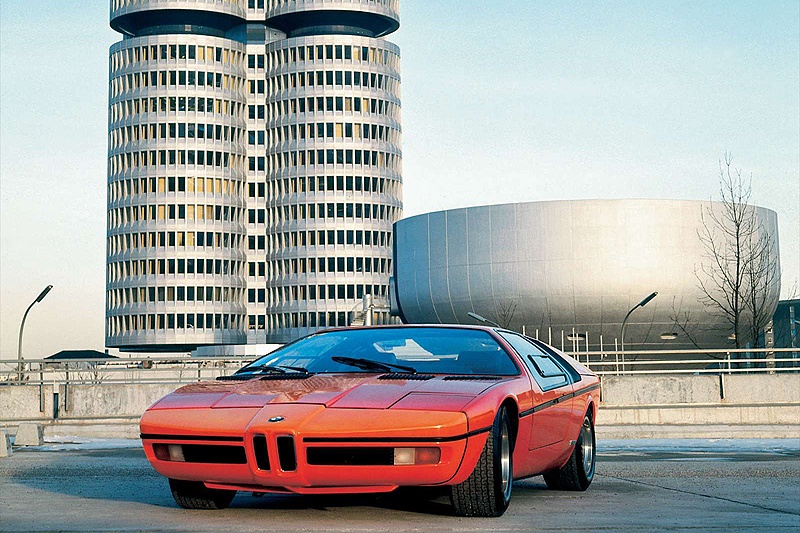 Gullwing doors allowed for easy access in and out, also adding to the supercar aura. In addition the very low center of gravity also made for an inherently safer design. 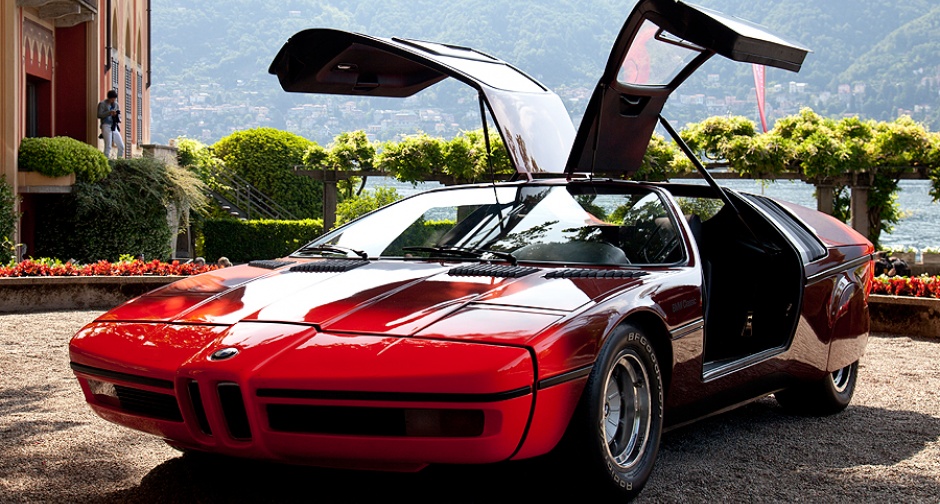 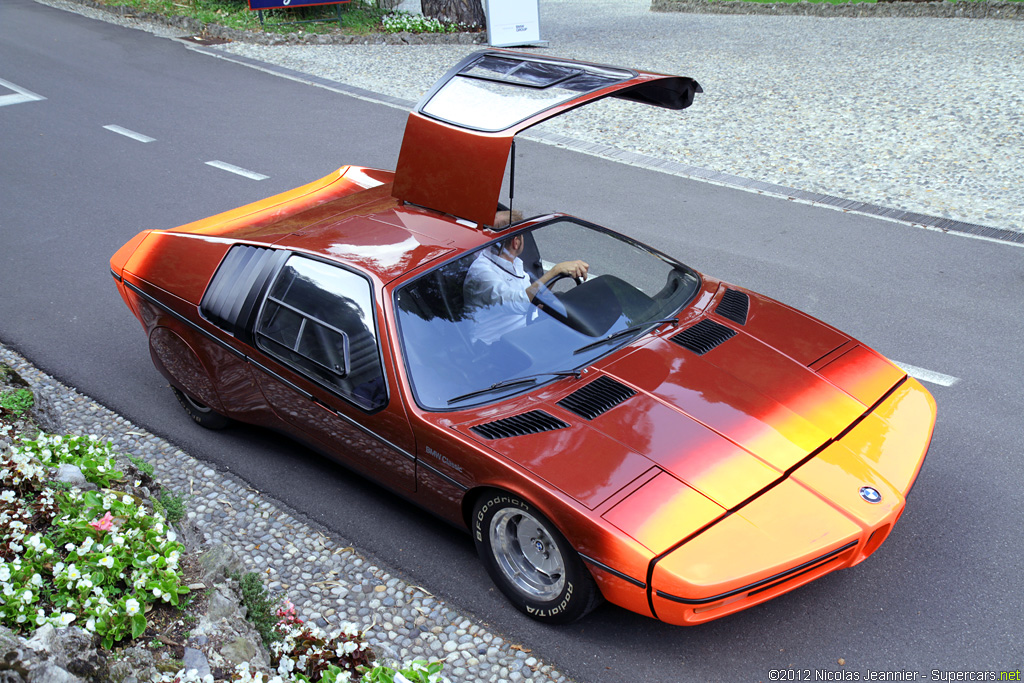 Safety had become an increasingly important consideration following a number of design summits in the early ‘70s, and Bracq used the Turbo to test out a number of safety solutions. He decided against following the conventional shapes of most carmakers and used foam-filled bumper shields incorporated into composites at the front and rear. 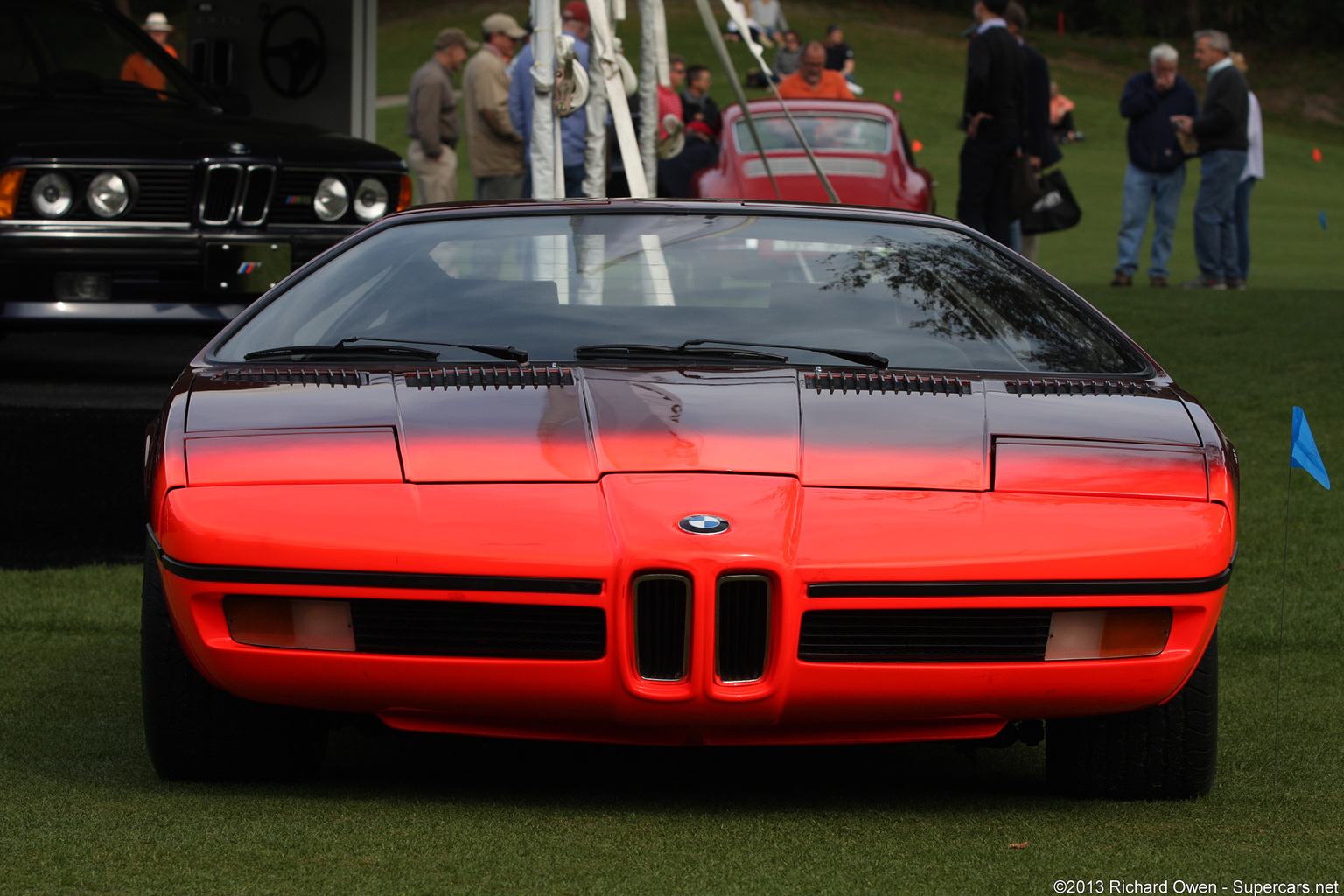 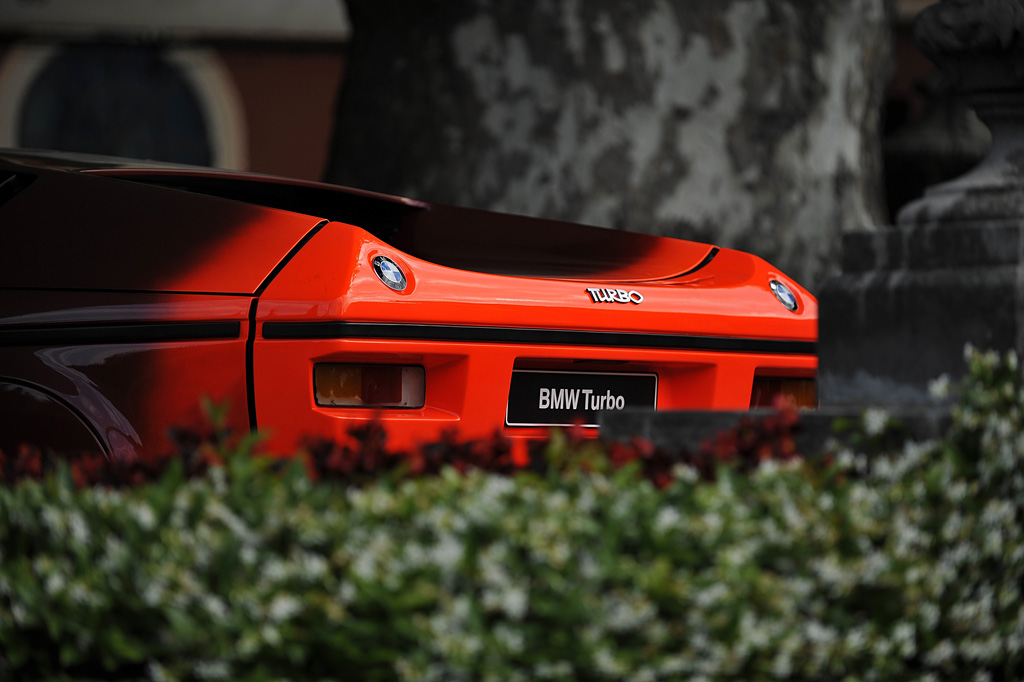 Side impact beams were designed to absorb energy in crashes, while an integrated roll-cage would protect the cabin. Of course, since only two were ever made, we are glad we never had to find out how well the cage worked. 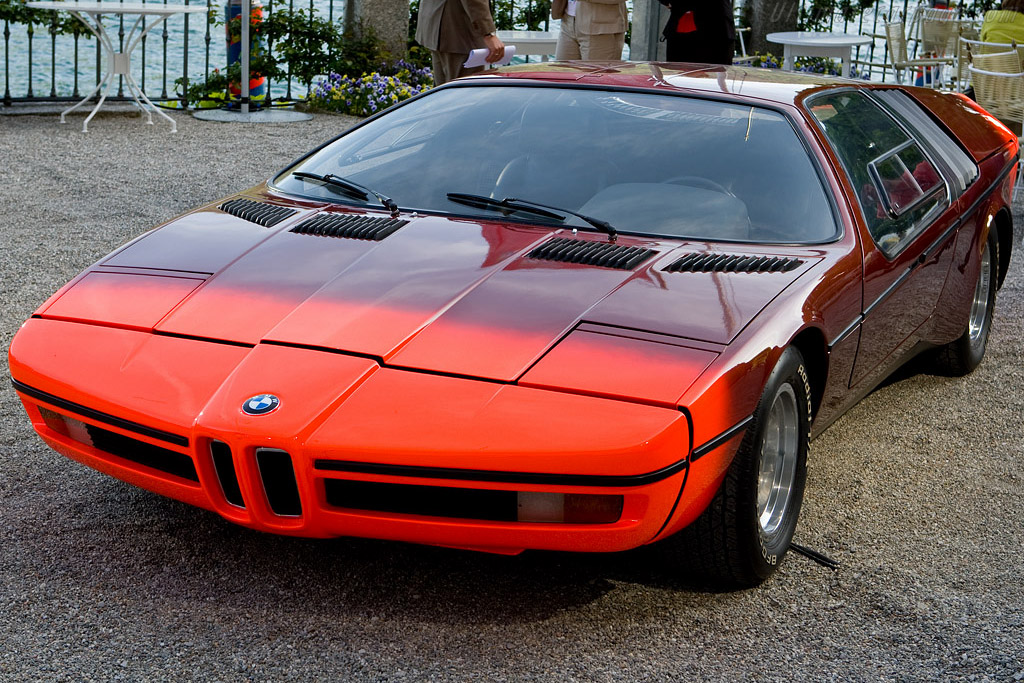 The black band wrapping around the body emphasizes its low, flat, wedge profile, although Bracq’s use of more rounded forms sets it apart from its contemporaries. the photo below is one of the more famous photos shared by BMW, and remains a photo that I remember looking at in awe when I was just a young boy. 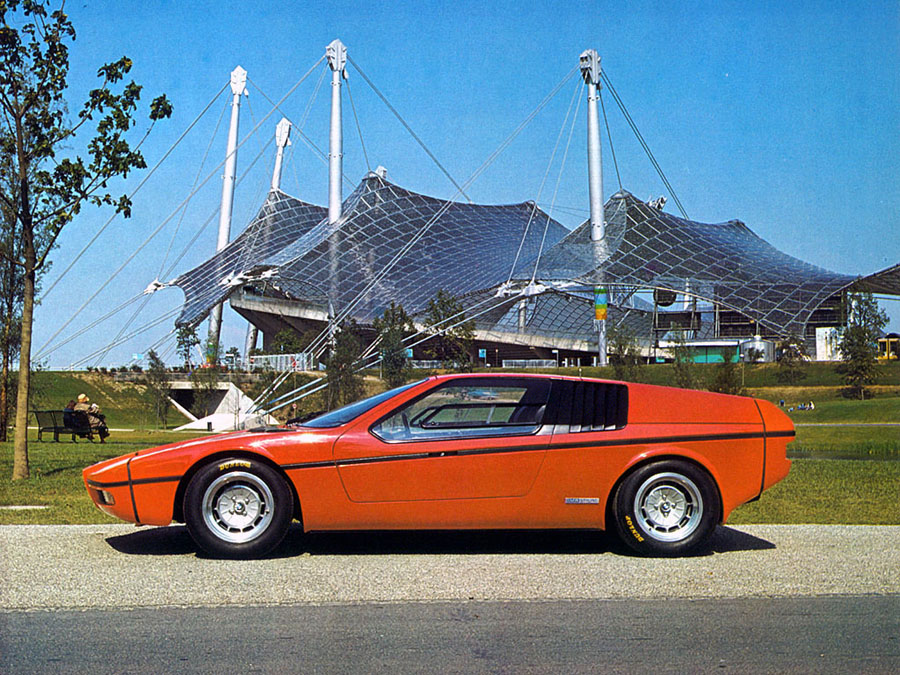 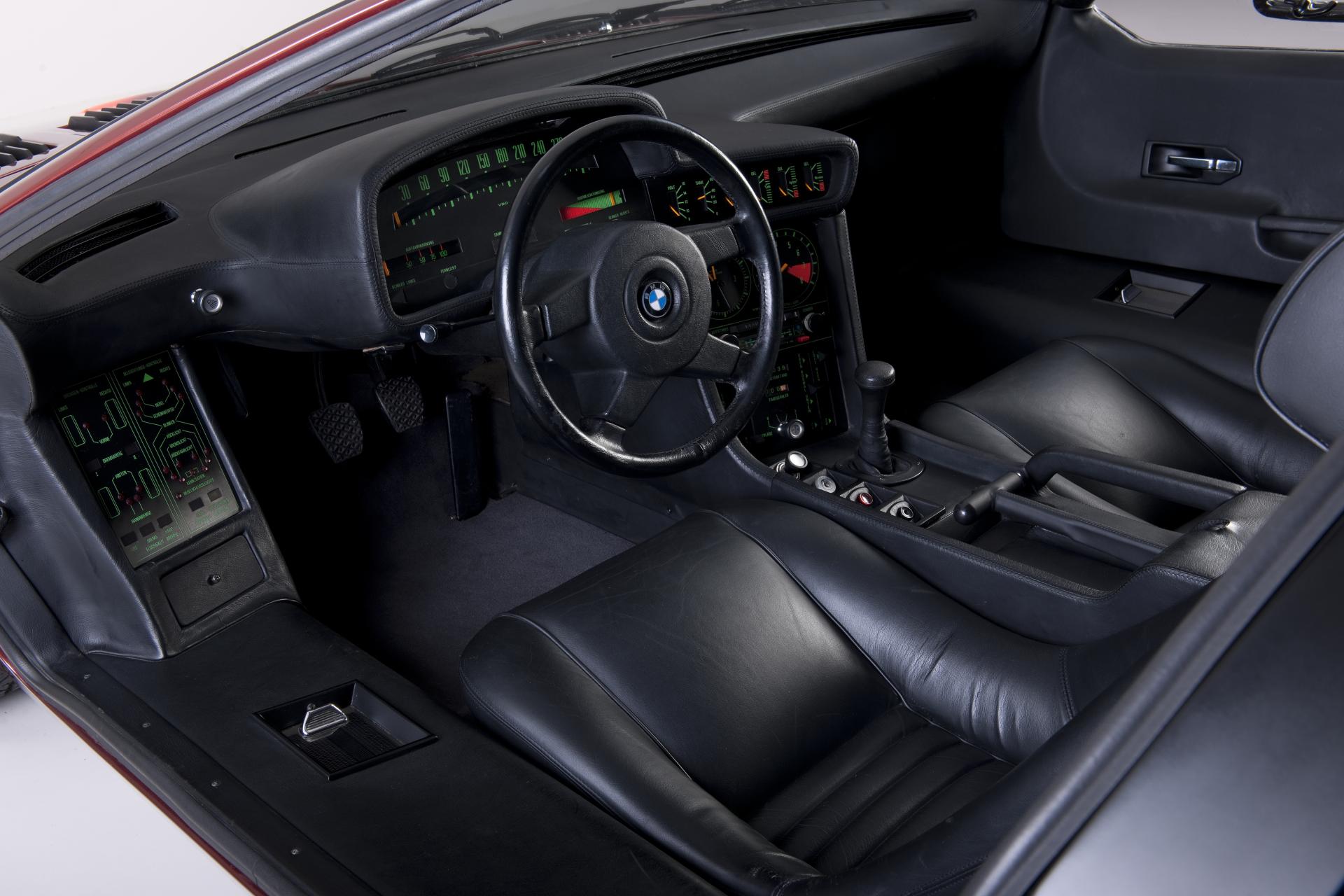 The interior was well detailed, and boasted a bevy of odd instrumentation that was likely inspired by the intense cockpits of fighter jets. Included were passive safety, design and, not least, driver assistant systems. The Turbo concept really was the essence of a concept car, with lights, gadgets and dials that quite possibly inspired the idea of Doc Brown’s Flux Capacitor. 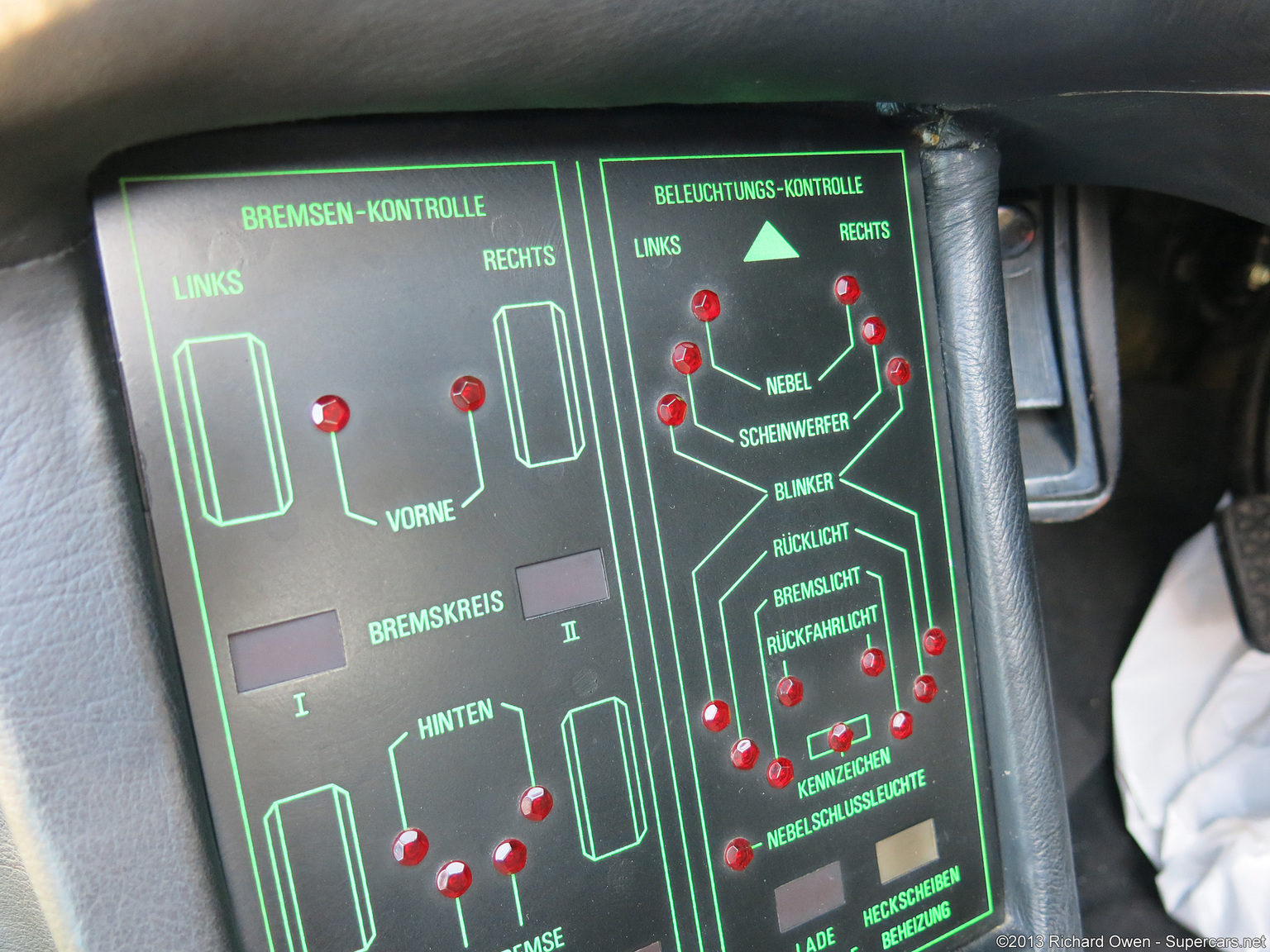 The futuristic cockpit was orientated towards the driver and featured a collapsible steering column with three universal joints that would absorb energy in a crash. 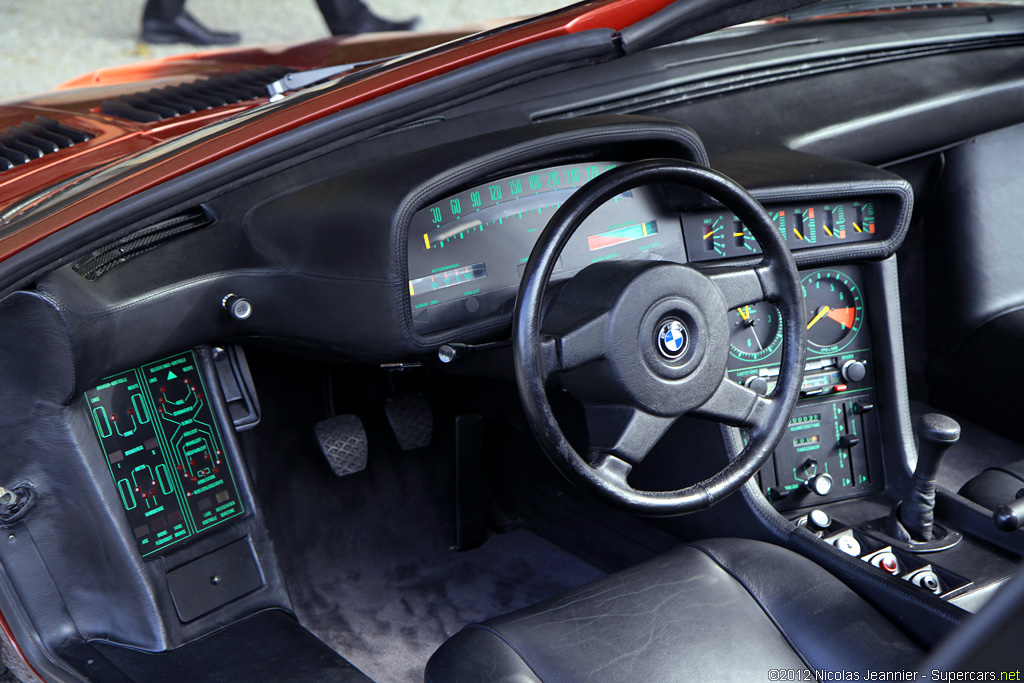 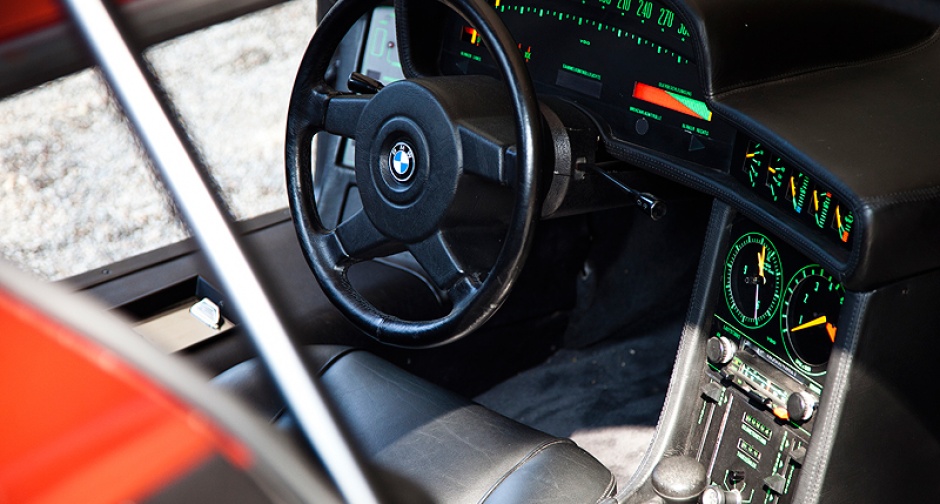 When released to the 1972 Paris motor show, the BMW Turbo was built both as a symbol of the carmaker’s strength after its troubles in the ‘60s and as a celebration of that summer’s Olympic Games in Munich. 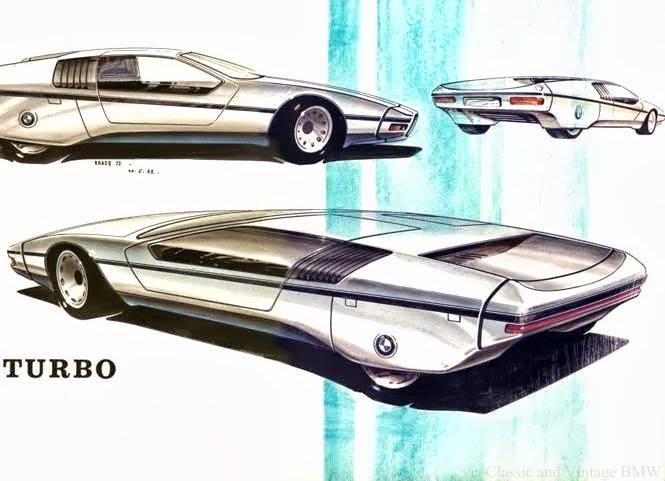 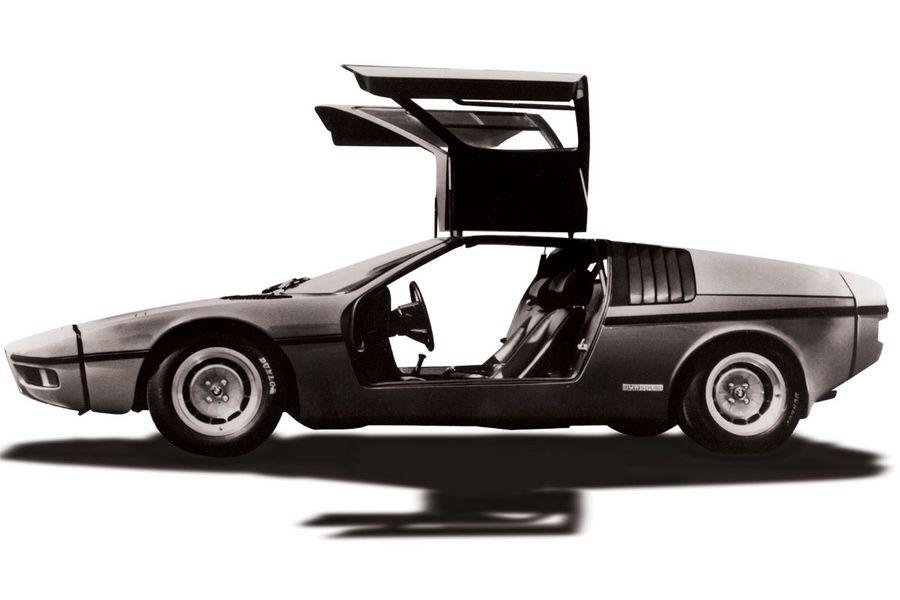 Only two Turbos were ever built, the second being different only in its rear wheel spats and its paintwork, which faded from orange to brown. The fluorescent orange paintjob faded to red to create a truly stunning aesthetic. 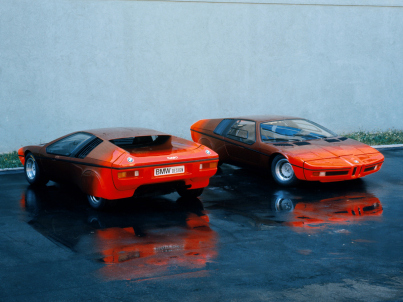 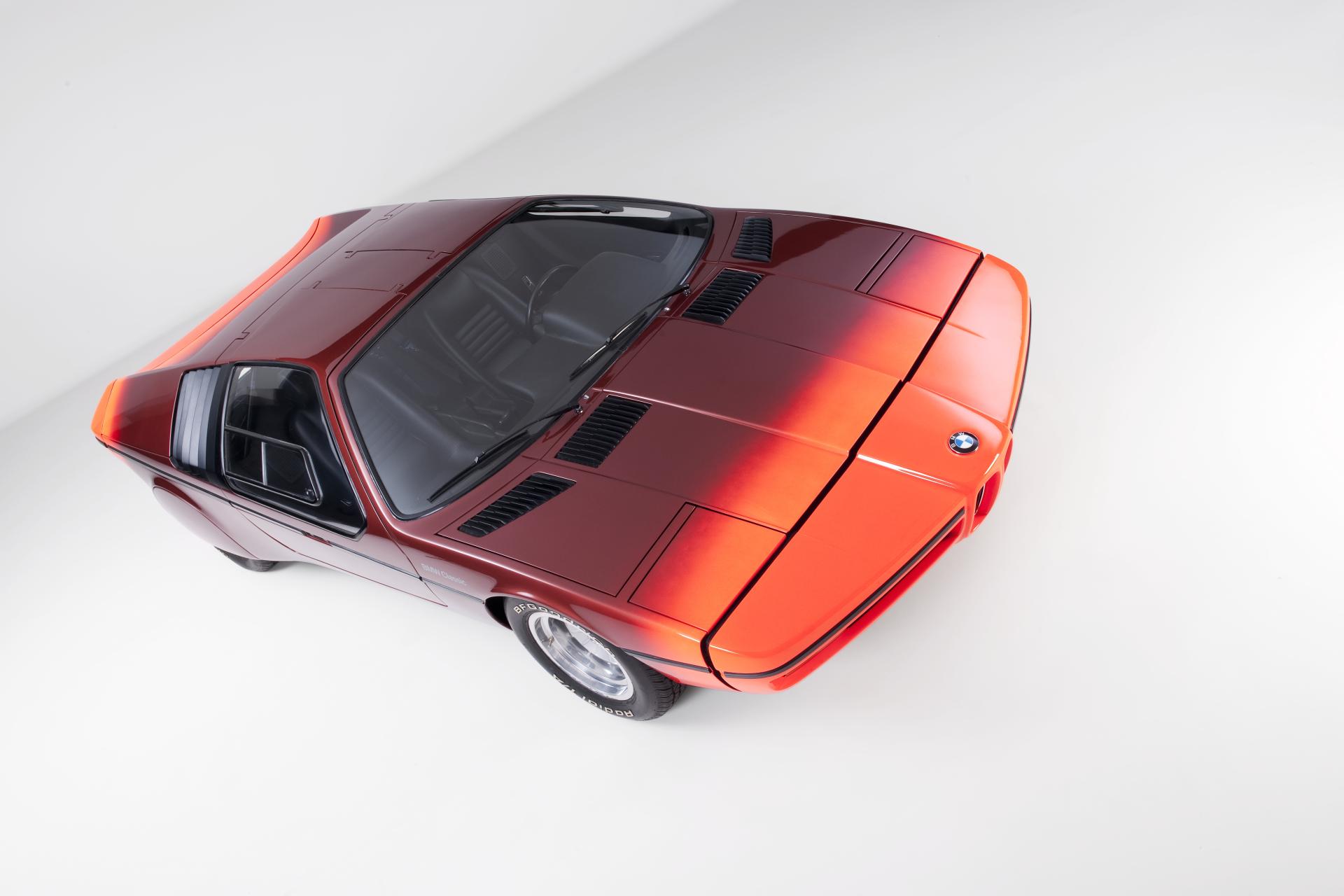 It was very much intended as a showcase for the latest engineering and safety technologies and also underlined that the German manufacturer had left the difficult period of the 1960s well behind. At the time, few could have imagined that the striking concept car would form the basis for the company’s first and to date only supercar (The M1).

Mounted transversely behind the passenger compartment, the four cylinder engine gave the car its name. Originally derived from the popular 2002 model, the two liter unit received a Kugelfisher Turbo charger to boost power to a healthy 200 bhp. In combination with the very slippery shape this power figure does not make the BMW claimed top speed of 250 km/h sound over-ambitious. 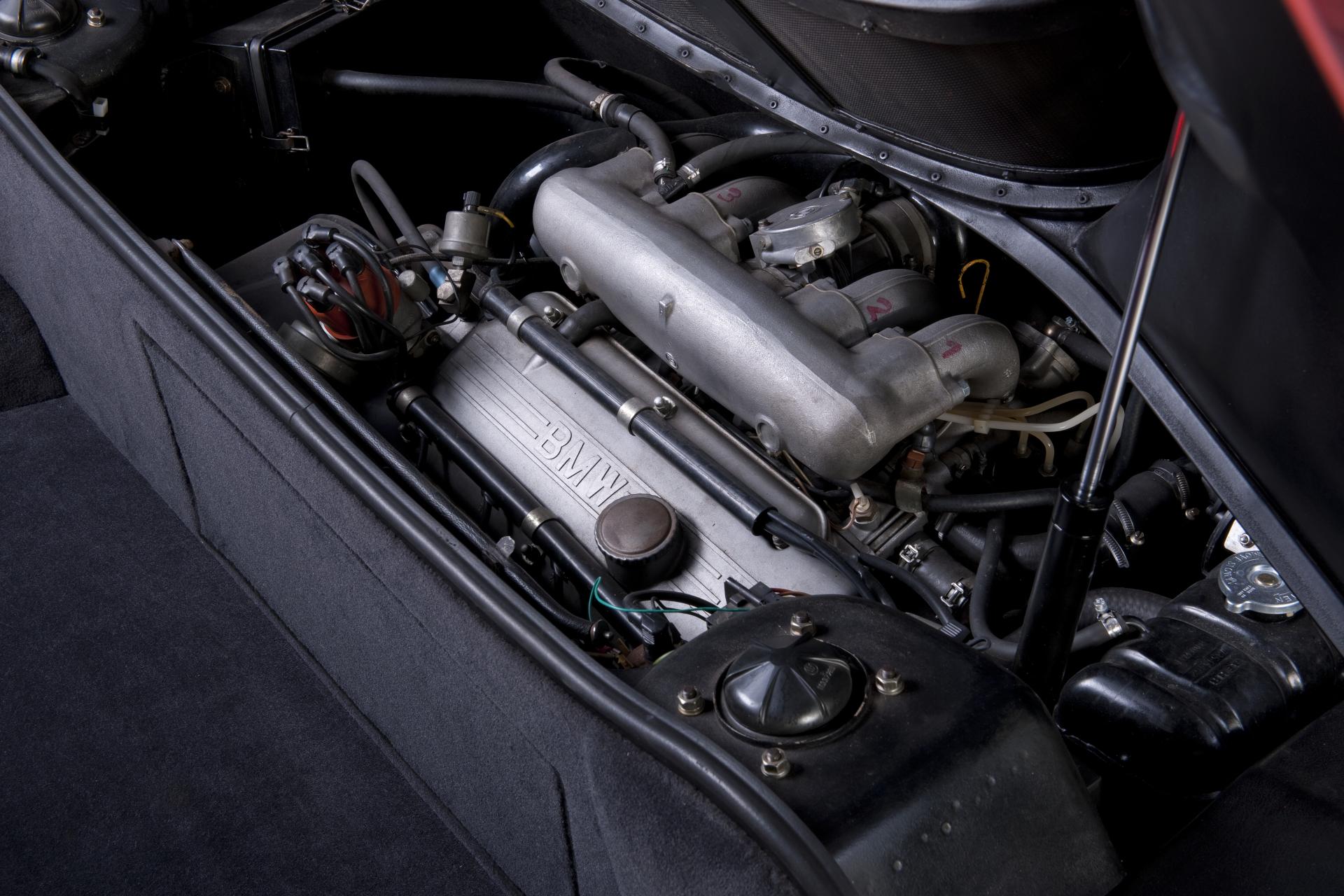 In detuned form, the blown four cylinder engine entered production in the 2002 Turbo, which was built in small numbers in 1973 and 1974. 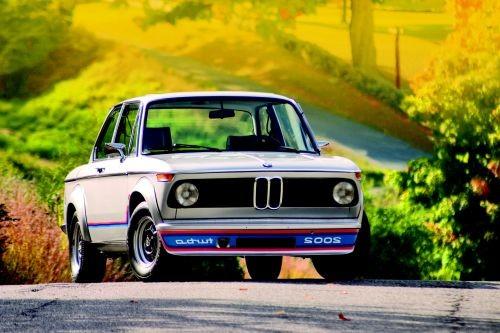 To top it all off BMW had the Turbo Concept painted in a highly unusual two-tone paint scheme, possibly the emphasize the collision friendly bumpers. Paul Bracq’s design received universal acclaim and was named the ‘Concept Car of the Year’ by the Revue Automobile Suisse. A second, non running, example was built for motor show use in 1973, but it was not until 1978 that a ‘production version’ was announced. This M1 was only very loosely based on the Turbo Concept design and excluded most of its revolutionary safety features. 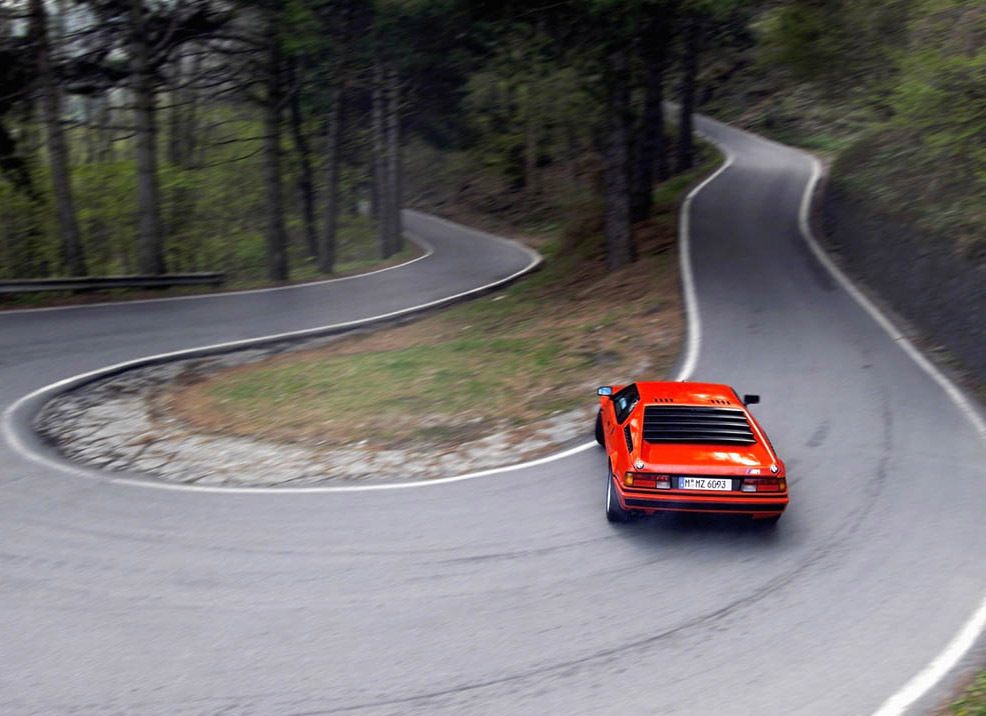 The iconic Turbo Concept has survived and is still in full running order, although it is quite difficult to get going. There is no mechanic or electric choke on the prototype engine, so it has to be fully heated before it can be driven. With its front mounted radiator and long waterlines that can take well over 15 minutes. A further problem is that the engine has no silencers, so the warming up process will get the attention of much of the neighborhood. Not surprisingly, the car is only driven very rarely.

Nevertheless, its low, flat design also set the tone for many future BMWs while it was also the direct template of the M1. 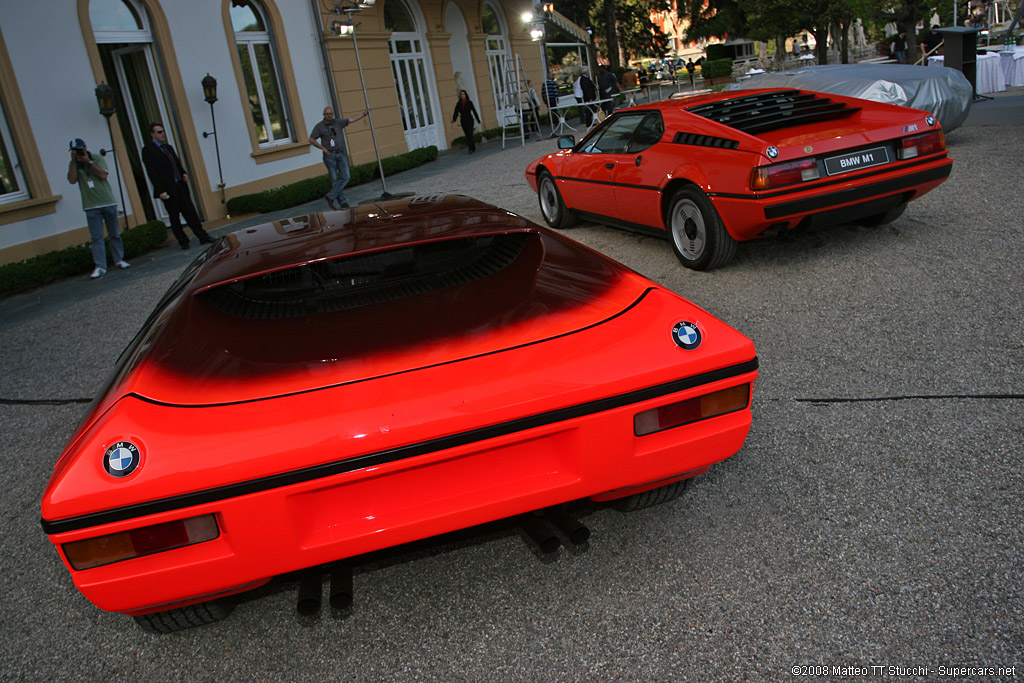 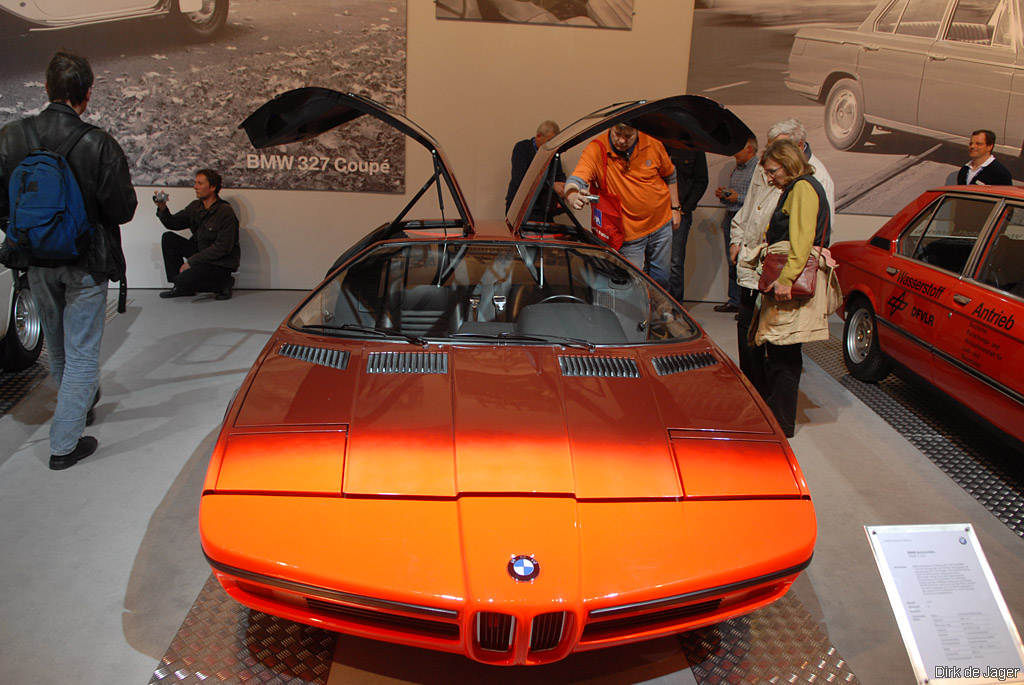 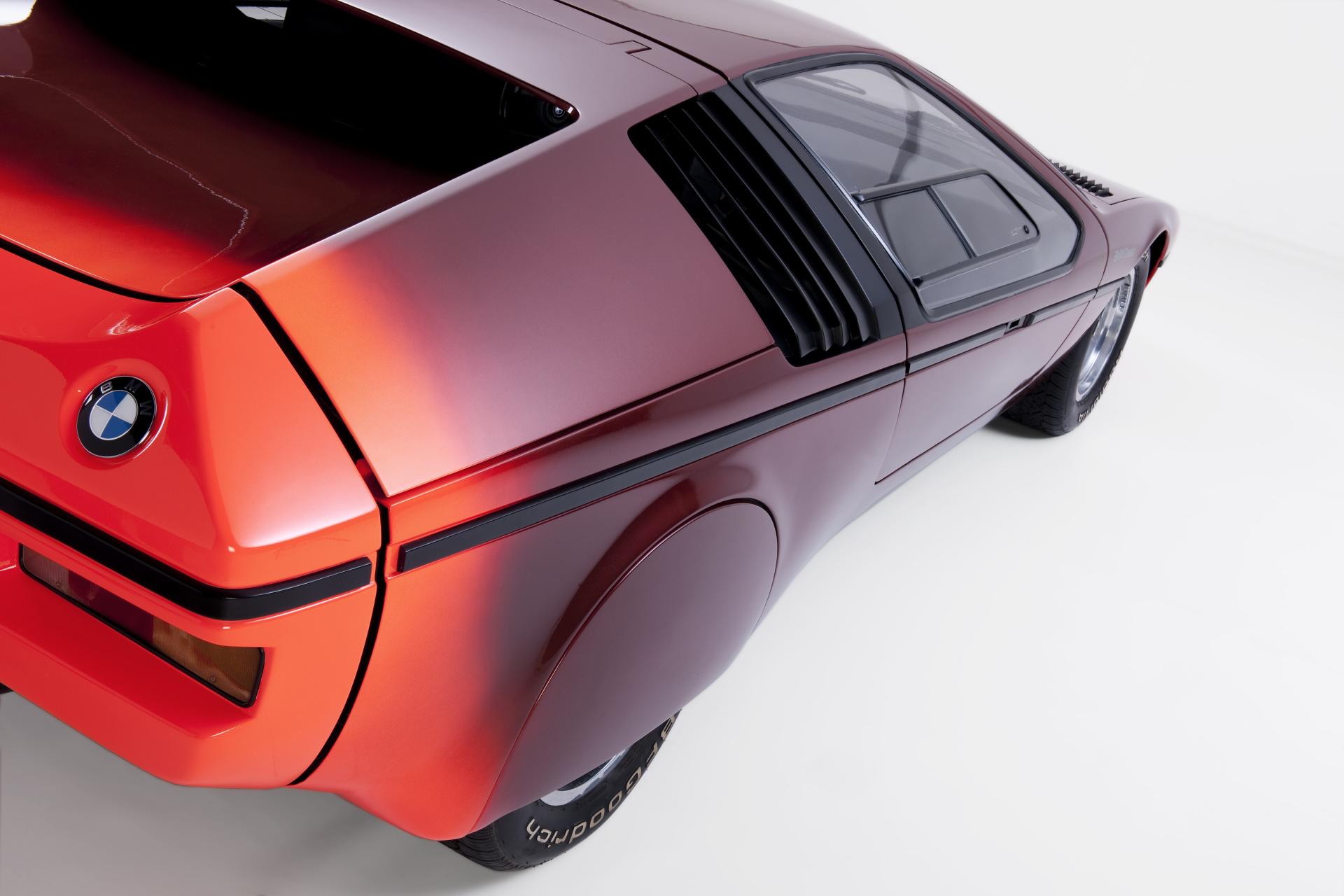 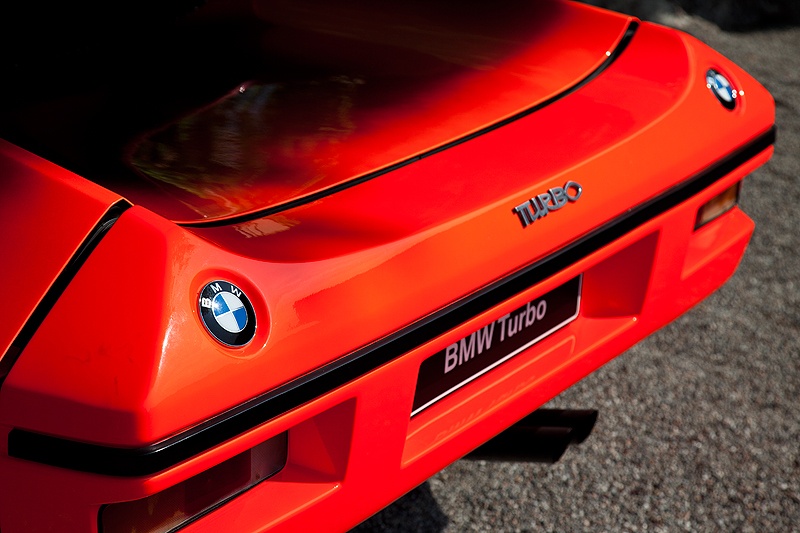 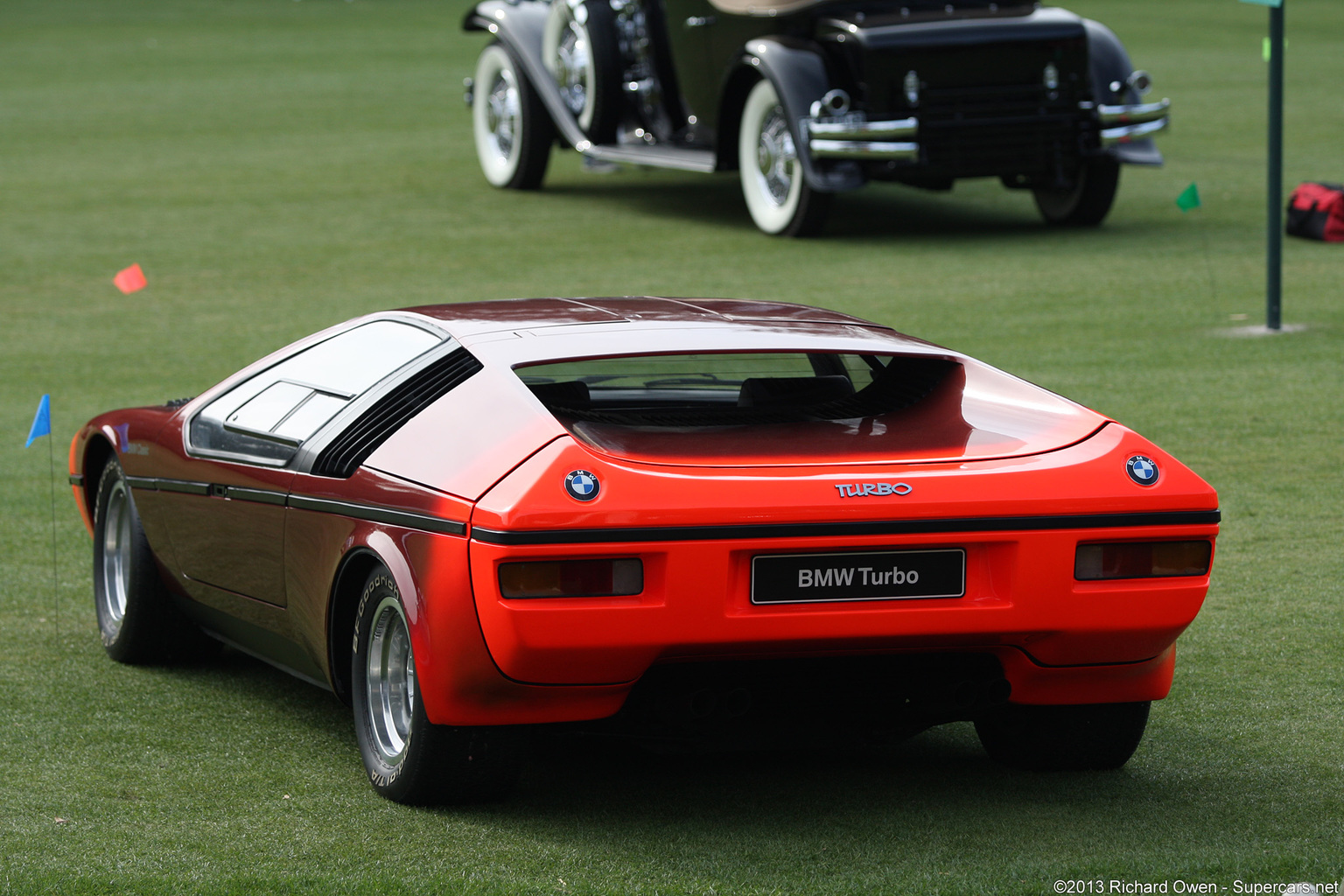 Bracq then went on to create icons with the BMW E12, E21, E23 and E24. It would be safe to say, without Paul Bracq, the modern BMW would be very different than it is today. We thank you for your efforts and truly appreciate the time, effort, and all of the artwork you have made!