Stumbling around the 1Addicts forum, I happened upon a thread proposing a BMW drive to the top of Pikes Peak. This sounded interesting and all, especially since I hadn’t ever driven to the top of Pikes Peak myself. For those of you who aren’t familiar, Pikes Peak is one of 54 Colorado mountains above 14,000 feet (14er’s). The mountain is named after the explorer Zebulon Pike and is unique because it is visible from over 100 miles away . I lived in Colorado my whole life, only a 60 mile jaunt from the base of the mountain, but I had only ridden to the top once that I can remember. My 4 years in college took place in Colorado Springs, the very base of this iconic mountain, yet I didn’t make it to the top in all those years. The majestic snow-covered peak reminded me every day how small I was and how beautiful the earth is. It was an amazing sight to wake up to every day, and one of the reasons I enjoyed living in Colorado Springs. 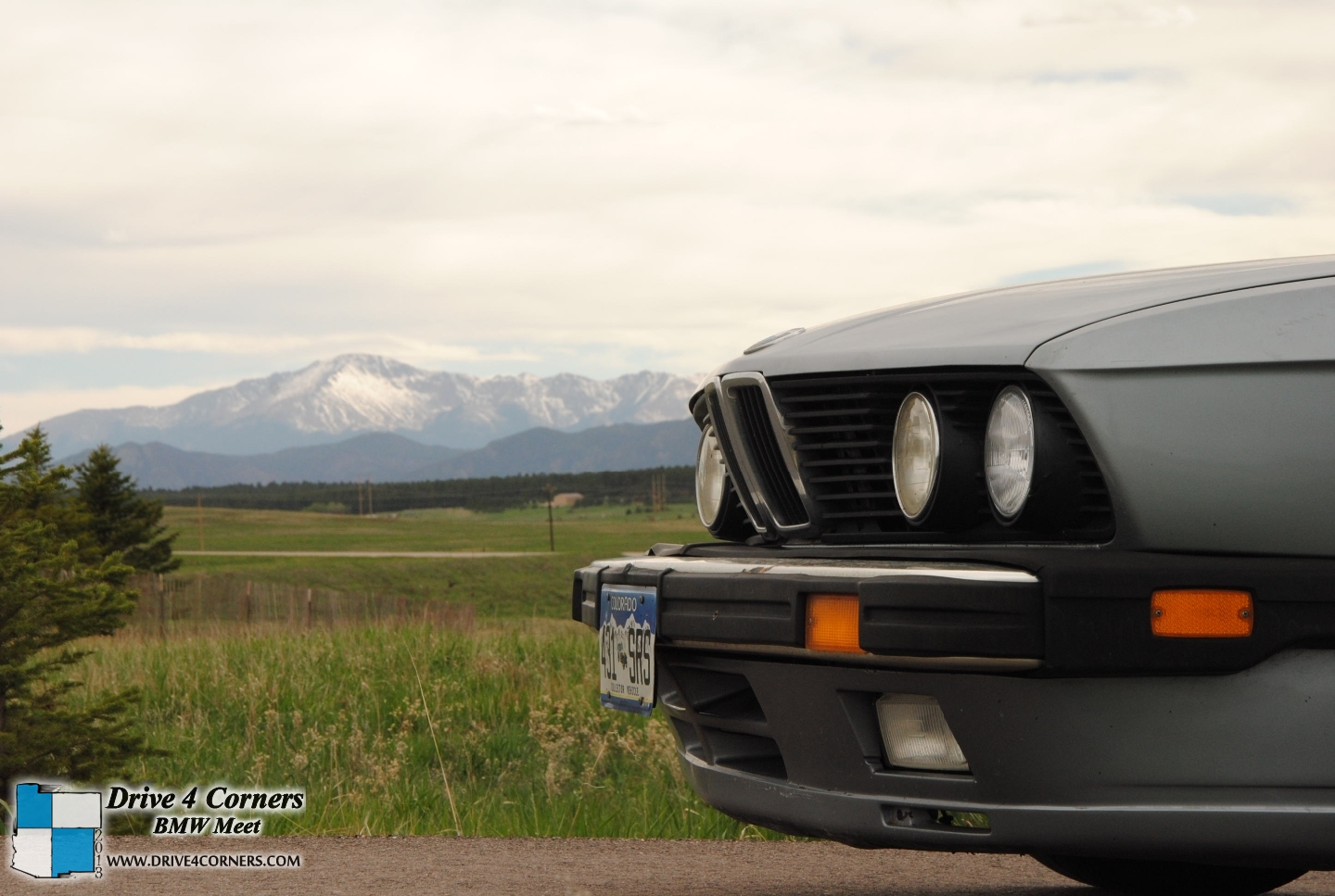 Only some of the famous Colorado 14er’s are accessible by car. “America’s Mountain” (Pikes Peak) is one of them. I knew from past backpacking and hiking experiences that the view from that altitude is always worth the trip. I had attempted to drive to the top at one point, but ironically, high winds meant that the peak was closed and my trip would go no further than Glen Cove (11,000 feet). Glen Cove would normally serve as a safety location where brake temperatures are checked for all vehicles. If deemed too hot, all the grannies who were riding their brakes on the way down have to park and wait for their brakes to cool. For me, the turnaround meant that the ascent to the peak would have to wait for another day. 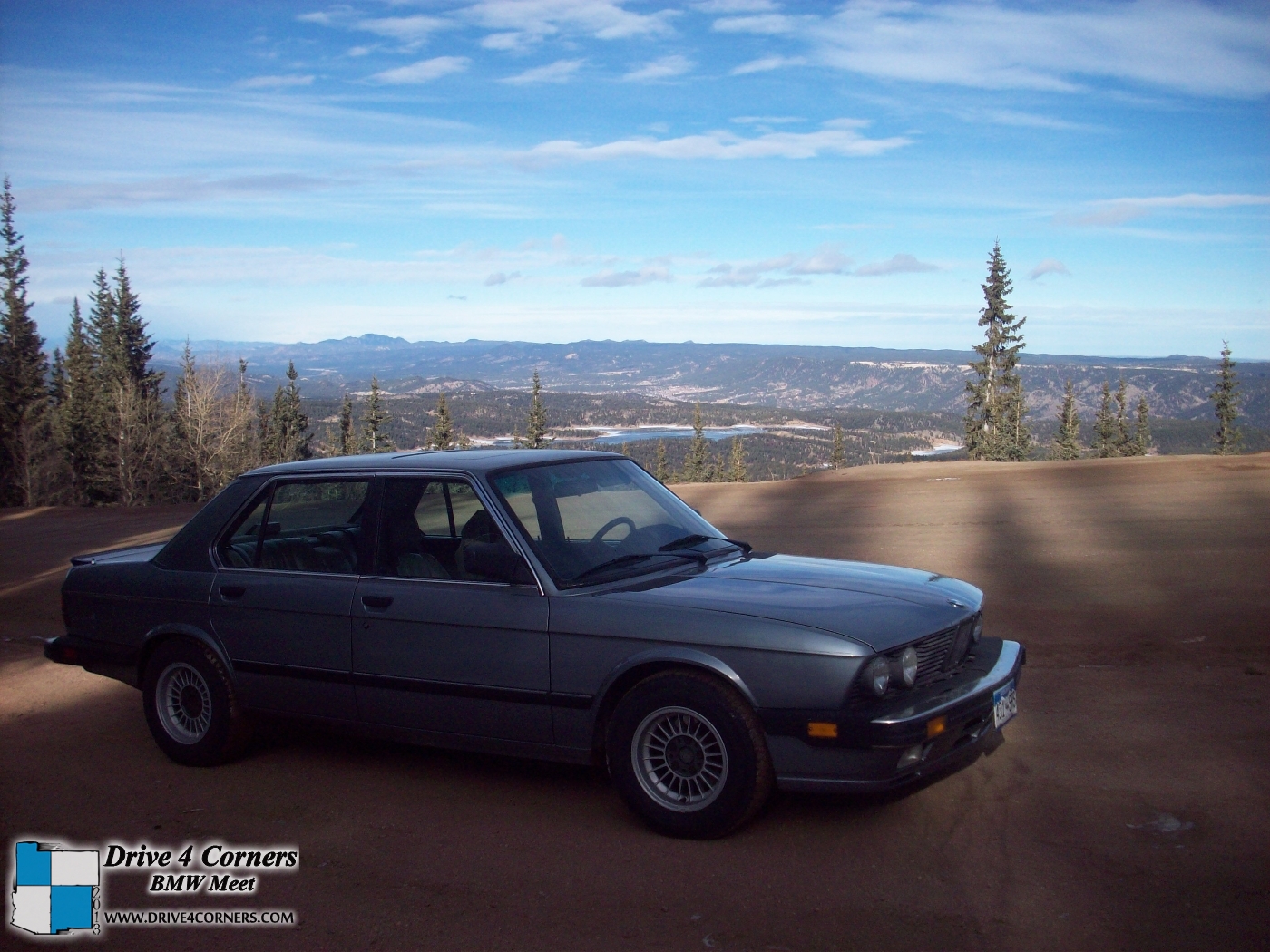 Years later, it seemed like a “Pikes Peak Run” would be an interesting drive to participate in, knowingly accepting that the ascent up the mountain (and descent) would not be as spirited as my typical canyon runs. 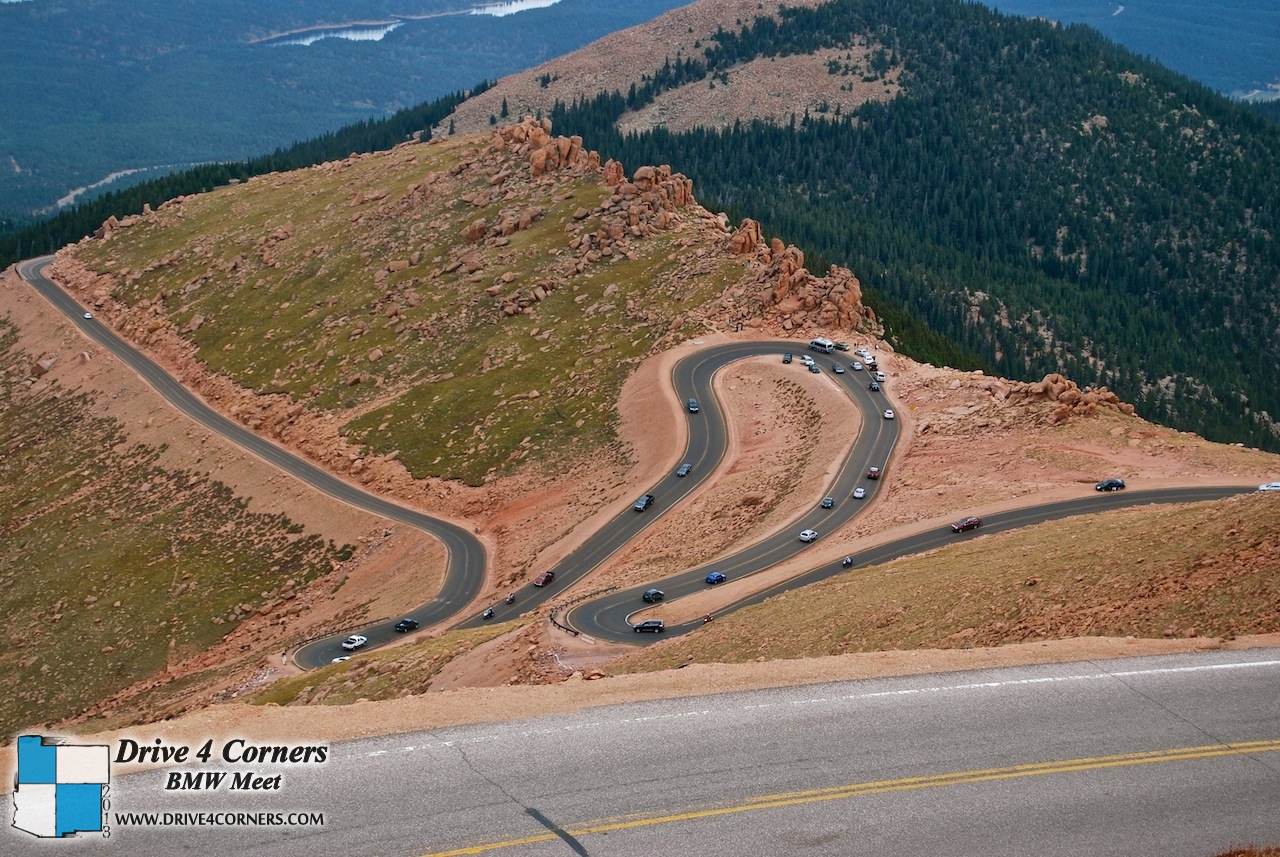 Pikes Peak is also unique for another reason as the mountain is closed off yearly for “The Race To The Clouds,” a grueling and dangerous automotive race to the very top of the mountain. As evidenced above, the route is perfect for those whole love twisties, and aren’t afraid of plummeting down 1000 feet in the event of a mistake. In fact, the annual Race to the Clouds actually boasts itself as the one of the oldest motoring events in the US, second only to the Indy 500 by a mere 5 years. 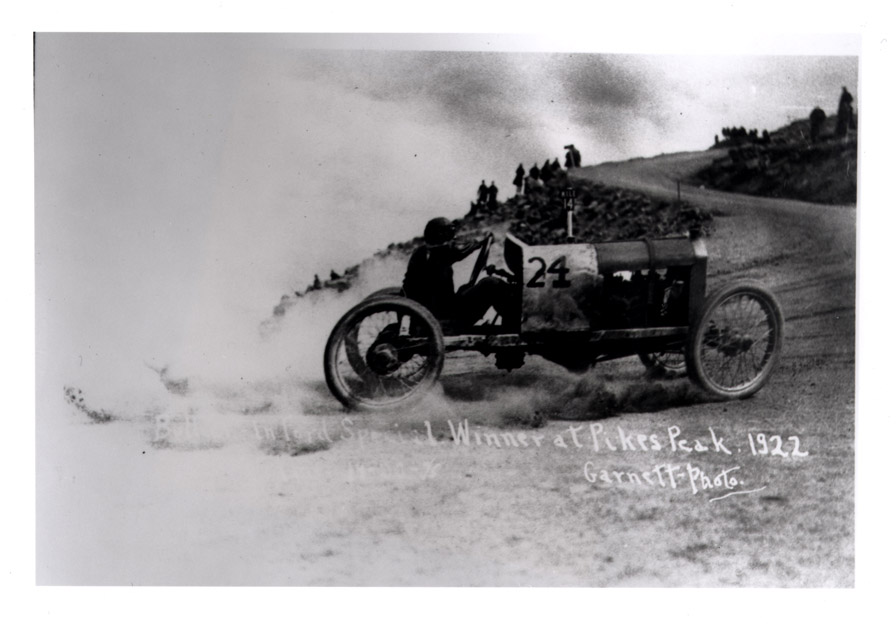 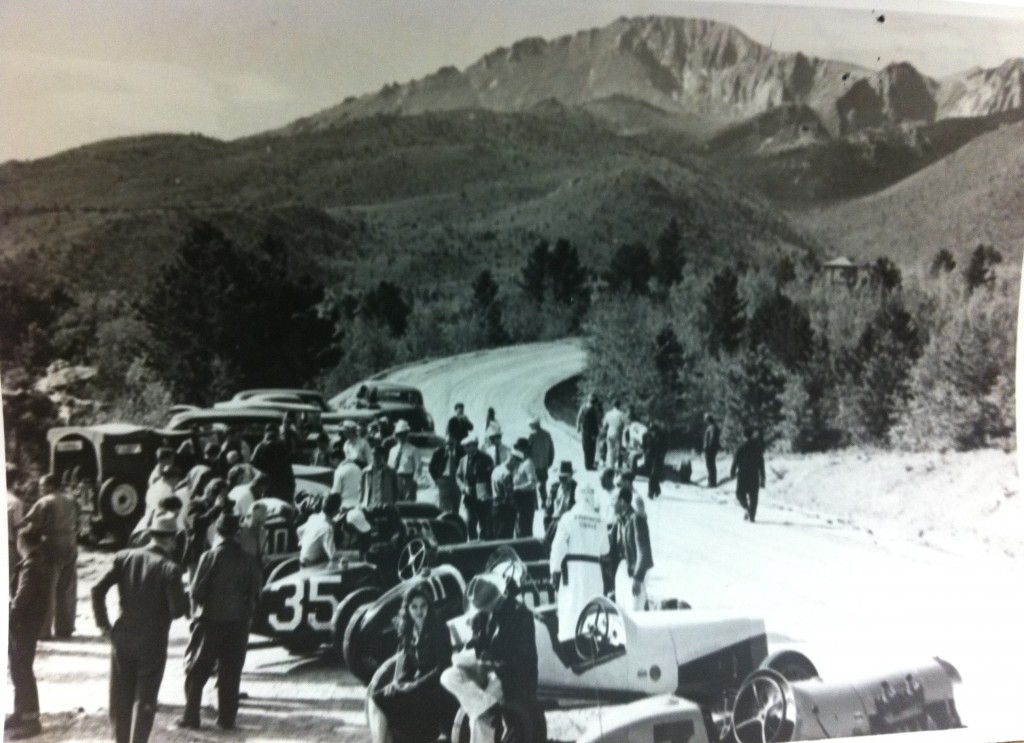 The hill climb sets itself apart from other auto racing events mainly due to the lack of safety barriers and guard rails. Enigmatic drivers matched with dirt roads and top of line line race cars created an exciting yet dangerous event. A video released in 1990 by Jean Louis Mourey highlights the racing efforts of Ari Vatanen 25 years ago (Vatanen filmed in ’88, Robby Unser in ’89). See below how the Puegot 405 T16 was an all wheel drive, all wheel steering, turbocharged monster ascending the peak.

Those who have been around long enough say that it’s not really a race against the other drivers, but rather a race against the mountain itself. The switchbacks and sharp drops mean a single mistake can do more than just end your race day. With 156 turns to remember, the drivers ought to be sure they know the upcoming corners when pushing the envelope. In years past, challengers had to cope with the changing road conditions of both pavement and dirt. The competing cars were typically of rally fashion as more than half of the course was dirt. The dirt road meant more sliding, and precise control was imperative. It truly was a challenging endeavor with the dirt covered highway. 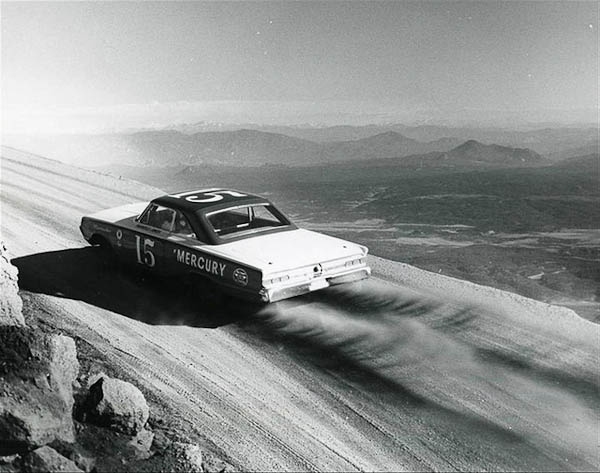 In addition to those challenges, weather conditions also factor in greatly. High winds add an element of uncertainty to each corner, and numerous times, sleet or even snow has heightened the level of danger involved. Pushing the limits of adhesion while driving on a wet and slippery road surface make it glaringly obvious how Pikes Peak has claimed lives. 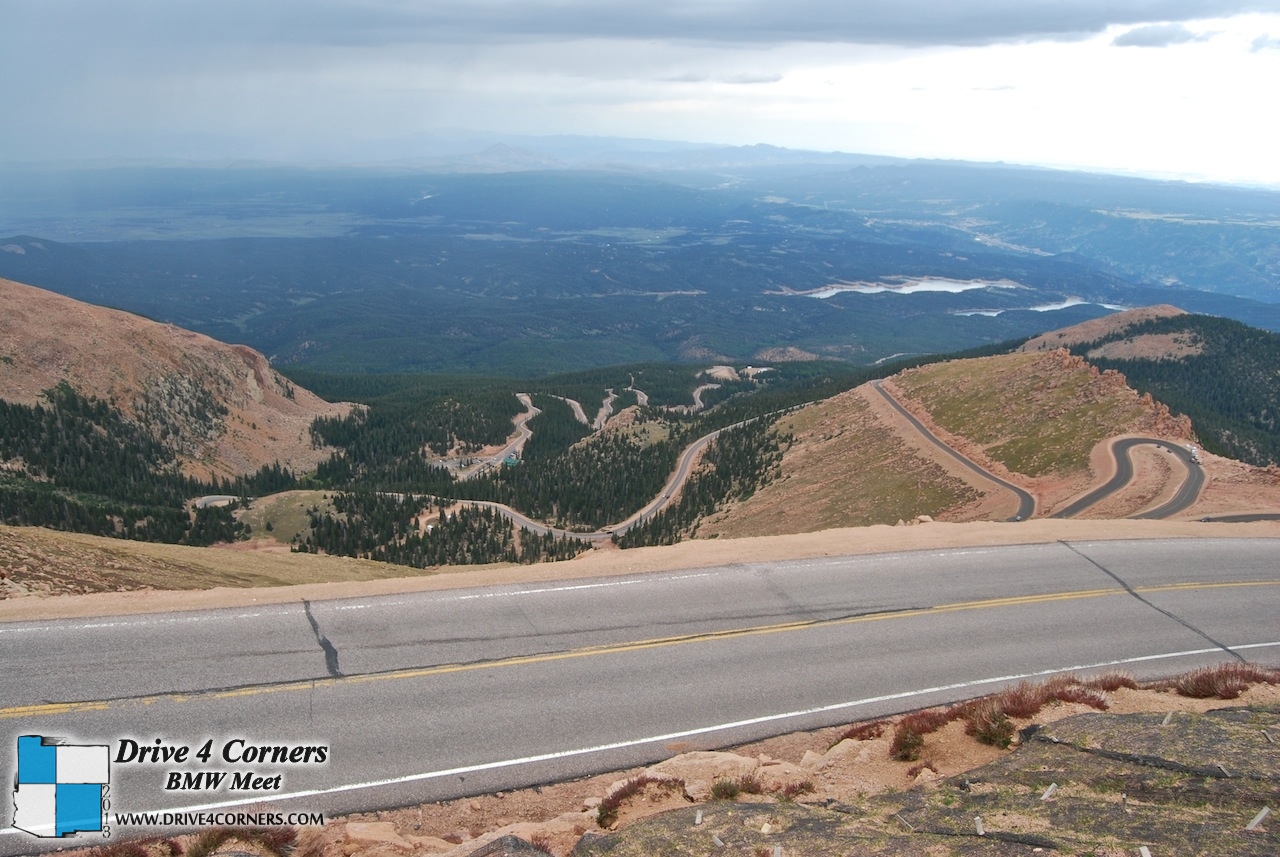 Bill Caswell, the famous craigslist E30-rally driver (who also supplied some neat license plate frames at D4C 2013) wrote a nice article for Jalopnik explaining the dangers of the race.

Loads of drivers have escaped near-certain death on the treacherous course. For proof, just take a look at a few wrecks from last year (2012); Jeremy Foley’s death-defying crash or Paul Dallenbach’s throttle problem just after the start line (on his 1400hp Banks engine no less! – Onboard Cam). Amazingly both walked away, and there were no injuries to the crowd.

Other readily accessible videos are Bobby Regester from 1993, or even Gary Lee Kanawyer as he was attempting to beat the time of the now infamous “Monster” Tajima. Yet, the mountain had other plans. The names of the turns foreshadow what lies ahead for each driver; Double Cut, Ragged Edge, and Gravel Pit seem harmless enough, but watch out for the likes of Devil’s Playground and Bottomless Pit, which are appropriately named!

2013 brought some changes, namely a fully paved road. The 20 kilometer (~12.5mi) race course was no longer a mixed dirt/asphalt route. This meant one thing, faster cars. In fact, the existing course record was smashed by over 90 seconds. More astonishing is that the course record had only improved about 14 seconds over the previous 18 years! 2013 was the return of Puegot to Pikes Peak since Unser and Vatanen drove back in 1989 405 T16 (as seen 25 years prior in the Climb Dance video above). Sebastion Loeb cruised his Peugot 208 T16 to victory, likely setting a trend of faster road cars for the upcoming years. Loeb is a World Rally Champion from 2004-2012. 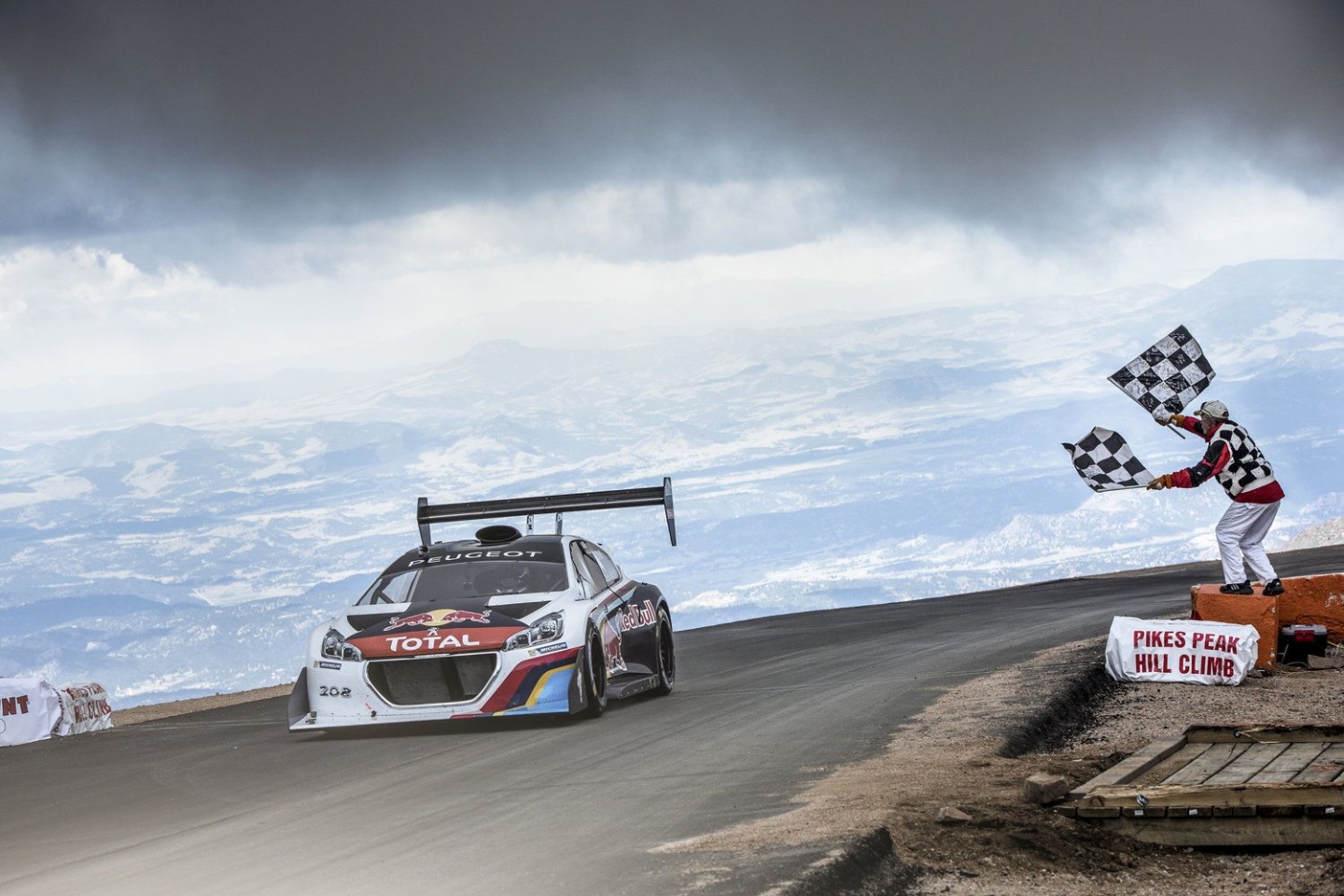 Don’t think that this means the hill climb is no longer dangerous, because it is. More horsepower on the asphalt mean that each driver will be edging closer and closer to the threshold of adhesion. Faster speeds suggest less room for error, both in corner recognition and reaction time. Instinct may mean the difference between success or costly miscalculation. Cars slide on pavement as evidenced by the electric vehicle driven by Janis Horeliks. Or just take a look at this handy Porsche 914 trying to make up some time at the bottom of the course. As one of the commenters puts it; “Rock beats paper.” 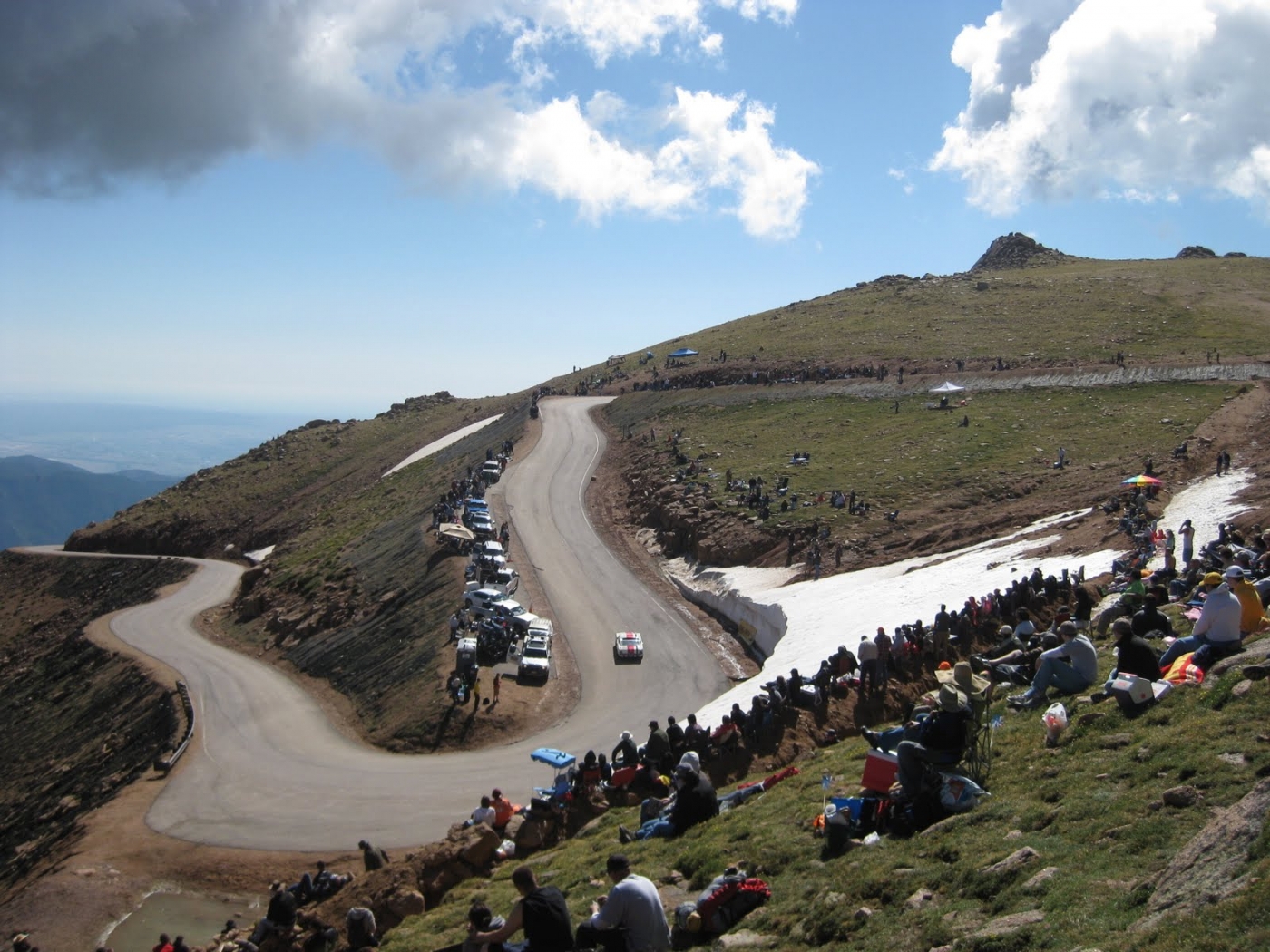 It is definitely a unique event, and one of the only remaining auto races that you can get as close to the action as the Group B Rally races of the past. Look no further than the image below, or the Dallenbach crash video above. 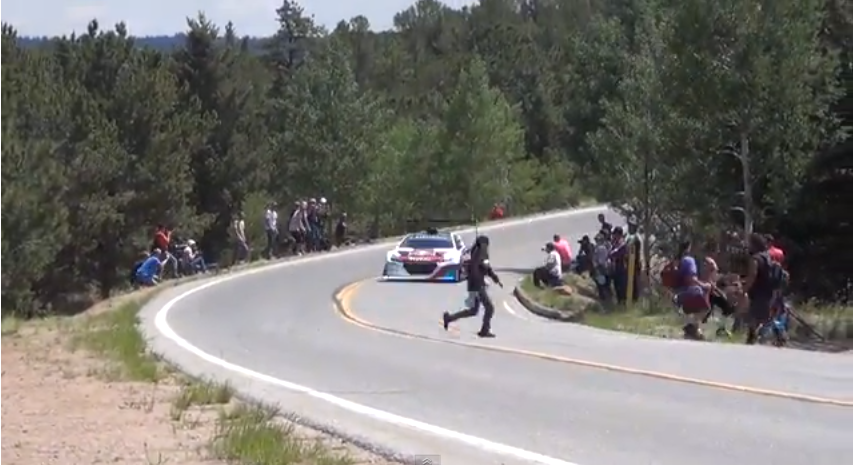 Needless to say, I have wanted to make it to Pikes Peak International Hill Climb (PPIHC) for a few years now. In the mean time, a steady, controlled drive to the peak would do for me. Starting from Red Rocks Amphitheater, we caravaned past the Colorado Hayman Burn Area with the Pikes Peak summit as our final destination. 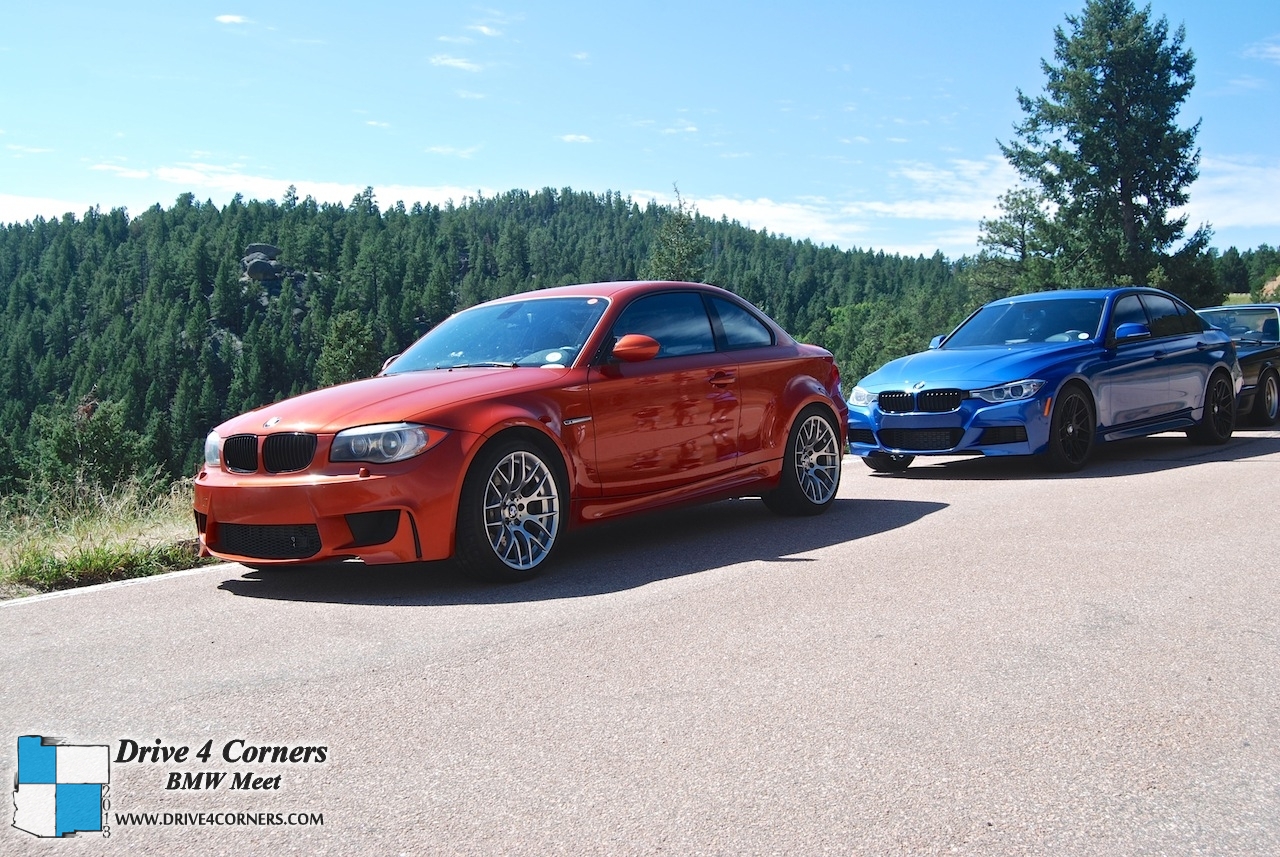 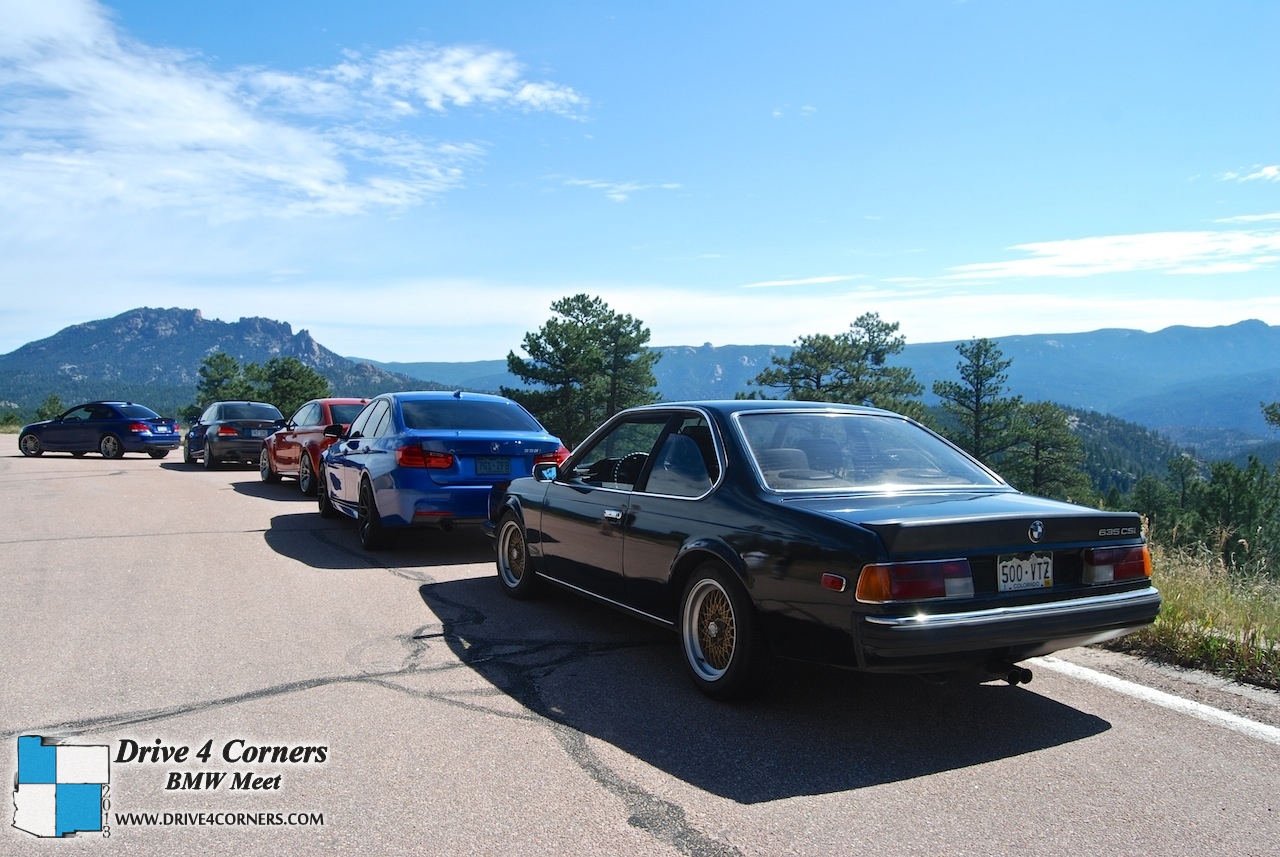 After a break in our journey for, we headed to the Pikes Peak Highway.  The trip to the top took over 30 minutes due to the large amount of traffic as we reached tree line. Unfortunately along the ascent, there were no chances to snap photos while driving. With steep drop offs and sharp corners, all of us had to be careful not to be distracted by the ominous rock figures in our peripheral vision. 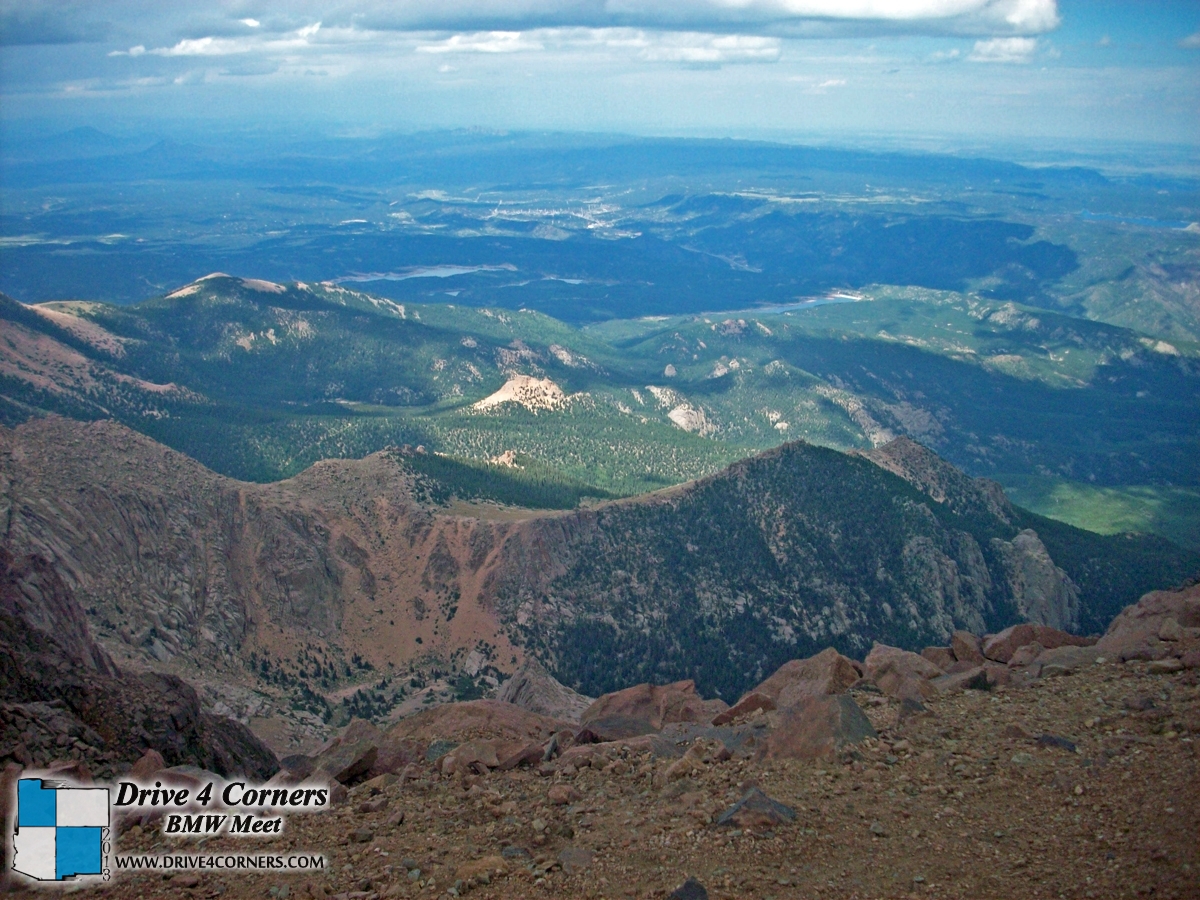 The top was a great location to admire the view of Colorado Springs and eastern Colorado. For us automotive enthusiasts, that meant photo opportunity! 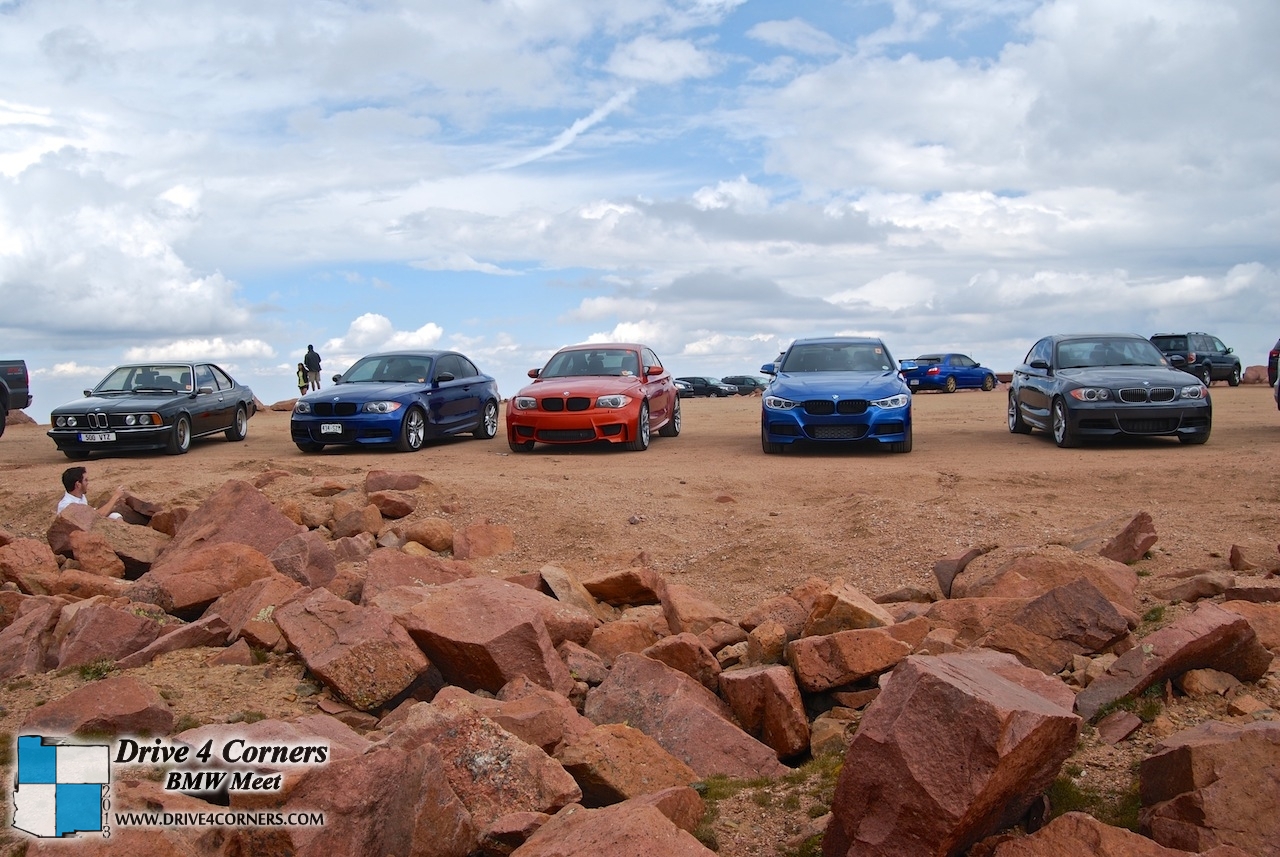 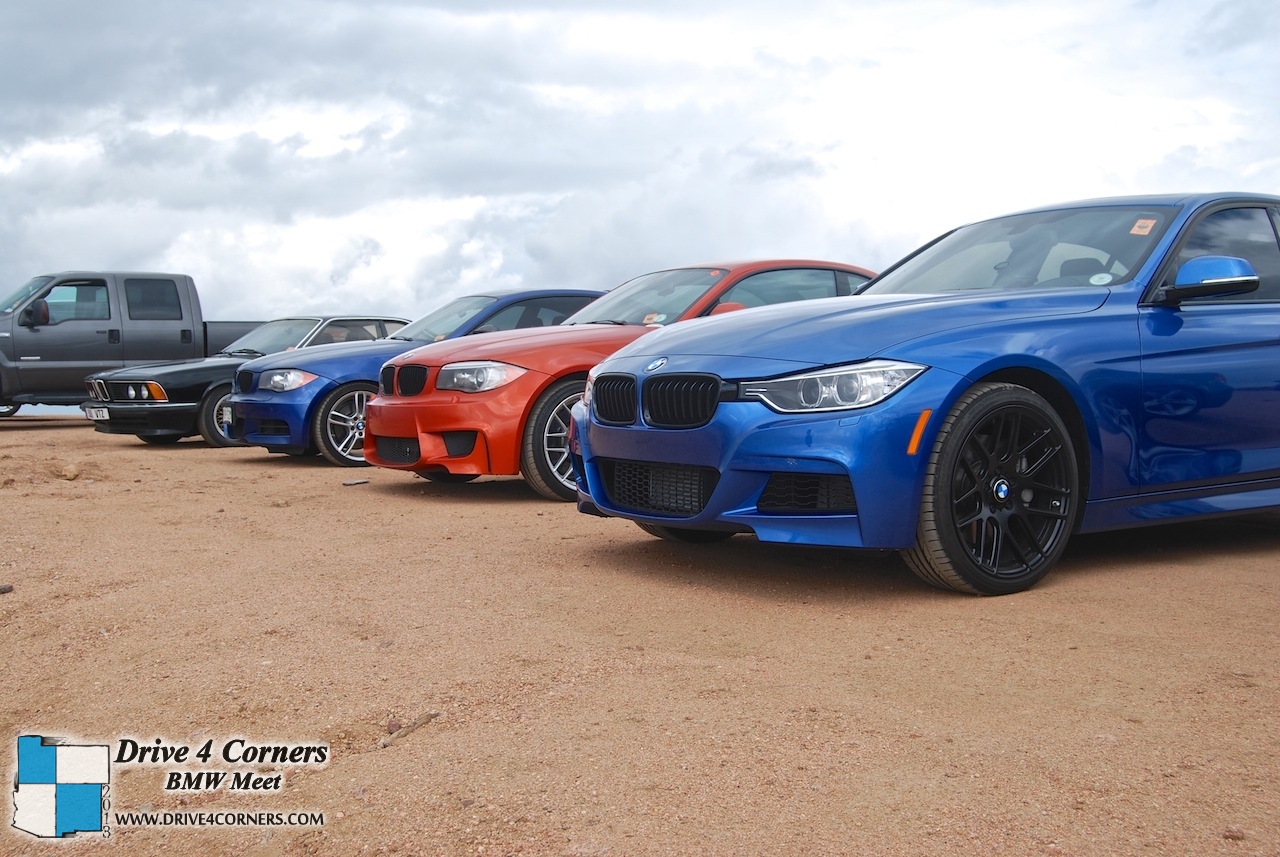 On the way down the mountain, our group got stuck in the exaggerated downhill pace of a particular mustang, however, we found another great photo opportunity to distance ourselves from the slug. This location is just below “Devil’s Playground.” 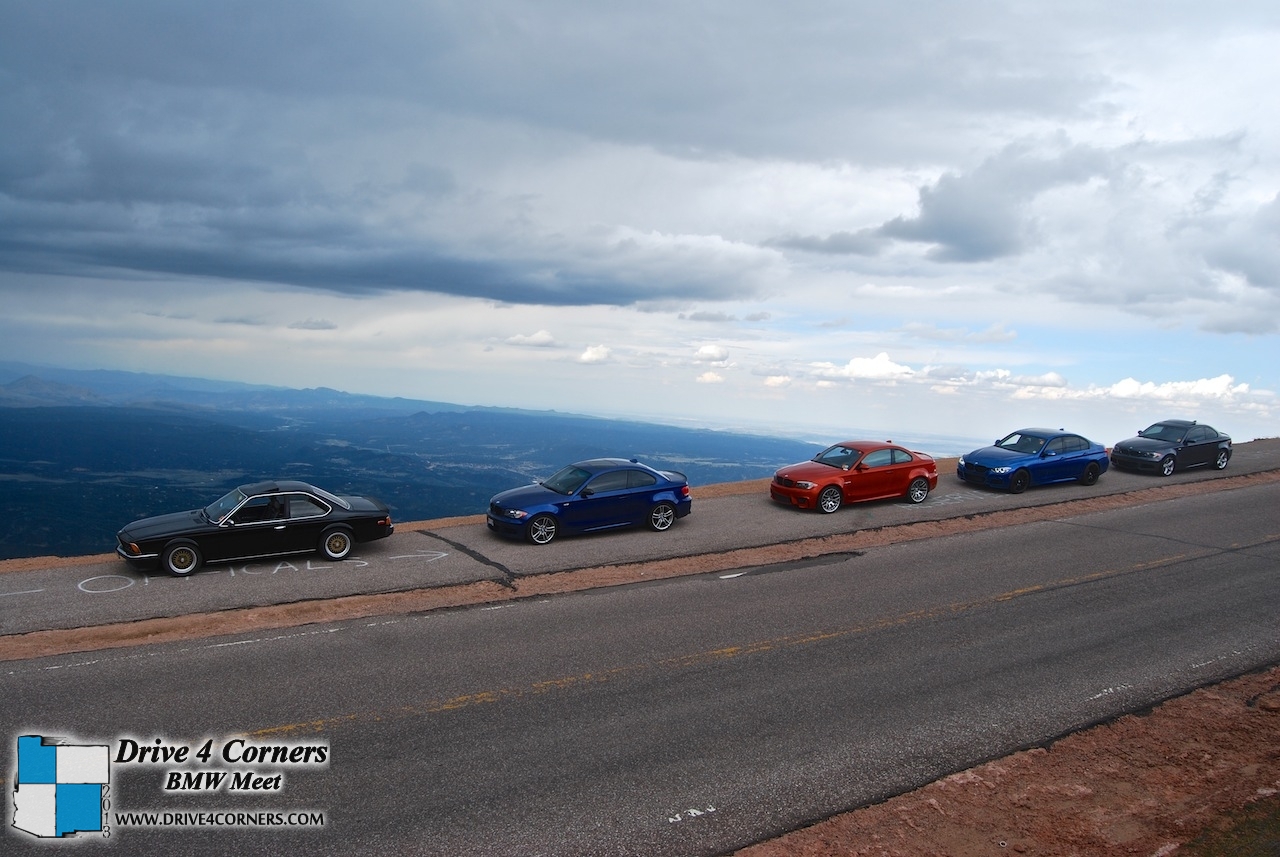 The 1M that joined us looked amazing in the unique Valencia Orange. 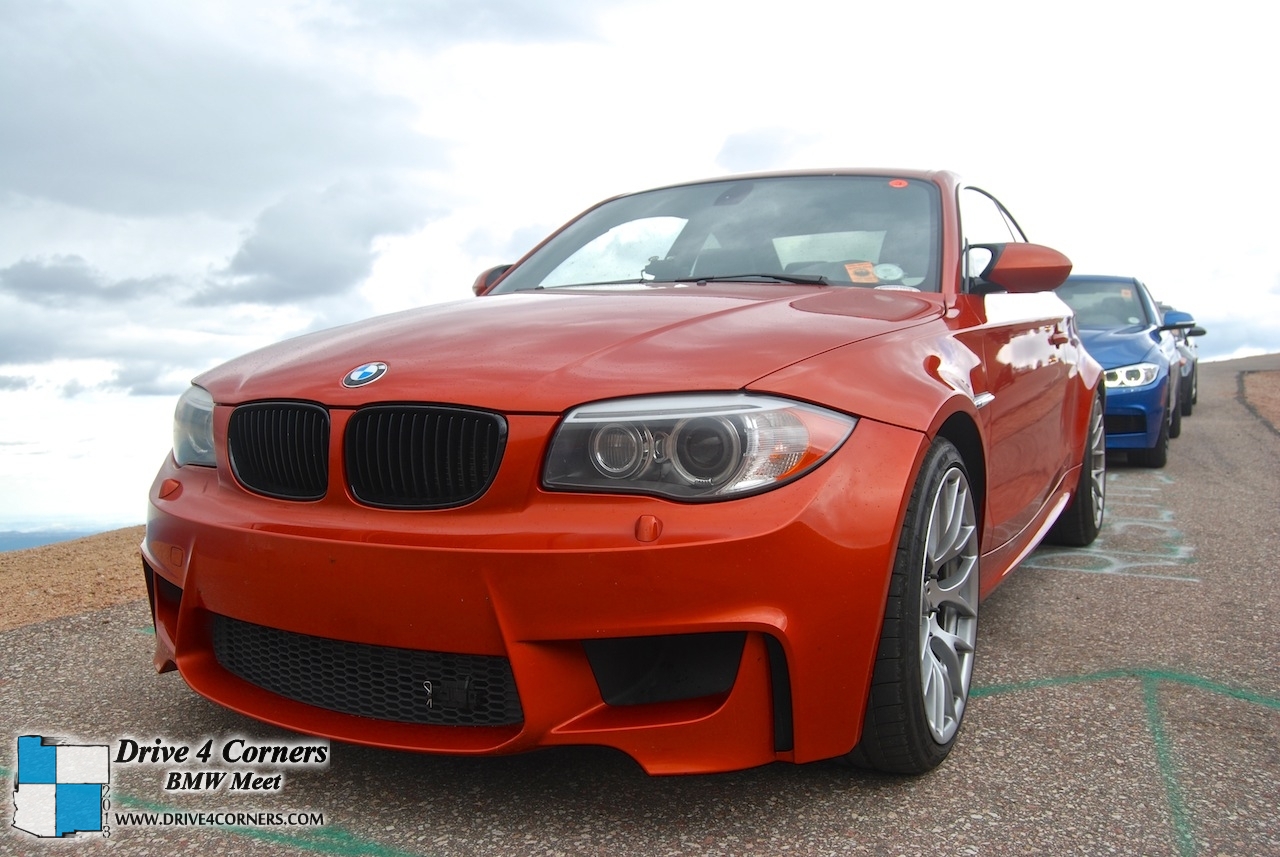 A new F10 3 series also proved that BMW has improved upon the Bangle-era of BMW’s, with a great looking snout and crisp, modern styling. Estoril Blue is still a timeless color, over 15 years after its initial appearance. 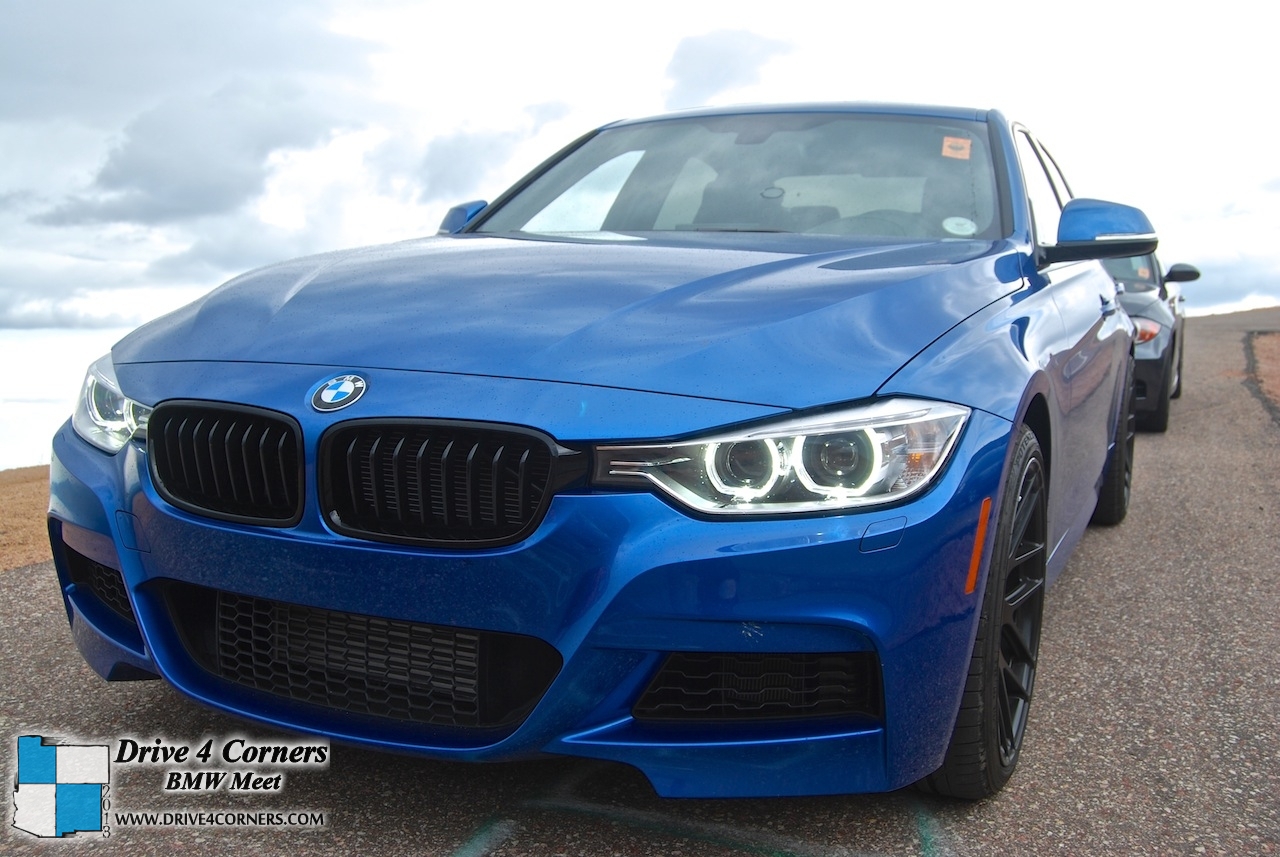 The 135i’s in attendance had no problem getting to the top, the twin turbo N54 engine pumping out 300 horsepower and torque. Their aggressive lines have began to look sharper since their initial debut in 2004. 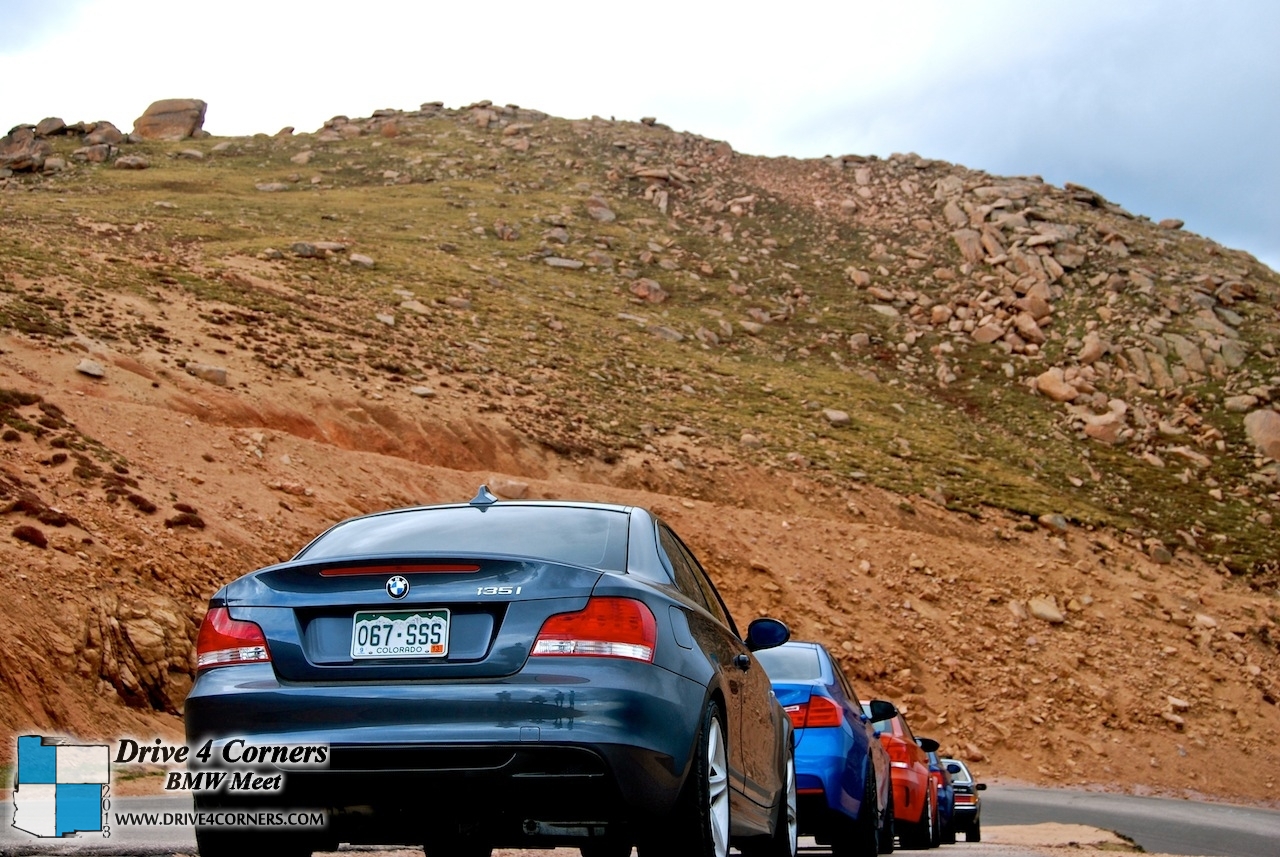 The oldest car of the bunch was the euro-spec 635CSi, which looked like the awry ringleader of the group. The near 30 years of BMW styling disparity is quite evident. Not to mention the almost prehistoric  air flow controlled Bosch fuel injection method. 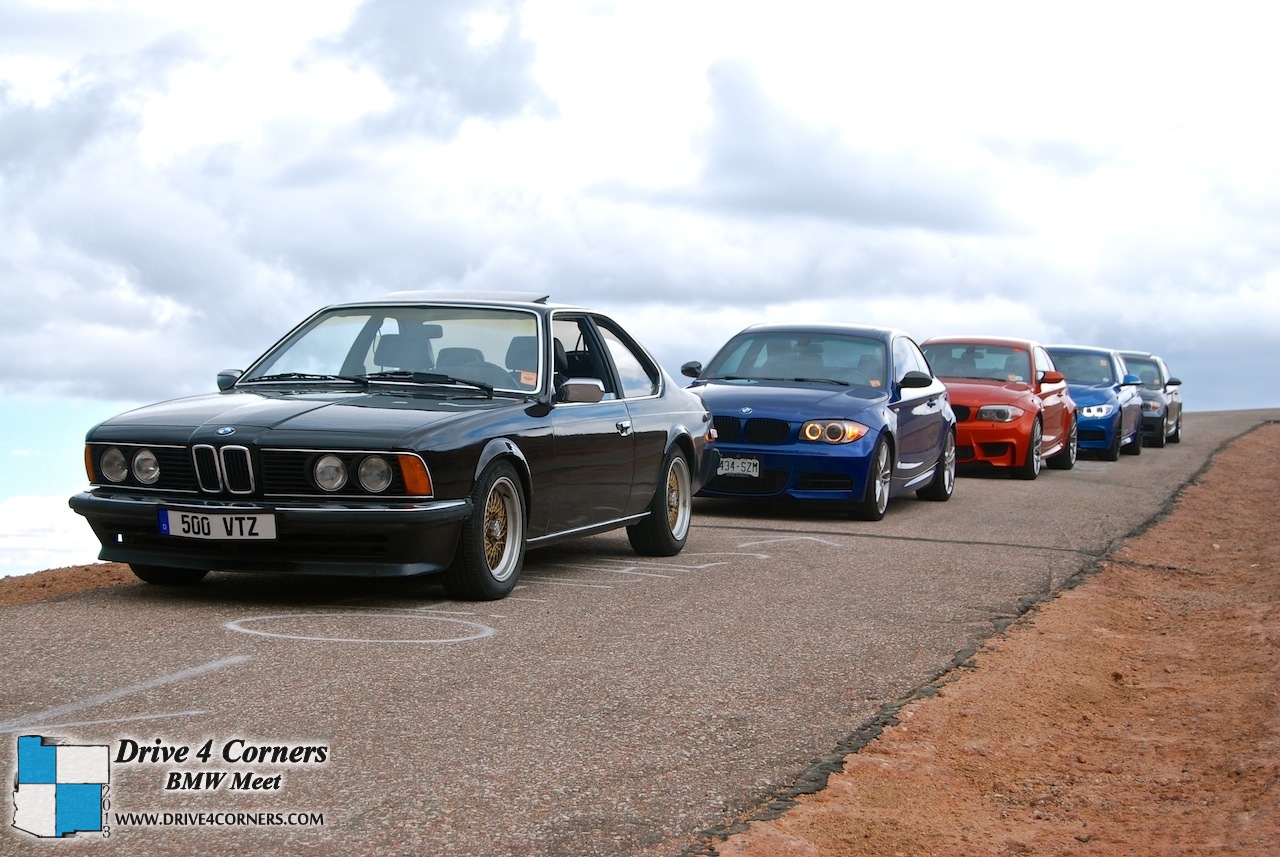 This photo location is another spot that really shows how unique of a road this truly is. Only a month later, and the rocks would have a coating of snow (seen in a picture above). 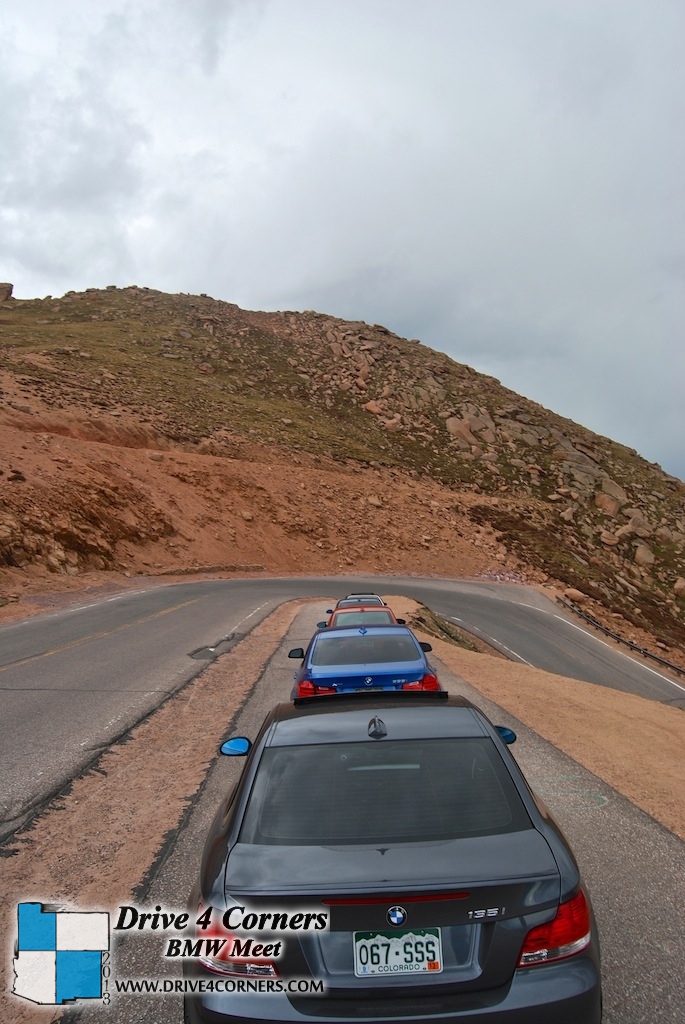 Hopefully this article gives you some history regarding the mountain itself and also the unique automotive community that connected to it. Maybe one day BMW will be convinced to bring a race car to the hill climb.

Here are some gratuitous photos of the BMW’s (plus a spooky optical illusion, if you can find it): 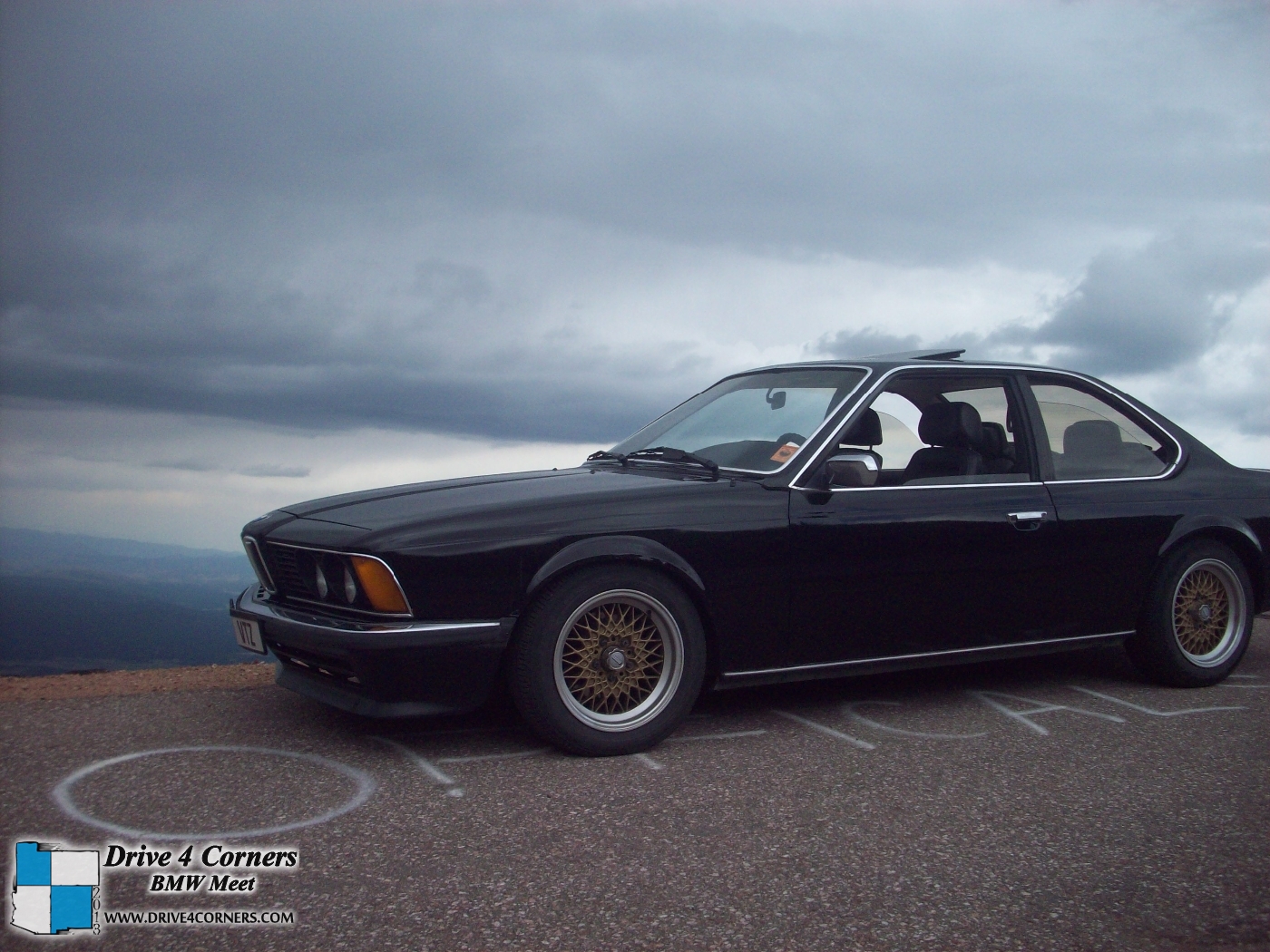 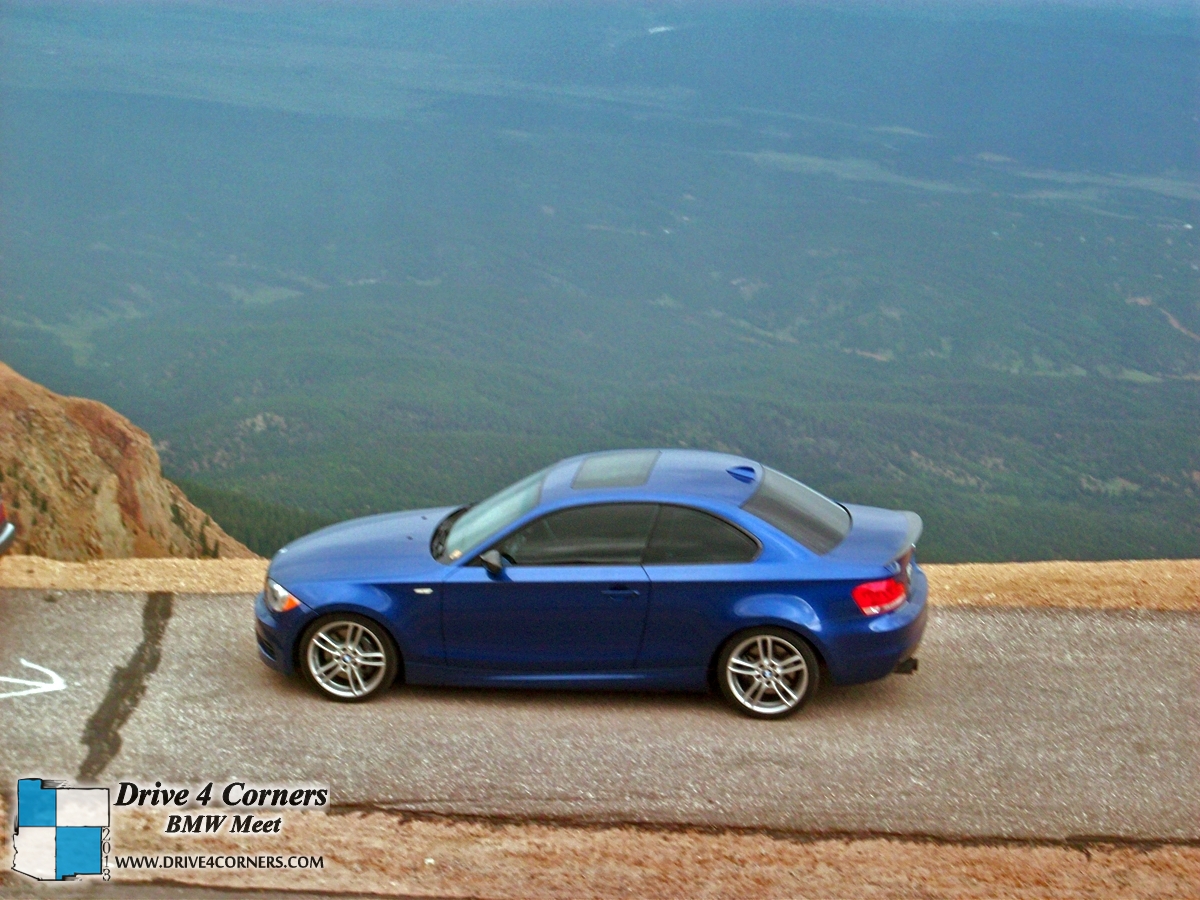 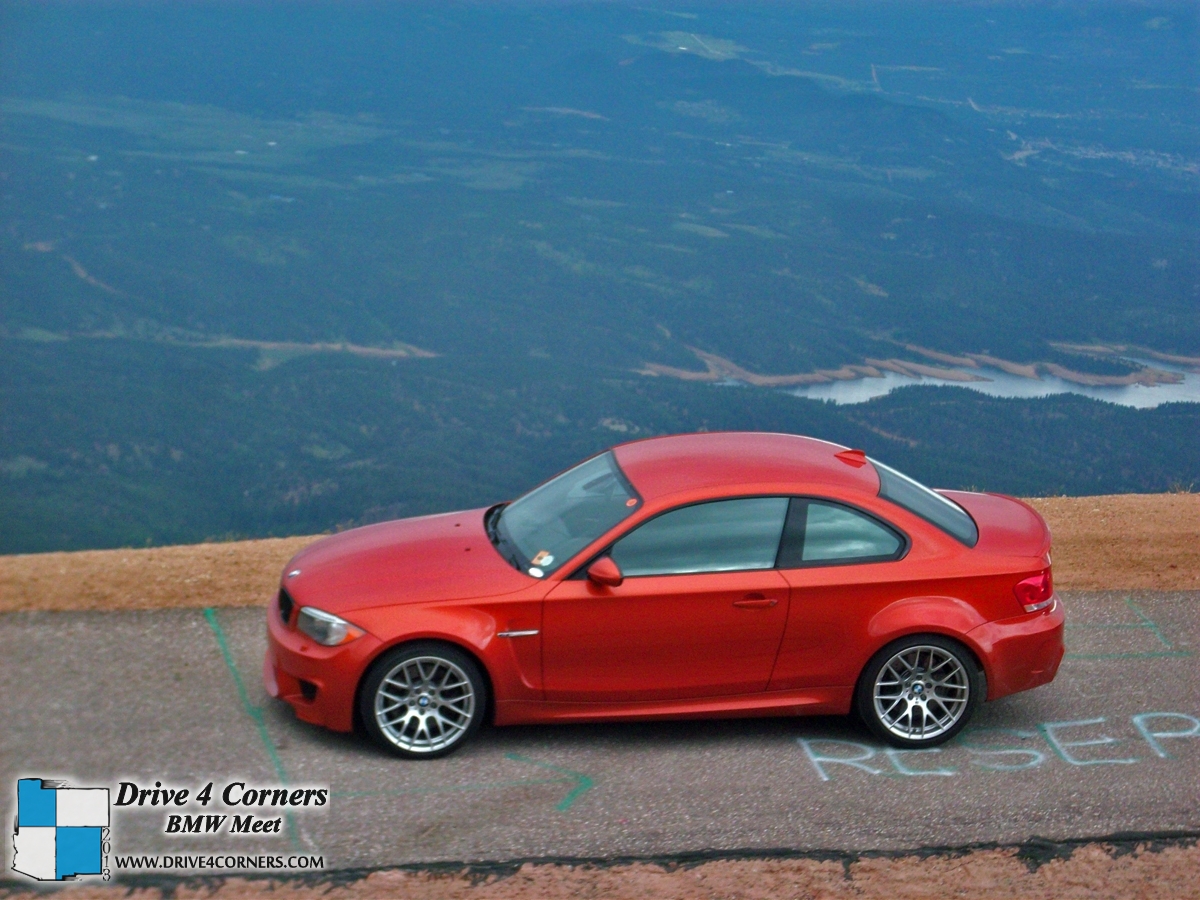 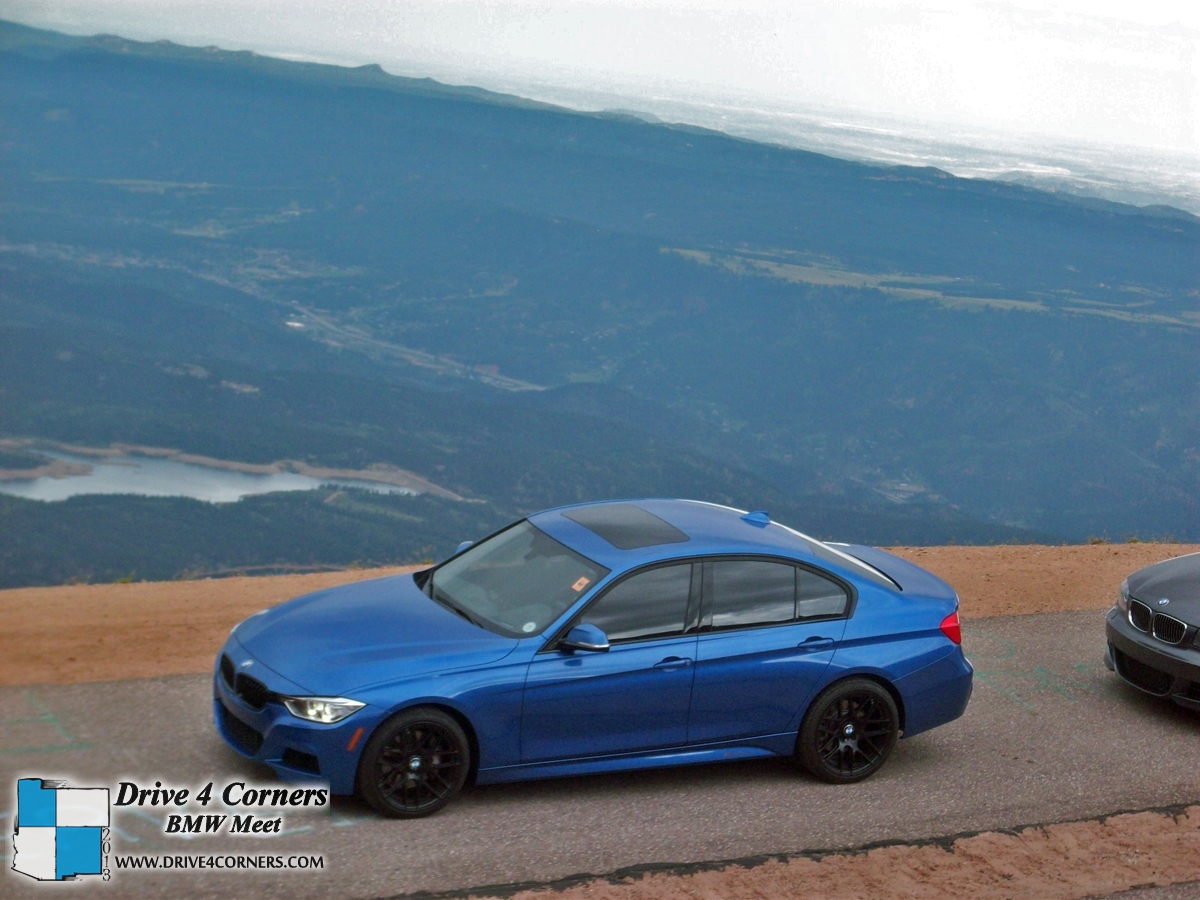 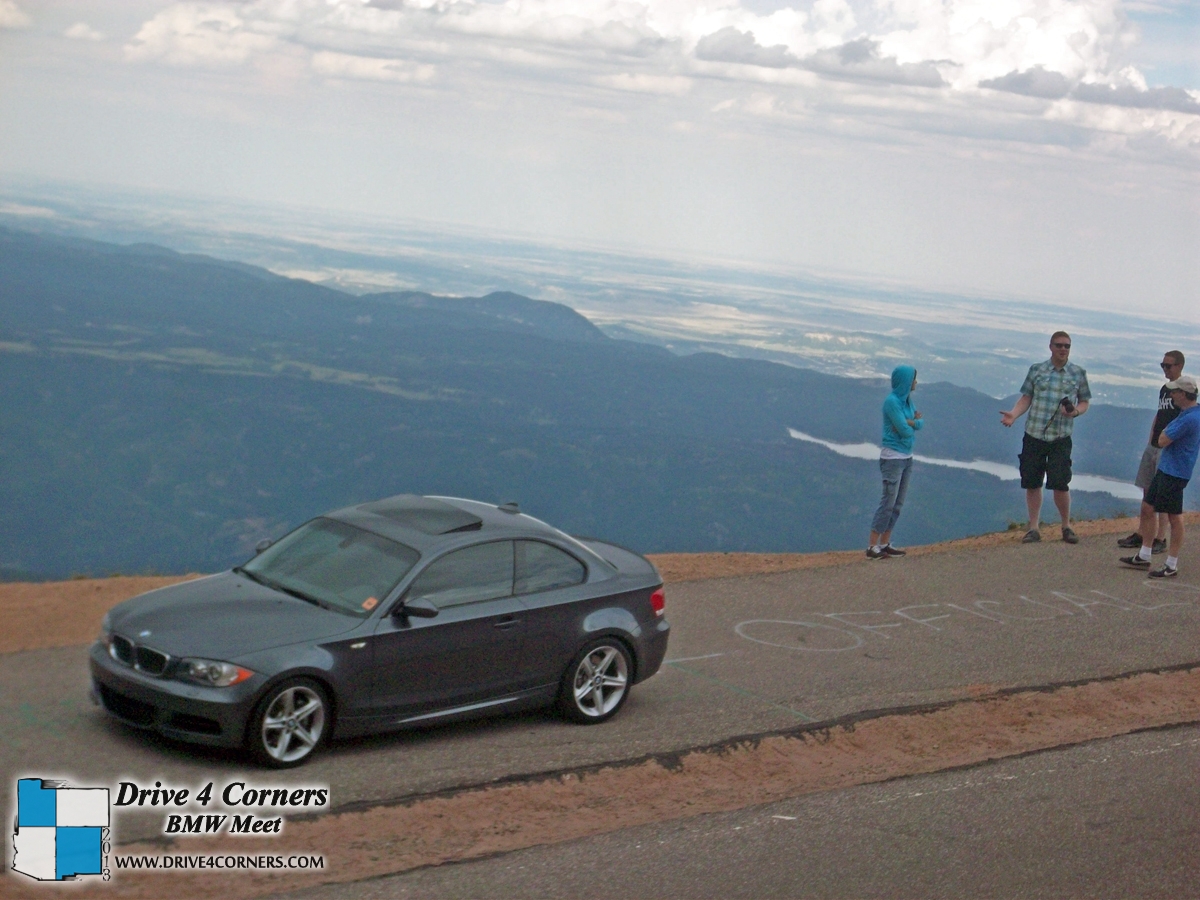