A concept car is a showcase of an automobile manufacturer’s imagination. It can be a glance toward the future and a peek inside the inner workings of a very private industry. A concept car allows wild ideas to be incorporated in the framework of vehicle without judgement, excuses, or apologies. Bold ideas and striking design are the objective and, if done correctly, they shape the direction of the future. 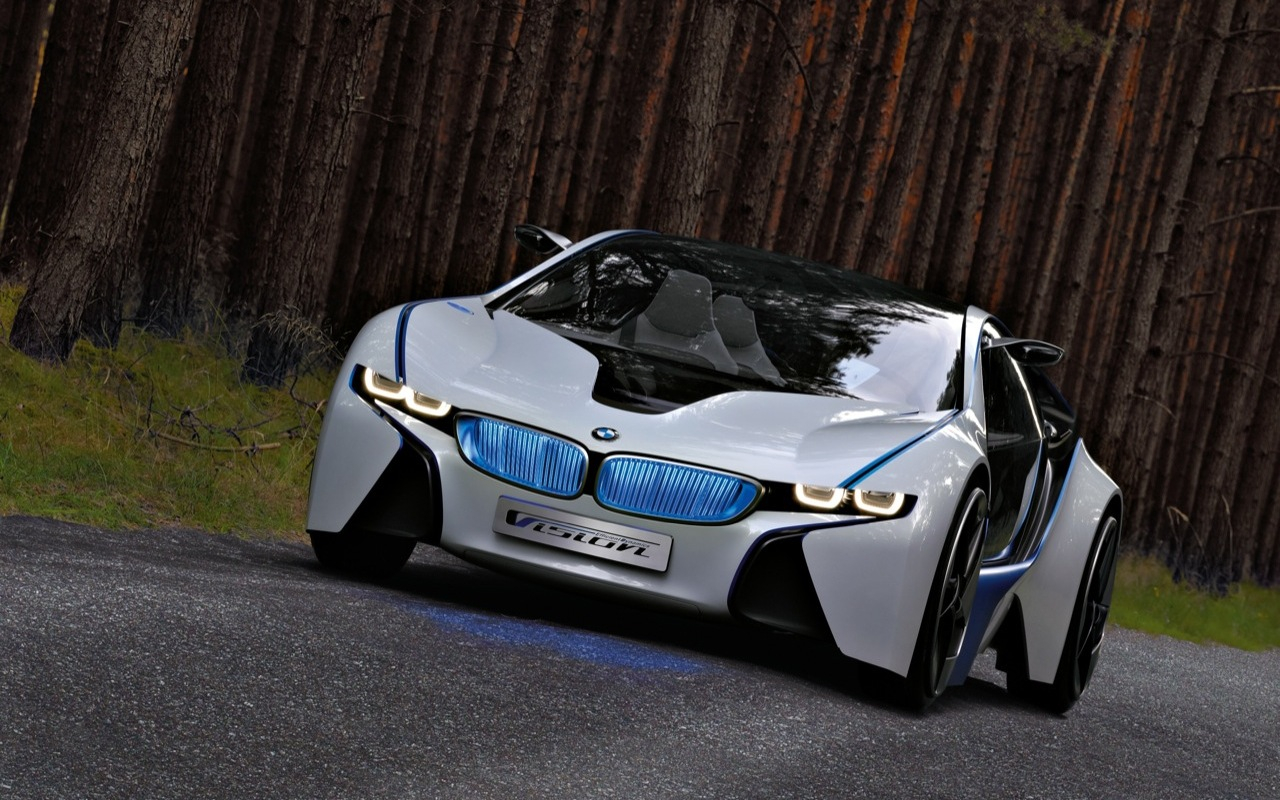 Modern variations of the concept car augment the obvious; faint bumps become augmented aggressive flares and different shapes provoke thoughtful emotion. A seemingly unnecessary detail is transformed into an exaggerated styling element. The best part about a change like this is that it is absolutely necessary. Getting the detail right is what sets ordinary apart from extraordinary. Concept cars capitalize on this in a much amplified way in order to shape the future of the auto industry. Such is evidenced in this modern interpretation of the 2000 CS: 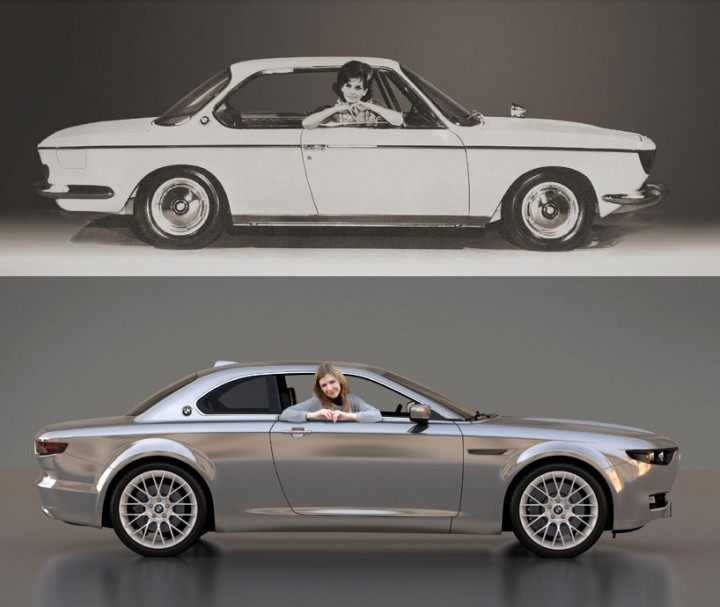 The concept car originated with this purpose, to publicize and capture the fascination of future car buyers after World War II, with radical new provocations. At that time, concept cars were loosely based off of production vehicles and built by independent shops.

Due to the additional cost and the assembly method of cars in the sixties, major manufacturers did not have a large role in the development of concept cars as we know them today. Instead, specialized coachbuilders, would deliver tailor-made cars to the major car makers and individual exclusive clientele. Companies such as Baur (known for its unique cabriolet-with-roof design) and Alpina modified BMWs in particular, while Bertone and Karmann worked on the assembly of new vehicles.

BMW had found a new niche in the automotive market with the 2000CS, which was the successor to the the Bertone designed 3200CS of 1962. Integrated front headlights; which was one of the main differences between the Bertone and BMW designs, defined this funky coupe.

Since this car was based on the Bertone 3200CS design and went on to sell over 11,000 examples in only four years, BMW decided to again reach out to Bertone. For those who don’t know, Bertone of the time, was an Italian styling and auto manufacturing group that specialized in a distinctive styling of automobiles.  In the seven years that had passed since the 3200CS was introduced, Bertone designed some of the most radical yet beautiful cars ever produced.The first of these was the Lamborghini Miura in 1966, which was a futuristic reinvention of the definition of a sports coupe. 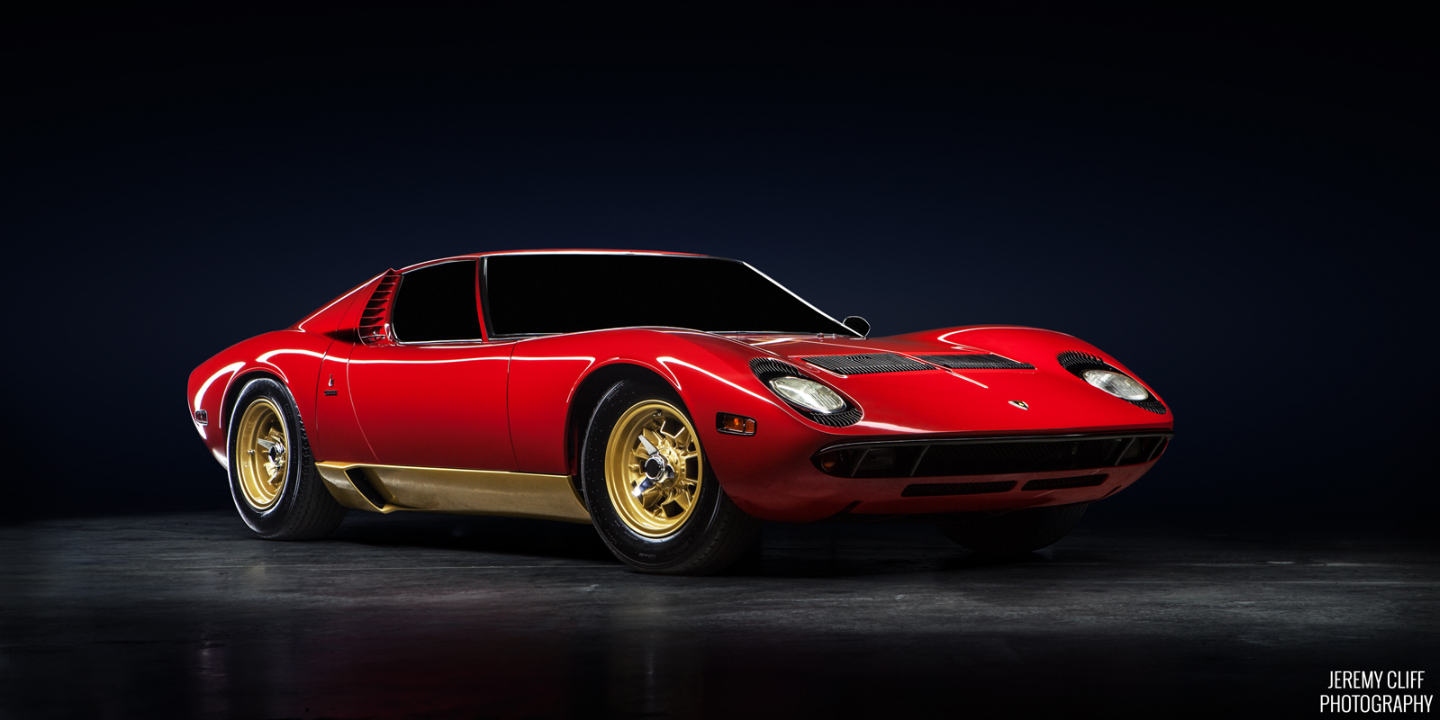 This car is thought to be the car that invented the idea of a two seater, mid-engined high performance sports car, and responsible for the radical designs of the later 60’s and early 70’s. Concept cars of this era were new ideas put on paper, and eventually made as a single prototype. The Lamborghini  Marzal of 1967 was the design that followed the Miura, and could easily be mistaken for an early DeLorean DMC-12 to the untrained eye. 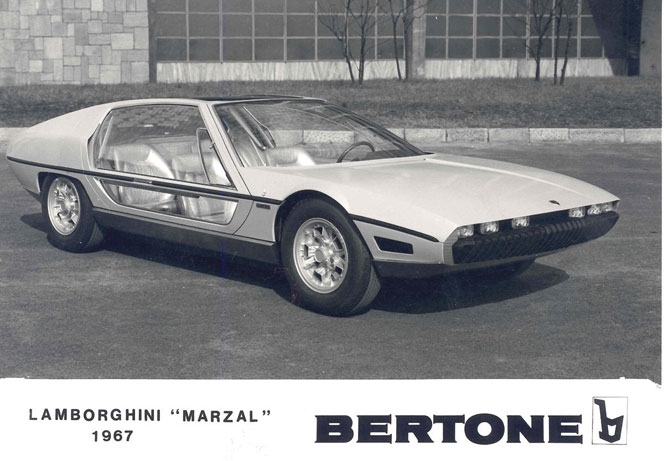 The major difference is that this vehicle was designed as a true four seater coupe. Only one was ever produced, but it has the famous Italian design cues that were so popular in the following years. 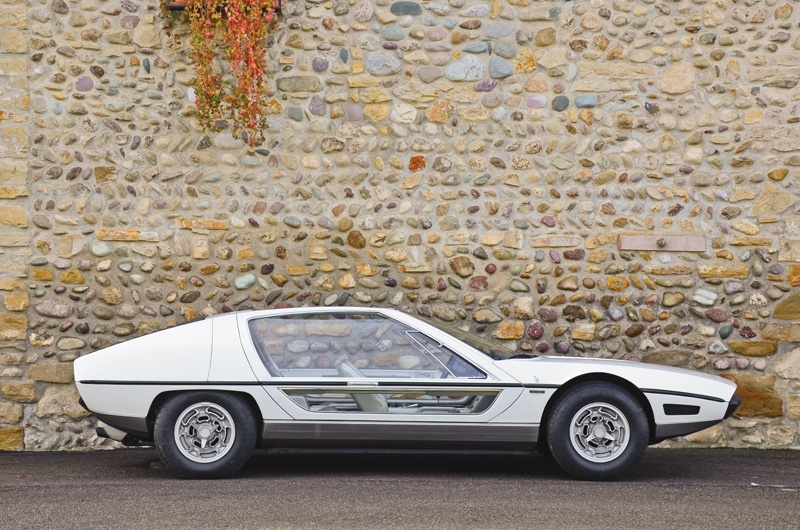 1968 featured the Alfa Romeo Carabo shown in the Paris Motor Show, based on the Tipo 33. It sat just 39 inches high and featured the scissor doors later used in the Lamborghini Countach. 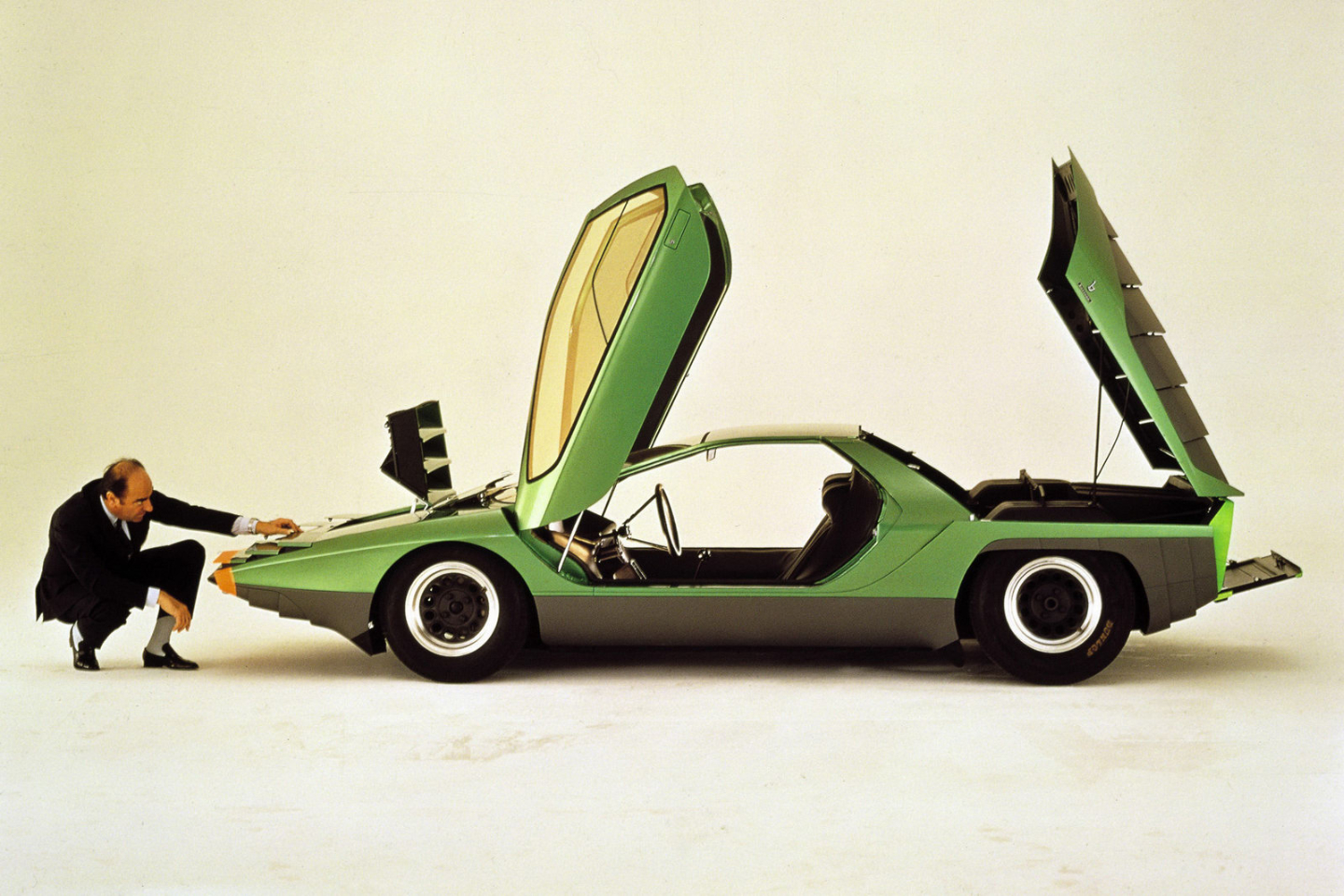 Looking at these three cars, it is no surprise that the new BMW concept designed by Bertone would be a sports coupe and be of ground breaking styling. Bertone had to base the design off of the new BMW 2500, or as the body style was later known, E3. This new car featured a 2.8 liter inline six, and was an elegant sport coupe. It and the E9 coupe, are both some of the most iconic body shapes produced by BMW. 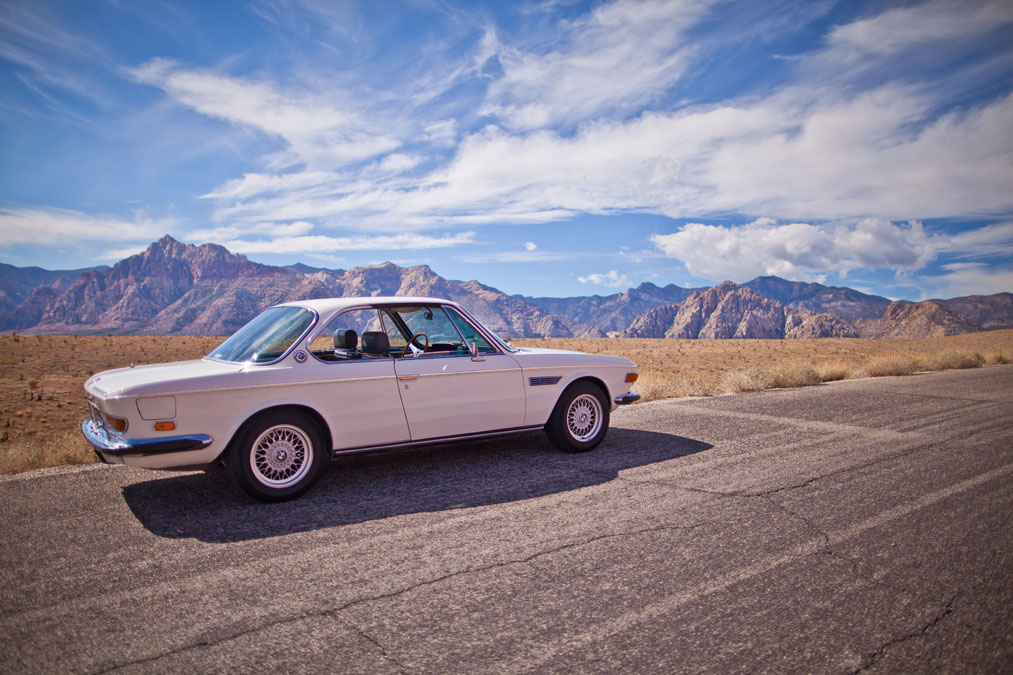 With the design lines stemming from the 1961 design, Bertone had to switch it up for the new late-60’s era. With the aid of designer Marcello Gandini, Bertone had a unique new idea to present to BMW, called the “Spicup.” Featuring a new retractable roof design, the hybrid was named after the typical Spider nomenclature for a topless roadster, and Coupe for two door sports car. 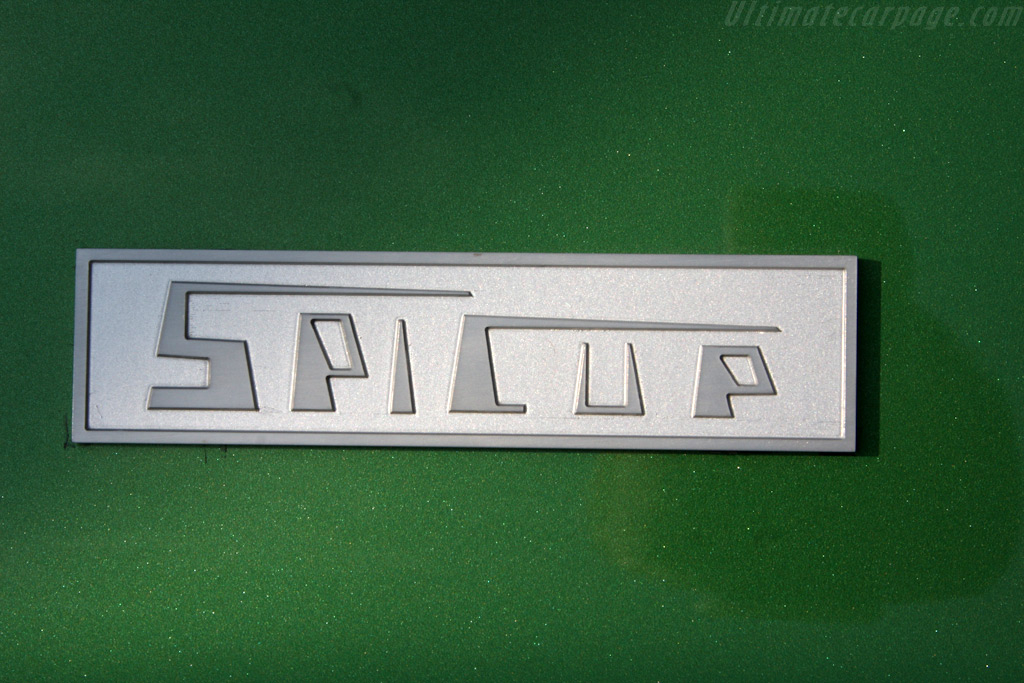 As with all concept cars, it had questionable styling, although one can appreciate the complete package as a new and unique idea. The 1969 BMW 2800 Spicup Coupe, as it came to be known, featured retractable stainless steel panels that could hide away in the stout rear rollbar. 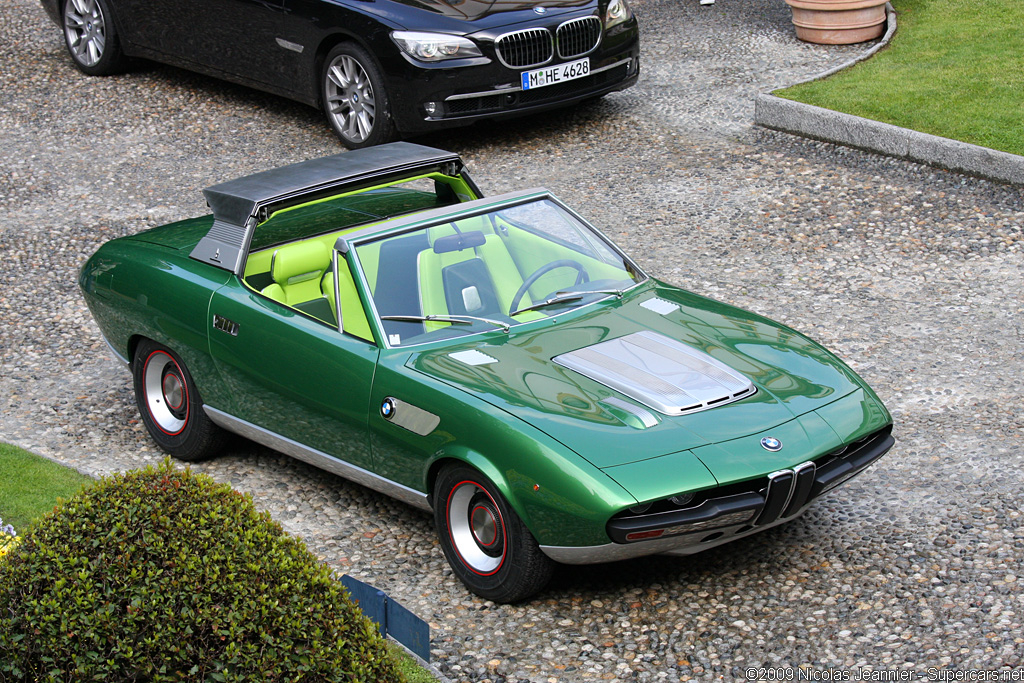 The Spicup looked like something out of the Jetson’s cartoon that first aired in 1962. Bertone describes that “The considerable dimensions of the mechanical components were handled by creating almost excessively fluid vertical lines. At the same time, the relatively important tail and wings (fenders) become the car’s focal point.” 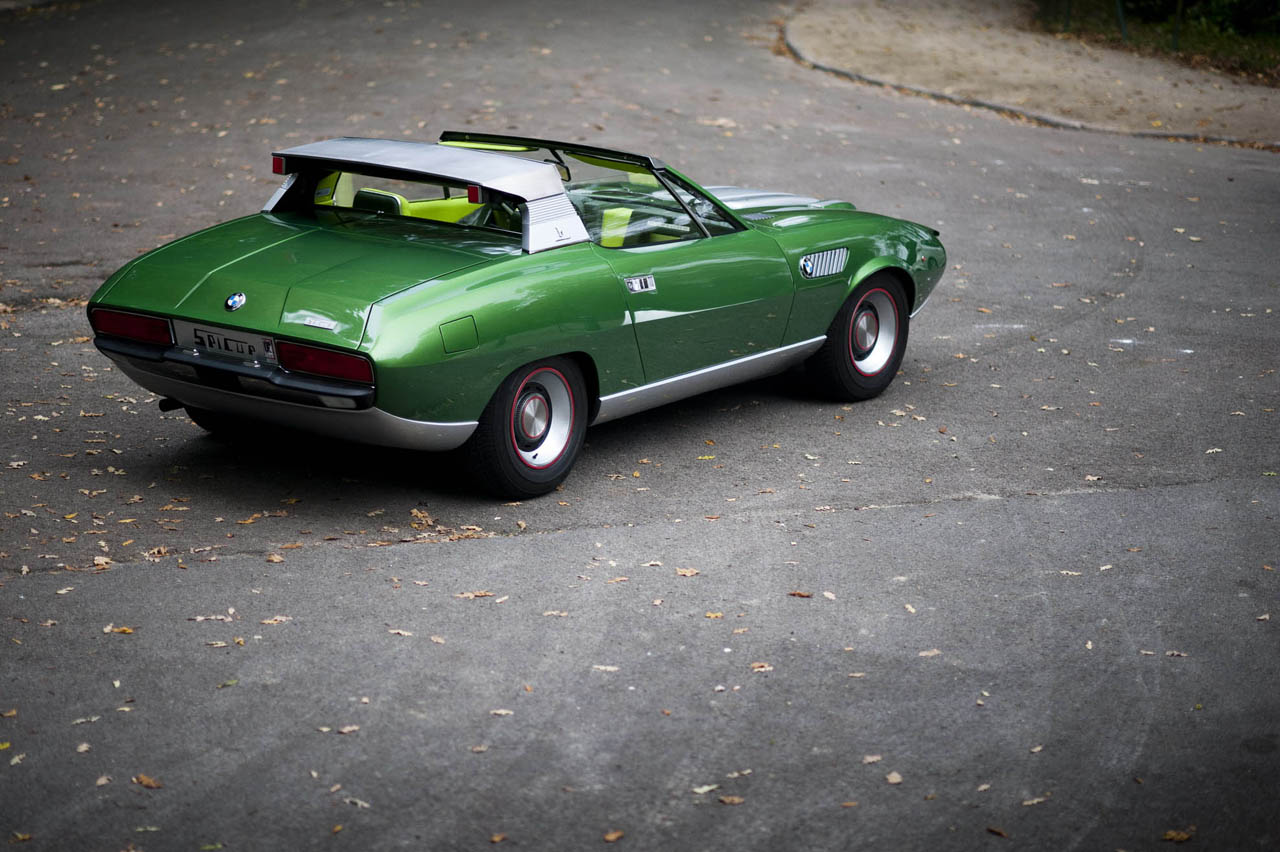 The rollbars had to satisfy a combination of safety needs and design criteria, and Bertone solved the problem with an automatic mechanism which also contained the elements for the transformation from spider to coupé and back again. The retractable parcels would be hidden completely when withdrawn. 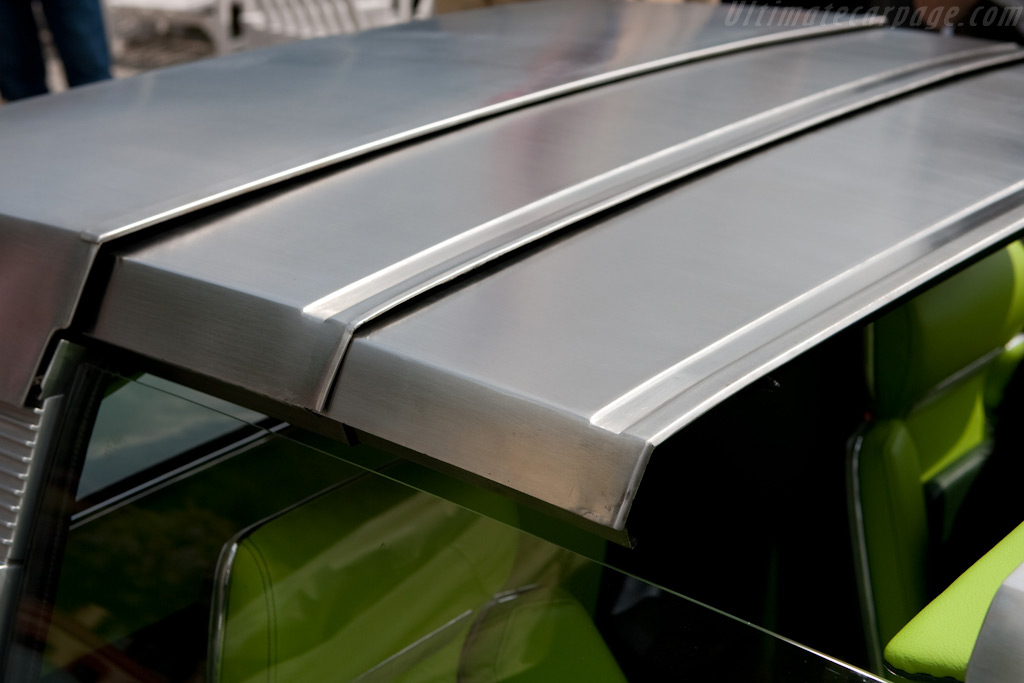 Bertone insignia’s are displayed proudly on the roll bar to signify the unique roof structure that must have been jaw dropping in 1969. 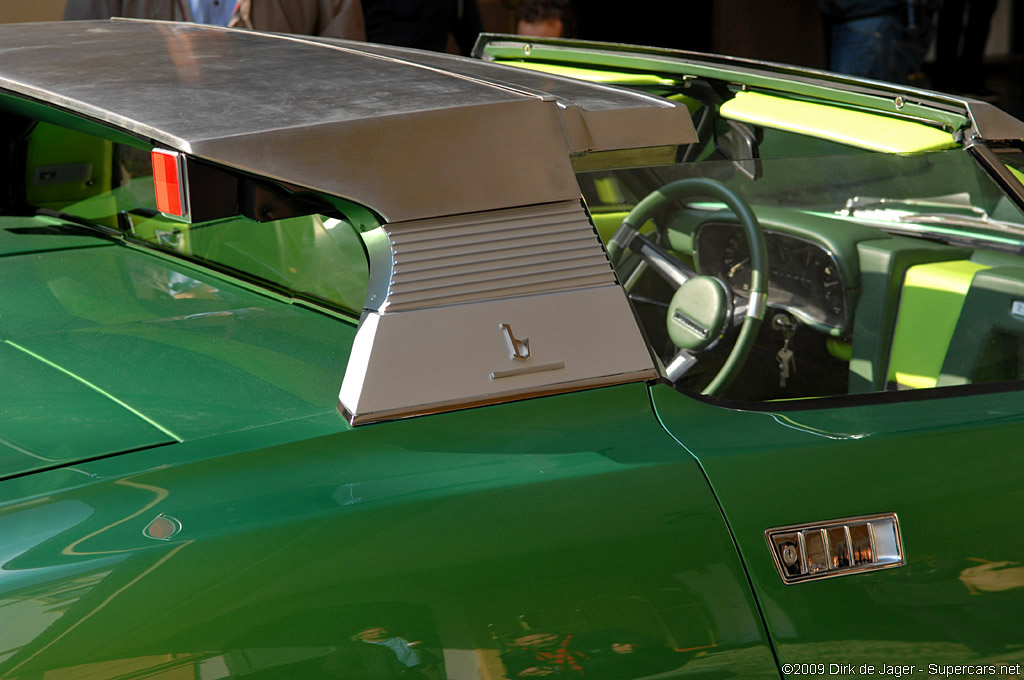 The rear of the roof gives the car a feeling of speed even while sitting still. When matched with the lack of trim or molding of any kind, this Bertone design is just as simple and elegant as the 3200CS. However, it did present more sporty and more futuristic when unveiled. 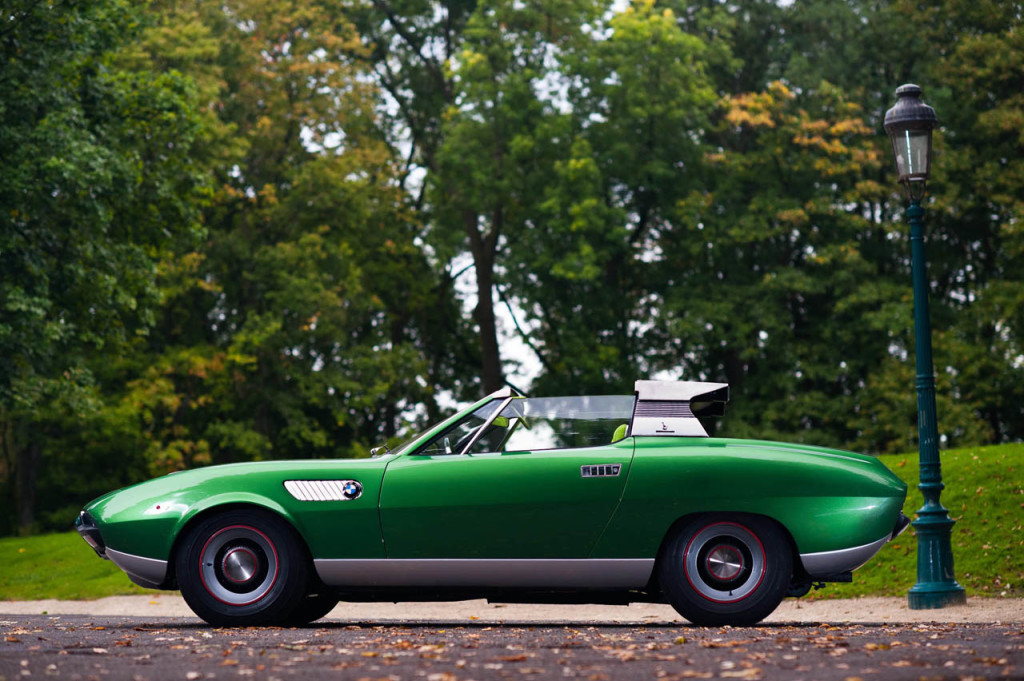 The Spicup had a shorter wheel base than that of the 2800 and was styled completely different than any other BMW of the time period. A power bulge placed atop the engine protrudes and emits the feeling of an American muscle car. Hidden front head lamps defined aggression on this cross breed. 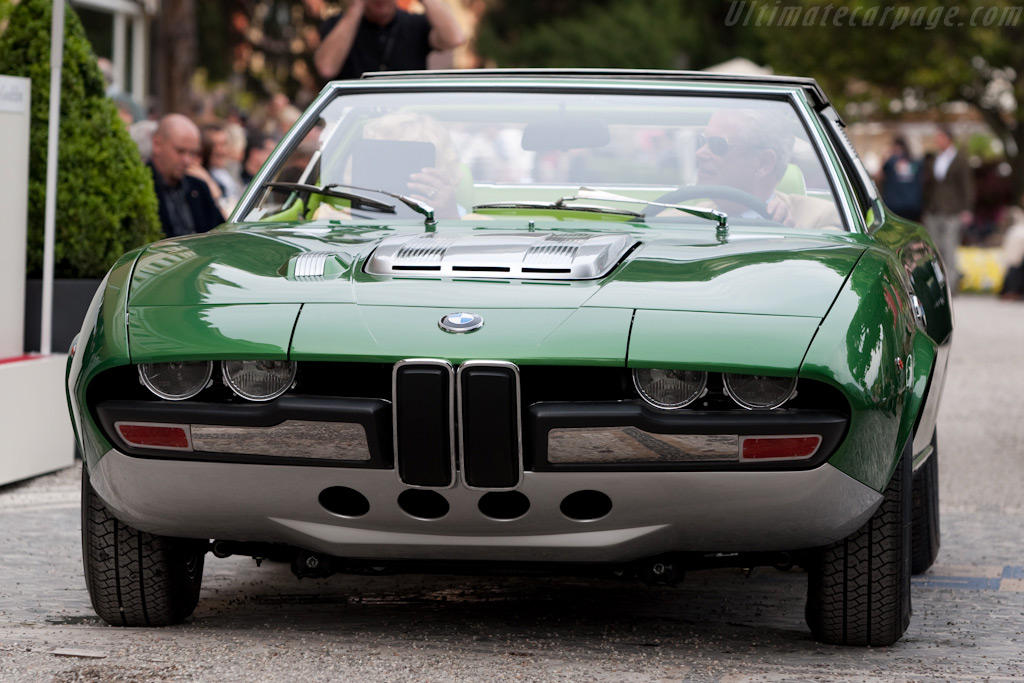 With a wedge shaped front end, no bumper deterred the lines of this vehicle. The unique looking front kidneys shout for attention at the same time. It is interesting to note that Bertone worked with a myriad of different automobile manufacturers to help design and produce vehicles. Many of the cars produced are visually recognizable between the multiple brands due to the distinctive styling. A perfect example of this is to compare the front end and overall shape of the Spicup to that of the 1968 Alfa Romeo Montreal  and Lamborghini Jarama (also designed by Gandini). 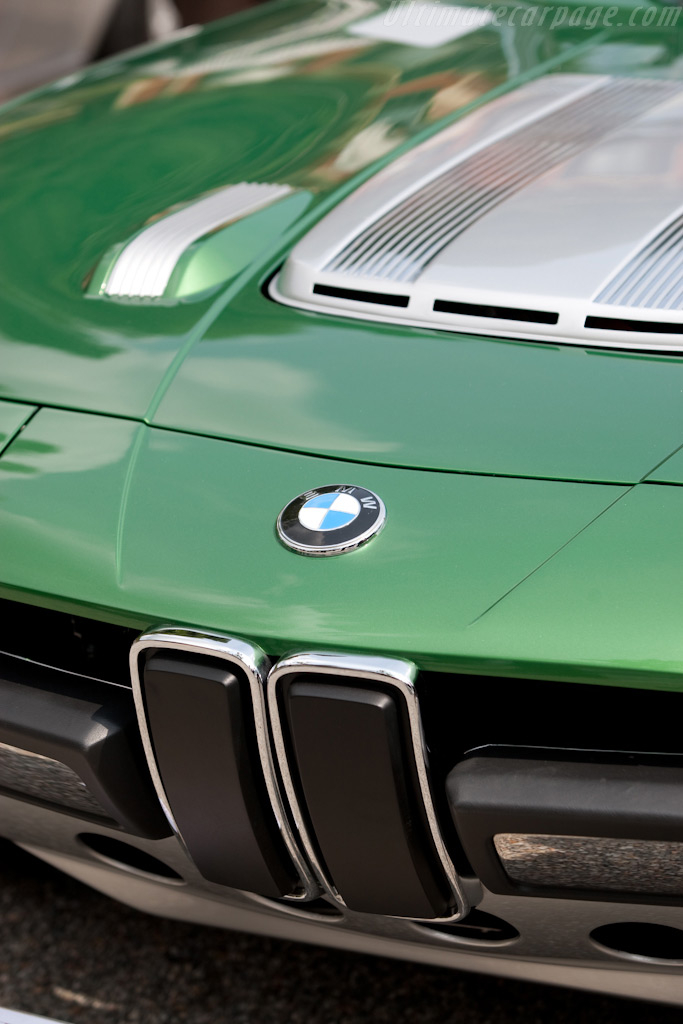 The engine bay was unique and futuristic, although an M30 can partially be seen lurking beneath in the engine bay. Other BMW specific items such as the brake fluid reservoir, wiper fluid reservoir, and air filter assembly ducts are evidence of the use of the BMW platform. Unlike some of today’s concept cars, this vehicle was actually made to be driven. Since the 1950s, development budgets were tight and one-off experimental cars like this were usually sold after the show period, just like a car from the production line. Such disposal was made possible by the fact that these early show cars were (more or less) normally functional, being largely based on the chassis and mechanical components of some existing model. 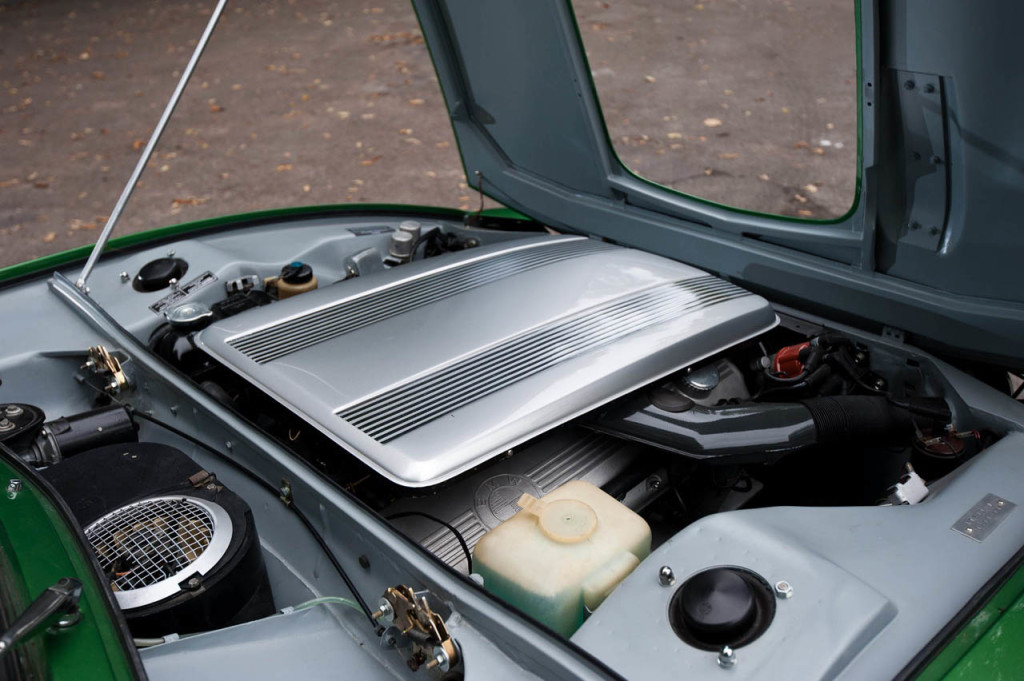 The BMW emblem placed on the front fender is also reminiscent of the styling of the famous 507 fender opening from a decade earlier. 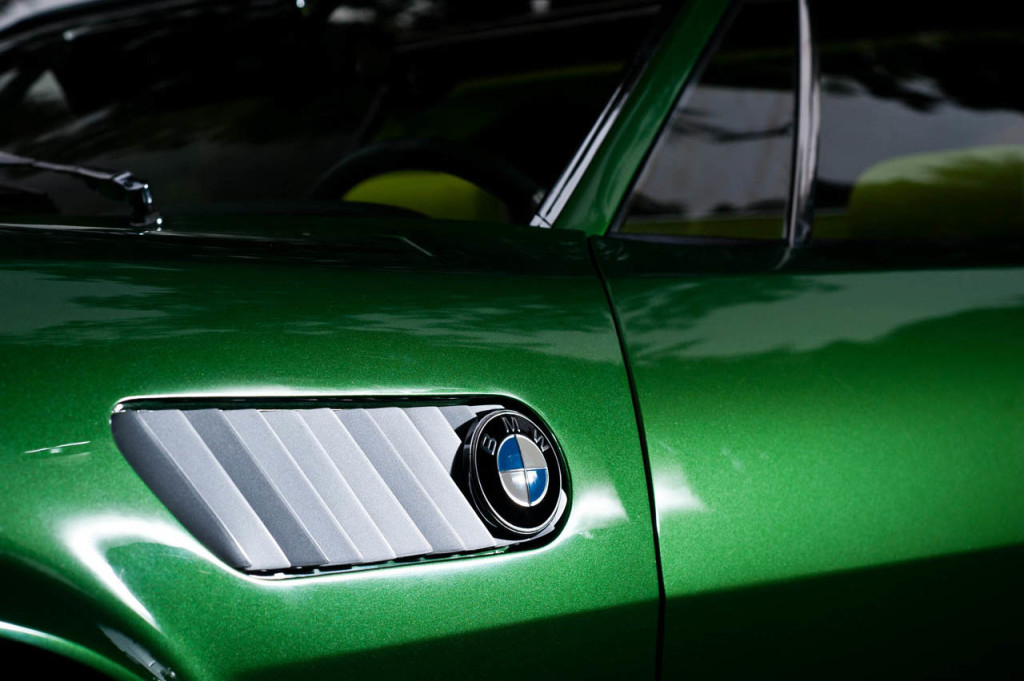 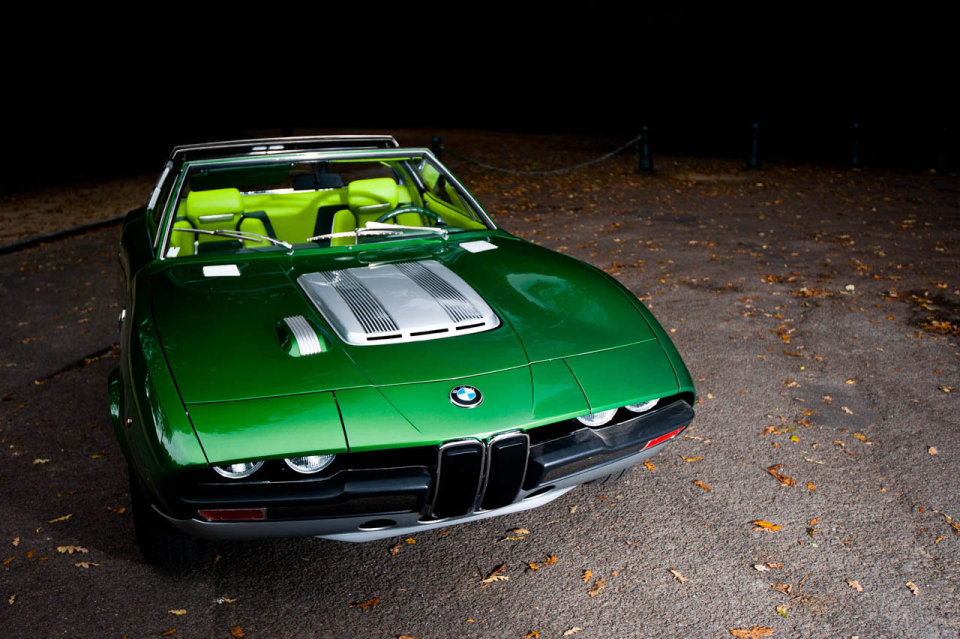 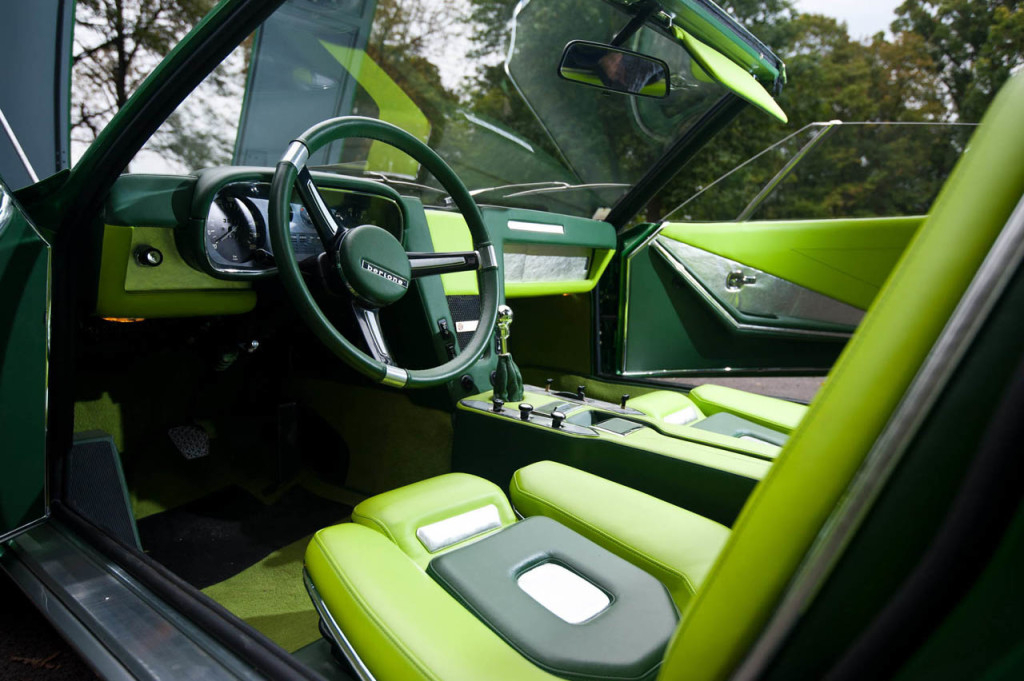 The gauge cluster makes it painfully obvious that this car was, indeed a BMW. These gauges (and pedals) are shared with the E3’s and E9’s of the time period. 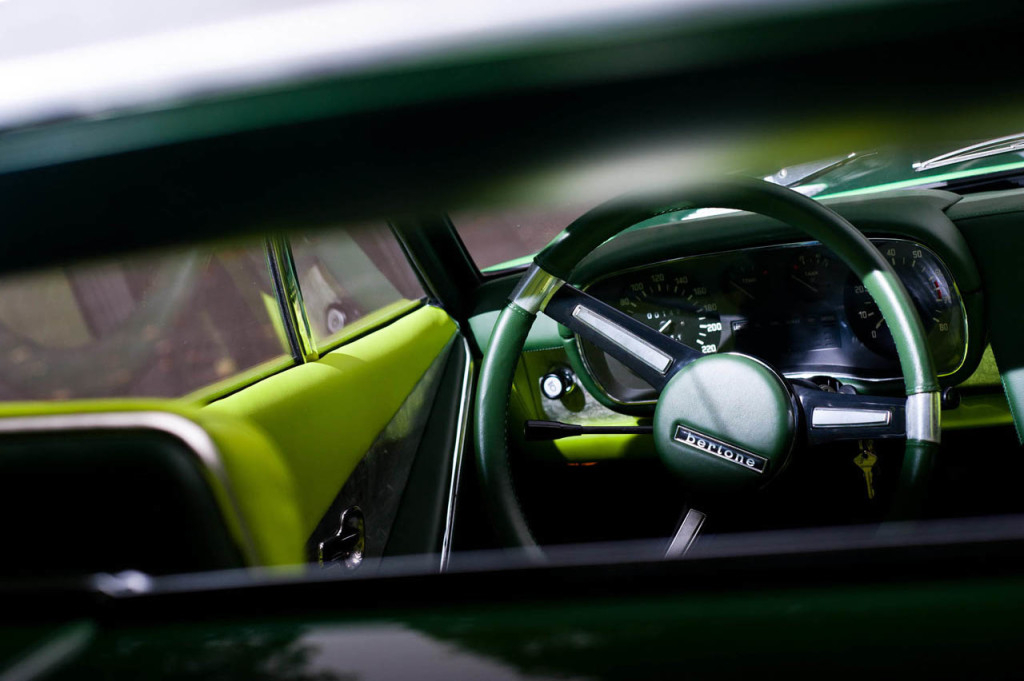 Cabin controls placed on the center console were a unique touch. The knobs and levers are all recogizable for those who are familiar with the BMW’s of the time period. 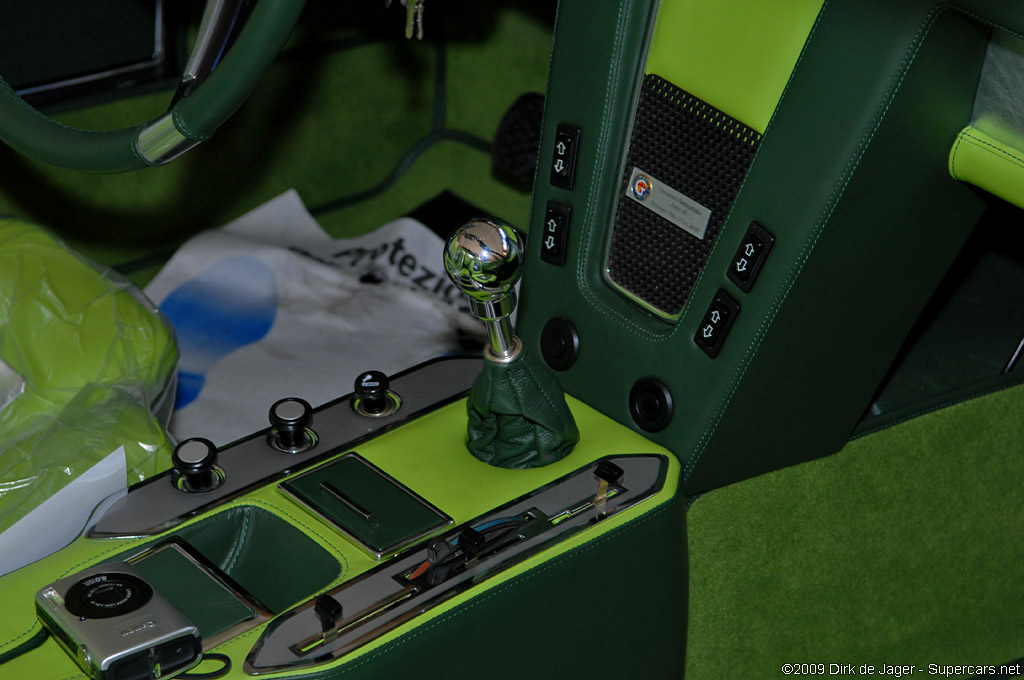 The Spicup wears the BMW badge with pride in the same way ‘Mater from Disney’s ‘Cars’ wears his rusty body and lack of a front hood. It is indisputably wrong… but also in a way, markedly fitting. 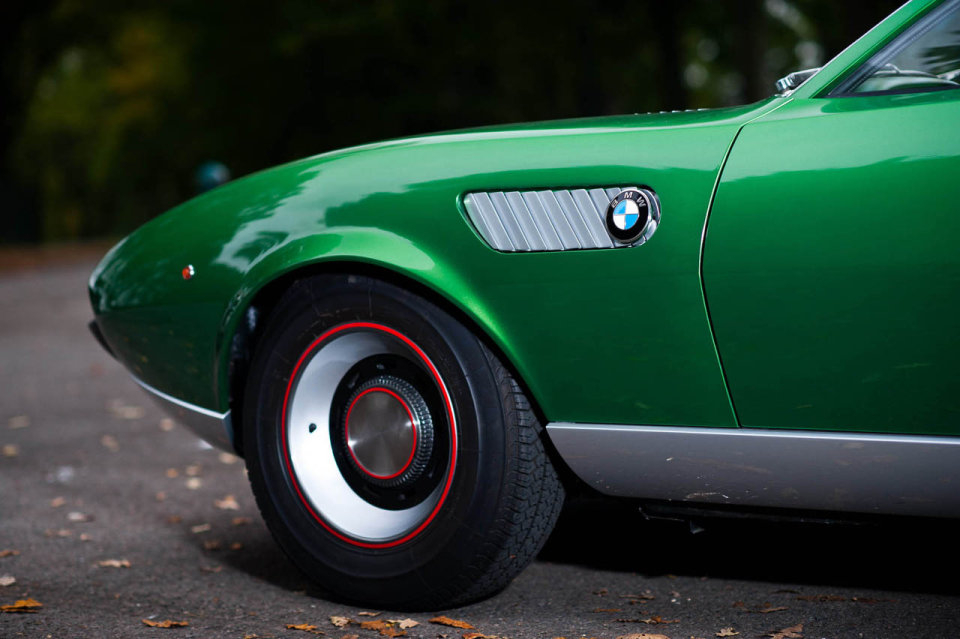 Unfortunately this unique design was not utilized by BMW. Even with the highlight design feature of the sliding roof, this Spicup was not destined for use as a production vehicle. Interestingly, it did influence the lines of Bertone’s Targa-top FIAT X1/9.  One can only ponder what BMW liked and disliked about this design to ultimately pull the plug. One of the best arguments is that it was totally out of place in BMW’s refined model line, and it lacked any sort of performance capability to attempt to launch it as a sports car. 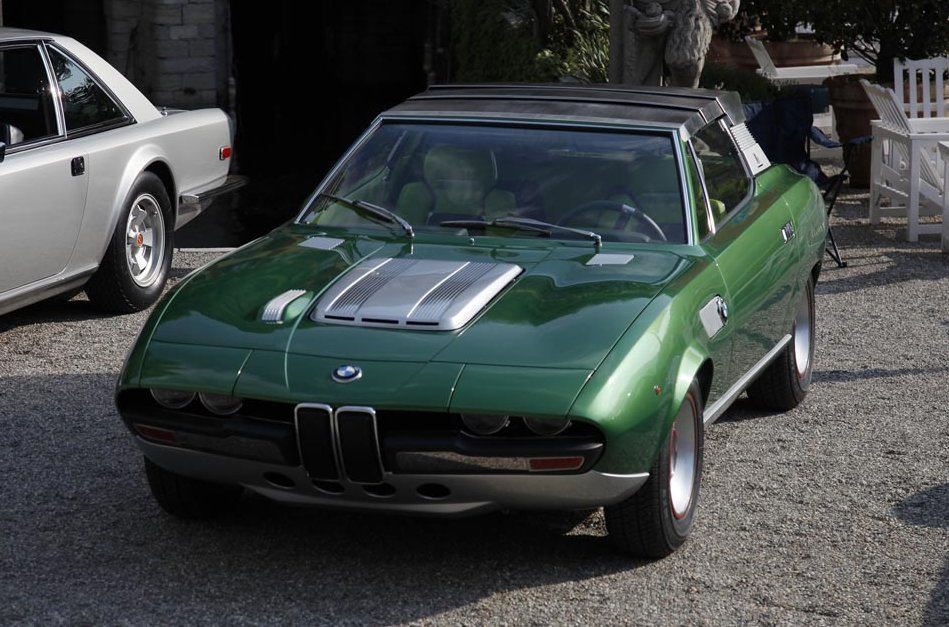 Having little to do with past or future BMWs, the company quickly sold the Spicup to an enthusiastic owner that racked up over 60,000 miles (100,000 kms) traveling constantly from the Netherlands to Germany. At some point the body was painted orange, the interior changed to black, and the engine cover was attached in unit with the hood. 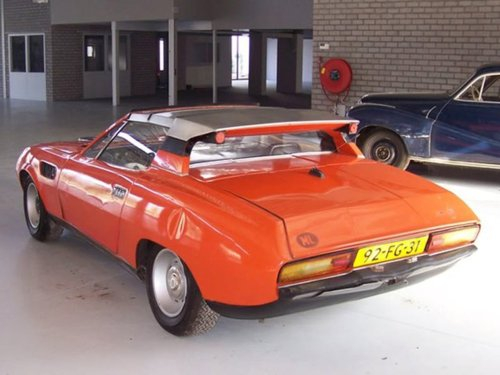 In recent times the Spicup was found by Paul Koot in the Netherlands. Tired, incomplete, scratched and dented, and with some serious signs of corrosion, the car was transported to Carrozzeria Granturismo in Milan for a complete restoration for Roland D’Ieteren of Belgium. In efforts to recreate this unique vehicle, the restoration group diligently searched for the original colors and materials by researching original documentation and pictures from the period. Specific parts remade to the exact original specifications are the steering wheel, Spicup emblems, interior trim and rear bumper. The original bumpers were made of wood and then coated, but obviously needed replacement. 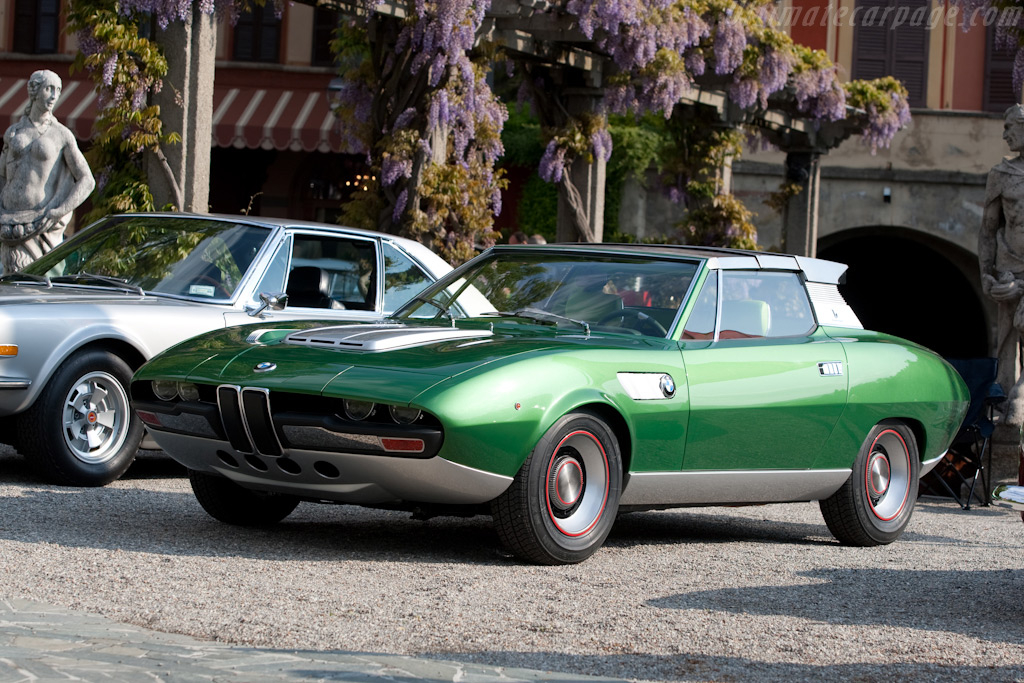 Painted its original hue of green with triple-tone interior, the Spicup made its debut at the 2009 Villa d’Este Concours with BMW as the acting sponsor. Subsequently, it was also presented at the BMW Museum in Munich during the summer of 2010. October 1, 2011 the Bertone Spicup Coupe prototype was auctioned off by Bonhams where it eventually sold for €460,000. Without doubt, the Spicup has turned a lot of heads during its outings, and forty years after its first appearance; it has not lost any of its charisma. 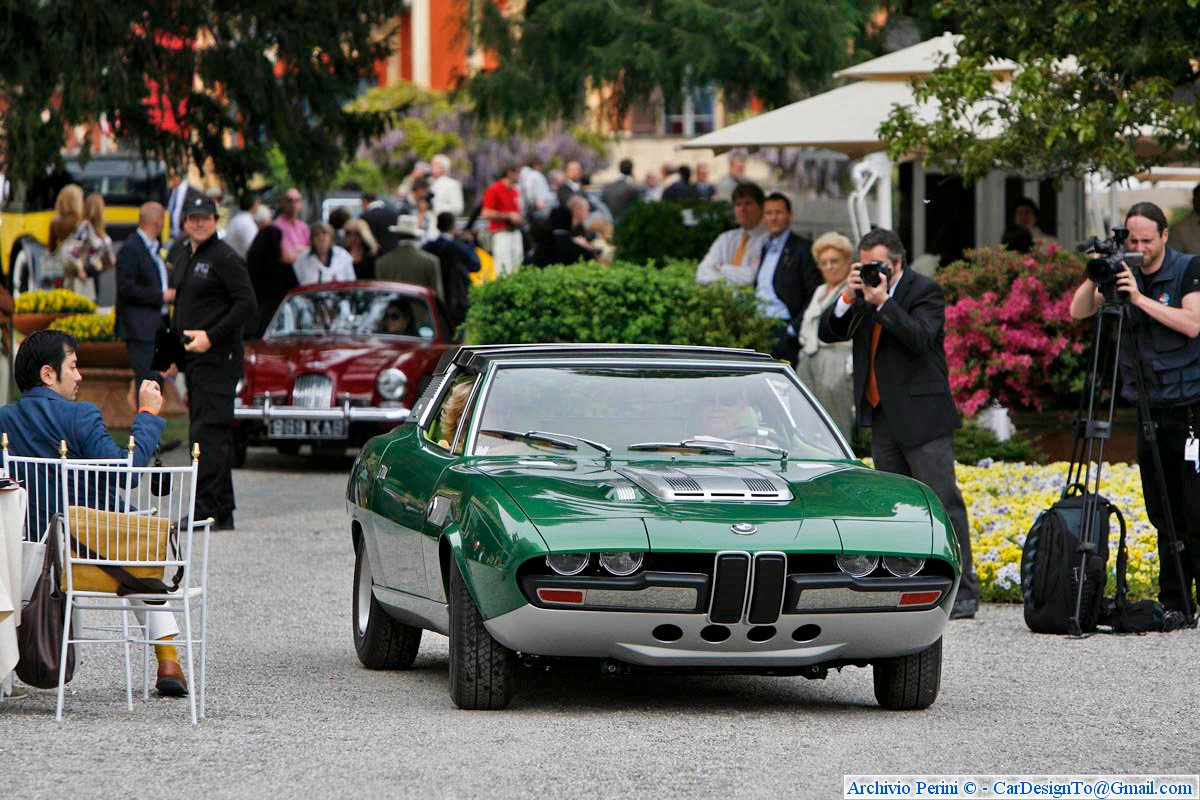 Putting the finishing touch to any total restoration project is always immensely satisfying. But in case of the Spicup, the return to its original splendor really offers an extra dimension. It brings back the feeling of Geneva ’69, the late 1960s, an era of unlimited possibilities, growth and promise. It reconfirms the essential value of a true concept car: to inspire, provoke, evoke emotions and offer a glimpse of the future. 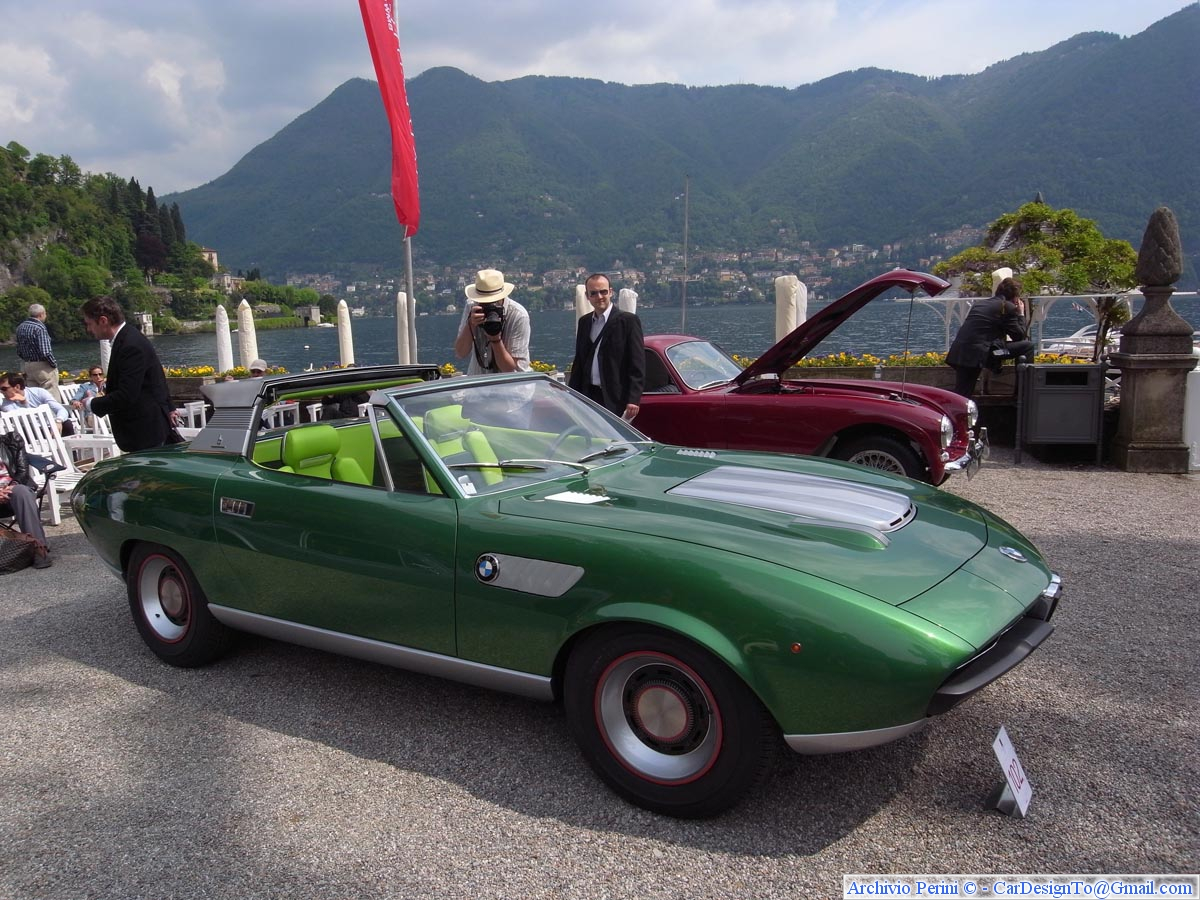 While every effort has been made to render as accurate as possible details regarding the history of these cars, inaccuracies may have occurred. Please help us fix these inaccuracies by replying in the comments section.