Perhaps I am biased (as I own two e30’s), but the BMW econoboxes of the eighties may be some of the best cars ever built. This era brought together everything there was to love about automobiling. Electronic fuel injection changed the game. ABS and steering wheel airbags added just the right amount of safety to a car without detracting from the views around an A-pillar or ruining the fun on a snowy day.

The major components are still mechanical but electric sensors enhance the ability of the engine to make more power and be more efficient. Modern cars don’t even have dip sticks; I guess you have to be the dipstick to buy that vehicle. OK, I know e60 M5’s don’t have them either and they are pretty cool. Regardless, it is not wonder the e30 m3 skyrocketing in popularity — and price. But this article is not about the e30 m3, it is about it’s lesser known Italian brother; the 320iS.

Collectors circle the E30 M3 like beak-licking Falcons soaring above a plump, white rabbit. The M3 is butch and brash and moans one of the sexiest words in the world: homologation. But it is not the best E30 to drive. All those sexy augmentations weigh the car down, like silicone DDs giving a woman back problems. That plump white Rabbit has a Delphin Grey sister that shares the same S14 engine as the M3 but weighs an astonishing 242 pounds less. Her formal name is 320is, which shamefully fails to acknowledge the legitimacy of her M-ness. So she prefers to travel under her nickname, the “Italian M3,” like Maria Shriver referring to herself as a Kennedy in order to get a corner table. And after traveling with her through Europe, and driving up the California coast, I prefer the vivacity and athleticism of the 320is to the more superficial charms of her famous big sister, the M3. 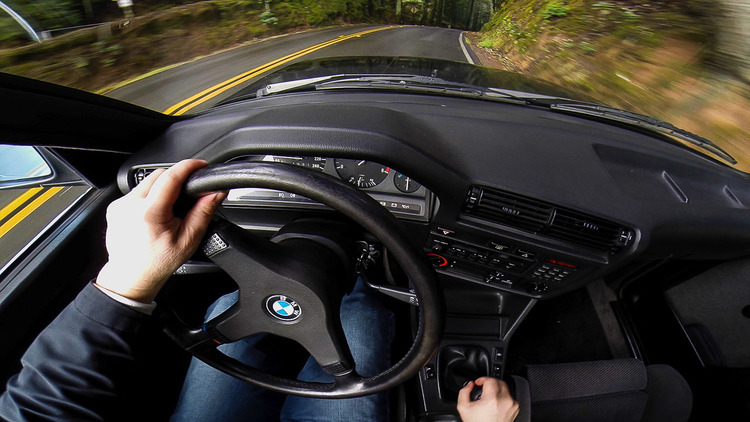 There once was a King named Faisal, who ruled a sea of sand atop a sea of oil. In 1973 he funded a pincer attack on Israel during Yom Kippur. It was a blitzkrieg success for three days, but then Israel, with the help of the West, counterattacked to victory. The king, furious in his humiliation, put both hands around our pipeline and choked the economy–until we were thumbing open 12 percent mortgage bills while waiting in alternate-day gas lines. The United States responded with an economical 55 mph speed limit. The Italians and Portuguese applied a shirk ray of taxation on engines larger than 2 liters, in an attempt to get them in symmetry with their oil supply.

BMW had a problem. Luigis were walking into Milanese BMW dealerships with $45,000 looking for an M3, but stormed out yelling, “nessuno mi lufungulo’” after hearing that they would have to pay an additional $9000 in tax because it was .3 liters over the limit. 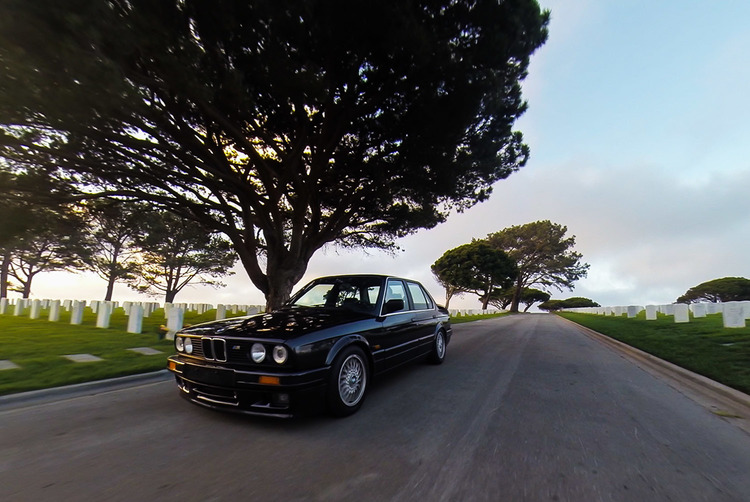 Most of the time, when Eurocrats spew mercantilist goo, it gums up the works. But every once in a while, the strange distortive effects of regulation shart a hope diamond, or a four-door S14 that weighs 242 pounds less than an M3. 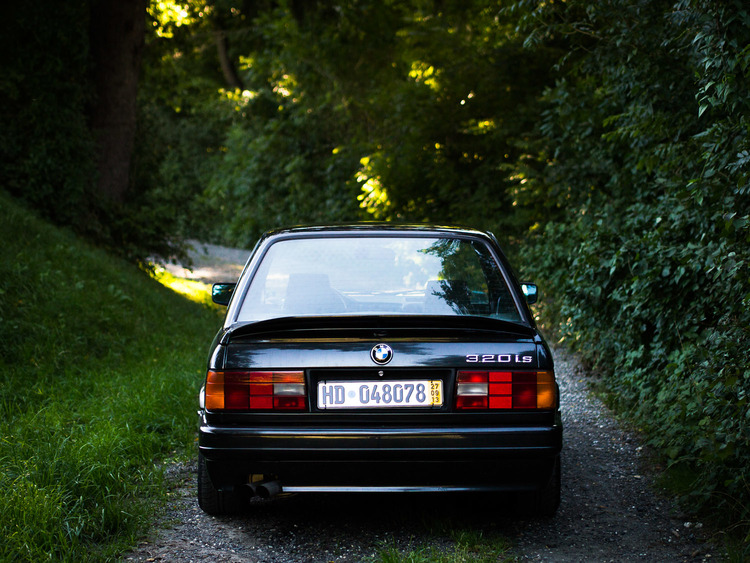 BMW went to Paul Rosche, who designed all the early Motorsport engines and asked him to de-stroke his S14 engine from the M3 to down to 2 liters. Rosche shortened the crank (72.6 vs 84), lengthened the rods, and fitted headers from a rally car, which resulted in an engine that only makes 3 horsepower less than the 2.3 (192 vs 195) and 15 fewer ft/lb of torque (155 vs 170). They connected it to a shorter differential (3.46 vs 3.25), so it would accelerate harder, and only offered it with a dogleg, close-ratio gearbox, to better keep it in it’s rev range. It was fitted with individual throttle plates, machined intake and exhaust ports, and a crankshaft with eight counterweights. 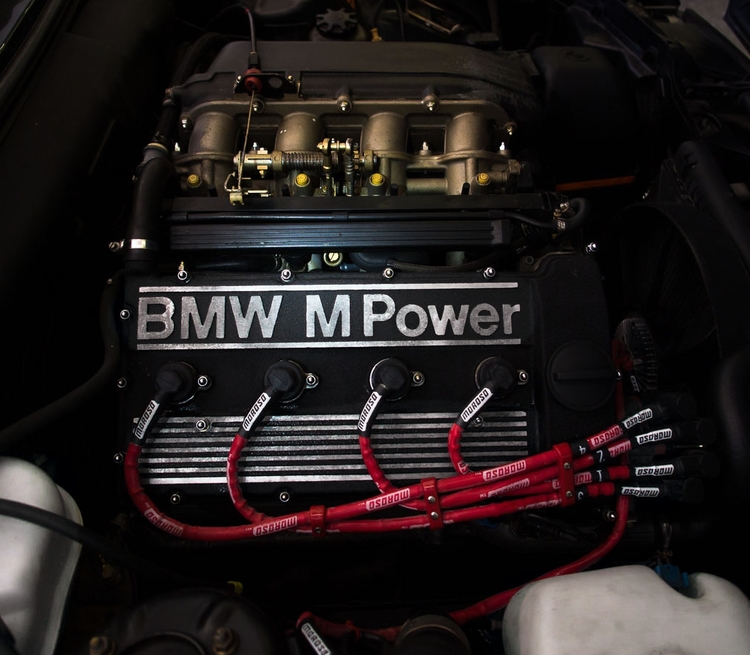 Roche’s masterpiece. The 2 liter version of the S14 is as rare as it is revvy.

You know when you are driving a special engine. It is not about horsepower; turbos have that. It’s not about torque; ask any truck. A special engine channels its magic from the god of Charisma, like an MGM contract movie star. They don’t walk into the room any faster than anyone else, but you could watch them do it over and over again. Every time I start the 320is, I smile. It’s like waking up a randy lover who slept the night. You are greeted with enthusiasm.

The Italian M3 is the most eager car I have ever driven. It’s like a puppy dog at the beach who keeps charging into the surf to retrieve a ball. You throw it into sharper and sharper corners until you think it will give up, but it just slides on through them with the ball clenched sloppily in its mouth.

Off the line, the smooth clutch engages a light flywheel; the shifter tugs backward like the head of a Arabian pulled by a sharp bit. Everything has frisson: the steering, throttle, shifter and seat. It’s a car on cocaine at Studio 54.

The genius move was dropping the S14 it into the lightest E30 chassis they could find.

The US M3 was 2865 pounds and the 320is was only 2623 pounds. So the 320is weighs an astonishing 242 pounds less. This means that the 320is has 7.3 percent better power to weight and suffers only a de minimis 0.4 percent drop in torque to weight. This weight difference is about the same as between a Porsche 964 and 964RS, making the 320is the most Rennsport version of the E30.

When the German car magazine Auto Motor Und Sport tested the 320is against the M3 they wrote, “The bigger engine actually has less power in the lower rpm range. A fourth gear run from 40 to 100 kph took  the M3 13.6 seconds but the 320is only took 12.8.” They said the 2 liter engine revved more smoothly and finished the article by writing, “Less is indeed more.” 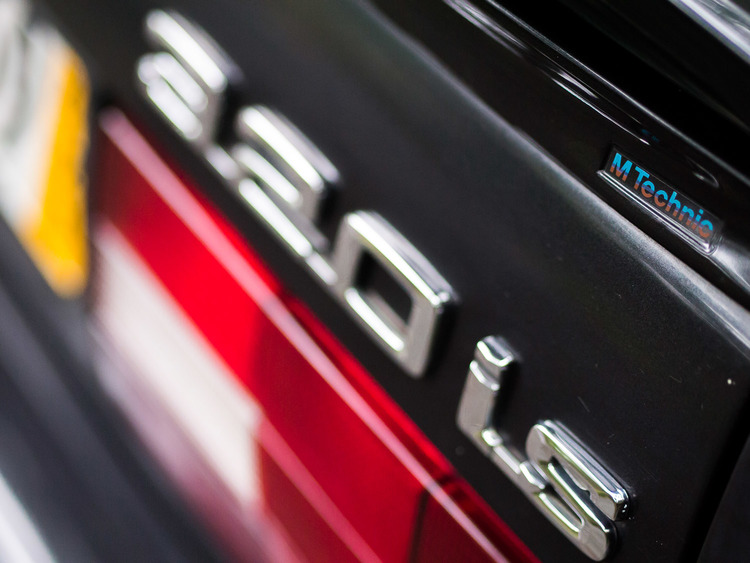 The 320is is not just more powerful. Removing 242 pounds of weight doesn’t just improve the power, it improves every dynamic ability. The Italian M3 handles and stops better than an M3. This is even more important to the character of the Italian M3 than it’s superior power. The car changes direction as if you were blowing on a feather. That lightweight, hand-built S14 is humping the firewall, leaving a huge gap to the radiator, like somebody made a mistake. This moves the center of mass inward, like an ice skater pulling in their extremities to accelerate the spin into a blur.

Or as Auto Motor Und Sport wrote, “The 320is reacts to the slightest steering action more willing than the M3, appears to be handling better, but also demands more attention from its driver than the good-natured and understeering M3.” 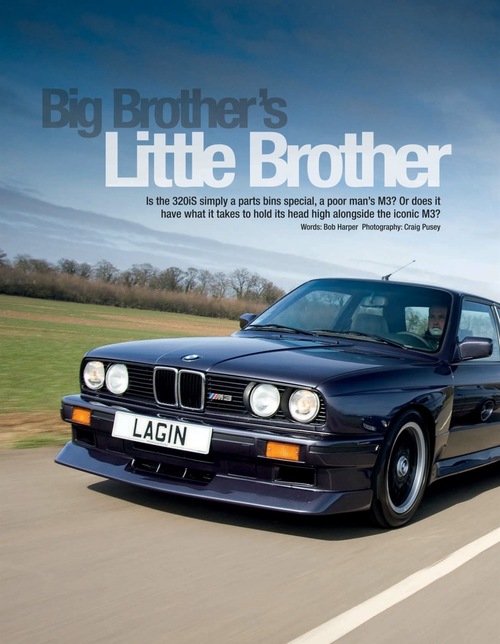 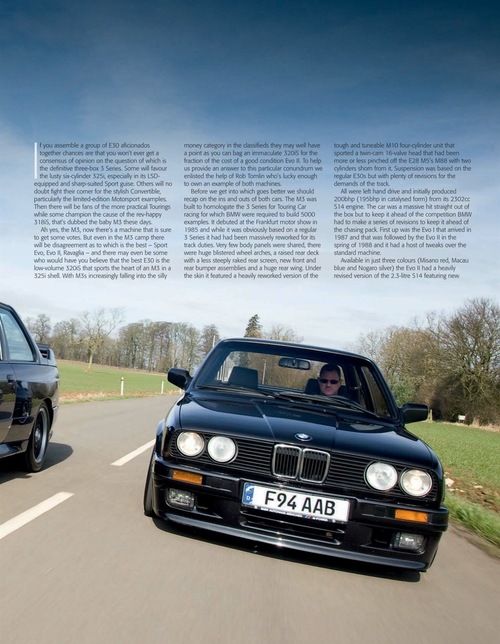 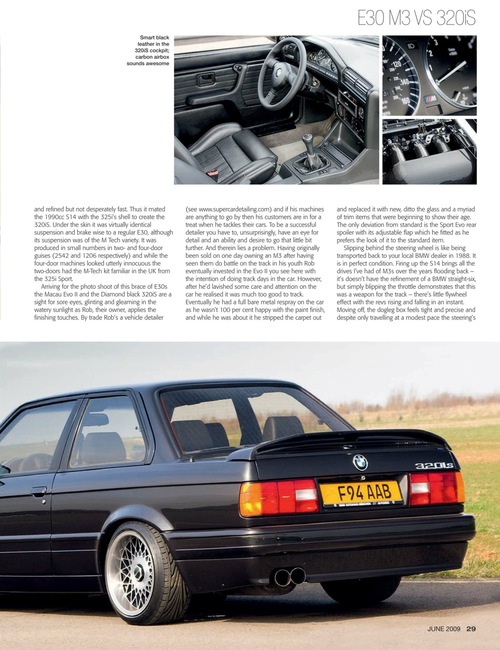 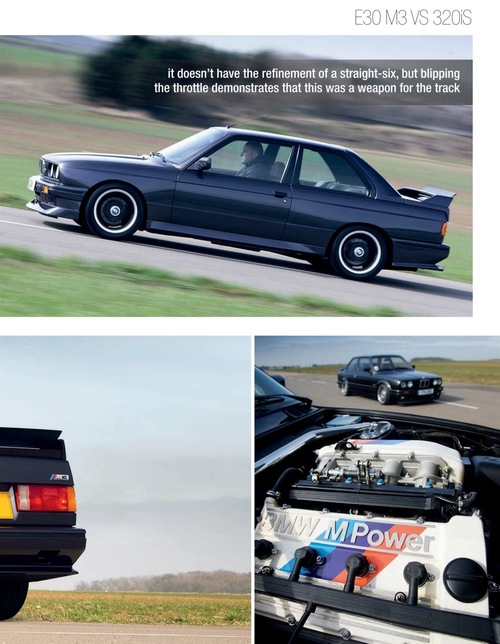 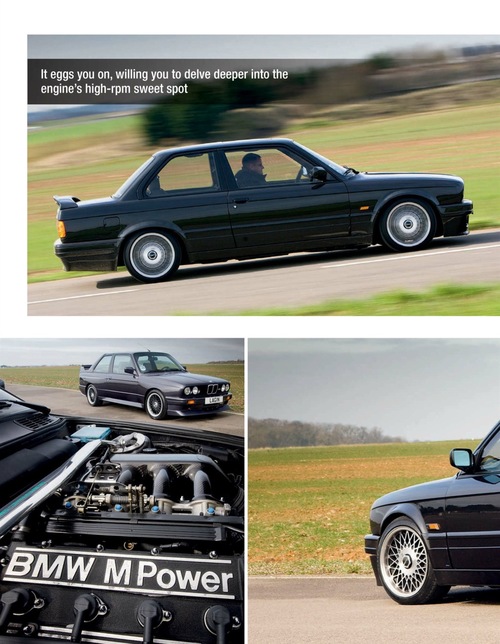 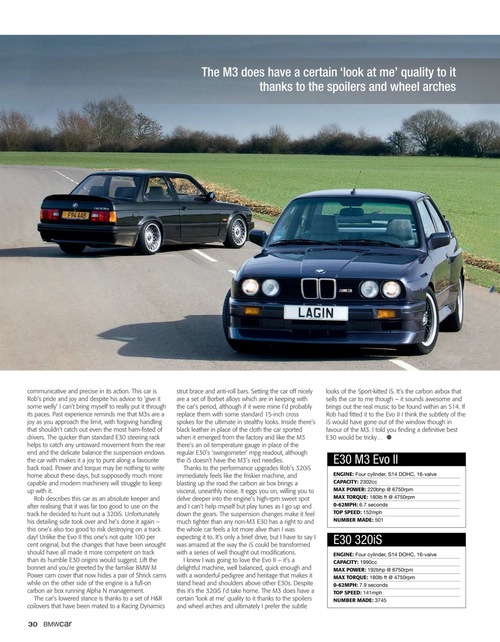 I got into early M cars about 12 years ago when I got my wife an E28 M5 and myself an E30 M3, and would like to think of myself as a knowledgeable BMW enthusiast. But I had no idea that the 320is existed until late last year when a deer took out my wife’s Mercedes 190e 2.3-16. I had to replace her car but there was no way I would find another Cosworth as good as hers and the US versions were a little anemic anyway. So I looked through the M Registryand found something even cooler, a four-door M3.

Nobody knows what it is. It’s the ultimate four-door, family stealth car. If you prefer to peacock in a Lamborghini, it’s not your car. But if you are the kind of guy who wears a white gold Submariner and de-badges his cars, you have found Nirvana. 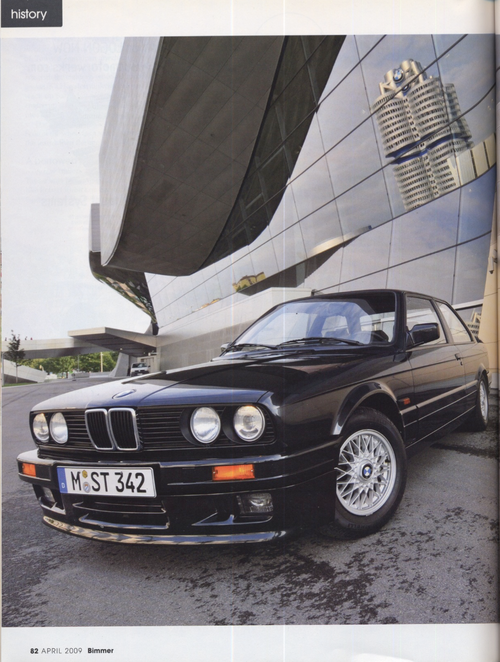 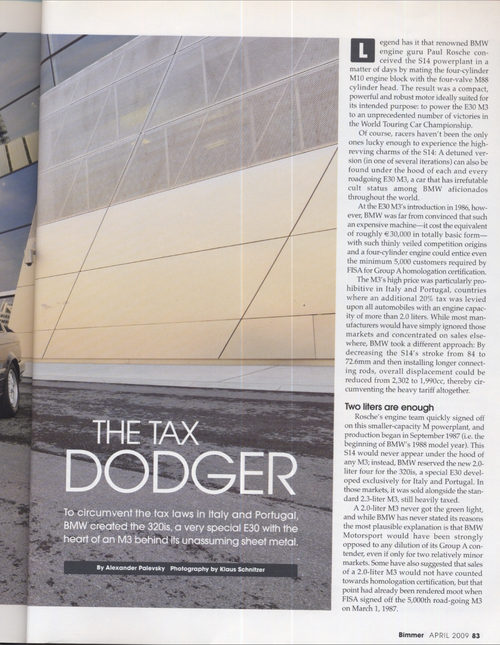 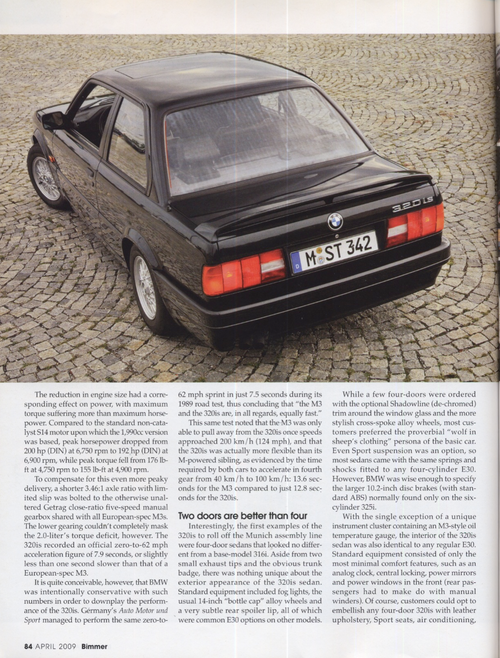 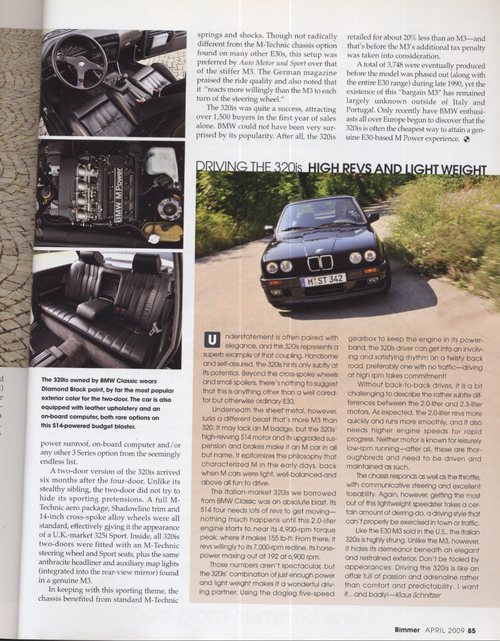 Bimmer Magazine tested the 320is in 2009 and wrote,” Like the E30 M3 sold in the US, the Italian 320is is highly strung. But unlike the M3, however, it hides its demeanor beneath an elegant and restrained exterior. Don’t be fooled by appearances: driving the 320is is like an affair fueled by passion and adrenaline. I want it, and badly!”

There were 18,843 E30 M3s produced. But only 1205 320is four-doors, and 2540 coupes. I spoke with Alex Palevsky, who curates the M Registry and co-authored the story in Bimmer. “I don’t know of any other 320is in the United States. I think it is a car for a very specific person; someone who understands that this is a special and unique car and the car doesn’t have to shout about it. It’s a car for someone who wants a total sleeper.”

As I drove the car up the coast, its dexterity gave me confidence to the push the 80s limits. You rip through the tightly spaced gears, shifting at redline, felling a surge of energy course through your body all out of proportion to the acceleration. You press the firm brake pedal into the meat of its range and the car decelerates as hard at it accelerates.  And then, it laterally accelerates into a corner. You drive the 15 inch front rubber to its lightly chirping limit and adjust your line with the accelerator. Oversteer is available with either lift off or excessive throttle, but there is an organic reversion to neutrality, so you are pointed down the straight on exit. 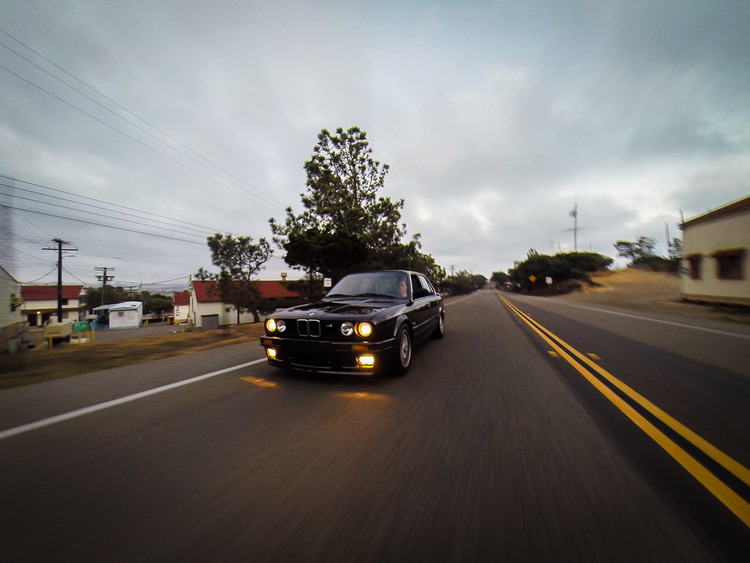 All this takes place in a cockpit that was designed at the pinnacle of German quality. The Euro-terior is superior. Cloth sport seats grip you better. Black window winders hang like earrings from the Anthracite cloth door cards. Even though the car is 26 years old, it is squeak free. The plastics are handsomely textured. The instruments are paradigms of clarity, and offer the S14 specific, oil temperature gauge to let you know when the engine is properly warmed.

The glovebox is without any pneumatic struts and isn’t three inches thick. But it probably weighs a fraction of the one in a modern 3 series. An onboard computer expresses itself in large red digits, like an early digital watch. There is room for two adults or three kids in the back, unless you fold down the rear armrest to pass your skis through. The M-Tech 1 steering wheel is gracefully shaped and endowed with an extraordinary amount of feel. 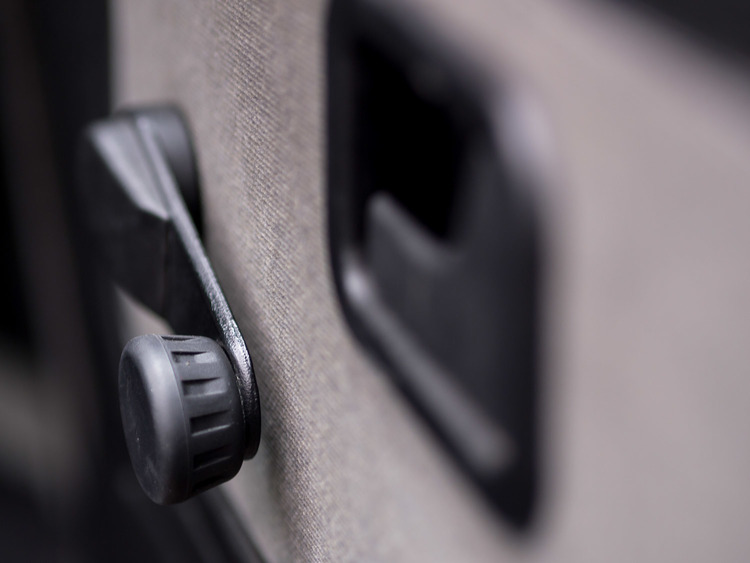 The factory M-Tech 2 body kit offers front and rear spoilers, side-skirts, and door moldings, which contribute to a look that is halfway between the austerity of a base E30 and the flamboyance of an M3. It looks special but in a reserved way, like a hand stitched lapel, or working buttons on the cuff of a Savile Row suit.

Pavlevsky later told me that, “You got so lucky; 97 percent of the four-doors were base. No sport seats, a four-spoke plastic steering wheel. And the M-Tech 2 body kit is incredibly rare on a four-door, even though yours was added later, it is very had to find. Your’s is a freak.”

And that is what the Italian M3 feels like, a super-freak at a Berlusconi Bunga-Bunga party who willingly takes on five passengers, squeals around corners, and likes being whipped to redline. 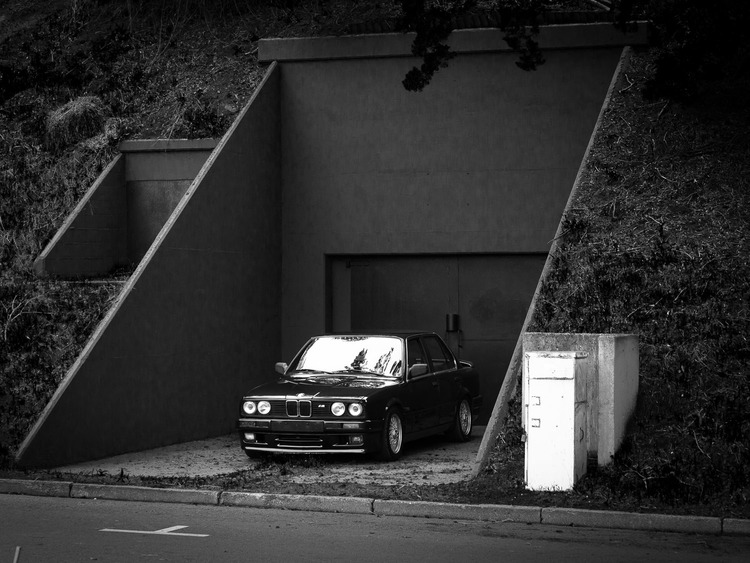 Of course with this car likely being the only one in the country, it is going to be available for a limited few when it goes up for sale once again. Until then, the rest of us can only lust after it.